This website requires certain cookies to work and uses other cookies to help you have the best experience. By visiting this website, certain cookies have already been set, which you may delete and block. By closing this message or continuing to use our site, you agree to the use of cookies. Visit our updated privacy and cookie policy to learn more.
Home » MIT Site 4 by NADAAA with Perkins&Will
ProjectsArchitectural TechnologyArchitect Continuing EducationBuildings by TypeCollege and University Projects

MIT Site 4 by NADAAA with Perkins&Will

The new MIT high-rise is easily picked out from the other buildings in Cambridge’s burgeoning tech and life-sciences hub of Kendall Square. From the Boston side of the Charles River, its copper-toned sheathing catches the eye: glinting in the sunlight, it appears to be subtly shifting. But though the 29-story building stands out, it has a less-than-distinctive name, referred to by the client, the Massachusetts Institute of Technology (MIT), simply as “Site 4.” 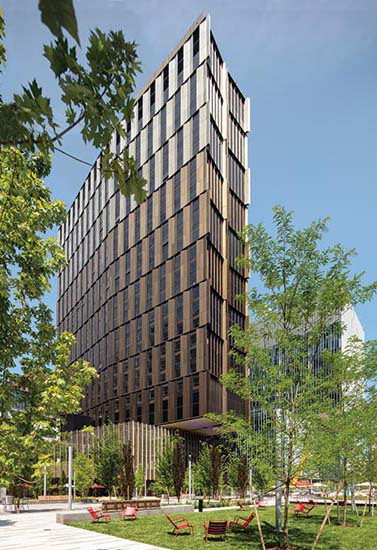 Site 4 houses a varied program and an unusual number of components, of which the lozenge-shaped tower—containing 454 studio to two-bedroom apartments for graduate students—is the most prominent part. Yet the housing is merely a “subchapter,” says Nader Tehrani, principal of Boston-based NADAAA, architect for Site 4 with the local office of Perkins&Will. In addition to the flat-plate concrete high-rise, which cantilevers over a steel-and-concrete framed podium, the project also incorporates the adaptive reuse of two century-old warehouses—remnants of Kendall Square’s not-so-distant industrial past. The interconnected assemblage provides amenities that cater to residents, including group study and social spaces, an exercise studio, and a day-care center open to the wider MIT community. It also houses university programs, such as an innovation and entrepreneurship hub, several sustainability initiatives, and the admissions office, which features a 200-seat auditorium. Other Site 4 elements are intended to engage Kendall Square residents and workers, including a food court and retail spaces. 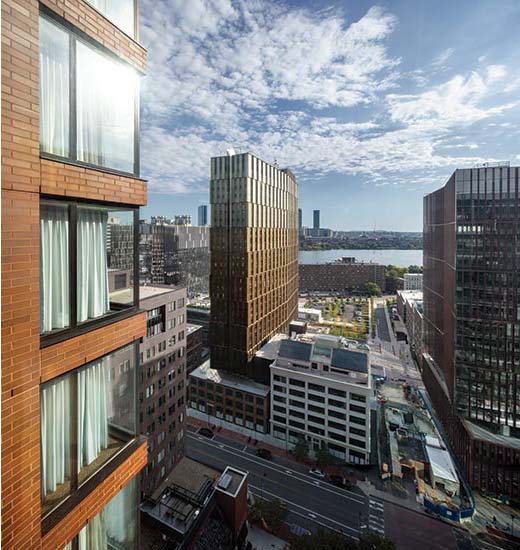 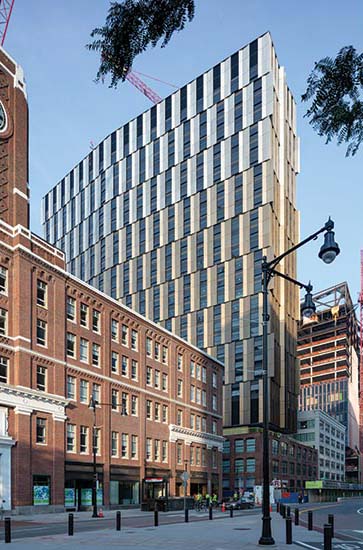 But beyond its programmatic elements, there is another aspect to the project—one that is arguably more significant: Site 4 is part of a larger master-planning effort to expand the MIT campus eastward, deeper into Kendall Square. Here, on land that was a collection of parking lots, the university is building approximately 1.8 million square feet of residential, academic, research, and commercial space in six buildings, and a series of interconnected outdoor spaces. 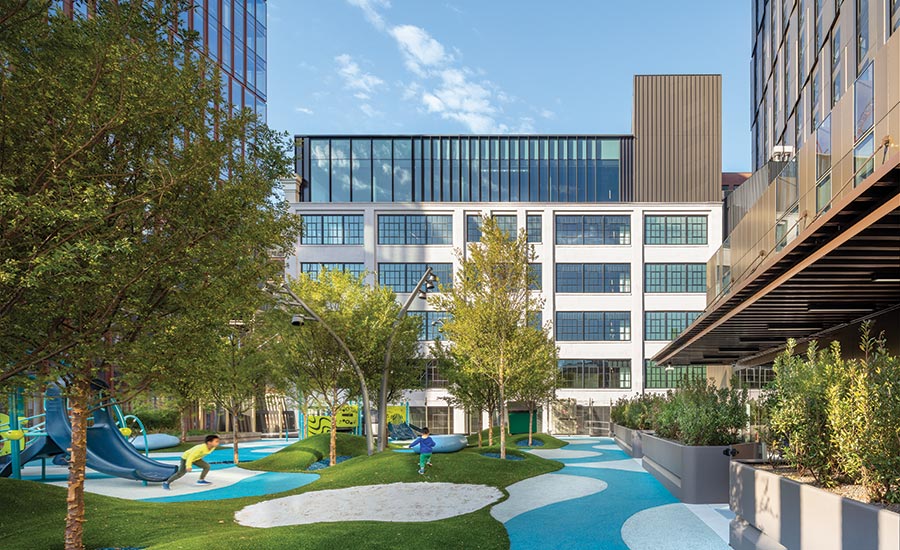 A sheltered playground for Site 4’s day-care center sits atop the podium’s roof.

MIT envisions this emerging district as a new gateway to campus, with Site 4 as the anchor. Tehrani points out that the tower sits on axis with the school’s “infinite corridor,” an 820-foot-long, above- and below-ground hallway that runs through the university’s main buildings. Under a separate contract, NADAAA and Perkins&Will have also designed a more literal gateway—a new headhouse for the Kendall Square Red Line subway stop, now under construction next to Site 4.

As Cambridge’s tallest building (at least for now), Site 4’s tower is visible from several points on campus and especially along Main Street—a primary east–west route leading to the Longfellow Bridge and Boston beyond. With a few deft moves, the architects have given the tower a skin that is worthy of this prominence, creating a unitized glass-and-aluminum curtain wall with an unusual level of refinement. It reads as though it has been fabricated in three-floor sections (a reference to the triple-decker, the ubiquitous Cambridge housing type, says Tehrani). In actuality, due to transportation constraints, the enclosure has been fabricated in horizontal units, 10 feet high and up to 29 feet long, and brought to the site complete with glazing installed.

Within each three-story curtain-wall section, vertical bands of glazing and aluminum panels alternate, and are staggered relative to the section below. The arrangement creates the illusion of movement, enhanced by the use of different colors for the panels—from dark bronze near the base, where the shaft emerges from the podium, to a light copper where the tower meets the sky. Vertical creases in the aluminum make shadows, further emphasizing the variation, while the panels’ knife-blade edges, which pull a few inches away from the glazing, establish a “thinness and crispness” that expresses the non-load-bearing nature of the skin, points out Tehrani. The sum of all these moves serves to dematerialize the building, and at the same time distinguish it. 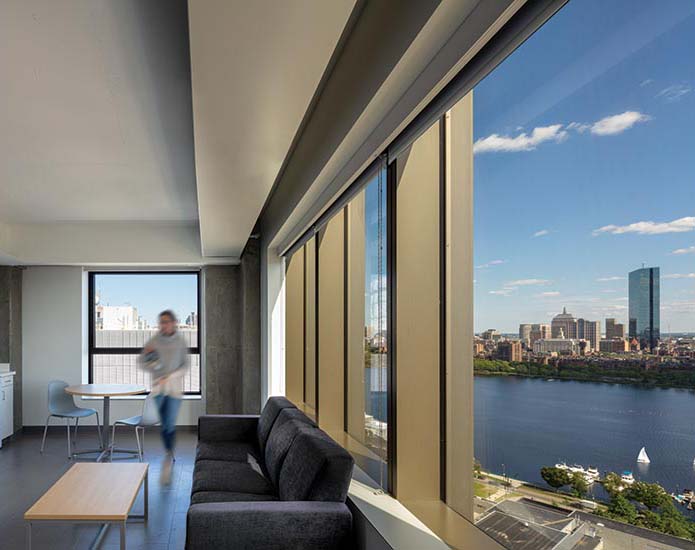 For the tower’s interiors, the team has taken a more no-nonsense approach. In the residential common spaces within the podium, many of which overlook a new landscaped quad to the south, concrete slabs have been largely left exposed and then polished as the finished floors. Mechanical systems are only partially concealed, camouflaged above maple-plywood ceiling baffles. The design strategy is also highly practical on the floors above, but with a more domestic feel within the units. Here a 7-foot 6-inch dropped ceiling covers a portion of each apartment, enclosing the mechanical services. But the living spaces open up, with 9-foot ceiling heights at the windows, making the most of daylight and views. 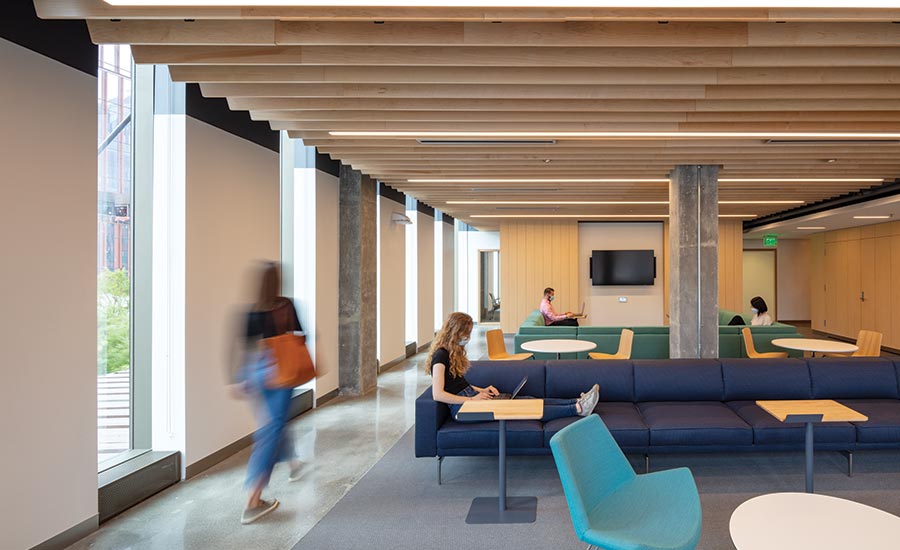 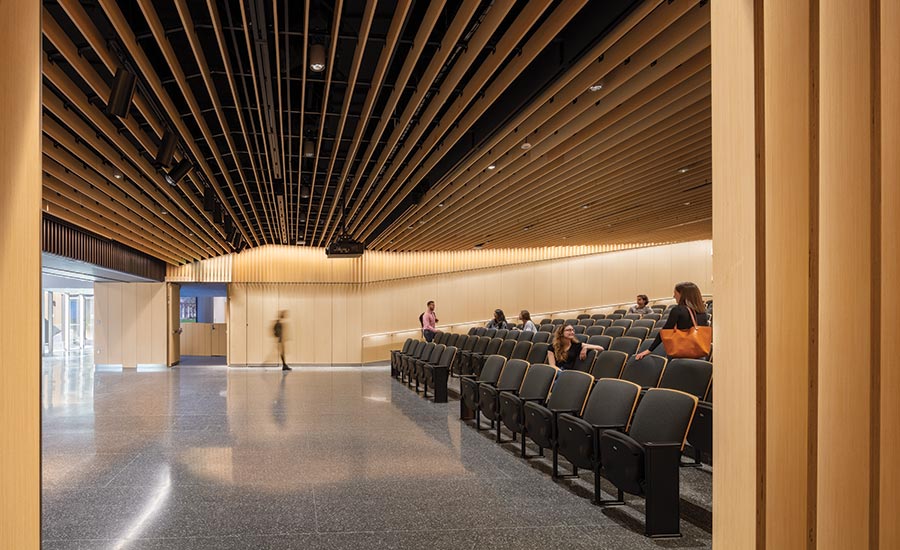 The hope for the new campus precinct is that it will not be an insular academic environment, but will meld with its urban environs. This ambition is apparent in the treatment of the former warehouses, which front Main Street and, on their upper levels, now hold the offices for the admissions staff, the sustainability groups, and the MIT Innovation HQ. Previously, the structures’ first floors had been at loading dock level, several feet above the sidewalk. But, because these spaces will be leased to shops and eateries, the team lowered the slab heights. One of the warehouses, a three-story brick edifice, has been gutted, its original heavy-timber and iron structure removed and replaced with a concrete one that helps support the tower above. Meanwhile, for the adjacent seven-story concrete-framed building, the architects took a more surgical approach. Its structure has been left mostly intact, except that the first-floor slab has been demolished and replaced at a lower elevation. Elsewhere within the old printing plant, the designers worked with the building’s existing assets, revealing distinctive mushroom-shaped column capitals, formerly hidden by drywall, and uncovering a roofed-over top-floor skylight. 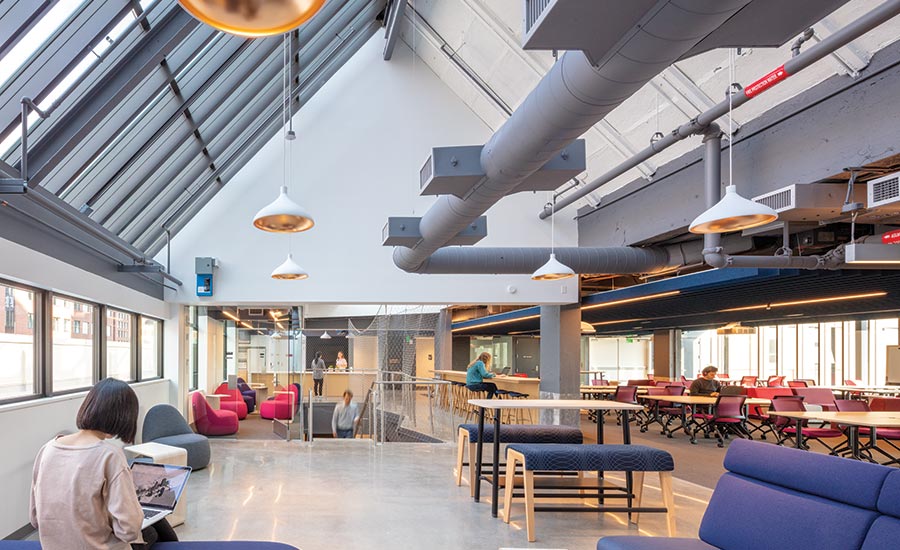 This reuse of Kendall Square’s historic fabric is just one of the many noteworthy aspects of Site 4. In accommodating diverse programmatic needs, engaging the urban surroundings, and incorporating an ingeniously clad tower, the multifaceted project creates a fitting cornerstone for an emerging part of MIT’s campus. 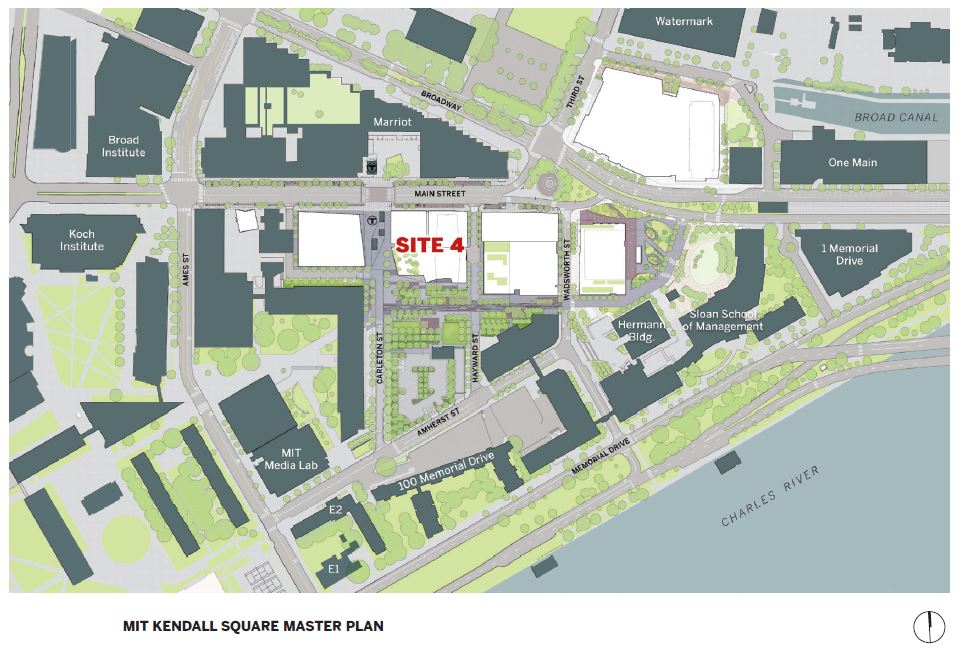 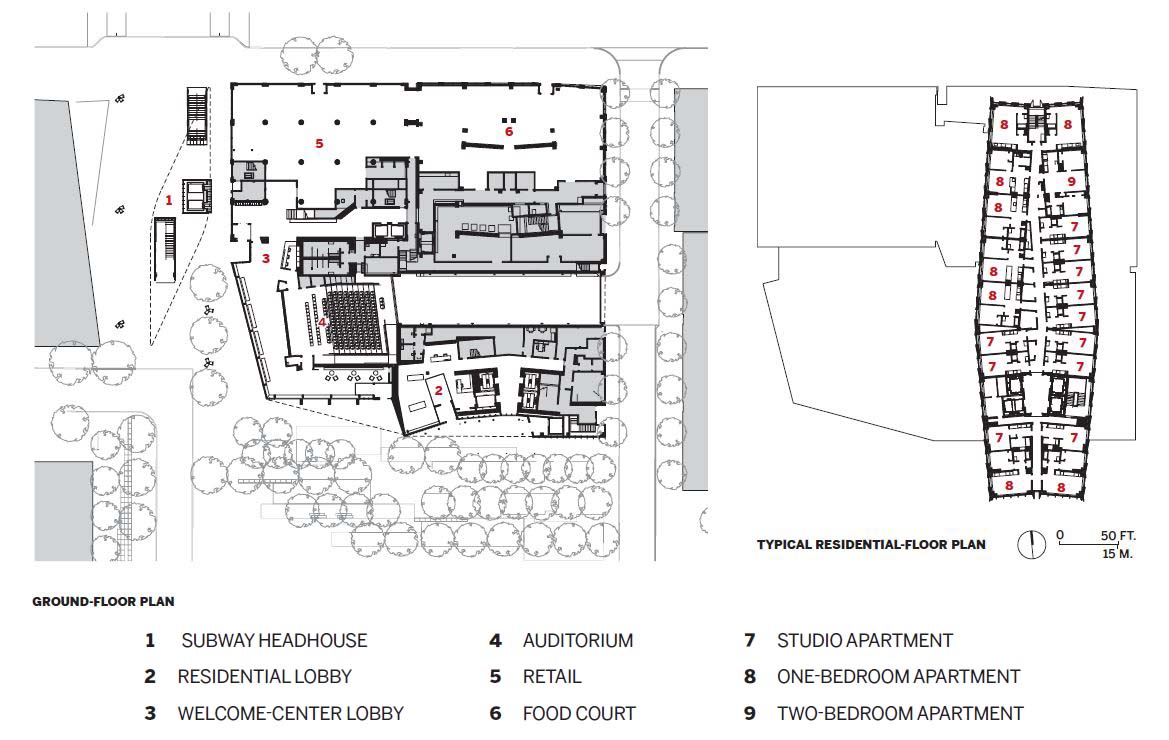