At first glance, the wooden assemblage, about 2 feet long, could be a work of art—an early experiment by Noguchi, perhaps. But something else is going on; the piece is actually a sequence. The first stage is a simple wooden hemisphere; the second shows that same hemisphere cut into unequal segments but emanating from the same center point; the third lays them out in a suddenly familiar array. This is a concept model of the Sydney Opera House. When we see the sequence, we are looking over the shoulder of Jørn Utzon as he tries to convince a skeptical Ove Arup that the central idea of his masterwork is viable. It can work. Look. Often, architectural models are ends in themselves. Early-career architects may lavish time and care on a beautiful proposal in the knowledge that their vision is unlikely to be built. It’s the same with the old crowd too. One of the many compelling moments in the Sydney Pollack–directed documentary Sketches of Frank Gehry is when the interlocutor asks the architect why his practice creates at least two models of different scales for each building. His answer: “So we don’t become enamored of the model.”

Making models for their own delight can be dangerous. The new exhibition Shaping Space—Architectural Models Revealed, at London’s Building Centre, on view until January 2022, explores the more practical, yet no less compelling, aspect of model-making.

While the show emerged from a research network first mooted by the Victoria and Albert Museum (the researcher/curators are Simona Valeriani, Vanessa Norwood, Harriet Jennings, and Mathilde Savary), it features no models from their archive. But the values of the British museum are ever-present, as the V&A was founded to provide historical examples of fine craftsmanship to British industry. The museum’s partner here, the Building Centre, was founded (in 1931) with the equally utilitarian intention of bringing architects the latest in material innovations, and it endures as an industry-backed library of materials. 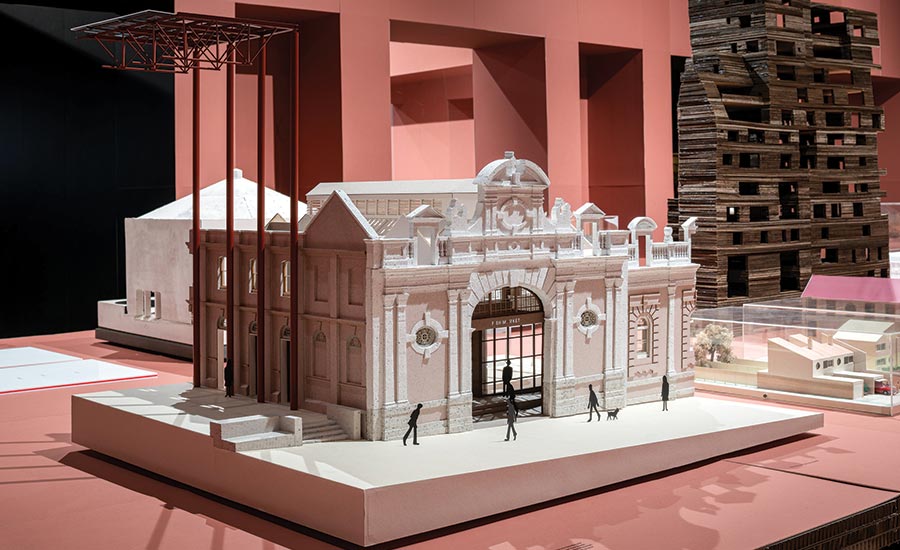 A project for redeveloping London’s Smithfield Market into the new Museum of London. Photo © Francesco Russo, click to enlarge

The exhibition’s arrangement is imbued with these dual-institutional values while still delighting the visitor. Ros Barr Architects’ pink exhibition design places the visitor within a model. Historical examples, drawn largely from a private foundation, Drawing Matter, fringe a central table of contemporary work, laid out like a feast. One loan is a representation of the Metropolitan Life Insurance Company tower in New York—a pencil drawing overlaid on a wooden support. Effectively, it’s a model on a stick, made for Harvey Wiley Corbet in 1929 so the architect could take it from the office into the street and hold it up to see how his design would affect the skyline of the city.

That central table shows that the different intentions behind contemporary architecture models are as prodigious as the number of models made. The examples are presented with a refreshing lack of hierarchy and in easy juxtaposition: they seem to speak to each other, and to us. The work is predominantly from British-based practices—the biggies like Foster & Partners and Zaha Hadid Architects, but also lesser-known but highly respected ones like Peter Barber and Assemble.

Yet this geographical limitation doesn’t inhibit the range. Every purpose of making models is explored, from self-promotion to structural integrity, and every medium, from soap to marble. A wide range of scales is investigated too. Particularly beautiful is the model of Studio East Dining, by Carmody Groarke, to explain the project to contractors—made even more poignant because the structure is gone: one of London’s finest pop-ups, it was a temporary restaurant whose form was determined by the views it provided of the construction of London’s Olympic Park in the summer of 2010.

Gazing at this piece, one realizes that beauty is in fact part of these models’ persuasive purpose. While more could have been said about the relationship between digital and physical models, this exhibition, in a relatively small space, is an urgent celebration of an often overlooked component of an architect’s creative practice.