Charlie Munger, the 97-year-old billionaire who has been ridiculed for wanting to build a dormitory with thousands of windowless bedrooms at the University of California, Santa Barbara, came out swinging on Monday morning. In a wide-ranging conversation with Record, he called his opponents — including a respected architect who resigned from an advisory committee last week — “idiots” and said he expects the 4,500-room building to be copied all over the country. “Every other college will be jealous,” he asserted. Munger said he hadn’t decided how much of the building’s $1.2 billion cost he will cover, but he said that it will be the biggest gift he has ever made.

UCSB is experiencing a severe housing shortage and is being pressured by area residents to build new dormitories. So Munger’s plan for an 11-story, 1.68 million square foot housing block was greeted with open arms by the university’s chancellor, Henry Yang, who called it “inspired and revolutionary.” The building will have nine identical residential floors, each divided into eight “houses,” with each house further divided into eight eight-person suites. Rows and rows of identical 10 foot by 7 foot bedrooms give the building, in plan, about as much variety as a sheet of graph paper. And only about 6 percent of the rooms — the end rooms in each row of 32 — have windows.

Speaking from his home in Los Angeles’s Hancock Park, which he designed himself and which he said has “lots of windows,” Munger said he based the dorm’s design on the Unité d'Habitation in Marseille by Le Corbusier. But, Munger said, that building “was too narrow to make the spaces interesting. So the whole thing didn’t work worth shit. I’ve fixed that,” he said, “We took Corbusier’s errors and the errors in university housing and eliminated them one by one.”

Munger doesn’t suffer fools gladly. In his most recent letter to shareholders of Berkshire Hathaway, the company he runs with Warren Buffet, Munger wrote that “the worst attributes of bureaucracy should much more often be treated like the cancers they so much resemble.” In other words, my way or the highway.

But when Dennis McFadden, a veteran southern California architect, resigned last week from a design review committee at UCSB, after Munger’s building was presented as a fait accompli, his letter made news around the world. McFadden told Record that the letter was meant to remain private. While forceful, it stuck to mild, academic language. “An ample body of documented evidence shows that interior environments with access to natural light, air, and views to nature improve both the physical and mental wellbeing of occupants,” he wrote.

But Munger didn’t return the favor. He said McFadden “reacted with his gut like an idiot. He didn’t look at the building intelligently.” In particular, he said, McFadden didn’t examine the models, which, he said, the chancellor would have happily shown him. “Everybody who sees the models goes ape-shit for them,” Munger said. In response, McFadden wrote in an email that “The floor plans of all levels and images of the digital models and renderings were sent to me in advance of the last meeting, as well as presented in the meeting by a representative of the design team. I understand the plans well and in detail.”

McFadden said that after the dormitory proposal and his resignation made the news last week, he received letters of support from prominent architects around the world. Among others, he said, “Moshe Safdie emailed me with comments about the horrors of the project and asked what he could do to help.” 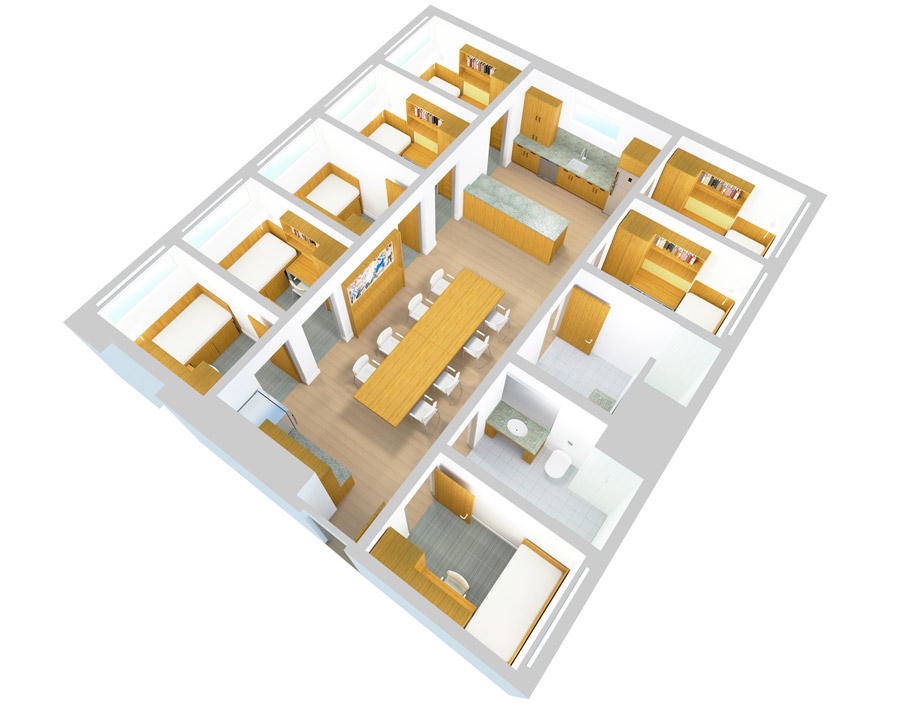 During the long phone interview, Munger said that with a large brood of children and grandchildren, he is “intimately familiar with university housing.” He spent years and years, he said, trying to improve on what he’s seen.

Describing the process of designing the UCSB building, he said, “We took the penthouse space, which everybody wants, which is twice as valuable as ordinary space, and gave it to the students. That, of course, works like gangbusters.” One of the penthouse amenities, he said, would be a Costco store. (Munger has been a Costco director since 1997.) There would also be a club for resident advisors (which will help attract the best people to be R.A.s, he said) and classrooms that will be converted into recreational spaces at night. “No one has ever done that,” he said, adding, “It’s all about the happiness of the students. We want to keep the suicide rate low.”

But after designing the two amenity floors, he says, “We had to figure out how to house the students. It took a year and a half for me to decide not to make more than one student sleep in the same room.” Munger described the times in his life when he’s had to share rooms with unrelated strangers as “awful.” He even remembered sharing a sleeping bag with another Boy Scout, “which we had to do to stay alive until morning,” but which he hated.

Once he decided that every student would have a single room, he realized, “We had a window shortage. So we just copied what Disney Cruises did. The way Disney does it, the window is really a television set. Those work beautifully on the ships. But I wanted to have a spectrum of sunlight, so with a curtain hanging over it you couldn’t tell if it was artificial or real. I figured out how to do that. Programming the lights to copy the sun was too expensive. So we will give the students knobs, and they can have whatever light they want. Real windows don’t do that.” 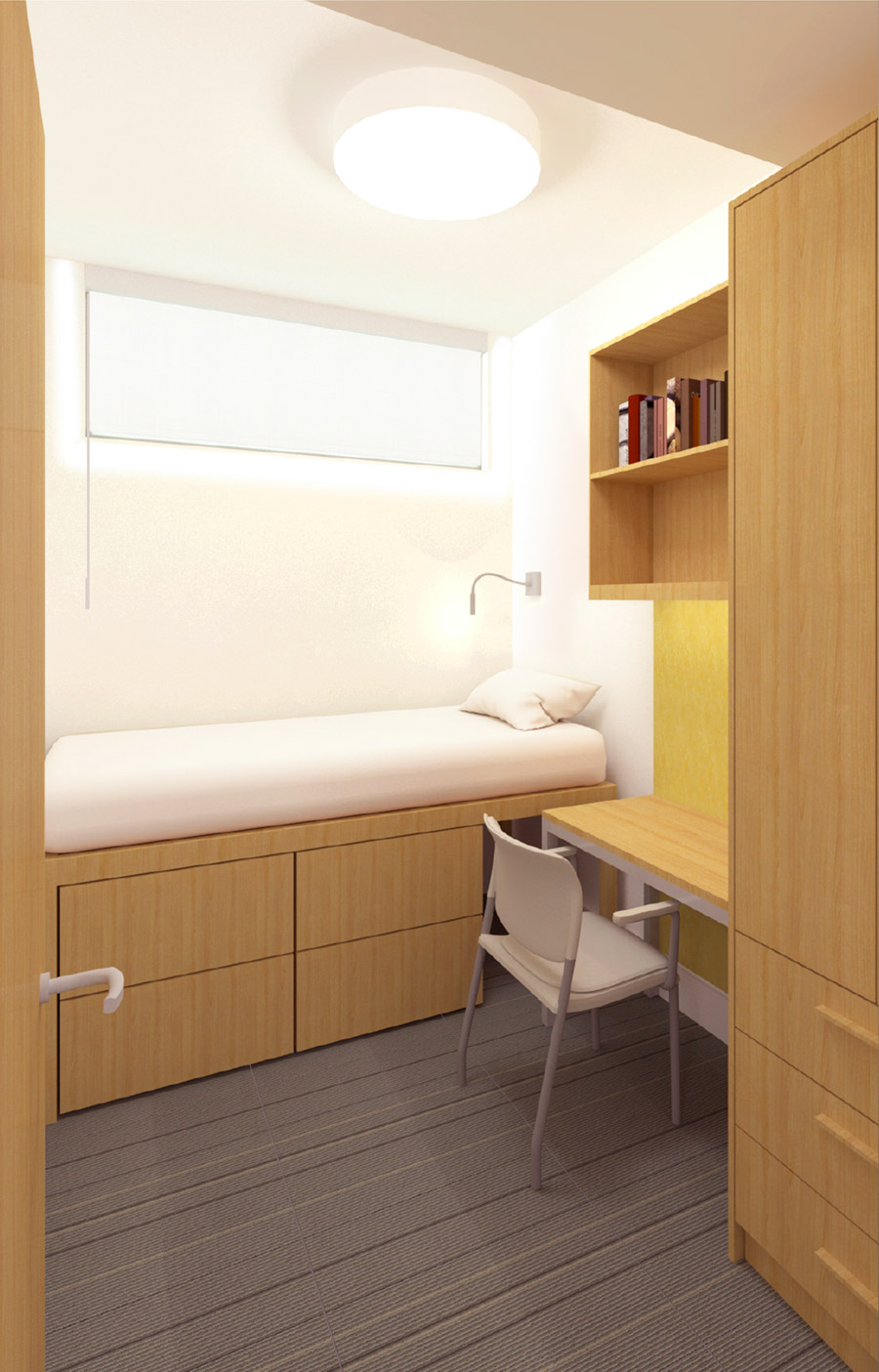 He said he doesn’t see the problem with windowless rooms. “It’s quite endurable, especially with good ventilation. Nobody minds going into a basement restroom and peeing because there’s no window.”

Munger rejected the claim, made by some critics of the building, that it lacks adequate means of egress. “I’m a nut about safety,” he said. “There are enough exits to satisfy all of the codes, and they’re way bigger than normal.” He added, “It’s a sprinklered concrete building. Do you know how much loss there has been to fire in the history of sprinklered concrete buildings? Approximately zero.” Then he spoke of how the concrete for the building will be made — in a factory under high pressure, “so the building will last as long as the pyramids. You can’t get that by pouring on site.” In addition, he said, the extreme standardization would allow much of the building to be prefabricated, saving time and money.

He said that each of the building’s houses will be coeducational, which is “going to enormously improve the behavior of the males.” He added: “Nobody’s ever done all these things in one place. I expect these buildings to sprout up all over America.” His goal, he said, was to make life better for students, not to draw attention to himself. He said he doesn’t even care what the buildings are called. “‘Munger Hall’ won’t help me when I’m dead.”

Speaking rapidly and answering every question he was asked, Munger said his  interest in design dates back to his childhood, when his uncle, Frederick Stott, was a well-known architect in California. “I was around him a lot and I really admired him.” Although he chose a career in finance, Munger said he’s had decades of experience with architecture and construction. “I made my first million dollars creating apartment houses, in Alhambra and Pasadena. You can visit those projects today and they are adored by the people who live there.”

Munger described architecture as “a kind of hobby,” particularly now that he’s spending less time in the office. “I’m almost 98 years old. They don’t need me at Berkshire Hathaway every hour of the day.” 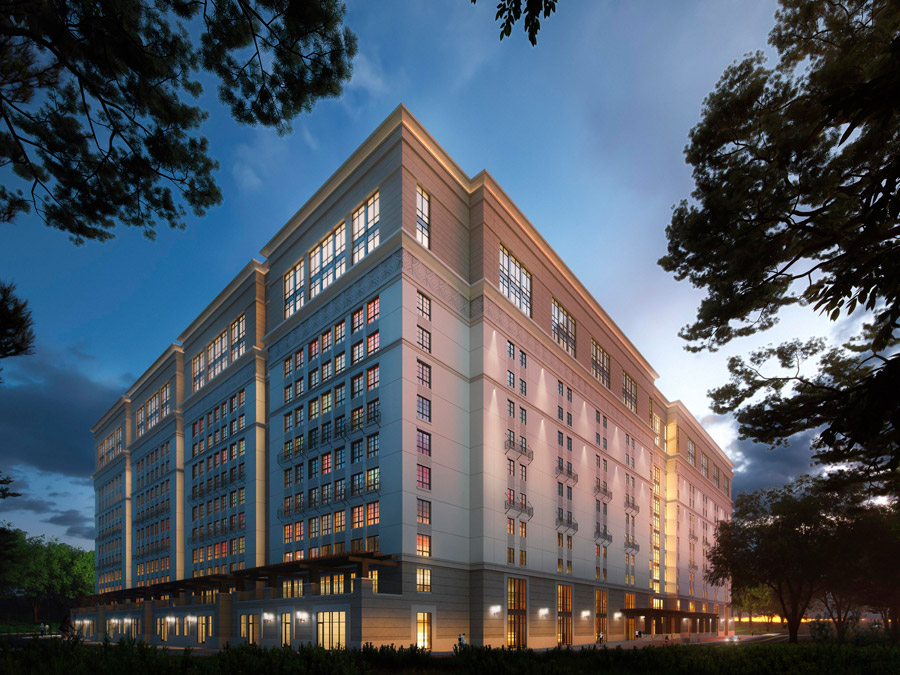 Surprisingly, he said he doesn’t believe universities should allow donors to choose architects. “If you allow the donor to pick the architect, which has been done in many places, the buildings look like shit. But this is a special case. I’ve been doing it for a long time and I know more about it. And I have a very good architect helping me, Navy F. Banvard [a principal at VTBS Architects], who’s one of California’s biggest apartment house architects.” VTBS is the architect of record for the project.

Munger said that the building still has to be approved by the California Coastal Commission, and “there are no guarantees.” But UCSB spokesperson Andrea Estrada told The New York Times that “we are delighted to be moving forward with this transformational project.” According to McFadden, local building codes are not necessarily a stumbling block. UCSB “is essentially its own building department,” he wrote in The Los Angeles Times. “The campus can, with approval from the UC Board of Regents, make its own determination.”

Munger, asked what he has learned from the UCSB design process, said, “What I learned was how stupid I was. Imagine taking years to decide that the kids should get their own bedroom.” And asked about the controversy that has ensued since McFadden’s letter was made public, he said, “I’m surprised by how little controversy there is. Architects never agree on anything.”