In 38 years as an educator, Carol Campbell has enjoyed many at Portland, Oregon’s Grant High School: nine years as a teacher, a parent of two graduates, and—after stints as principal at two other regional high schools—she was back to lead it in 2013. When voters passed a school bond directing $138 million to Grant, Campbell turned down the job of district superintendent to lead the school’s modernization. “Grant was built in 1923 for the way education has been delivered over the last 100 years,” she says. “We had a chance to break up that model to deliver instruction more creatively.”

Hired to substantially upgrade the school in 2015, the local office of Mahlum Architects quickly learned that when Campbell uses the pronoun “we,” she means it. In decades of designing over 200 schools, the architects at Mahlum had never engaged in such a collaborative design process, says project designer Rene Berndt: more than 100 user-group meetings, four public workshops, and a dozen meetings with a more than 20-person design-advisory group (DAG). Faculty, parents, preservationists, and neighborhood activists weighed in. So, of course, did students, with Campbell inviting full-throated participation from kids of color and those who identify as transgender.

Grant is as close as any school might come to being famous. In 1954, a national magazine declared Grant “the best high school in America.” The choir room starred in the 1995 movie Mr. Holland’s Opus, and the existing skylit space that was formerly a gym—a separate structure with classic open trusses and squeaky maple floors—has appeared in Nike commercials. 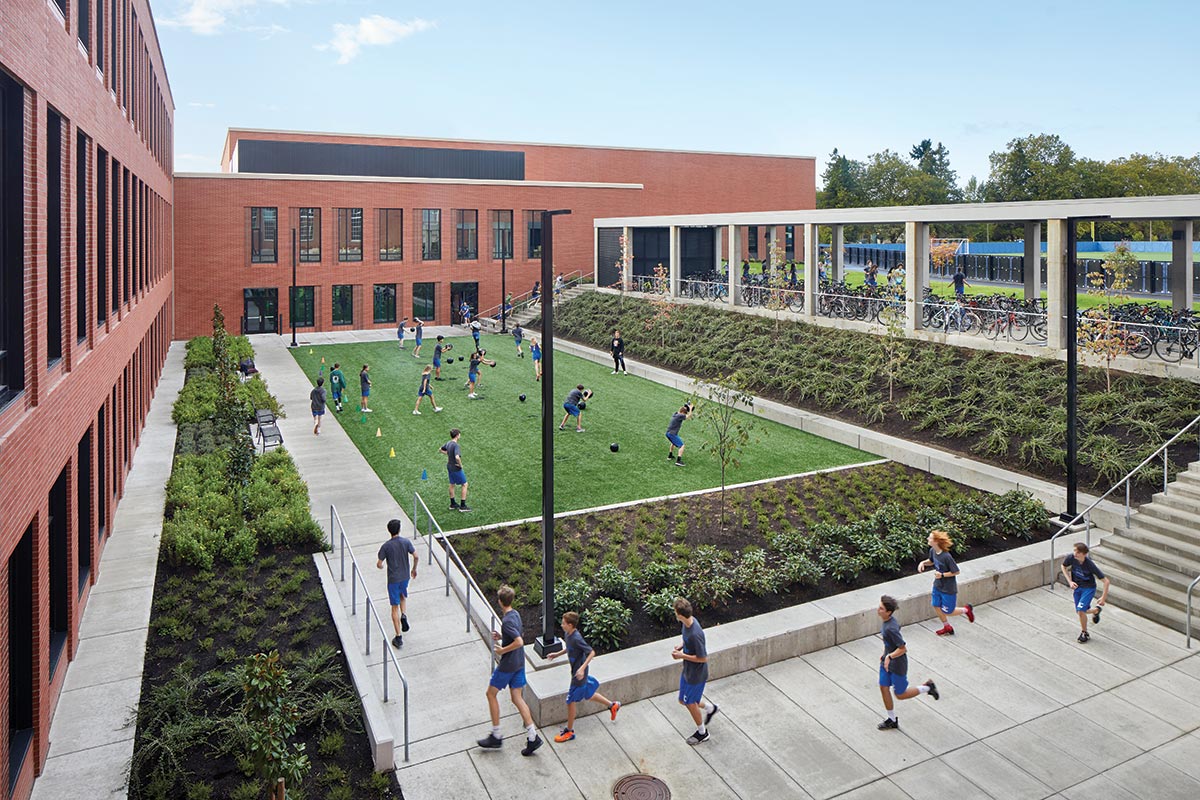 The historically significant Grant High School (top) was restored and enhanced by new courtyards (1) and solar arrays, one above a bike shelter (2). Photos © Benjamin Benschneider, click to enlarge. 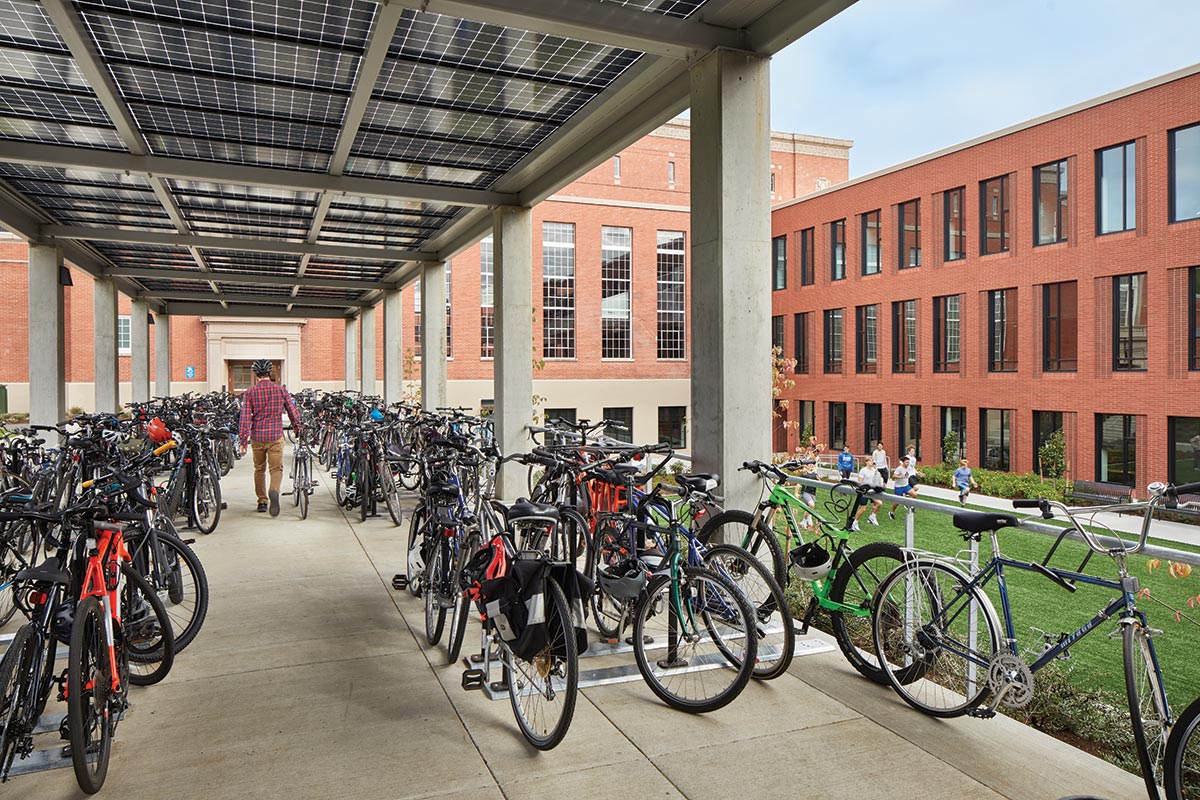 But for the students, any grandeur the 1920s Classical Revival buildings once held had become encrusted in a palimpsest of 1950s and ’60s additions and adaptations. Thirty percent of the school’s usable space was in the basement, a dark purgatory with a cafeteria largely for students enrolled in the free-lunch program, many of whom were youth of color. Everyone else ate in the upper corridors, in the park, or at McDonald’s.

In addition to seismic, energy, and daylighting upgrades mandated by the school district, Campbell and the stakeholders asked Mahlum for a building that would drive a shift in the school’s teaching and learning methods, safety protocols, and equity among staff and students. “We were trying to figure out a new model of education,” Campbell says, “but we didn’t know what it would look like.” Both students and faculty wanted collaborative areas with tables and flex space. While Grant had notable art and theater programs, it did not offer “career and technical education” (CTE), with makerspaces to learn culinary arts, engineering, fashion, and other applied skills. Having been a principal at two schools with strong CTE programs, Campbell had witnessed higher graduation rates. “Given the cost of college,” she adds, “it was our obligation to provide opportunities to explore different areas in high school.” 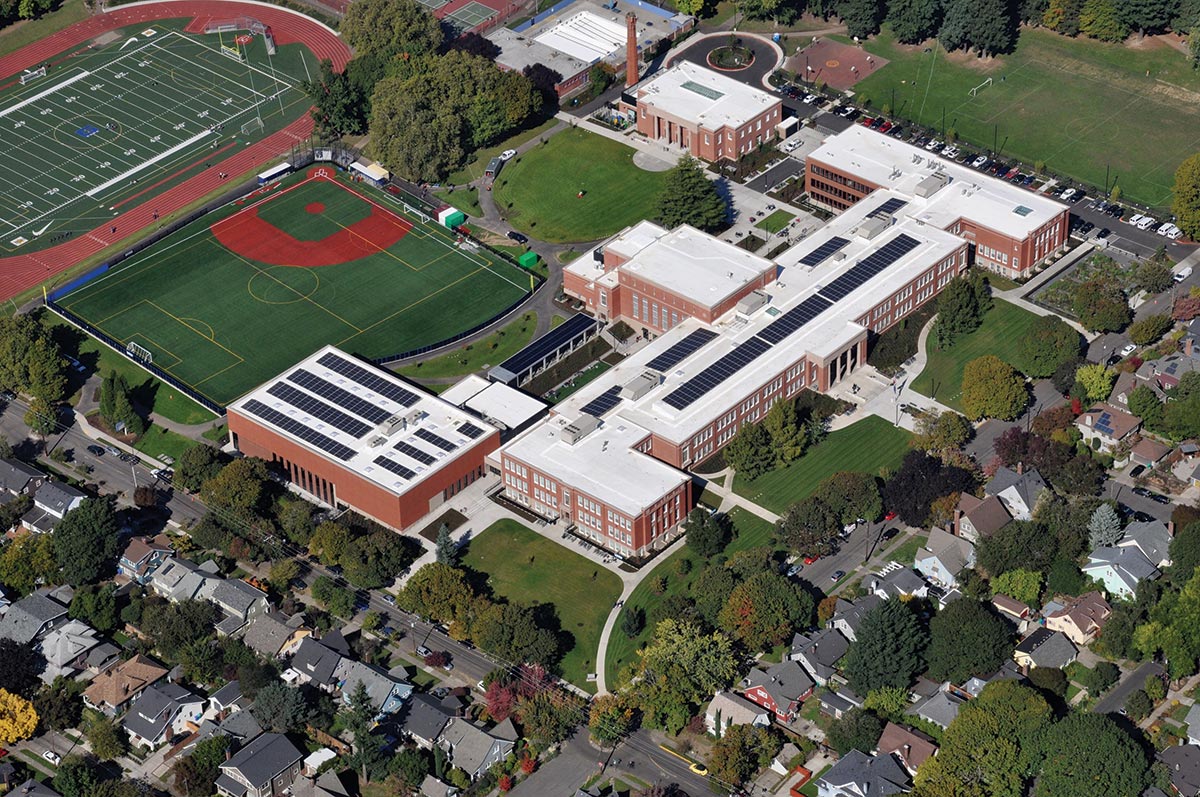 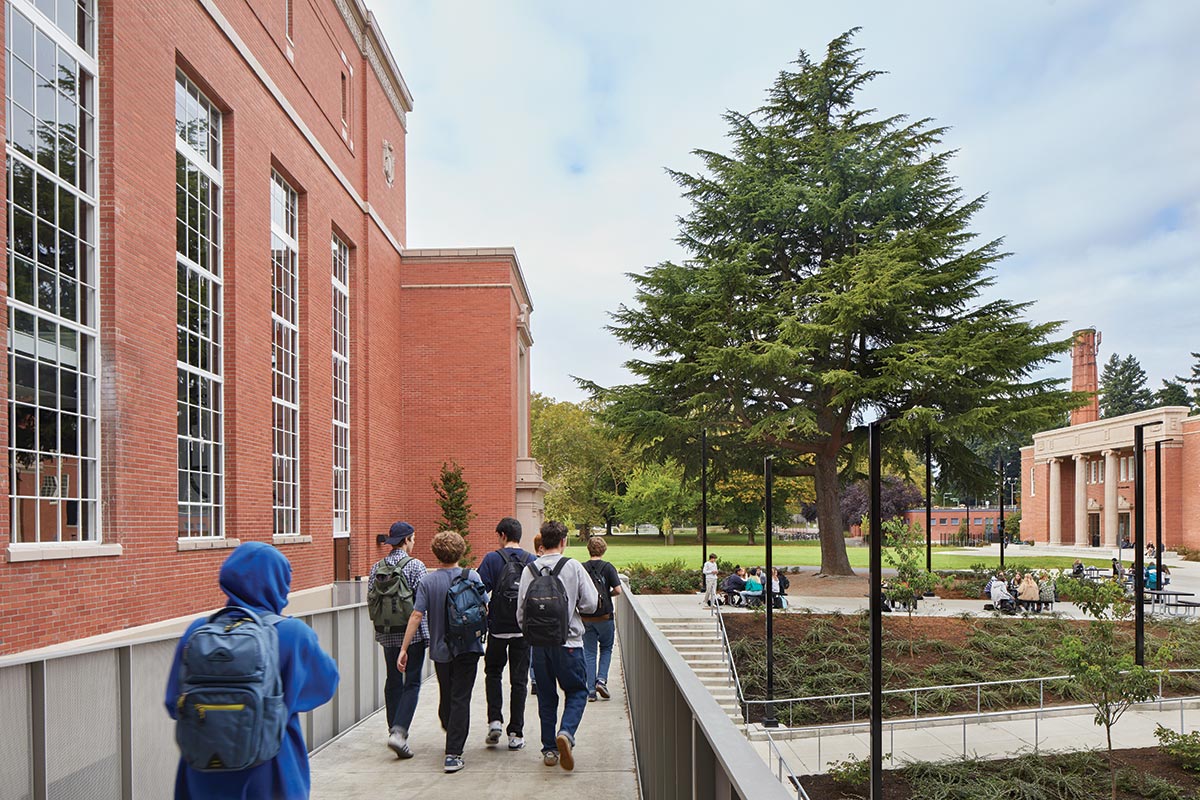 Mahlum’s strategy reduced the number of traditional classrooms and the school’s overall footprint. “We respected the building’s history by removing the additions and creating new ones that take the school back to its roots,” says Mahlum’s project manager, Alyssa Leeviraphan. Gone is a Monopoly-board cluster of midcentury outbuildings. At the same time, the architects expanded the old school with a 30-foot-wide, three-story bay on its west side, adding a gym wing that enhances the Beaux-Arts symmetry. 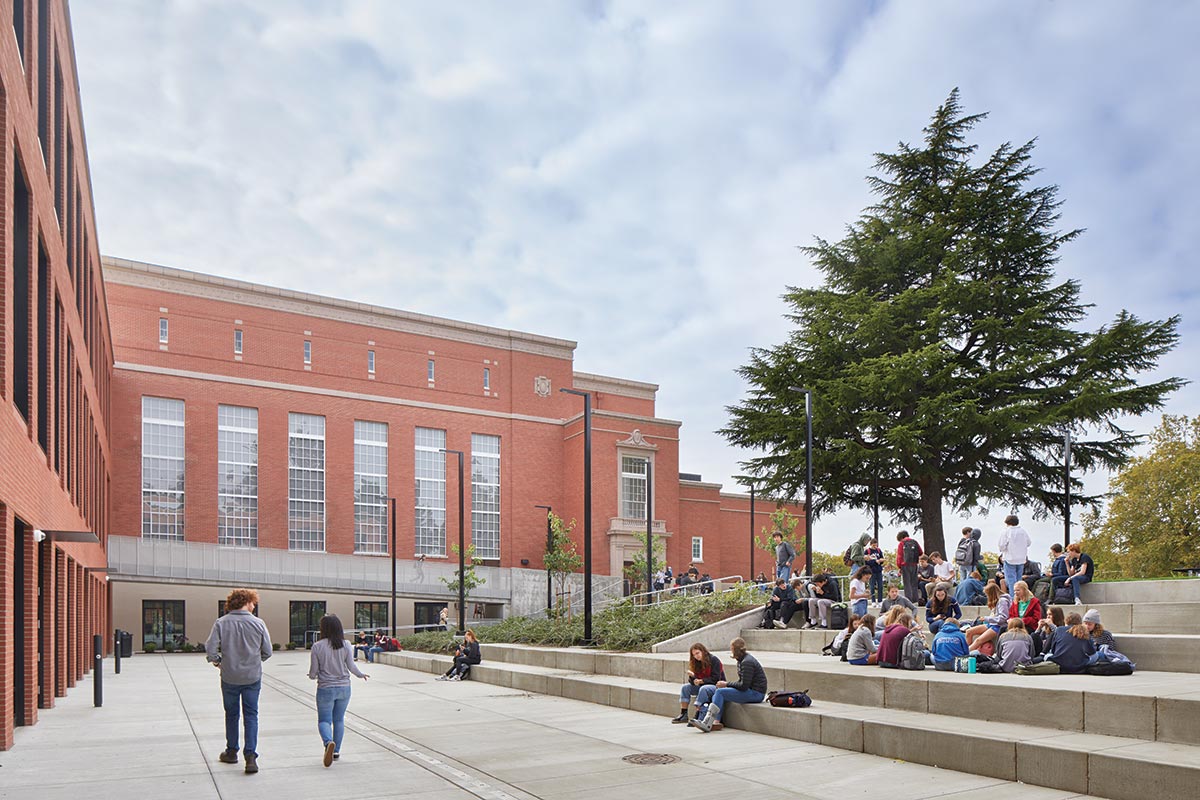 Inside, dreary double-loaded halls lined with lockers have been transformed, with large classrooms on the building’s historic side that open to a “collaboration corridor”: a mix of various-size meeting spaces and smaller, open-plan offices. Windows in the bay filter daylight into the basement, where one of two new cafeterias and a fitness lab now spill onto sunken courtyards. Most students eat at school now.

Staircases too have become destinations. The architects opened the central flights on all levels, so each landing faces a school asset: a theater, meeting room for alumni, and one of several glass-walled CTE spaces, where equipment, from sewing machines to 3-D printers, is displayed like items in a gallery. At the building’s ends, stairwells are flanked by “collaborative forums,” with stepped concrete seating for classes, guest speakers, and a biannual student-run event centered around discussions about race and diversity. To shed light on such activities, linear luminaires now zigzag through the halls and facilitate wayfinding while providing a break from the building’s architectural formality. 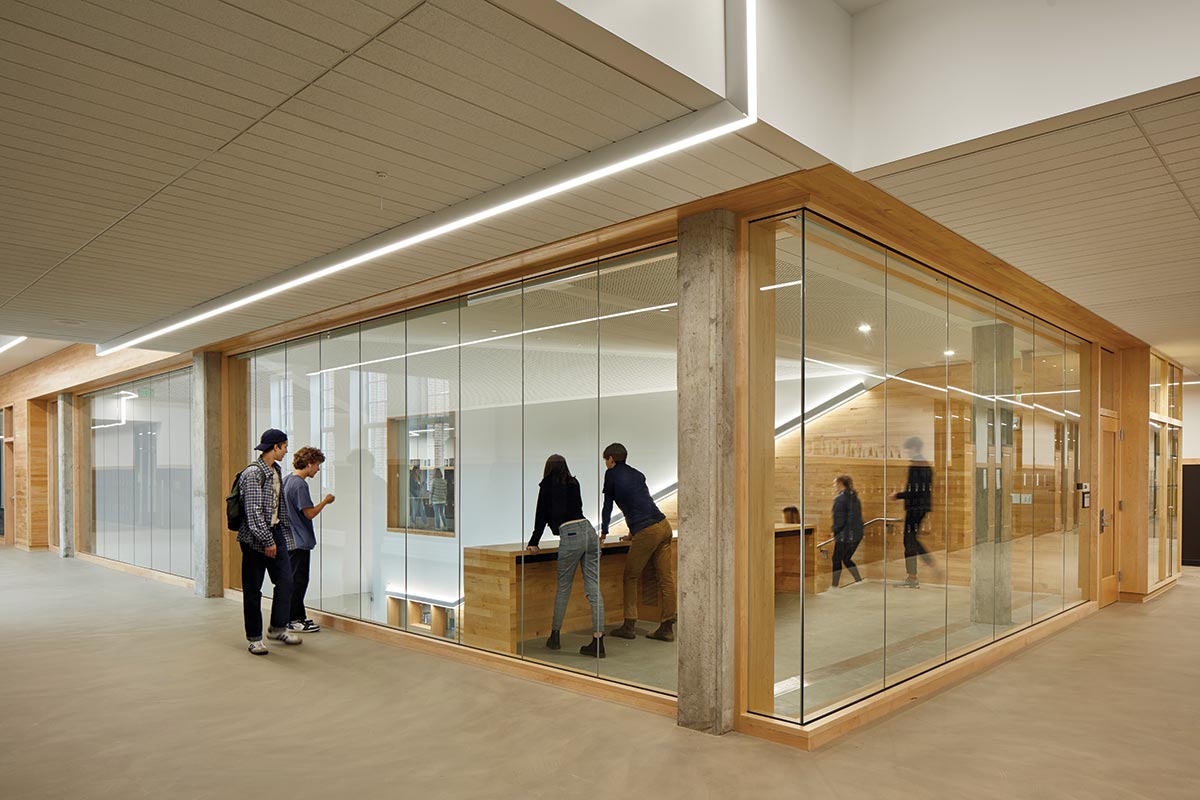 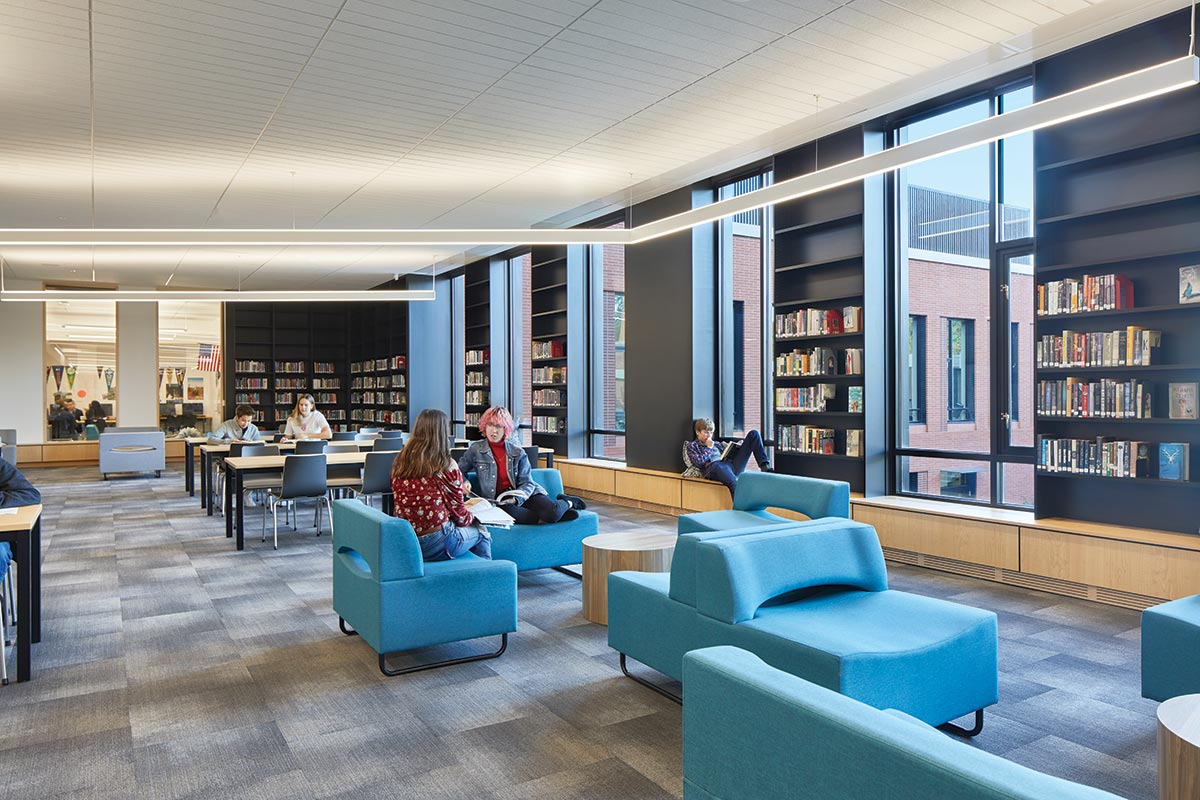 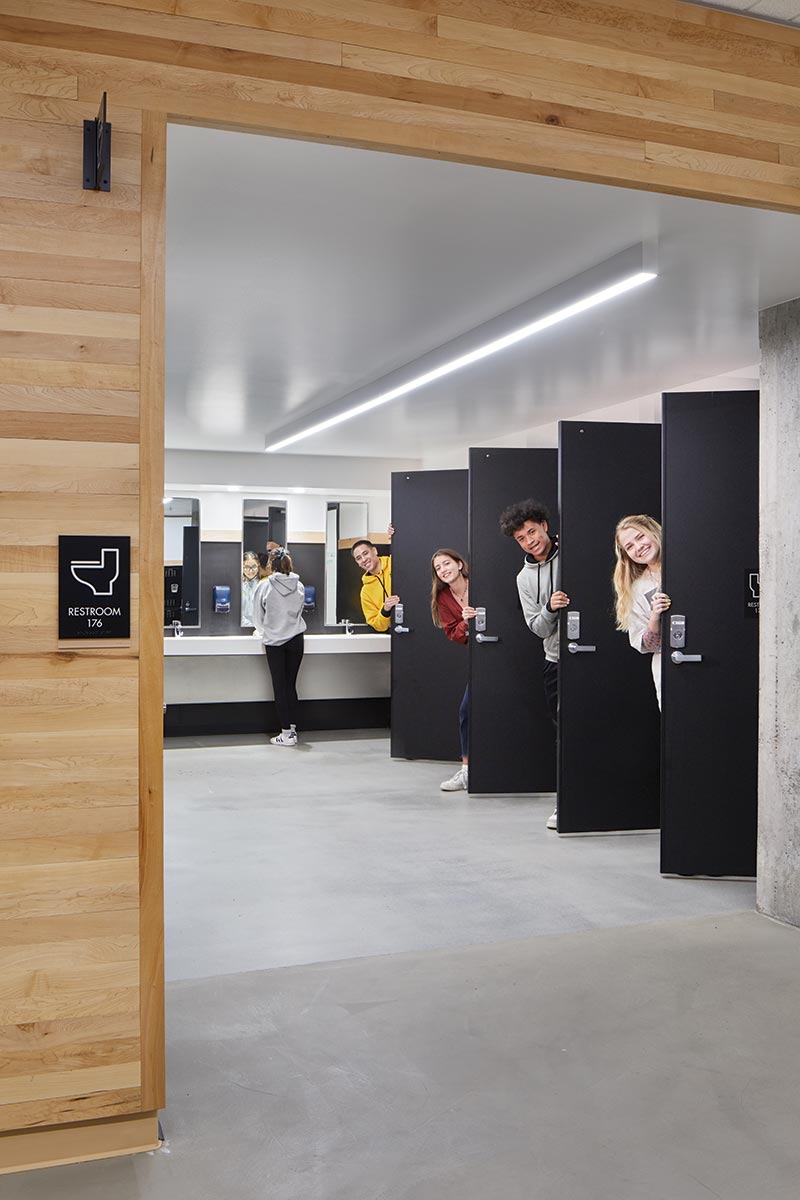 Mr. Holland might not recognize the refurbished theater, which has fewer seats, updated sound and lighting, and ADA-compliant accessibility, while maintaining—with a special variance—its original stained-glass exit signs. The only remaining outbuilding, the original gym, has been turned into an arts facility, with studios around a double-height gallery beneath a restored skylight. The design team reused the old gym floors and bleachers both as flooring in the arts building and as wood paneling elsewhere, school colors and mascots intact. The new bay and gym echo the original building’s brickwork and windows with contemporary flair. 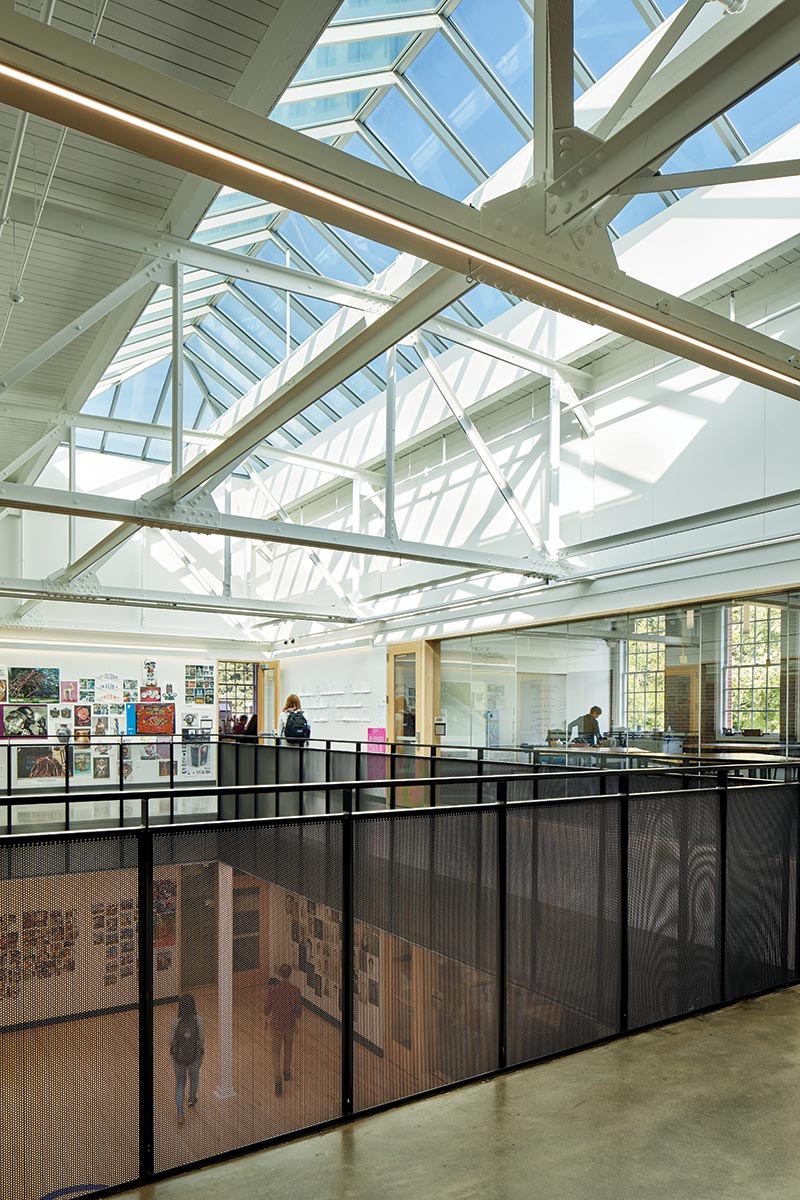 The old gym is now an arts center—daylit by a skylight. Photo © Benjamin Benschneider

The LEED-Gold renovation features a 325-kilowatt solar array—the largest of any school in the state—topping much of the main building and covering an outdoor bike shelter between the gym and the theater. By demolishing a ’50s-era addition, the architects were able to create a grassy 1,200-cubic-yard water-infiltration zone to mitigate storm drainage.

Among the improvements, the DAG sought to provide a greater sense of inclusivity. Long before gender-neutral bathrooms became a national issue, Grant opened stand-alone staff bathrooms for students uncomfortable in group lavatories. But pupils in the Queer Straight Alliance, and others, argued at stakeholder meetings that gendered group bathrooms, besides being discriminatory, further illicit activities, bullying, and harassment—harmful to all. To address these concerns, Mahlum replaced the restrooms with fully enclosed individual stalls that flank shared sinks open to the halls for visibility and security. Some students were wary about sharing. “But the new bathrooms are cleaner, because everyone knows they’re going to be shared—sometimes with teachers,” says Maddie Patterson, a member of the first senior class at the refurbished school. The design is now standard for the school district.

The flexible design is holding up to unanticipated tests: enrollment has surged from the planned 1,800 to 2,000. Senior Zach Olson feels that everyone is getting something that will be a benefit to their high school experience. “It’s a whole lot less like going to a prison.” 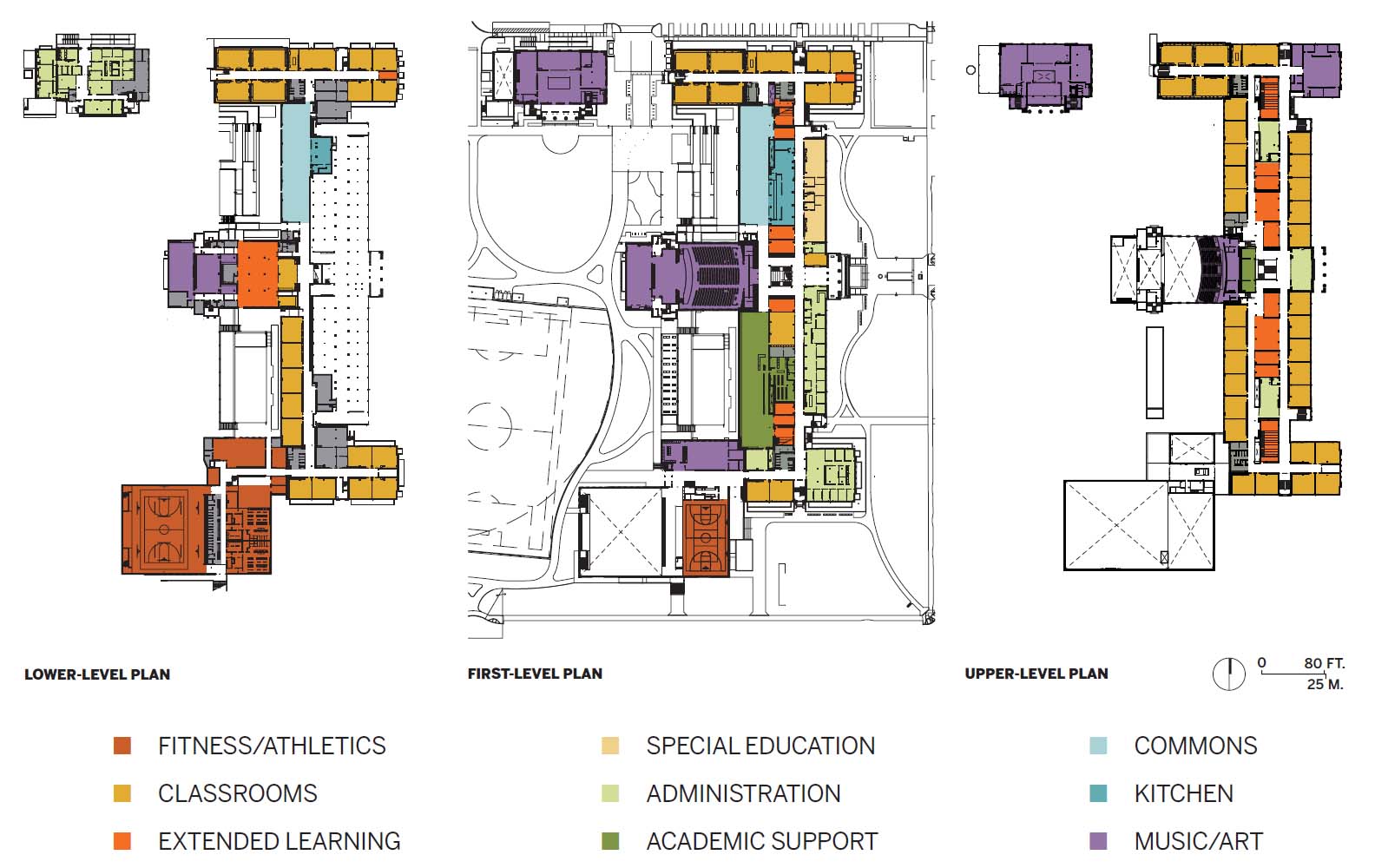