On the western coast of Greenland, 150 miles north of the Arctic Circle, the Sermeq Kujalleq glacier—the most productive in the northern hemisphere—disgorges more than 38 billion tons of ice annually into an ice fjord. The large icebergs that calve off the glacier and float down this ice fjord—improbably called Disko Bay—toward the open sea create one of the great spectacles of the Arctic. The Icefjord Center provides a view of that spectacle. It is a short walk along a pathway from the outskirts of Ilulisat, an old whaling settlement of some 5,000 inhabitants, the third-largest town in Greenland.

The walk is along a track through low grassland that is covered in snow much of the year. The structure overlooks a small inland lake and stands where the track breaks into three paths, all of which lead into a UNESCO World Heritage site that includes the fjord and the glacier. 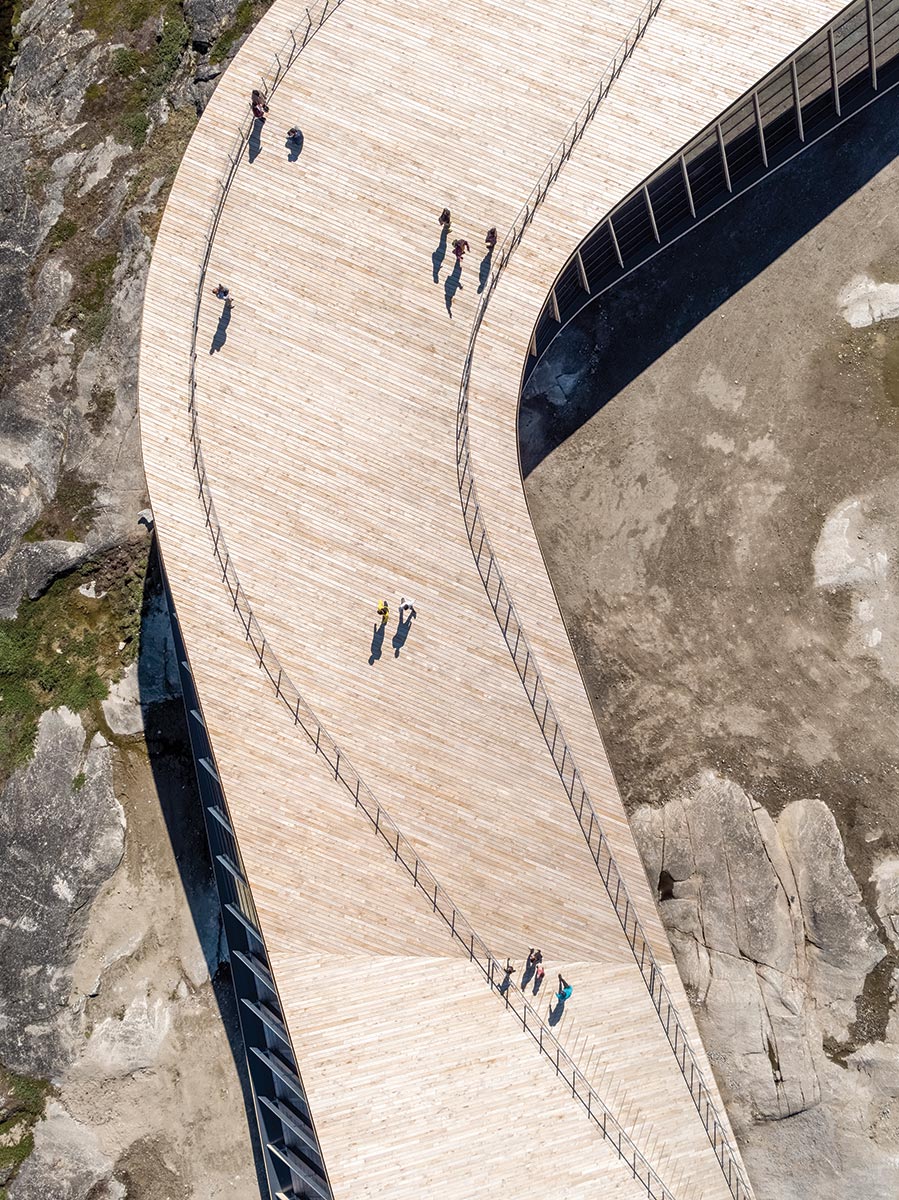 Icebergs—broken off from the largest glacier in the northern hemisphere—are best viewed from the center’s roof deck (above and top). Photo © Adam Mørk, click to enlarge.

Just outside the UNESCO protected zone, the long, low, curving Icefjord Center is also a piece of landscape, providing intrepid visitors with a roof terrace for their first glimpse of the icebergs, which are sometimes more than half a mile high and occasionally set off great waves crashing across the bay. According to Dorte Mandrup, the Copenhagen-based architect of the Center, “You couldn’t see the icefjord from the site we had [a former heliport]. By making a boomerang shape, and placing it on the edge of the site, cantilevering it out toward the lake, we can give visitors the chance to see the icefjord and also learn about its importance.” The 161,000-square-foot building rests on a raised steel frame to enable it to lean out over the slope and to leave as small a footprint as possible. The bedrock in which the structure is anchored is the oldest in the world, and the architects wanted to remove very little.

Any structure in Greenland must be built with imported materials. Using a series of 52 unique steel frames, the center is 400 feet down the middle of the curve. Its section slowly changes as visitors walk through it; it is triangular at the north entrance and becomes rectangular before returning to triangular at the south end. The building is 21½ feet from floor to ceiling on average, although it is slightly taller at either end. 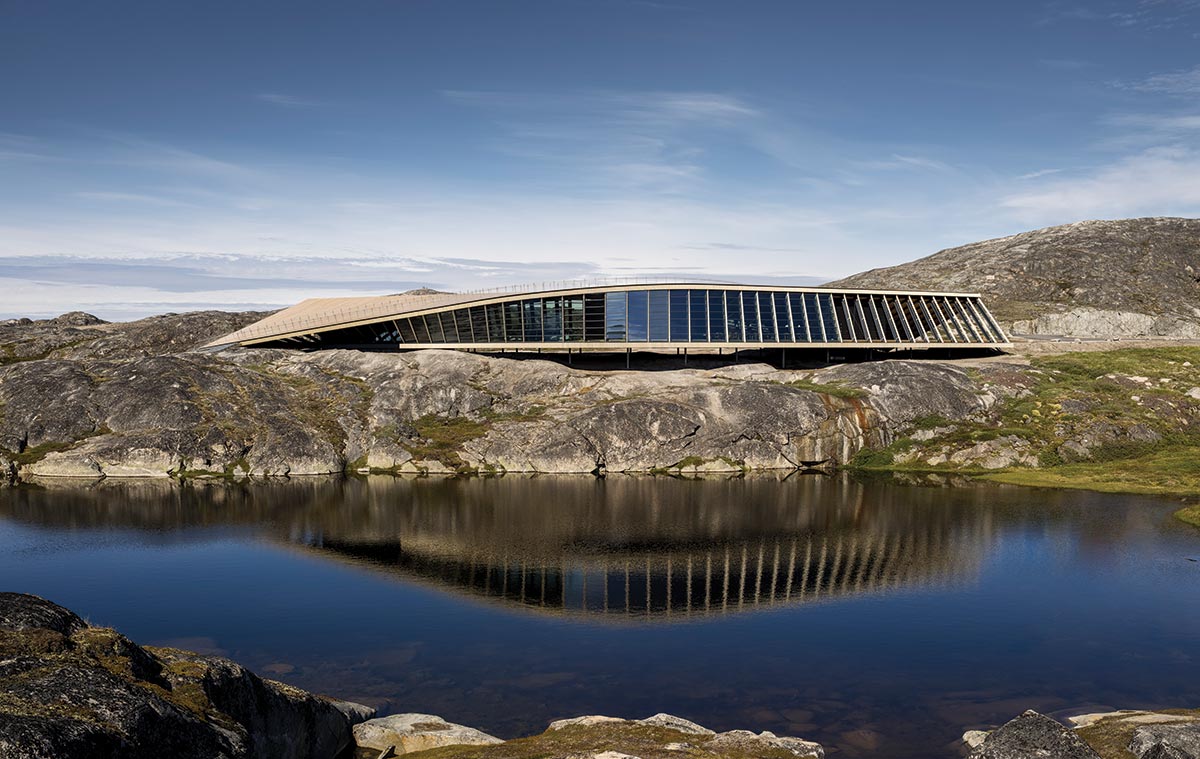 The steel frames, wood, and prefabricated facade system (1,2,3) were imported, like all building materials in Greenland. Photos © Adam Mørk.

The architect has placed these frames in the boomerang plan and arranged them to create a gracefully curving roof. Although most of the wood used in the building is robust akoya, the roof terrace decking is oak, with cellular glass insulation. The facade system is prefabricated, made from aluminum with mounted wood profiles and triple-glazed floor-to-ceiling windows.

When visitors walk into the building, they pass through this series of frames and encounter three wood-framed and clad freestanding structures resting on the deck: first is the ticket office, then a café and cinema—with an exhibition gallery standing in the open plan—and finally an office.

An exhibition about ice is in an open-plan gallery. Photo © Adam Mørk

Wisely, the Icefjord Center does not seek to compete with the drama of the birth of an iceberg. Nor does it just meet the basic necessities of a visitors center. Mandrup has managed to create a building that not only celebrates the journey to see these wonders but helps explain, in a time of global warming, man’s evolving relationship with the ecology of ice. 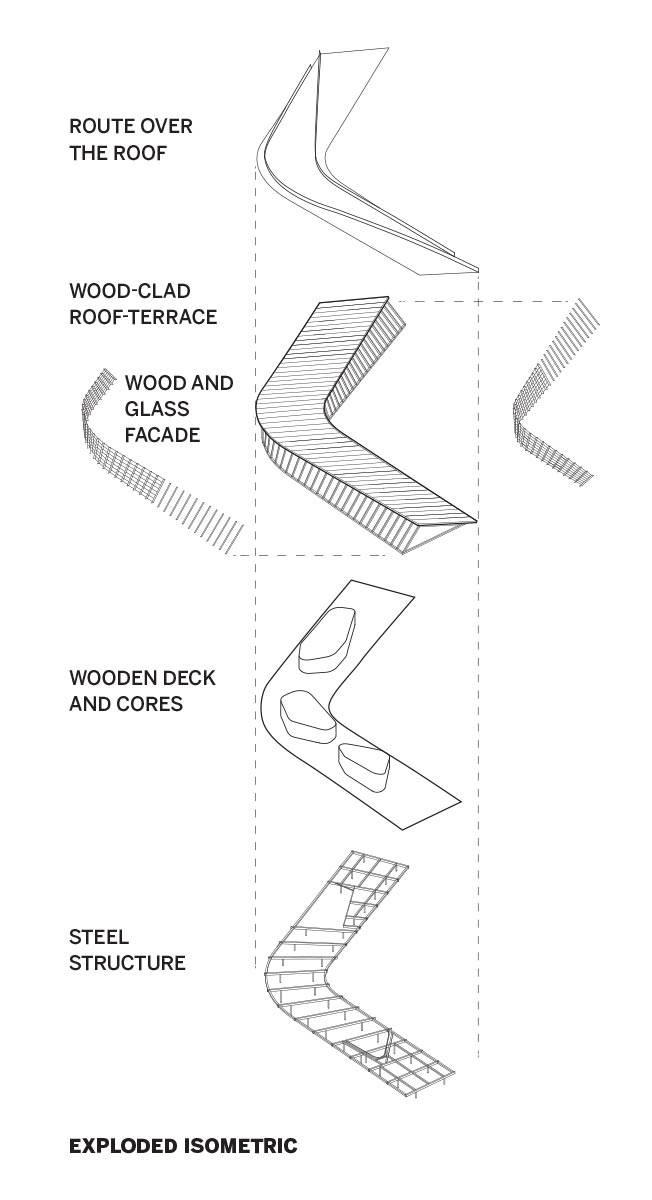