This website requires certain cookies to work and uses other cookies to help you have the best experience. By visiting this website, certain cookies have already been set, which you may delete and block. By closing this message or continuing to use our site, you agree to the use of cookies. Visit our updated privacy and cookie policy to learn more.
Home » How the Translucent Stone Façade Was Created on the Perelman Performing Arts Center
Architecture NewsInterviewsPerforming Arts Center Projects

The Ronald O. Perelman Performing Arts Center, a $500 million addition to the World Trade Center in lower Manhattan, won’t open until 2023. But its recently installed facade, composed of 4,896 panels of heavily veined marble, is already a sensation. The building, which overlooks the 9/11 Memorial, is a descendent of Yale University’s Beinecke Rare Book Library (1963), designed by Gordon Bunshaft with a skin of translucent marble that gives its interior a spectacular glow by day and makes the building a beacon by night. Achieving a similar – but even bolder – effect at the much larger Perelman was a challenge for architect Joshua Ramus of REX, who worked with the facade consultant Front on the project. He talked to Fred Bernstein about what he calls “the long, beautiful story” of the facade.

Why did you want to wrap the building in translucent marble?

Given the site, we wanted the building to be elegant and respectful. It couldn’t distract from the memorial, yet we wanted to give a hint of the creative activity inside.

When you’re inside Beinecke, you can see practically all of the facade at once. Are there places in your building from which much of the facade is visible?

Yes. There’s a perimeter circulation zone separating the facade from the inner performance box. From that zone you can experience huge expanses of the facade, which appears to float.

On the inside, in sunlight, the effect is very dramatic, with brighter colors and more pronounced veins in the stone than the exterior leads you to expect. It’s like being inside a tiger’s skin!

And when you get close to the stone, its depth becomes apparent. I believe people are going to be very surprised by the interior. 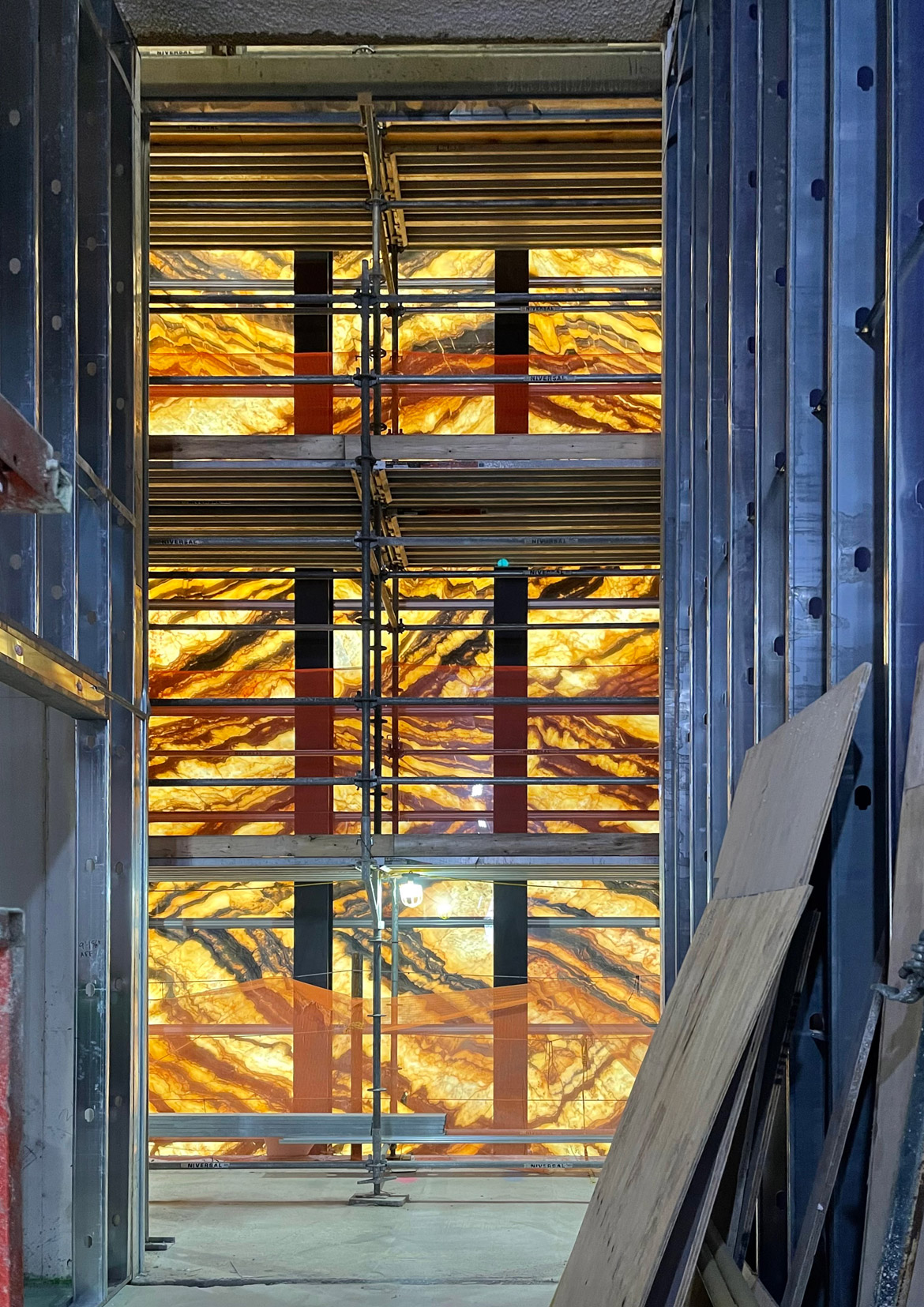 And, conversely, you wanted to make the box glow at night.

Beinecke’s facade looks like it was pretty easy to build. Slabs of marble, about an inch and a quarter thick, were slipped into a metal frame. How is your facade different?

This is a high-performance facade. The stone is half an inch thick. We wanted it to be as thick as possible, so you’d see the depth of the veining. On the other hand, if it was more than half an inch thick, its expansion and contraction could have caused delamination.

There is a layer of glass laminated to each side of the stone, sealing it in. If the stone hydrated and dehydrated it could begin to bow. This way, no moisture will ever reach the marble.

So it’s a glass-stone-glass sandwich.

Yes, but each sandwich, which is 3 feet high and 5 feet wide, is part of a thicker insulated unit. The outermost piece of glass has a microtexture similar to that of honed stone. The measure of its success is that many people don’t realize the outer surface is glass, not stone.

I’ve heard that all four facades are identical. Why?

You’re talking to a purist. We couldn’t predict what would come out of the mountain. And if there was something odd about the pattern on one facade, but not the others, it would have looked like a mistake. Making the four facades identical is a feat we pulled off despite the chorus of naysayers insisting that it was impossible.

Were you able to visit quarries and pick the stone you wanted?

To have a fully warrantied system and competitive pricing, we needed bidders to create their own marriages of quarries, stone fabricators, and glass laminators. We provided clear aesthetic specifications: cream-colored marble that turns amber when backlit, with lively gray veins. So even though we couldn’t choose the exact stone we knew the end result would look something like our renderings! The winning bid used stone from a quarry in Estremoz, Portugal called Granoguli. While it doesn’t have as much variation in the density of veining as in our original renderings, the veining is wonderfully pronounced. The marble is everything we had hoped for.

Have you been to the quarry in Portugal?

Many times. We would go and direct where they should cut next.

Were all the slabs cut before you started arranging them?

No. To stay on schedule we had to compose the façade in bands as the marble came out of the mountain—we couldn’t wait until we had all the material to decide on the final composition. So we created a process that we felt would result in something exceptional even though we were not exactly sure what it would be—what I like to call “productively losing control.”

How did you settle on a pattern?

We did lots of tests, and we came to the conclusion that, because we did not know how consistent the stone would be, making each facade symmetrical both horizontally and vertically gave us the greatest chance of achieving aesthetic success.

That means that radiating out from the center you would need four identical stones in each position. And there are four facades. So it sounds like you needed each block from the quarry to produce sixteen identical or nearly identical pieces.

That’s correct. But as you slice up a block you can’t be sure how long a particular pattern will continue. Plus, even if you get 16 similar slices, one or  more can break. These half-inch slabs are very fragile. So we spent a year and a half finding slabs that were out of sequence or even from multiple blocks but that looked almost identical. 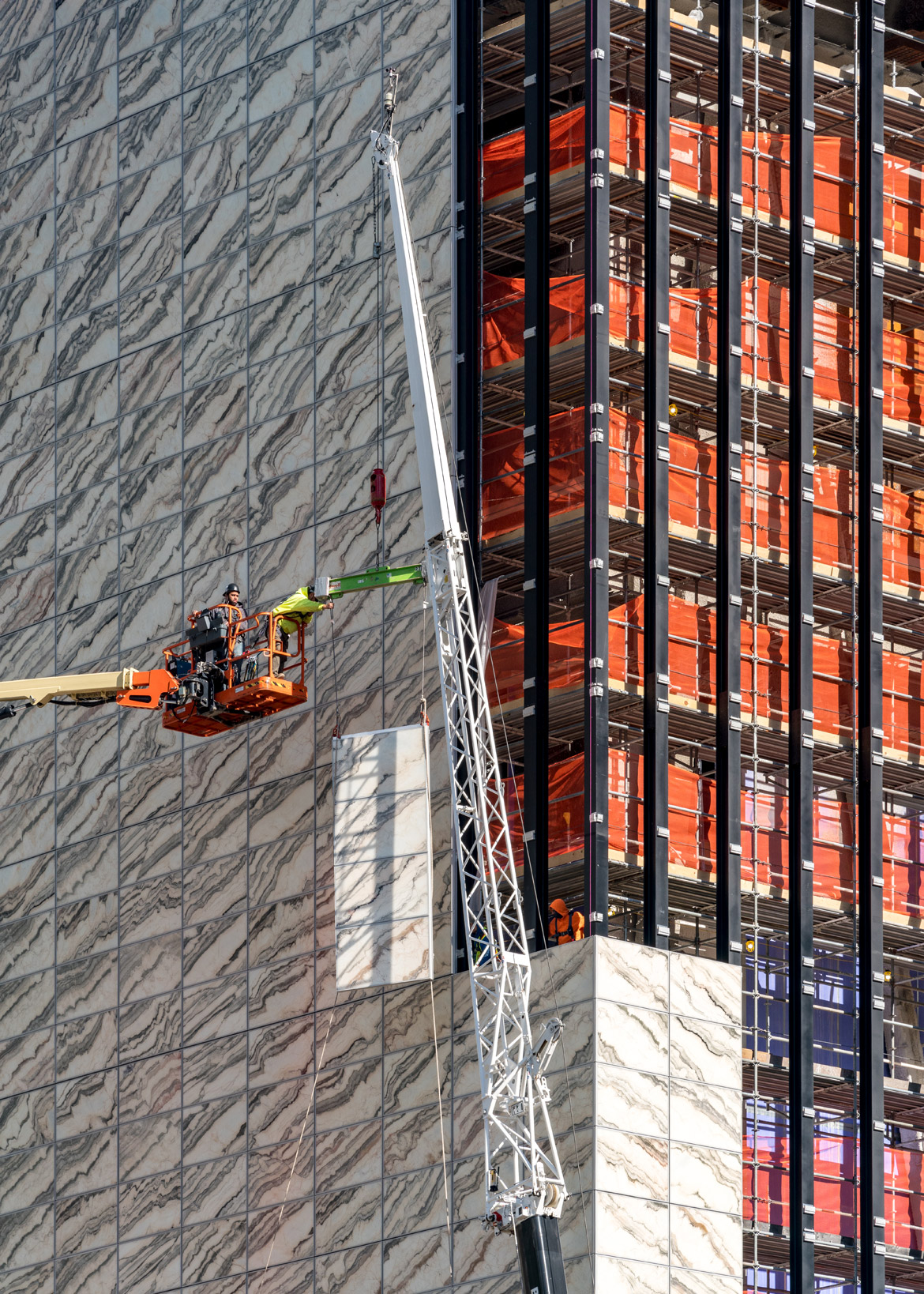 I don’t imagine you did that with the actual slabs?

Each slab was digitally photographed with light on it (day) and through it (night) so we could compose the elevations on the computer. We did literally thousands of iterations.

Was it your choice to make the veining diagonal instead of horizontal, vertical, or a mixture?

Yes. From our earliest competition renderings, we were sure that diagonals would make the most beautiful composition. So we specified the slabs be cut so as to give us those diagonals. Wanting the angle of the veins to be consistent made it more difficult for the stonecutters. They had to quarry blocks large enough to cut within the angle range we required, and then rotate the slabs before cutting them into their final dimensions.

And how would you describe the pattern you ended up with?

At the center, we have what we call the turbulent zone, which is a combination of diamonds and chevrons, and at the sides we have the calm zones where all the veins go in one direction. Keeping the veins parallel at the edges makes the building look taller.

When I look at the building when the sun is shining, there are bright reflections of the surrounding buildings on your facades. Some of those reflections add their own patterns to your pattern, in really interesting ways. Did you know about the reflections in advance, or do they surprise you every day?

The ray-tracing power of contemporary rendering software produces highly accurate shadows and reflections, so we knew they’d be there in advance. But in actuality, there are imperfections in the buildings, and thus in their reflections, which make them even more beautiful.

What did you learn from this process?

That it’s super hard to make something appear so simple! I don’t think anyone will ever understand the amount of effort that went into it. I don’t regret it, and I wouldn’t do it differently. But it looks so resolved that people will probably imagine it was easy.

National Center for the Performing Arts

Bill Gates's Book on How to Save the Planet