The college of the Holy Cross has seen some dramatic changes in its 179 years. One of the country’s oldest Catholic institutions of higher learning, the school in Worcester, Massachusetts, has weathered the transition from men-only to coed, from a largely Christian to a nondenominational student body, and—just last year—from the leadership of ordained clerics to its first-ever lay president, Vincent Rougeau, also the first African-American to hold the post. Through it all, Holy Cross has maintained a consistent connection with the arts, an educational mission that Rougeau says is deeply rooted in the teaching of the school’s Jesuit founders. “Saint Ignatius Loyola, who established the order, was very interested in music,” says Rougeau. “The arts are an important part of who we are.”

They’re also an important part of what the college seems to be becoming. This month, Holy Cross welcomed a new addition to its hilltop campus overlooking downtown Worcester: the Prior Performing Arts Center, a sprawling 84,000-square-foot hub for dance, music, theater, painting, and sculpture, as well as a multipurpose social nexus for students and visitors alike. Designed by celebrated New York firm Diller Scofidio + Renfro (DS+R), with Boston-based Perry Dean Rogers, the facility is perched atop a sloping site on the terraced campus’s uppermost level, with the rest of the college spreading out in radial spokes below it. “It’s literally at the heart of the institution,” says Charles Renfro, the DS+R partner who oversaw the eight-year design and construction process. Four volumes are contained within two pairs of walls that intersect to form a nine square grid (above, and floor plan, bottom). Photo © Iwan Baan, click to enlarge

For Renfro and his team, the brief—calling for multifunctionality, for all the college’s arts programs to be brought together under a single roof—was the starting point for a simple yet surprisingly symbolic solution. “It’s a cross,” notes Renfro. Taking up the four main programmatic elements of black box theater, proscenium stage, exhibition hall, and fabrication space, the designers assigned each its own boxy volume, then placed them at the cardinal points of a nine-square grid; at the corners, the grid’s four empty squares would be occupied by outdoor spaces, with landscaped pathways leading directly into a central lobby-concourse, now dubbed “the Beehive.” While complicated a bit by the floor stack (the Iris B. Gerald Cantor Art Gallery is one level up, along with rehearsal studios, changing rooms, and with other facilities being on the second and third tiers), the architects’ direct transposition of diagram to plan means that the Prior has a cruciform layout, the same layout as Catholic churches since the late Roman Empire. The Beehive is the connective tissue between the building’s four volumes (1). Spaces around that central area include galleries (2). Photos © Brett Beyer From that germ of traditionalism, the rest of DS+R’s scheme grows in a very contemporary direction, driven by innovative technology and an ambitious pedagogical agenda. For the proscenium stage, the designers developed a proprietary acoustical material that lines the rear wall of the hall in curtainlike waves, meant to produce a crystal-clear sonic landscape. Under the art gallery, the building features a media lab where students can learn and create using Oculus VR helmets and networked piano keyboards. Over in the costume shop, teachers and pupils create elaborate outfits for each season’s productions (this semester, an adaptation of Euripide’s Iphigenia) in an airy, loftlike environment with views of the town far below—a major change from their previous digs in a narrow hallway. “It’s a huge improvement,” says Chris Goguen, the school’s fulltime faculty costume-maker. A 400-seat proscenium theater (3) sits across from a 200-seat flexible studio (4). The concrete cladding contrasts with the weathering steel (5). Photos © Brett Beyer

Packed as it is with eye-catching finishes and bold sculptural forms (particularly in the Hive, with its all-wood flooring and jagged floating staircase), the most elegant aspect of DS+R’s design is what can’t be seen at all. Theatrical architecture has long had to contend with the problem of the fly—the vertical shaft that protrudes at the rear of the structure, necessary to haul up the curtain and operate other equipment above the stage. It’s an awkward compositional dilemma, and a seemingly insoluble one; as Renfro notes, “Even at Paris’s Garnier Opera, it just sort of sticks up.” But at Prior, the DS+R team was able to use the site’s steep gradient to mask the nearly 71-foot-tall fly behind the proscenium. Placing the theater on the uphill quadrant of their planar cross, the designers buried the stage in the hillside, making the top of the fly only slightly higher than the rest of the structure. The architects then blanketed nearly the whole building in a concrete-composite shroud, a striking visual contrast to the rough-hewn steel cladding that twists and turns, interlocking with the concrete so that the wall of one pavilion becomes the roof of its neighbor—thus fulfilling the project’s “single roof” mandate almost to the letter.

Where the canopy curls around the glazed corner entryways, the narrow oculi formed in the glass are distinctly Gothic looking, another little reminder of history. But the overall effect of DS+R’s design—not to mention the creative capacities it promises to unleash—is nothing if not forward-looking, marking another step in Holy Cross’s evolving mission. “When we think of what we want to do educationally, it’s physical, it’s intellectual, it’s spiritual: it’s the whole person,” says president Rougeau. “This building really is an important part of establishing the college as a great liberal arts institution.” 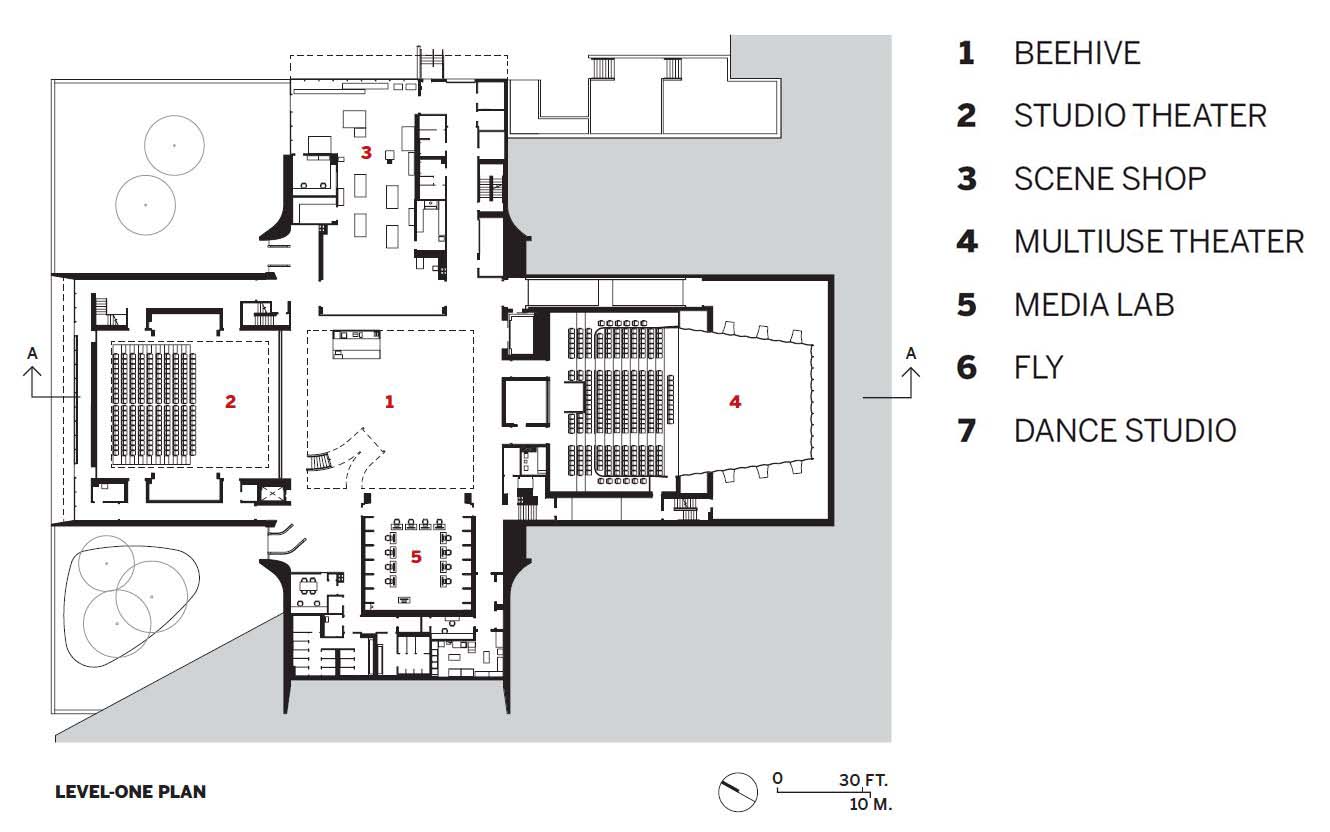 Client:
College of the Holy Cross