The Bronx residential prototype, where 17 residents died earlier this month, was an innovative housing prototype when built in the early 1970s

A horrific fire on January 9th, in a 19-story public housing building in the Bronx, killed 17 residents, 8 of them children, in the city’s worst fire disaster in 30 years. Yet the building, originally known as Site 4 of Twin Parks Northwest, was considered a model of public housing when it was built in the 1970s. 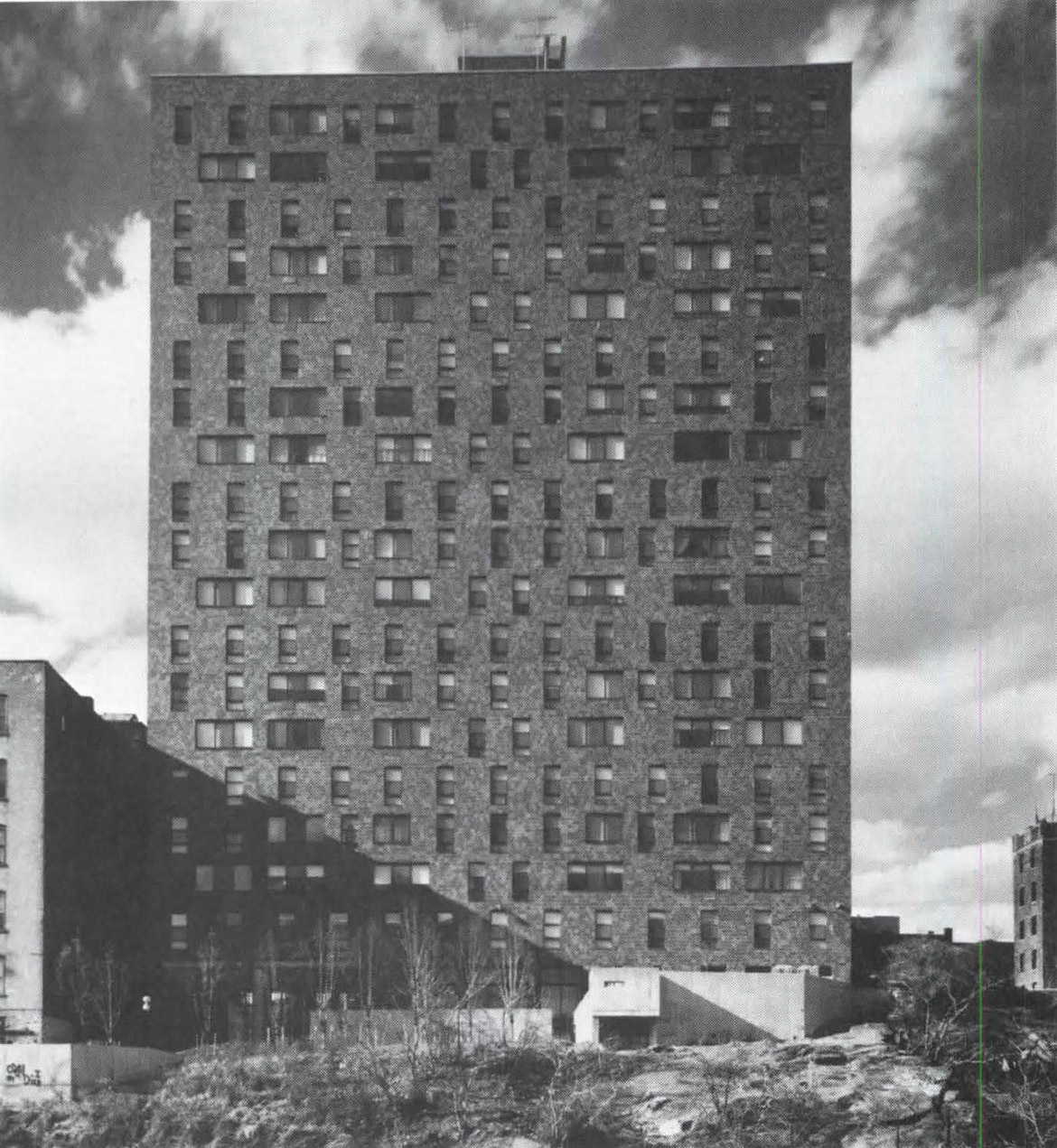 While the New York City Fire Department continues its investigations about the cause of the fire and rapid spread of smoke through the building—the victims appeared to die of smoke inhalation attempting to escape in a stair well—some may question the role of architecture in the terrible loss of life. As the public awaits the official report, we in the architectural community recognize the tragic irony of the original design intentions in this devastating catastrophe—especially at a time when the need for creating innovative low-cost housing has become more urgent than ever.

Forty-nine years ago, as an editor at Architectural Forum, I helped put together a special section on a new affordable housing project in New York, known as Twin Parks. The complex of a dozen buildings for low- and moderate-income families, located on different infill sites in the Bronx, was intended to offer progressive design prototypes in response to the many monolithic, towering, hulks prevalent in public housing. The articles in Forum included one by architect and planner Myles Weintraub and Twin Parks advocate Reverend Mario Zicarelli, giving the background behind the government effort to build the housing; the second, by Kenneth Frampton, analyzed the typologies and urban space solutions of the architecture of a cluster of the completed buildings; while the third, which I wrote, discussed the lessons to be learned from this endeavor. 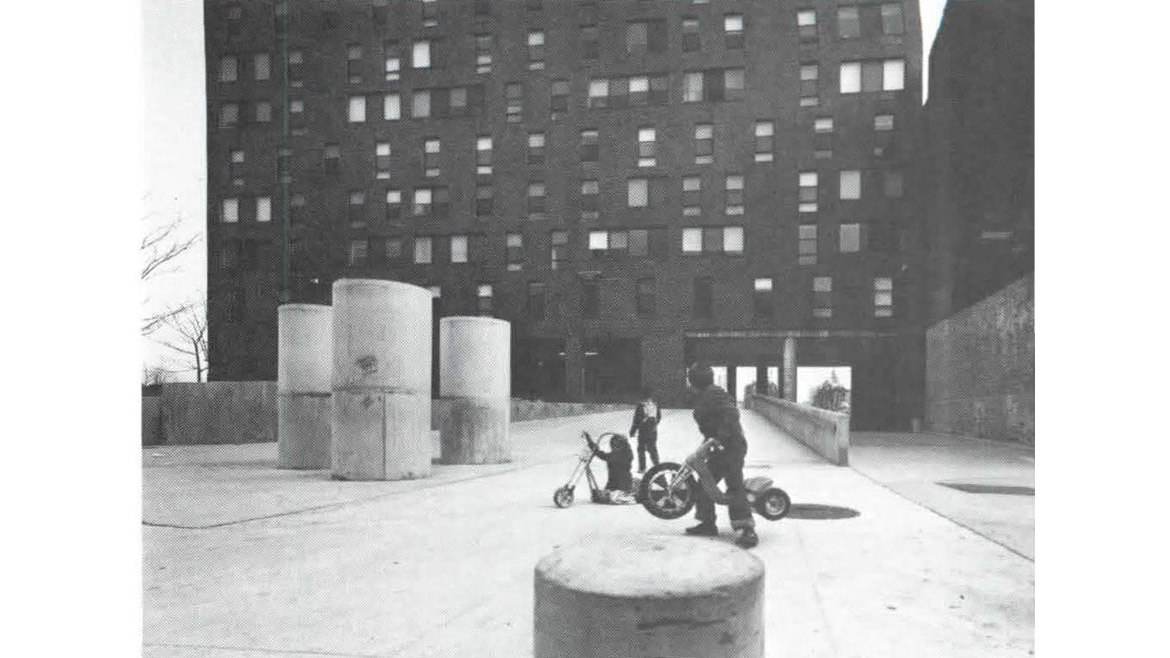 Twin Parks Northwest, Site 4, 1973, showing pedestrian pass-through, leading from the. Entrance, through the ground floor and down the hill. Photo © David Hirsch

To bring affordable housing to this area, several city agencies, including the Housing Authority,  began working with the Twin Parks Association (TPA), which had been formed by religious leaders in 1966 as a non-profit company to create low-income housing. Mayor John Lindsay’s Urban Design Group became involved in the process and helped identify the sites. Then the city initiative joined with the newly-formed New York State Urban Development Corporation (UDC), headed by the renowned planner Ed Logue. This agency was empowered to issue bonds and supersede local zoning ordinances and building codes to get the scheme up and running. The idea was to build the housing and then sell it to a limited-profit developer. The TPA would only advise: while some in the group considered this a loss of control, they were assured that design-conscious architects would be chosen under the guidance of UDC’s chief of architecture, Theodore Liebman. 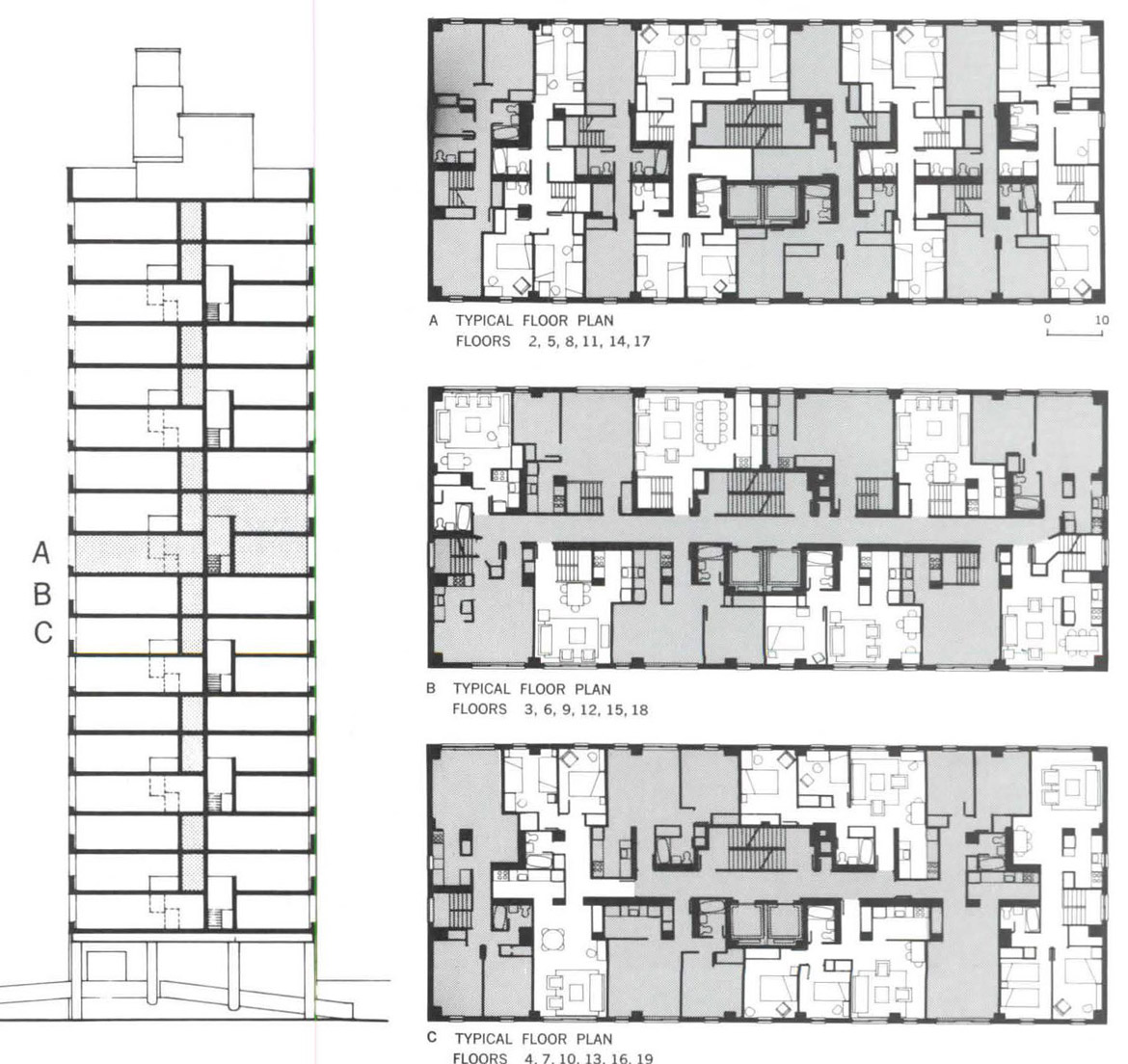 As Frampton wrote in his Forum essay, all the architects came up with concepts based on typologies that had roots in avant-garde social housing abroad, such as Le Corbusier’s Unité d’Habitation in Marseille. In addition, the designers imaginatively rethought how public spaces could tie the residential blocks into the neighborhood. Frampton cited the two Prentice & Chan, Ohlhausen schemes as “possibly among the most successful,” owing to the “security and differentiated use” of the public and private spaces. (He was less enthusiastic about the firm’s penchant for the “scalelessness” of the “homogenous” brick exteriors.) The plans of the apartments at Site 4 were especially unusual by New York standards: many were duplexes and there were 20 different apartment layouts, for households of varying sizes and configurations, that kept this building from feeling like a warehouse.

My article for Forum, on lessons gleaned from this entire venture, reported that the UDC made a highly unusual request: the agency insisted that its staffers and the architects live for a short time in the first building to be finished, Twin Parks Northeast, as the designs for the later structures were developed. After a two-week stay, they all realized they needed to undertake a more thorough analysis of residents’ life styles and cultural norms.  In interviewing some residents at the time—accompanied by the photographer Norman McGrath—I found the new occupants were quite enthusiastic about the first of the buildings, though some complained of poor maintenance—an observation that proved to be all too relevant as time went by. 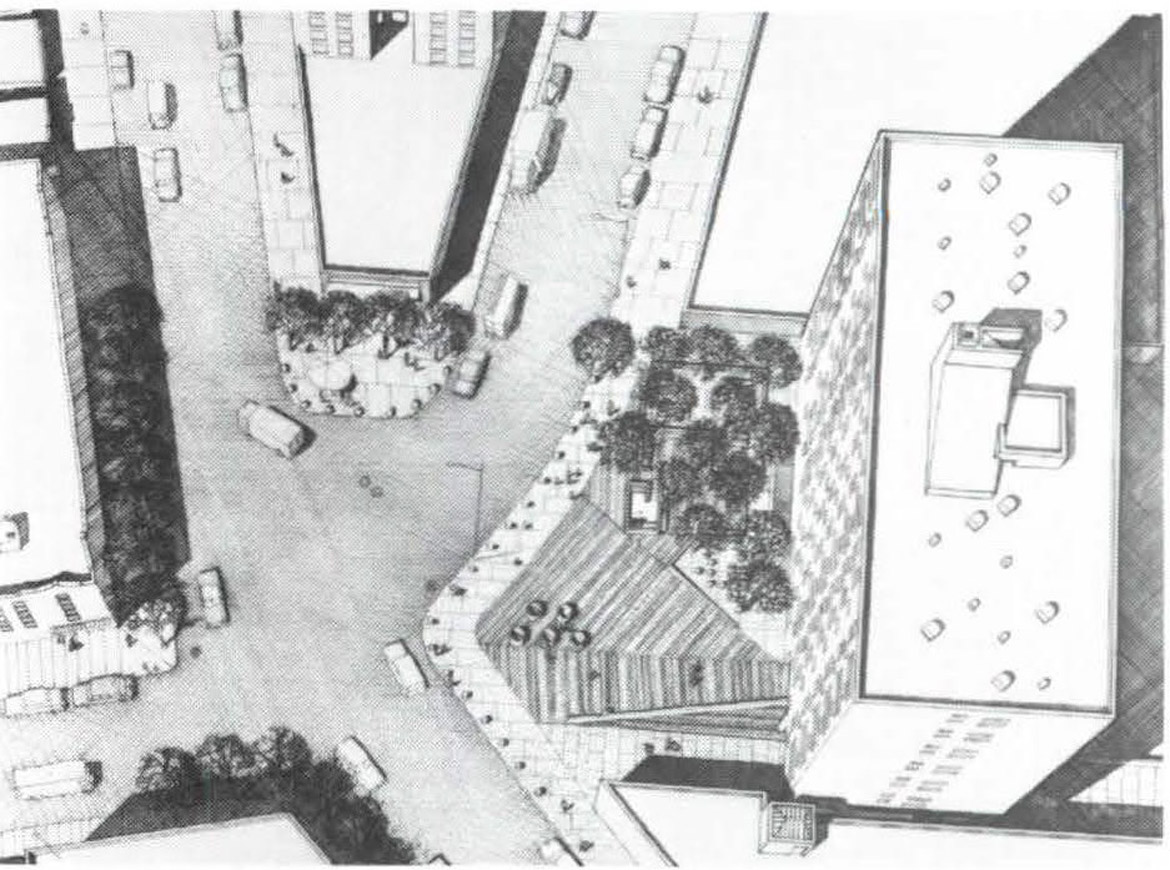 As much as we critics admired the innovative quality of the housing, I did express in the article a cautionary note about the future: post-occupancy research needed to be conducted to see how bold new ideas were appropriate for the way the inhabitants actually lived. Security concerns, obviously, were paramount, as gang violence was already a recognized problem. How well, we asked, would the Defensible Space concepts of Oscar Newman—where design encourages the ease of surveillance, of neighbors’ looking out for each other—work in practice? Also, as noted then, in spite of the successes of the different schemes by the various architects, none guaranteed the architecture would be the all-encompassing solution, in terms of social, urban, and formal qualities. Our coverage reported, too, that the kind of federal subsidies for building the Twin Parks housing were already being phased out, and there was no clear-cut replacement for such support.

The Years After Twin Parks was Built

In the years that followed the completion of Twin Parks, UDC would shut down; operating financing methods changed to rental coupons, via federal Section 8 vouchers, and the ownership and management of Twin Parks would shift again and again, with the various buildings separately sold to different owners. (More details about the process and the financing are well covered in Yonah Freedmark and Susanne Schindler’s essay on Twin Parks in the 2015 book Affordable Housing in New York: The People, Places, and Policies that Transformed a City). 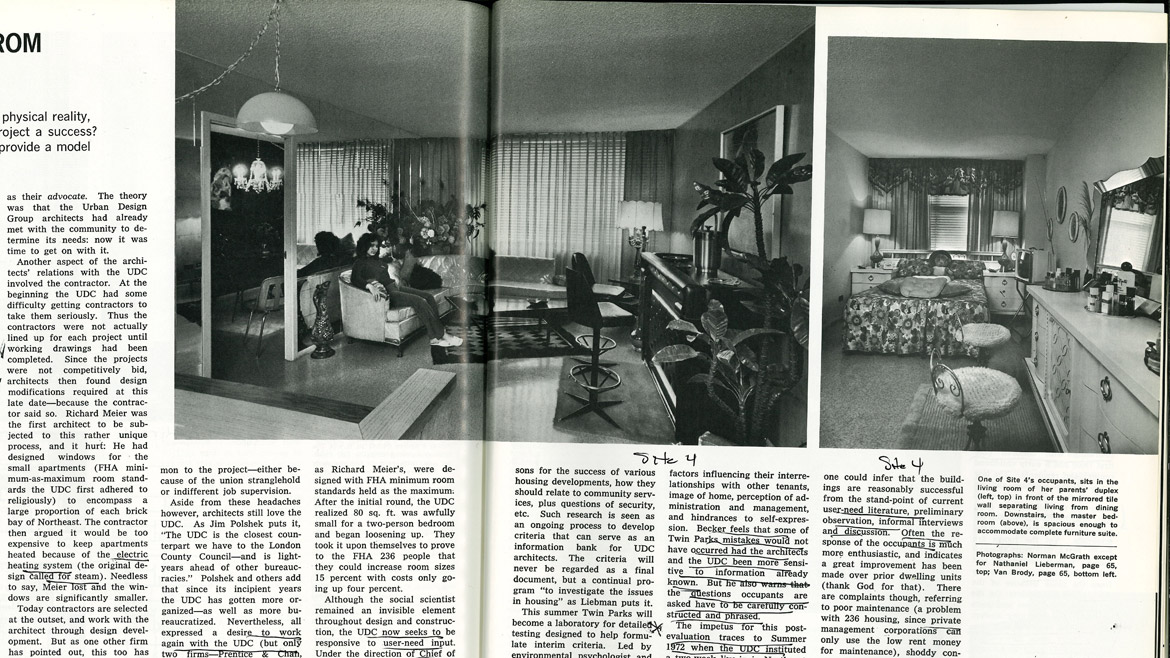 As Liebman says today about those years, the real problems were not in the architecture of Twin Parks per se. They boiled down to “maintenance and management,” which, he reminds us “is ongoing, expensive, and requires personnel.” New considerations, such as meeting ADA requirements, Liebman notes, have added to the expenses of the owners of affordable housing. Nevertheless, there are developers—some good, some not so good—who venture into this arena of real estate. In 2019, Twin Parks Site 4 was purchased by LIHC Investment Group, Belveron Partners and Camber Property Group, with Camber in charge of maintenance. This group, aka Bronx Park Phase III Preservation LLC, also purchased another Prentice & Chan, Ohlhausen building for Twin Parks Northwest, plus a handful of other affordable housing properties in the Bronx. The company now faces lawsuits regarding the lack of adequate heating (a space heater was the likely source of the fire), the failure of self-closing doors to prevent the spread of smoke, and malfunctioning fire alarms. More lawsuits may arrive along with the final report from the New York City Fire Department.

One thing we know for sure: the best of intentions conceived 50 years ago cannot guarantee the perfect answer for safe, secure housing today. Successful architecture needs a lot more than good design to keep it livable and avoid such human tragedy.