Returning to the newly conserved Brion Memorial at San Vito d’Altivole, in Italy’s Veneto region, is unexpectedly rejuvenating. Built from 1969–78 as the final resting place for industrialist Giuseppe Brion, the memorial was commissioned by his wife, Onorina, and their son Ennio, who chose Carlo Scarpa (1906–78) for the project—a roughly half-acre, L-shaped addition to a public cemetery—largely because Giuseppe Brion had admired the designer’s work. Both men shared a deep appreciation for the history of the Veneto landscape, and so his family selected a site with a view of the Asolani Hills and the 13th-century fortress the Rocca di Asolo, and, on a clear day, the Dolomites in the distance.

Owing to the close proximity of another Scarpa work—his ingenious addition to the Gipsoteca canoviana at Possagno (1957)—as well as Andrea Palladio’s Villa di Maser, each a few minutes’ drive away, the memorial can be a lively place, chockablock with bused tourists and architecture students on study tours. Yet popularity and time have not been kind to this monument: blackened and spalling concrete, decayed wood, damaged or lost glass tiles, corroded copper piping, festering fascia and joints, loss of gold leaf and plaster finishes, a badly trampled lawn, and poorly situated plantings are just a few items from a substantially longer list that led to an extensive multiyear conservation project.

Planning on this enormous endeavor began seven years ago and is ongoing, funded by a new generation of the Brion family (Onorina is now interred near her husband) and directed by the Rovigo-based architect Guido Pietropoli. The conservation—to date costing €1 million—reflects a welcome change of attitude toward Scarpa’s work, much of which has suffered in the past from mismanagement, benign neglect, or alterations and additions that offer insult rather than, at the least, simple respect.

Not licensed to practice architecture, Scarpa collaborated on architectural projects, almost invariably with former students from the Istituto università di architettura di Venezia (IuaV). One of the most knowledgeable of these collaborators, Guido Pietropoli, seemed an obvious choice to assume the conservation. The 76-year-old architect has extensive experience in conservation, initially through his work with Scarpa and, later, through dozens of his own projects. He worked on the bulk of the design and construction of Brion, and on several contemporaneous Scarpa projects, all left in various stages of incompletion when Scarpa died, after a fall, at age 72, and was interred just beyond Brion’s walls. Just how much remained unresolved at Brion is difficult to say, although a cobblestone ramp running north–south that ends abruptly at an echeloned concrete planter seems a good example. When asked about it during a recent visit to the memorial, Pietropoli simply shrugged: “I’ve never been able to figure that out.”

He explains, “I took the same approach to the conservation as the actress Anna Magnani, who cautioned a photographer, ‘Please don’t retouch my wrinkles. It took me so long to earn them.’ ” Yet Pietropoli assumed the imponderable task of preserving the original fabric of a place designed to thwart such an approach. Hence, while striving to “not retouch the wrinkles,” the nature and degree of decay, in many cases, required replacement of entire elements or large sections with new fabric. 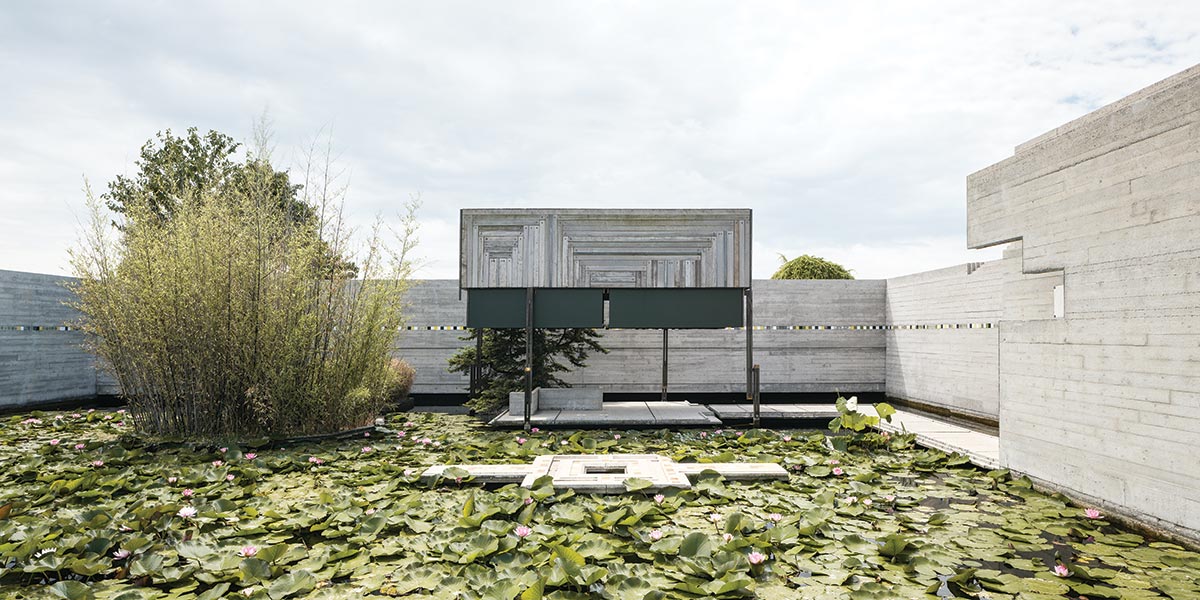 The metal-and-larch-wood Meditation Pavilion was dismantled and reconstructed with 60 percent new boards (1). The chapel is surrounded by water (2). Photos © Filippo Poli, click to enlarge. 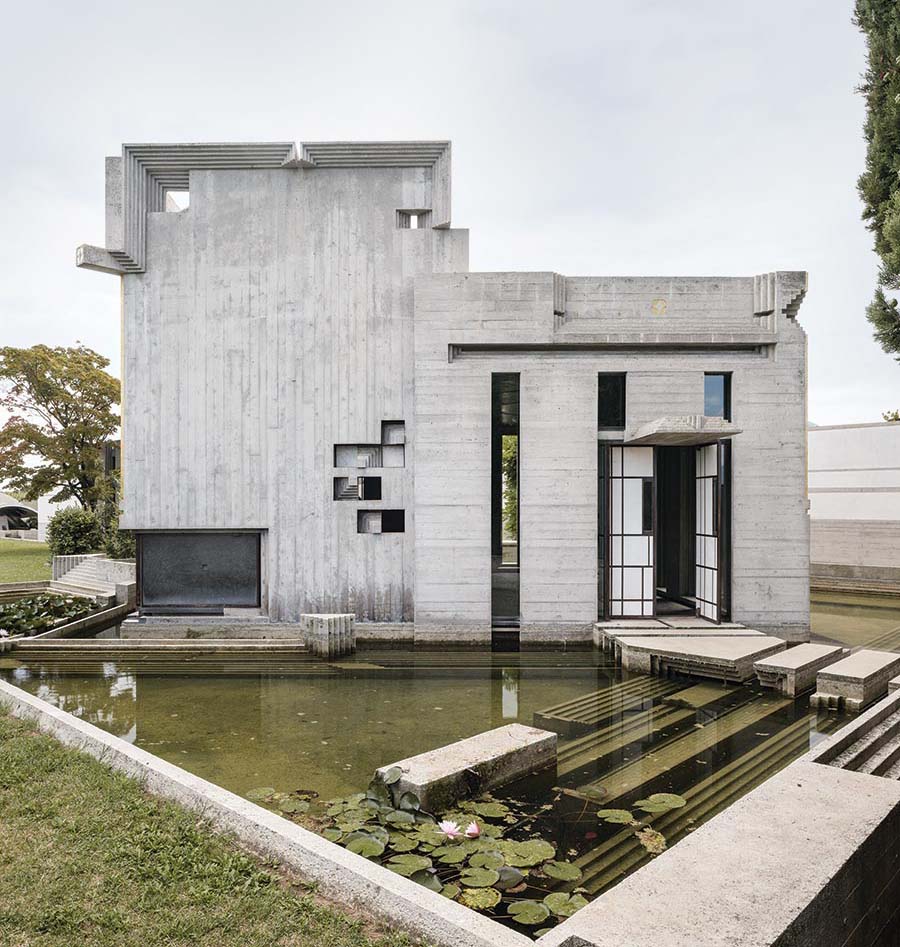 For instance, the depth of the original concrete in some areas was half of current standards, causing steel reinforcing to rust and the surface to spall. The rolling door to the memorial’s funeral entrance (less than 2 inches deep) has been entirely reconstructed with stainless-steel reinforcement. Elsewhere, layers of new concrete were added to existing surfaces to thicken areas of concern—a process that will be repeated every five years. Mold and accumulated vegetation on the concrete was removed with a spray of crushed walnut shells; the Chapel is brilliant once more with gold leaf. The bronze-and-glass door to the Meditation Pavilion is currently being re-engineered—the glazing has broken six times over its life, owing to the door’s eccentric movement. The pavilion itself—built of several types of wood and metal, and anchored in the Water Basin—posed Pietropoli’s greatest conservation challenge. It required redetailing—replacement of its interior panels and larch wood fascia. The landscape awaits restoration, planned by the Vicenza-based Camilla Zanarotti to begin this year.

The memorial’s two means of entry can confuse visitors. The funeral portal, which one sees first upon arrival, is not the principal entrance. Yet many visitors begin here, arriving at an open-air receiving area, affording access to the Chapel on the left and a covered walkway on the right leading to the arcosolium, the memorial’s center. This bridgelike structure, one of Scarpa’s several references to ancient Roman practices (including the plaster exterior finishes), is a concrete arc covering the sarcophagi of Giuseppe and Onorina Brion, which sit in a circular depression. 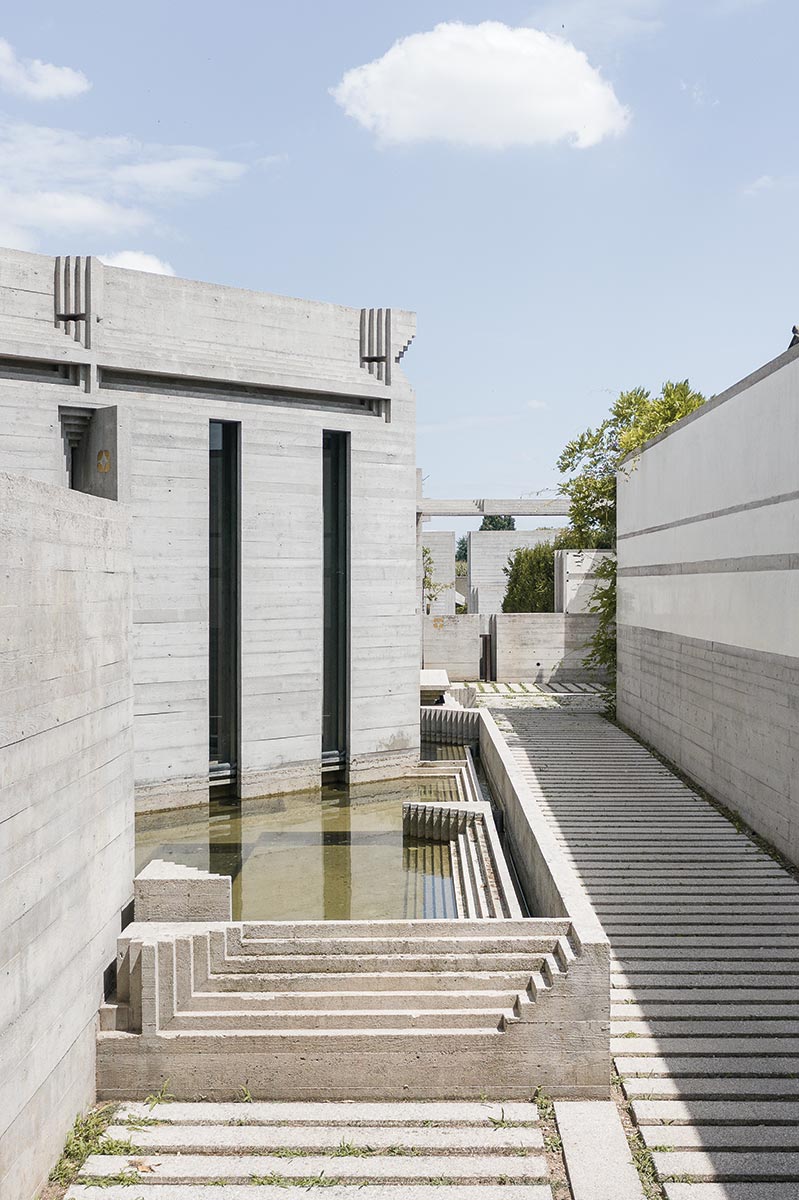 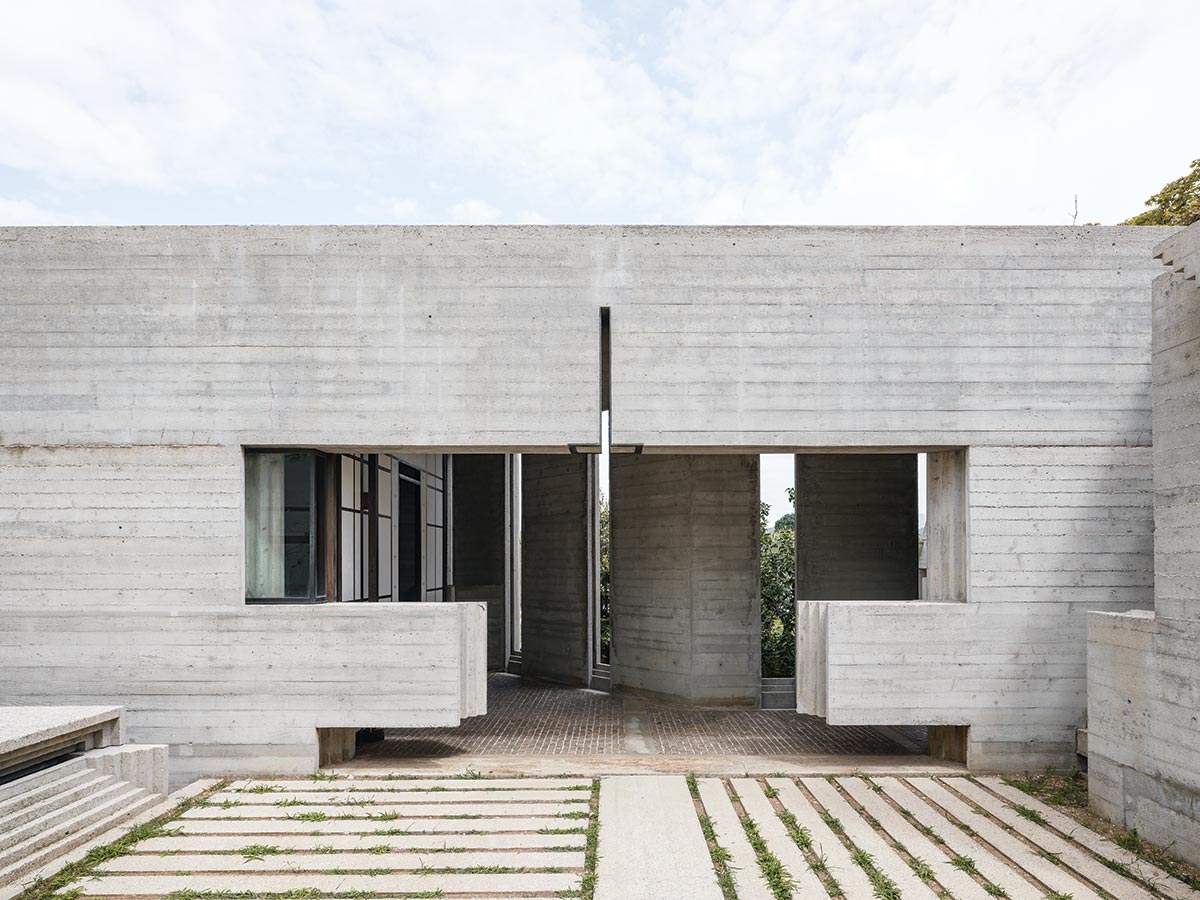 From the funeral entry, one encounters the Chapel and, beyond, the receiving area (3). An opening in a portico leads to the Chapel and arcosolium (4). Photos © Filippo Poli

But if entering via the public cemetery, visitors instead negotiate a concrete antechamber, perpendicular to the propylaeum (a rectilinear enclosed passage). From there, the first view of the memorial’s enclosure is of the lawn (prato) through a window of interlocking circles constructed of bronze frames, one set with blue tesserae, the other pink. At the window’s center is an almond-shaped mandorla, a Christian sign of sacrality appropriated from ancient Roman iconography. To the left is the arcosolium; to the right is the Meditation Pavilion, closed off by a glass-and-bronze door that lowers, guillotine-like, into the water flowing beneath the propylaeum. The open concrete structure for relatives to gather (la cappella dei familiare) typically completes most inventories of the memorial’s set pieces. Yet the battered, sloping concrete wall enclosing much of this enclave is the least appreciated, and arguably most important, of the memorial’s architectural components. 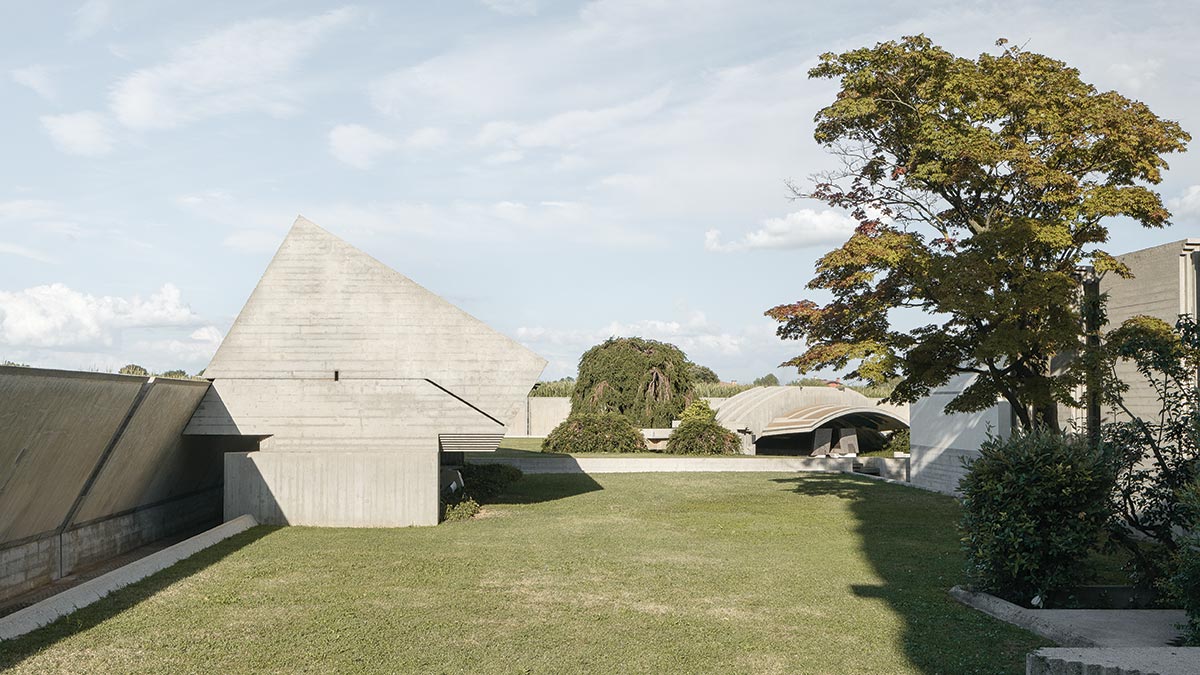 The angular Chapel for family members and the arcosolium tomb abut a lawn. Photo © Filippo Poli 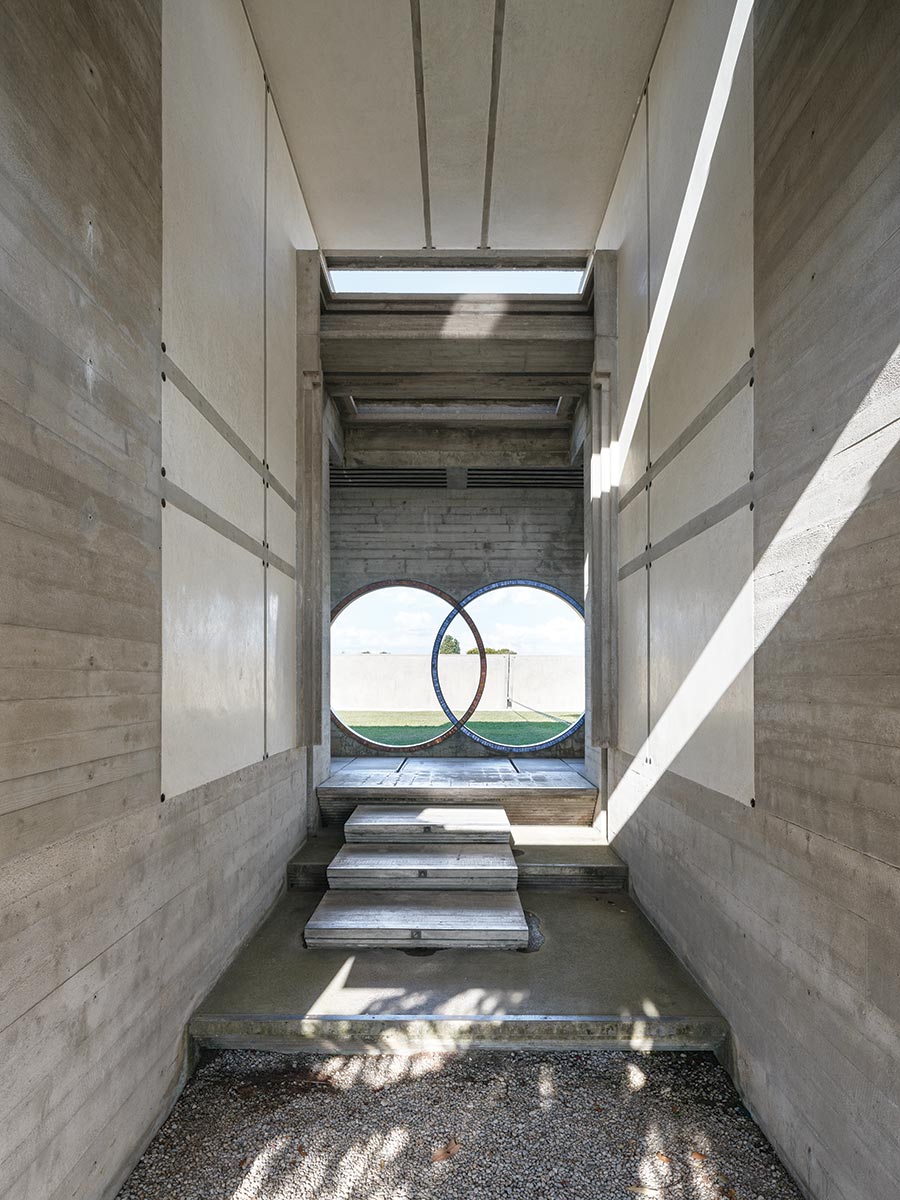 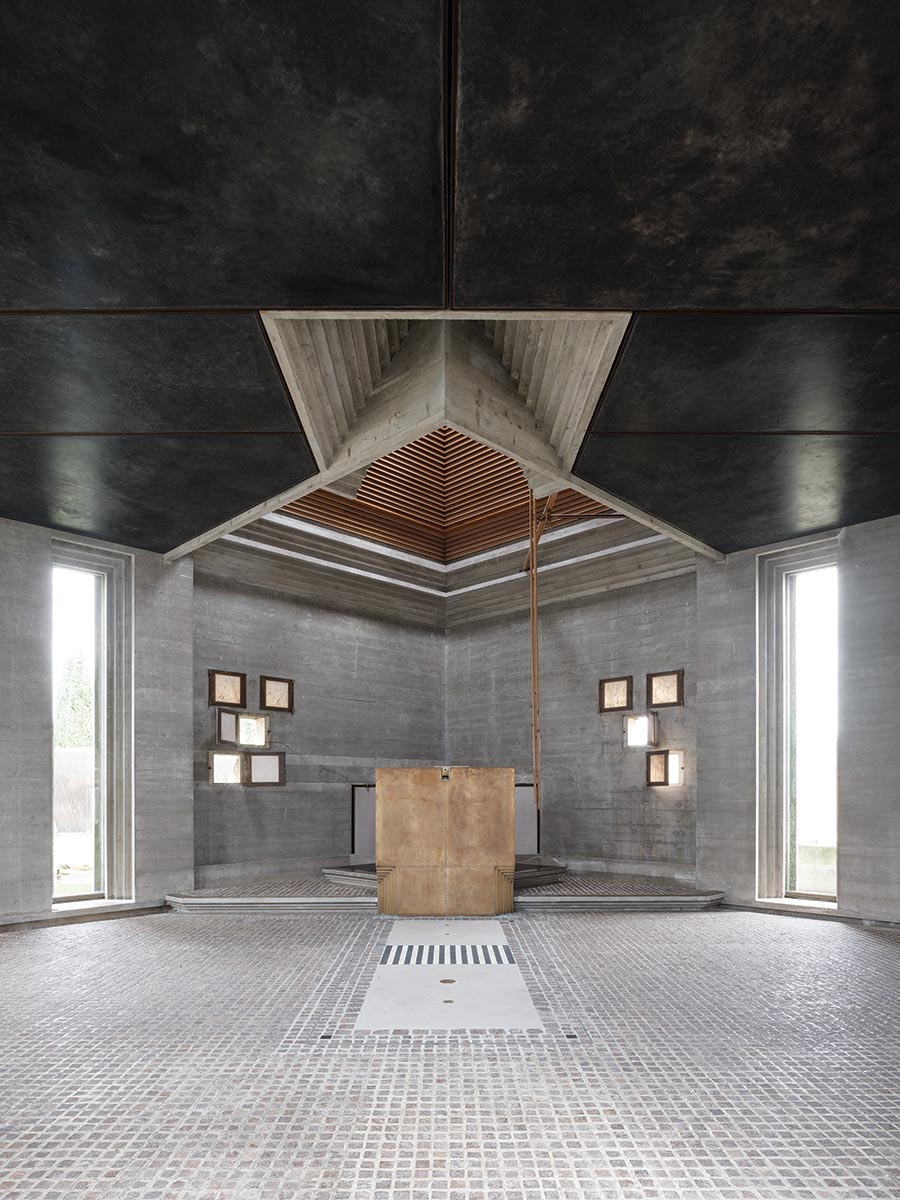 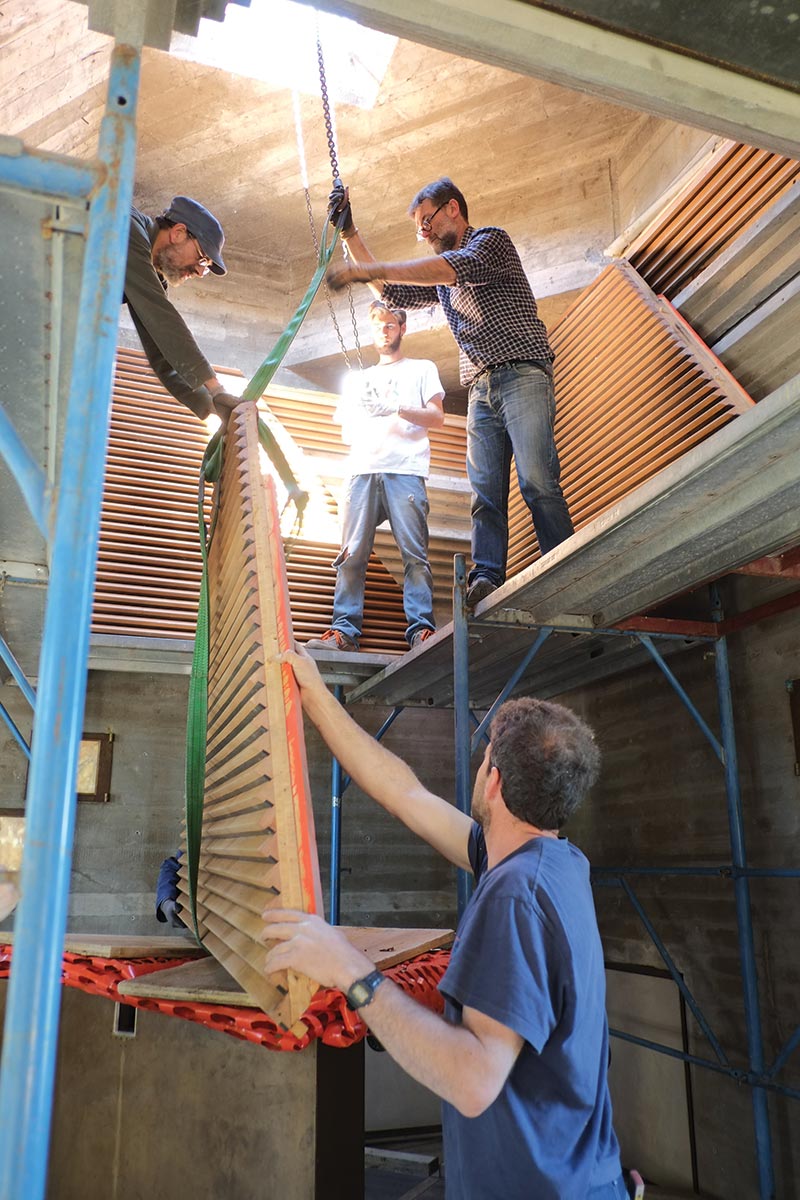 A window of interlocking bronze circles set with tesserae looks out to the lawn (5). The trapezoidal panels of pearwood and ebony that line the pyramidal dome above the altar (6) were rebuilt (7). Photos © Filippo Poli

During Brion’s construction, Scarpa obsessed about whether he had made the wall high enough to block out the view of nearby residential developments from the memorial’s interior. The wall and the propylaeum together signify something fundamental about the memorial, perhaps obvious today, but not so during Scarpa’s lifetime: the memorial is, above all, a garden.

When it was still under construction in the 1970s (while the war in Vietnam and global unrest continued to unfold), IuaV students vandalized the memorial as a political affront—too much spent on too few. Today, those same students may return, as practicing architects or faculty, to this place restored, valorizing it less as a tomb in homage to accumulated wealth than as a site of architectural and garden art, where the visitor’s body takes refuge and the spirit is restored. 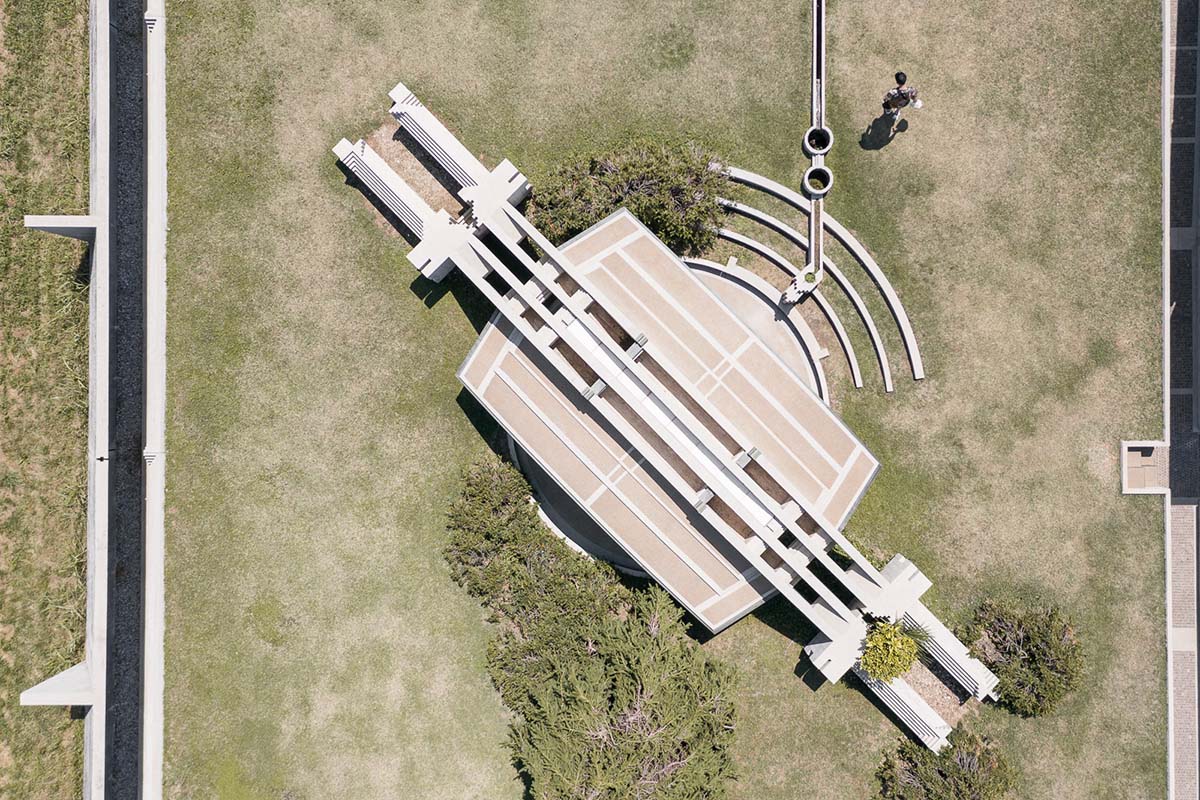 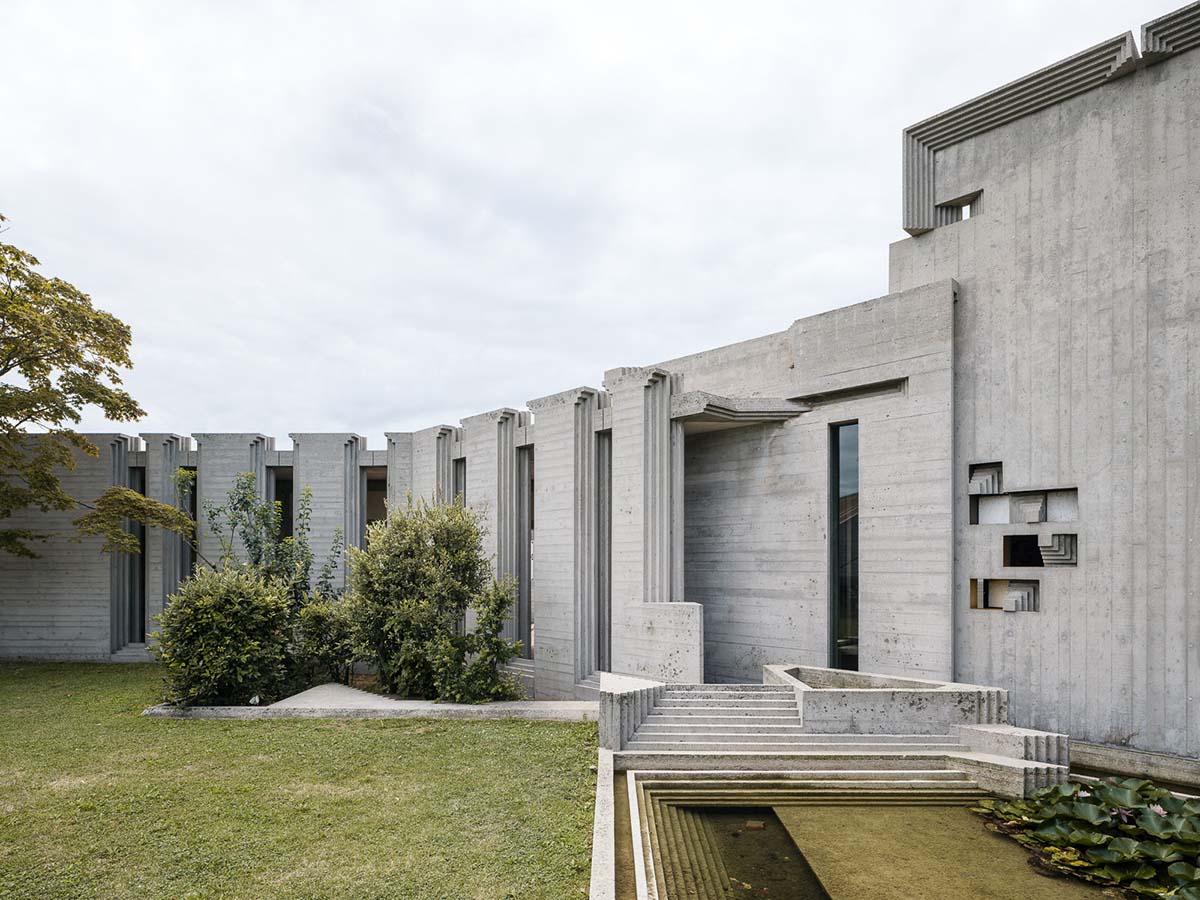 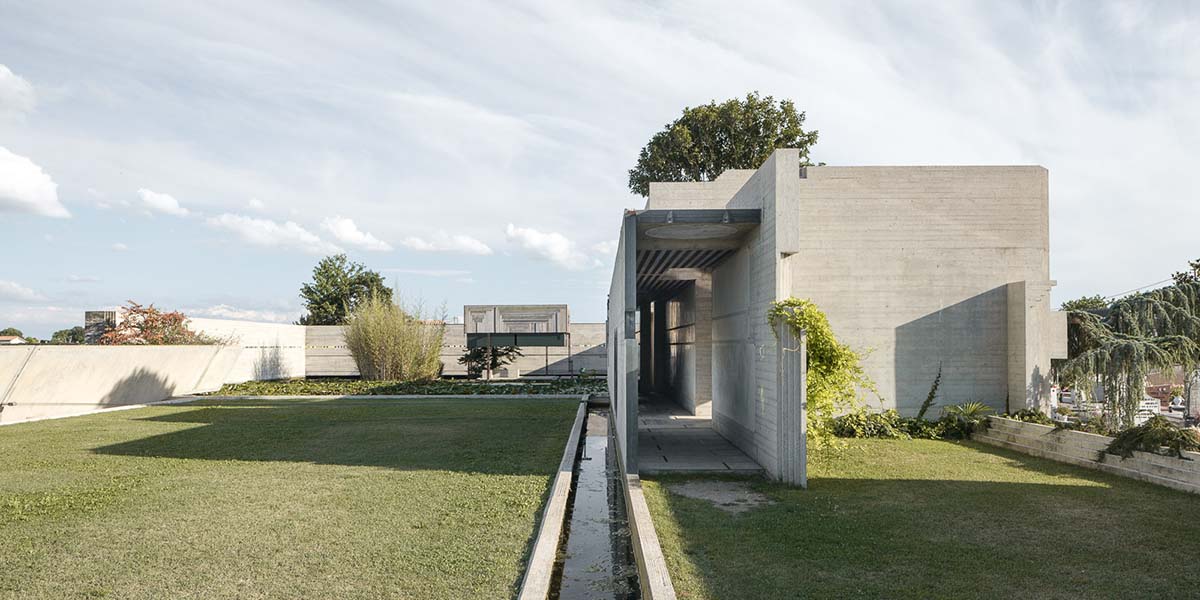 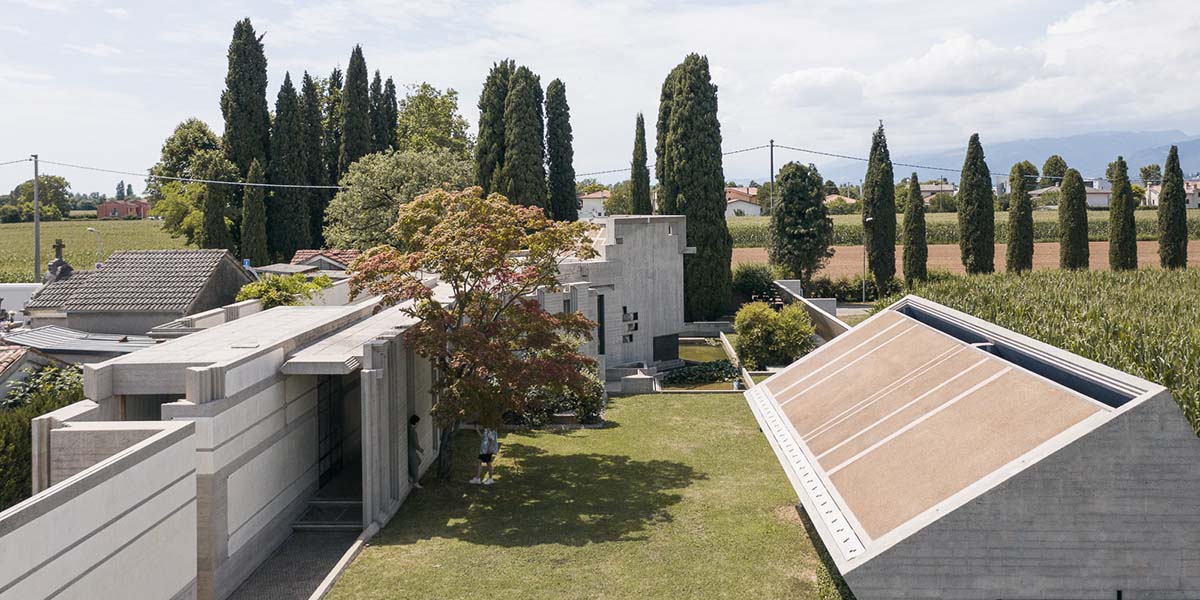 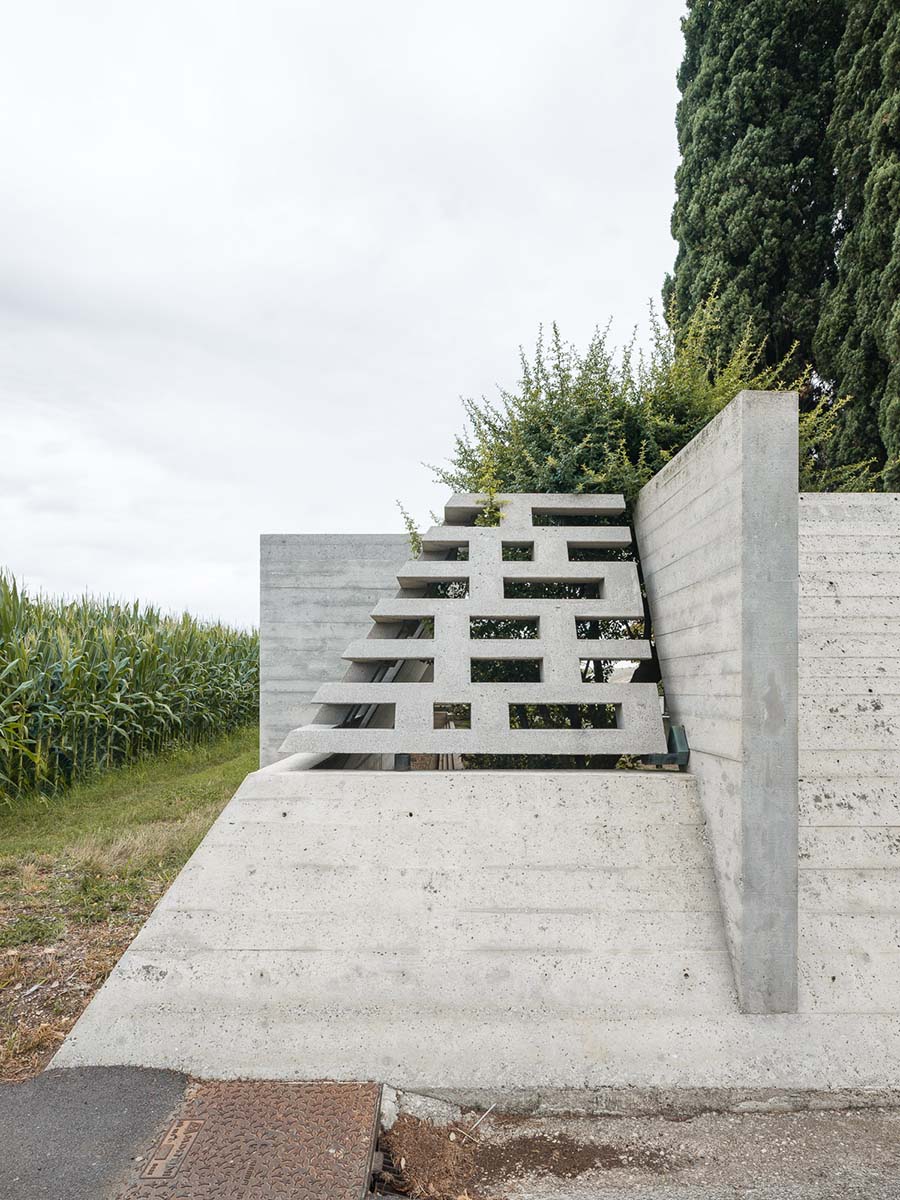 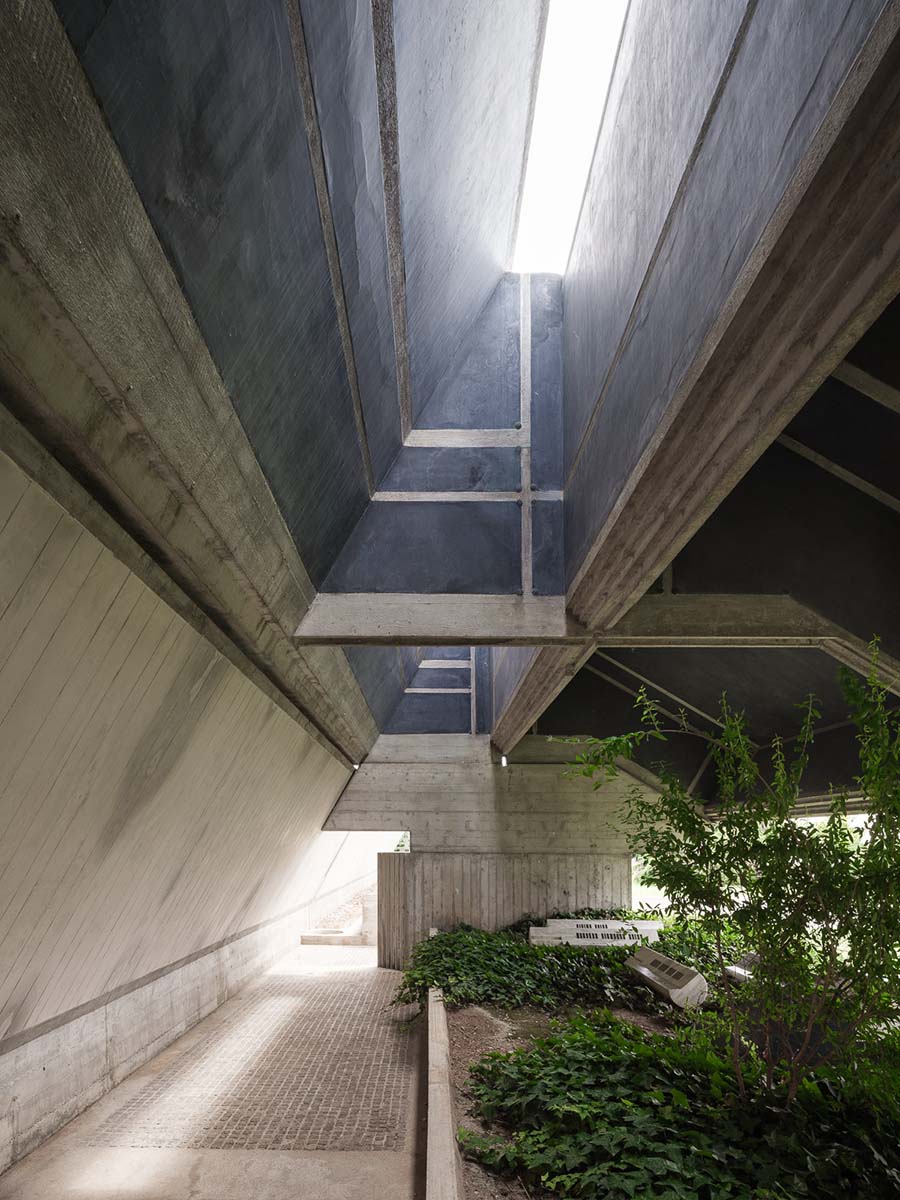 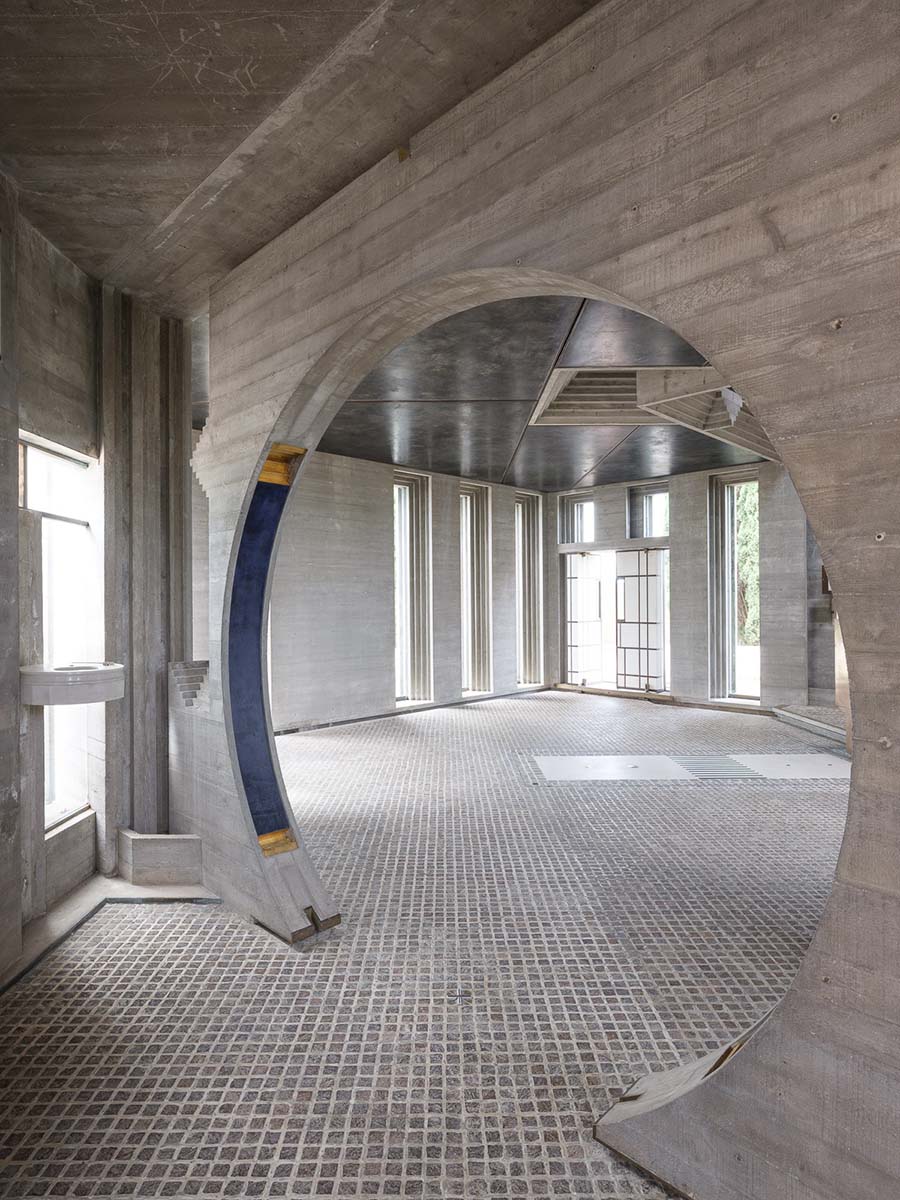 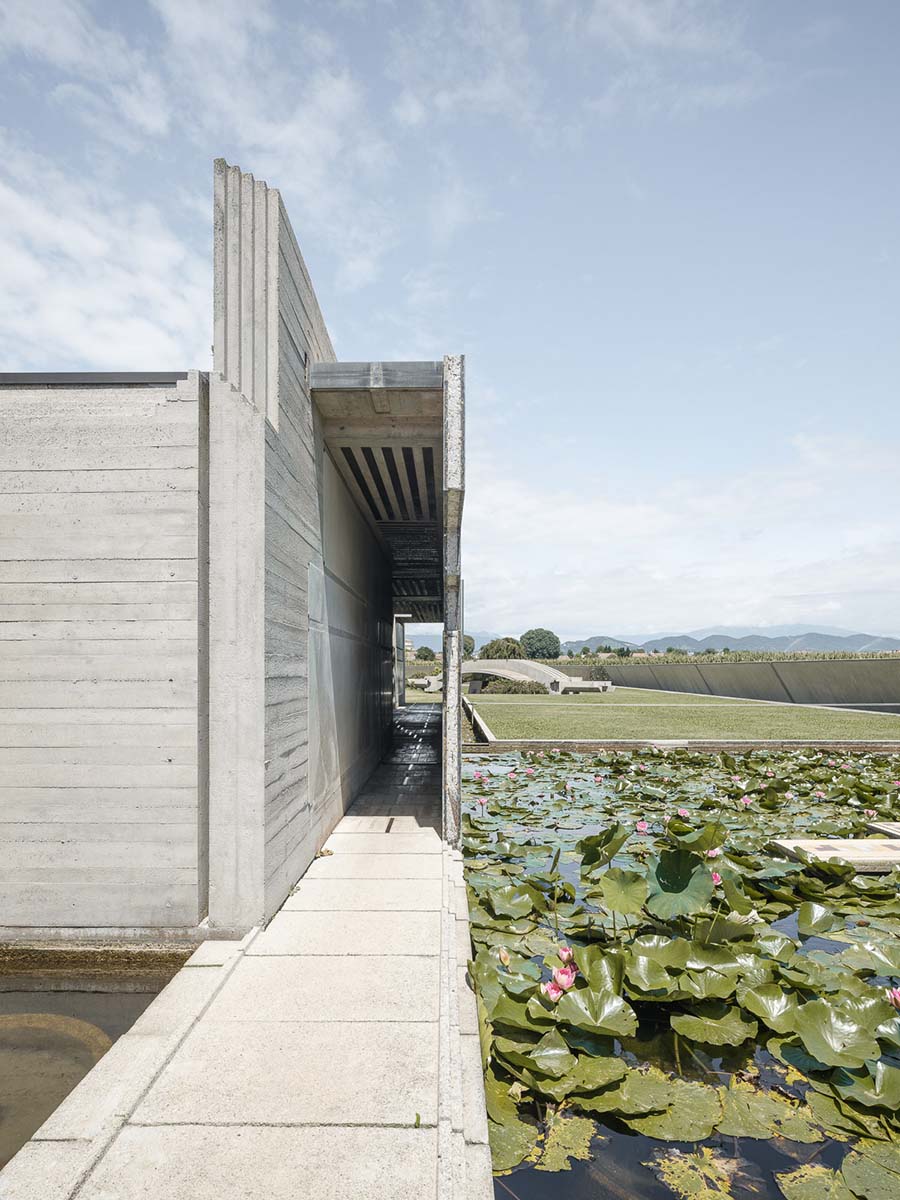 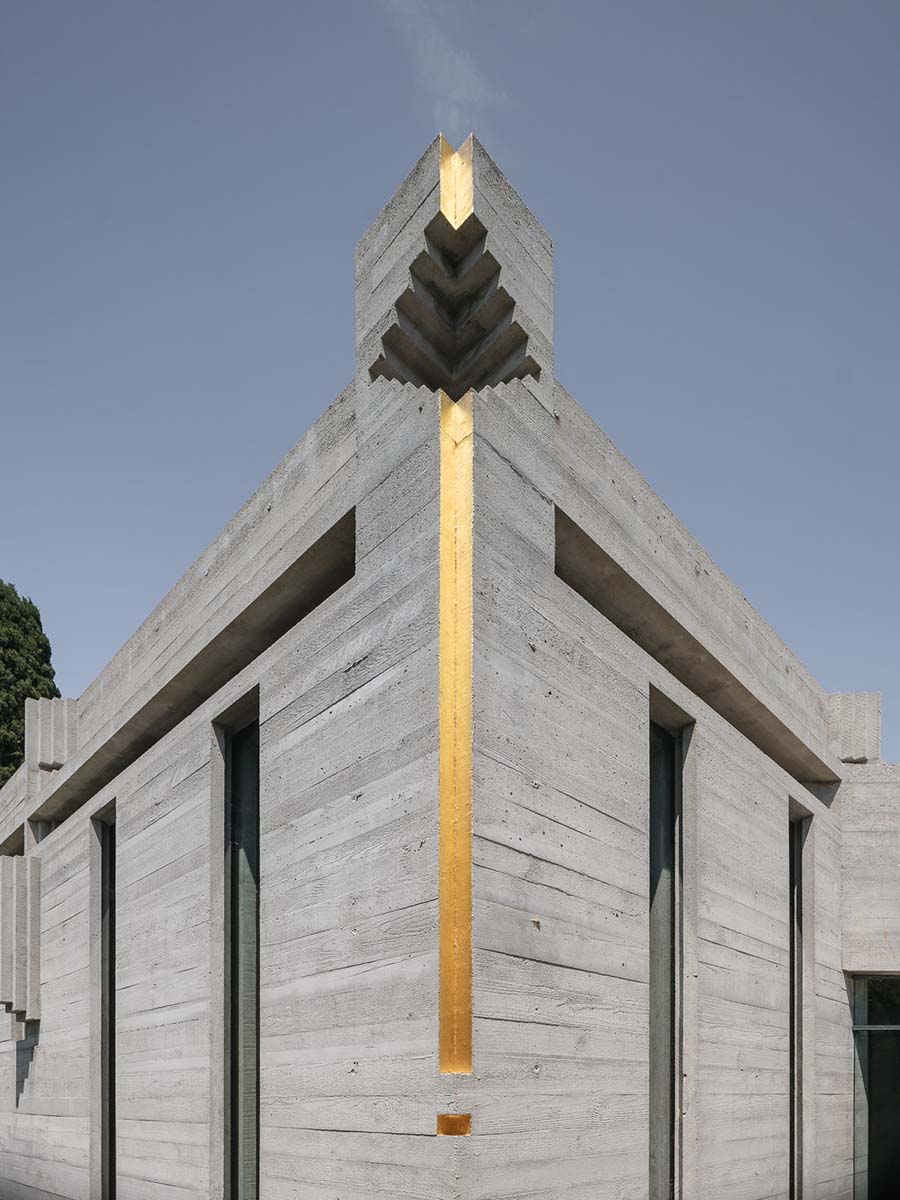 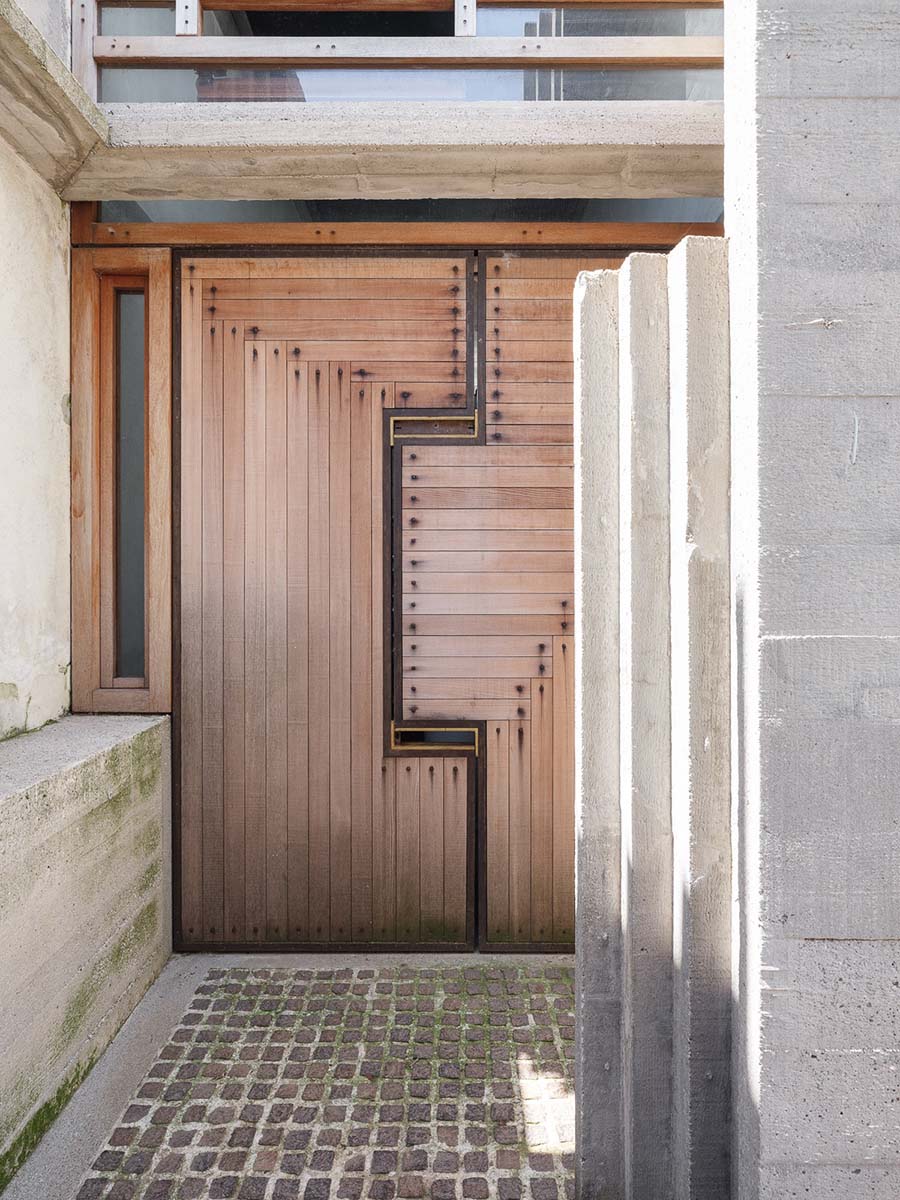 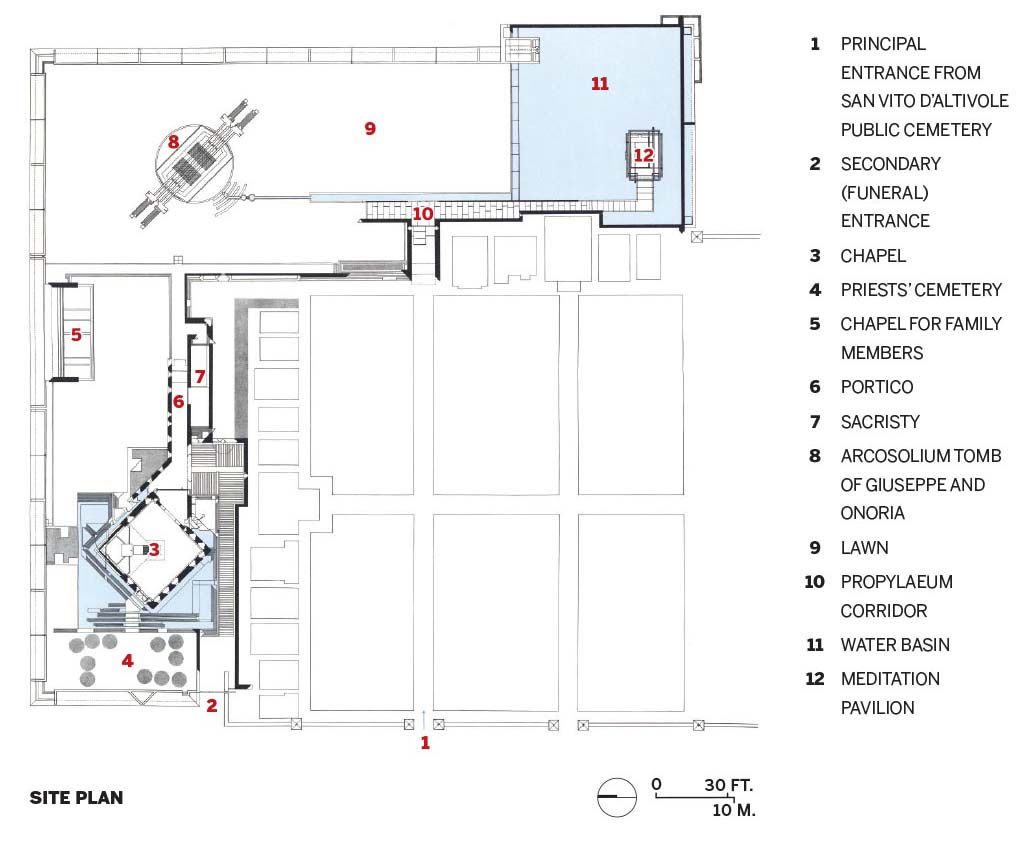