This website requires certain cookies to work and uses other cookies to help you have the best experience. By visiting this website, certain cookies have already been set, which you may delete and block. By closing this message or continuing to use our site, you agree to the use of cookies. Visit our updated privacy and cookie policy to learn more.
Home » House of the Month: Mammoth House by Architecture Research Office
Residential ArchitectureHouse of the Month

For many years Los Angeles doctors Diana Yao and her husband Glenn Izmirian, along with their two children, shared a house with two friends near Mammoth Mountain, California, a ski resort east of Yosemite in the Eastern Sierra range. Then Izmirian saw a small plot of land, only 8,000 square feet, in a residential neighborhood closer to downtown Mammoth. His wife, a gastroenterologist who was on call in L.A., agreed they should buy it. The family is superathletic, the kids were nearing adulthood, and they all liked going there year-round to ski, fish, hike, bike, and scull. 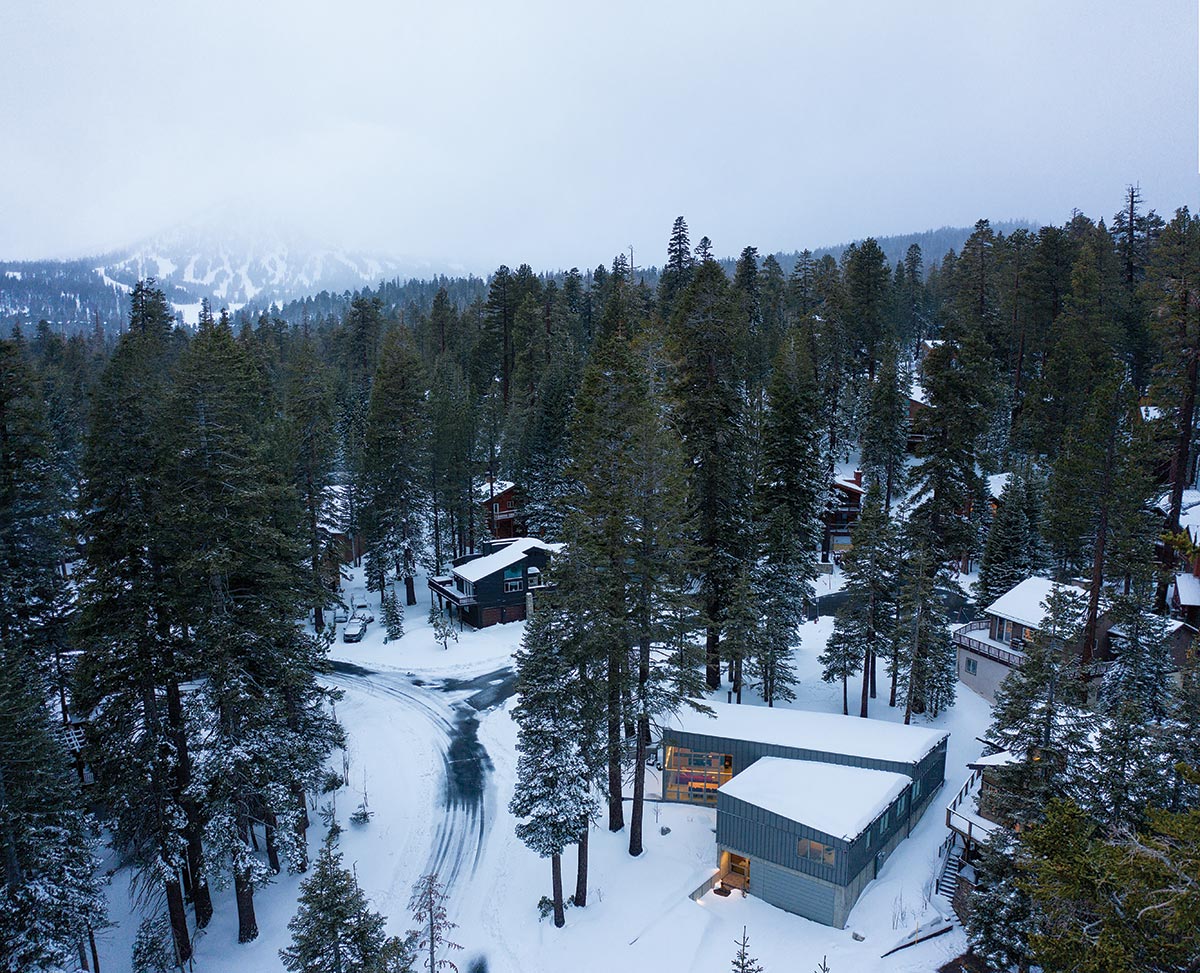 The joined volumes clad in gray-painted steel accommodate various functions on a tight site (above). The living/dining area and kitchen receive south and east light from generous window walls (top), while a wedge-shaped portion of the bedroom wing contains the garage and main entrance underneath. Photo © Jeremy Bittermann

“The neighbors are close,” says New York–based ARO principal Kim Yao, Diana Yao’s younger sister whom they commissioned to design the house. “But what they really wanted was a year-round retreat within walking distance of the village and the gondola so their kids (and guests) could venture out on their own without need of a car.” It also needed to be a simple, easily maintained house made of durable, straightforward materials.

The four-bedroom, 3,720-square-foot house has a wood-framed structure, supplemented by a steel moment frame and prefab wood roof trusses. The exterior is wrapped with steel cladding on the walls and the shed roof, all painted a muted gray: “My brother-in-law knew it would be unusual to have such a contemporary steel house in that neighborhood, so he asked that the steel not be too reflective,” says Kim. “He was right; there was no pushback from the neighbors. We even get compliments.” 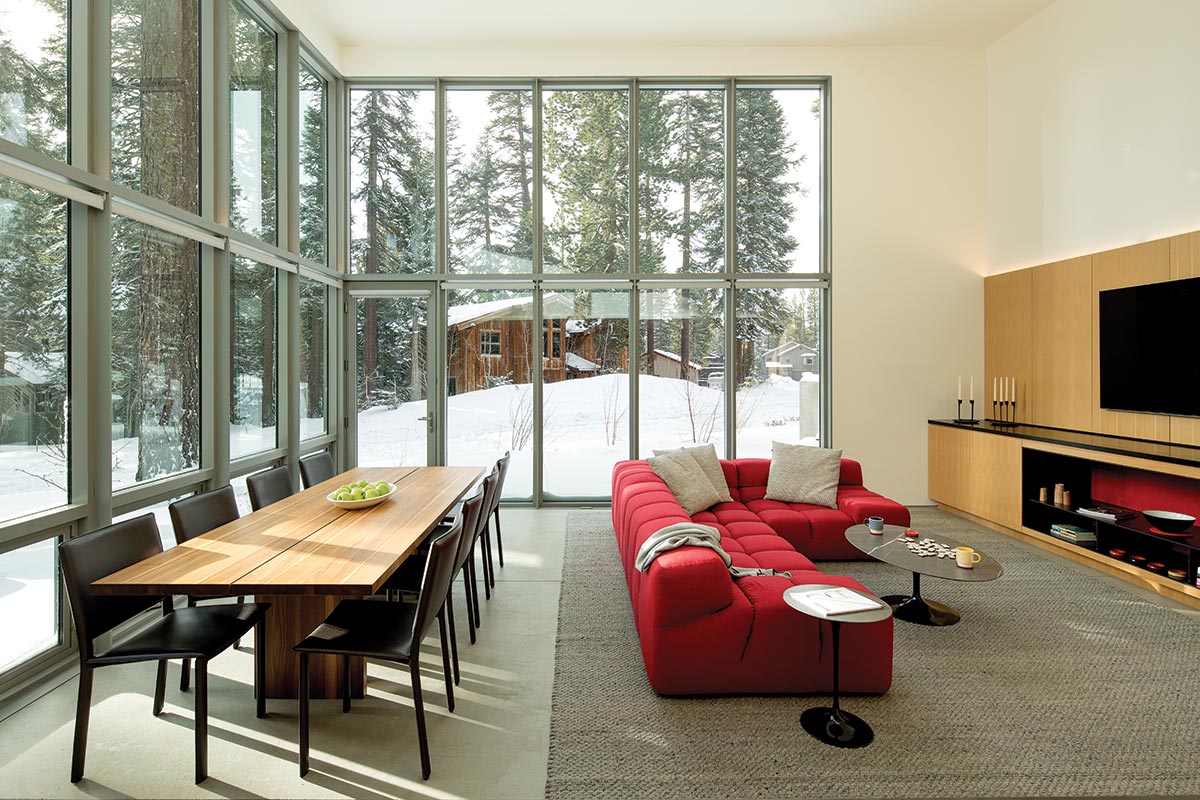 The glazed expanse of the living and dining area (1 & 2) looks into pines. Photos © Jeremy Bittermann 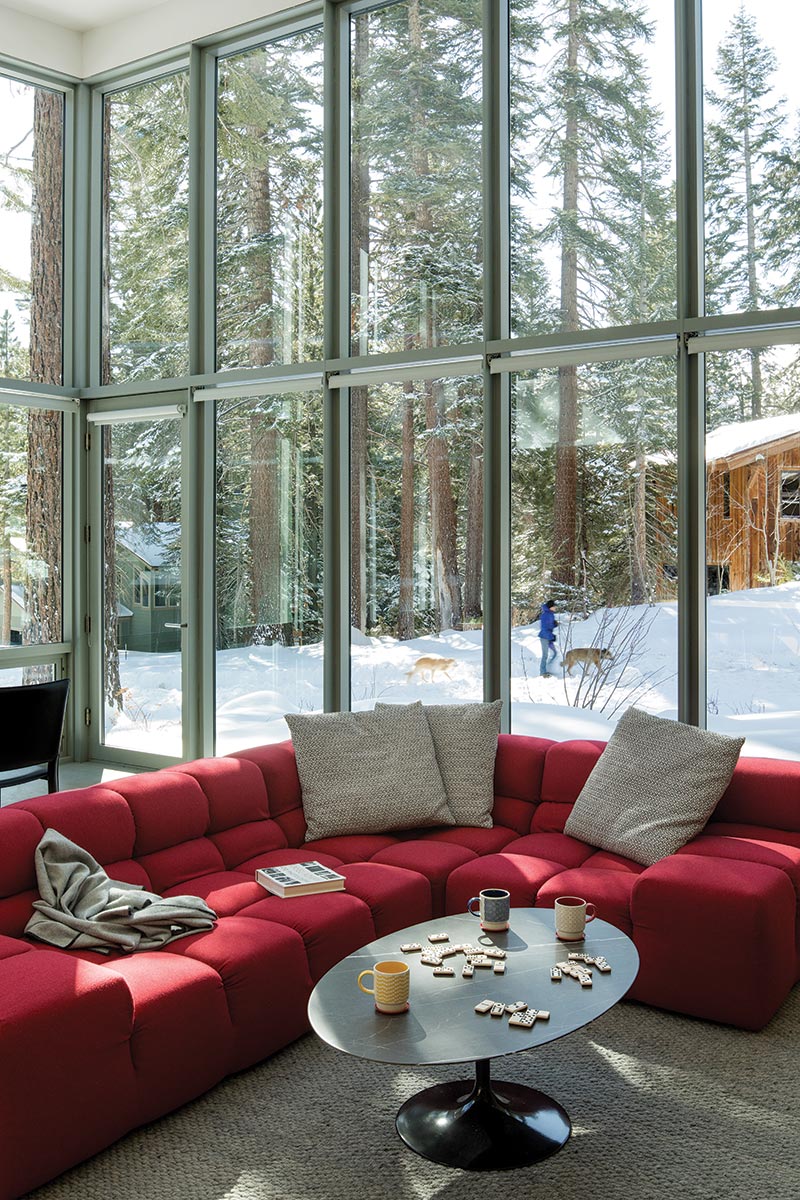 The house is composed of two sloped-roof volumes that intersect: one has an ample living/dining area and kitchen, where a large, double-glazed window wall faces south and east as it turns a corner to offer views of the mountains, while providing passive solar heating. In back of public spaces are bedrooms; an adjoining wedge contains the main bedroom on this level, with the garage, a workshop, and the entrance below, where there is a drop in grade.

Five geothermal wells provide radiant heat in the winter and cooling in the summer. “It took an extra year to drill the wells,” Kim says. “But Glenn wanted an energy-efficient house and considered it a long-term investment.” The couple were careful to remove as few of the surrounding pine trees as possible. 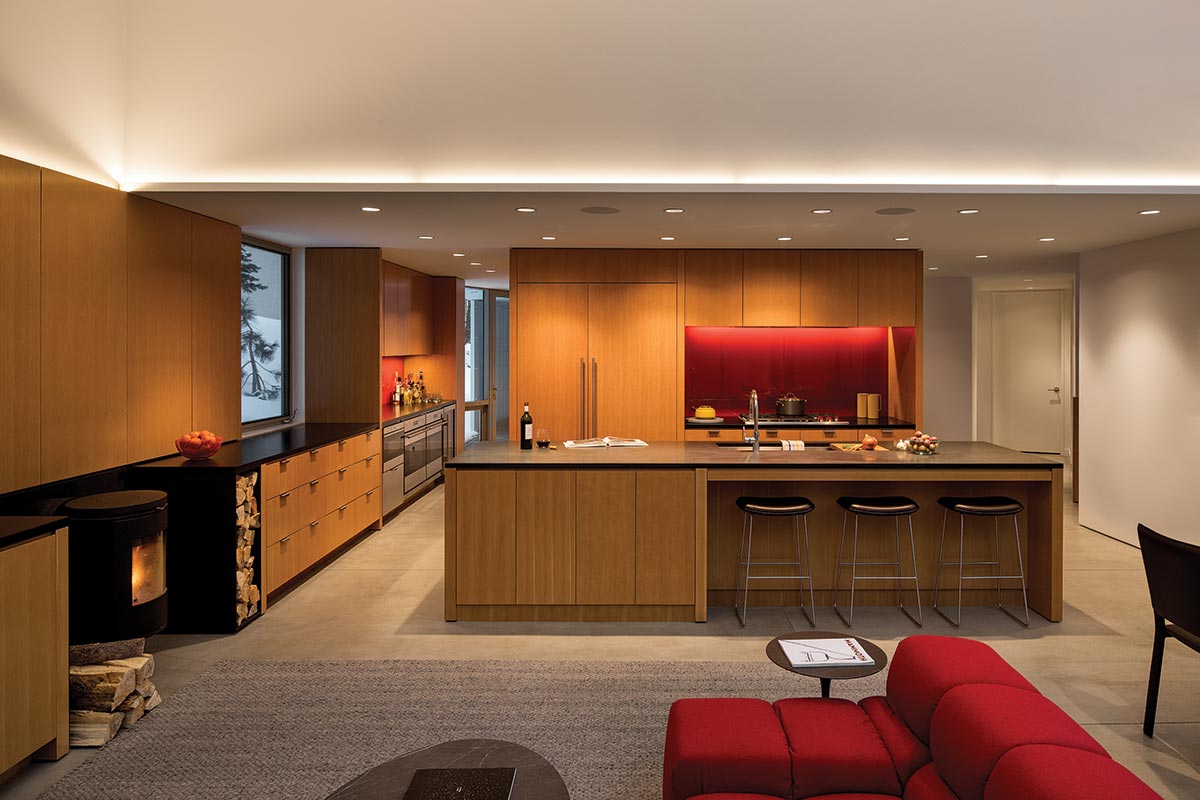 The interior is simple, with concrete floors, white gypsumboard walls, and Douglas fir paneling. “Kim and I decorated the house together,” Diana says. “Kim had ideas, and my husband and I chose things.” Kim notes that “they were the easiest clients ever. They said, ‘We are not designers. We did it because we wanted to do it with you.’ ” Both clients and the architect couldn’t be happier with the house; in fact, they just spent Christmas there together.