Spectators of the 2022 Super Bowl might not have been expecting a lesson in urbanism during the halftime show, but that is what they got, thanks to the visions of British designer Es Devlin and producer/rapper Dr. Dre. Taking cues from Ray and Charles Eames’s 1977 film Powers of Ten, the show began with footage zooming through the universe to earth, to California, to the streets of Compton—Dr. Dre’s birthplace—before zooming back out to show the recognizable Los Angeles street grid projected into the palm of Dre’s hand. Dre, seemingly orchestrating a control board for the entire stadium, then turned up the lights and launched into a whirlwind musical and architectural tour of Compton and Long Beach.

Atop a backdrop of Google Earth satellite imagery of a night view of the Compton street grid laid over the field, the set for the halftime show featured local landmarks and cultural touchstones lined up along Compton’s Rosecrans Avenue (with some artistic license taken to bring elements of Compton and Long Beach together). “We cast each of the buildings as characters in the narrative,” Devlin, the show’s creative director, told RECORD in an email. “The details of the buildings are unified by their tone: bone-colored shades of stone pale grey, like neon-lit museum pieces, to be remembered as a series of forms and frames for the human story within them.” Although Devlin has a portfolio filled with past performance designs—from stage sets for Adele, Beyoncé, and U2 to Olympic opening ceremonies—she says Dre was more interested in her studio’s art installation works, such as Forest of Us at Superblue Miami and the 2020 Dubai Expo’s UK Pavilion.

The set, which was bookended by the Compton Courthouse and the Martin Luther King Jr. Memorial—two elements of Harold Williams’s 1977 Compton Civic Center—tied together places imbued with meaning for the performers. One of the set modules was a version of a Tam’s Burgers, which Kendrick Lamar referenced in his 2017 song Element. Beside it in the set was Eve After Dark, a club that had a backroom studio where Dr. Dre recorded Boyz-N-the-Hood with Easy E of N.W.A. (Appropriately, the interior portion of the Eve After Dark replica became the set for rapper 50 Cent’s 2003 hit In Da Club.) Out front, matching white lowriders nod to Compton’s car culture, an embrace of hydraulics enabling vehicles to dance down the streets. 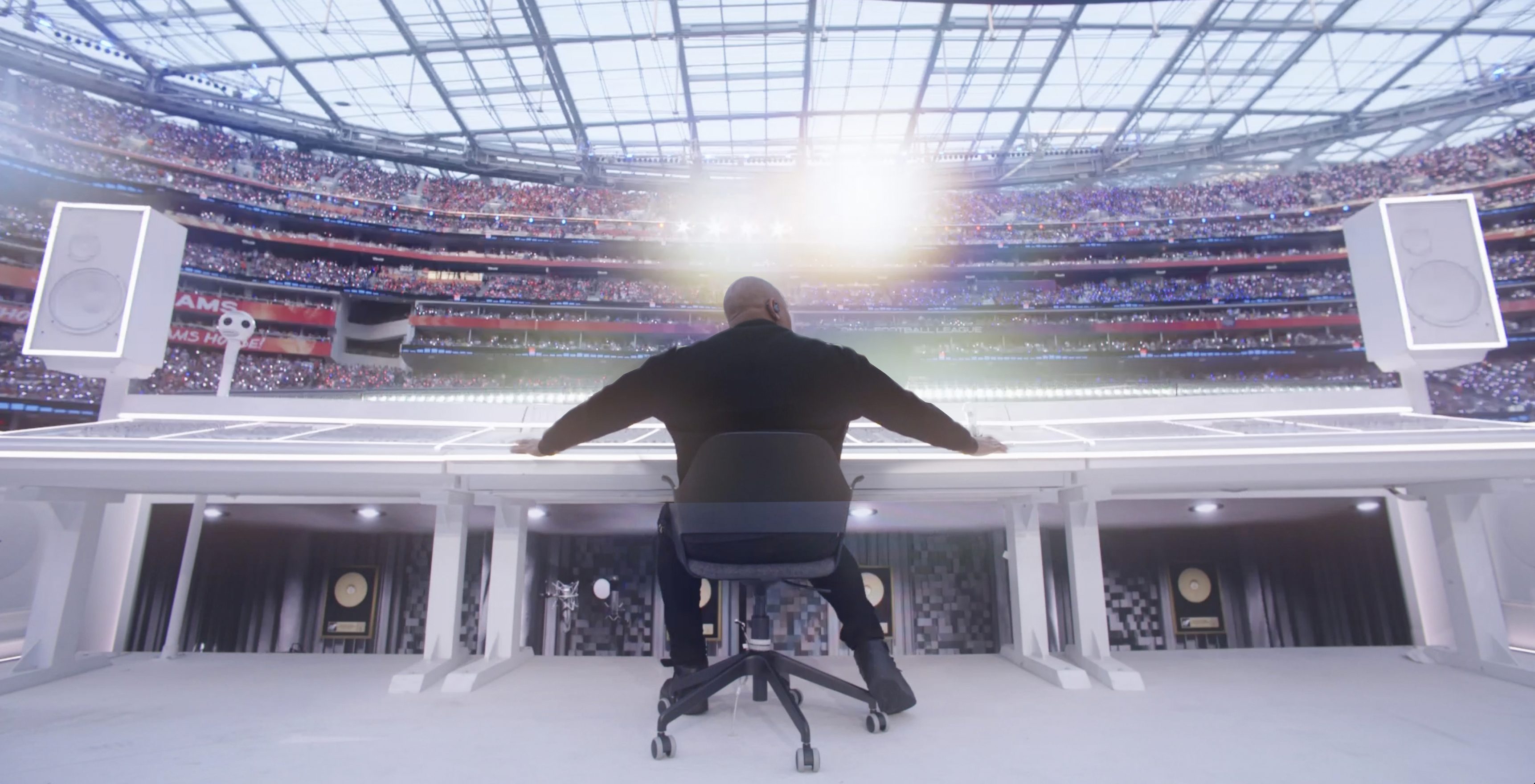 In 1992, Snoop Dogg and Dr. Dre shot a music video for Nuthin But a G Thang featuring a lowrider and a house in Long Beach, the city where Snoop Dogg grew up; in this show, Snoop Dogg performed on the “rooftop” of a set piece based on that house before descending into a living room filled with family photos. These elements combine in establishing what Devlin called the “placeness” of Compton, which she experienced for herself on a tour of the city last year with Kendrick Lamar’s creative director, David Free. “[Dre] sensed that Compton would be another protagonist in the work,” Devlin said, “and that we could etch a map of Compton on the global Super Bowl stage.”

Within these domestic-scaled spaces, it was easy to lose sight of the surrounding environment, whether that was the immediate vicinity within Inglewood’s $5 billion HKS-designed SoFi Stadium, or Compton, about 10 miles away as the crow flies, or Los Angeles as a whole. The stadium itself, despite strong efforts from landscape architect Mia Lehrer at integrating a massive entertainment complex into the city’s fabric, has faced criticism for being another lever of displacement for Inglewood residents, with surrounding areas being cleared of homeless encampments in the weeks preceding the big game and neighboring residents missing out on the benefits offered by the developers: tree plantings in medians do little to curb the negative overall effects of a vast, auto-centric cityscape. Critic Alissa Walker tweeted about the missed opportunity for developers to connect the stadium to public transit.

But on a positive note, commenters on Twitter praised the show’s reference to California’s legislation allowing accessory dwelling units (ADUs) and the implicit call for a revitalized commercial corridor in the area. And the show succeeded at highlighting L.A.’s Black culture, from the recording studios that produced some of rap’s biggest hits to the locales that shaped the lives of the show’s star performers.

Devlin is quick to credit her collaborators on the show, including choreographer Fatima Robinson, and the producer Bruce Rogers, who figured out how to install and remove the halftime showpiece within minutes. As for Dre, he proved that he still has love for the streets upon which he grew up. With this production, as Devlin put it, he was “transposing lived experience from a very specific place, into music, which reaches and touches a global audience.”