World Expos, which are held once every five years, normally run from May 1 through October 31. Given the summer heat in the Persian Gulf, the 2020 Dubai Expo was scheduled to open in October. Then the pandemic led to a year’s delay, which was a godsend for countries – including the U.S. – that hadn’t finished their installations on time. Still labeled Dubai 2020, the Expo is now expected to open its gates on October 1. And what gates! The British designer Asif Khan created a trio of portals made of carbon fiber threads (enough to reach from here to the sun) wound by robots into elegant latticework panels. Doors as high as a six-story building will swing open and closed at the start and end of every day. 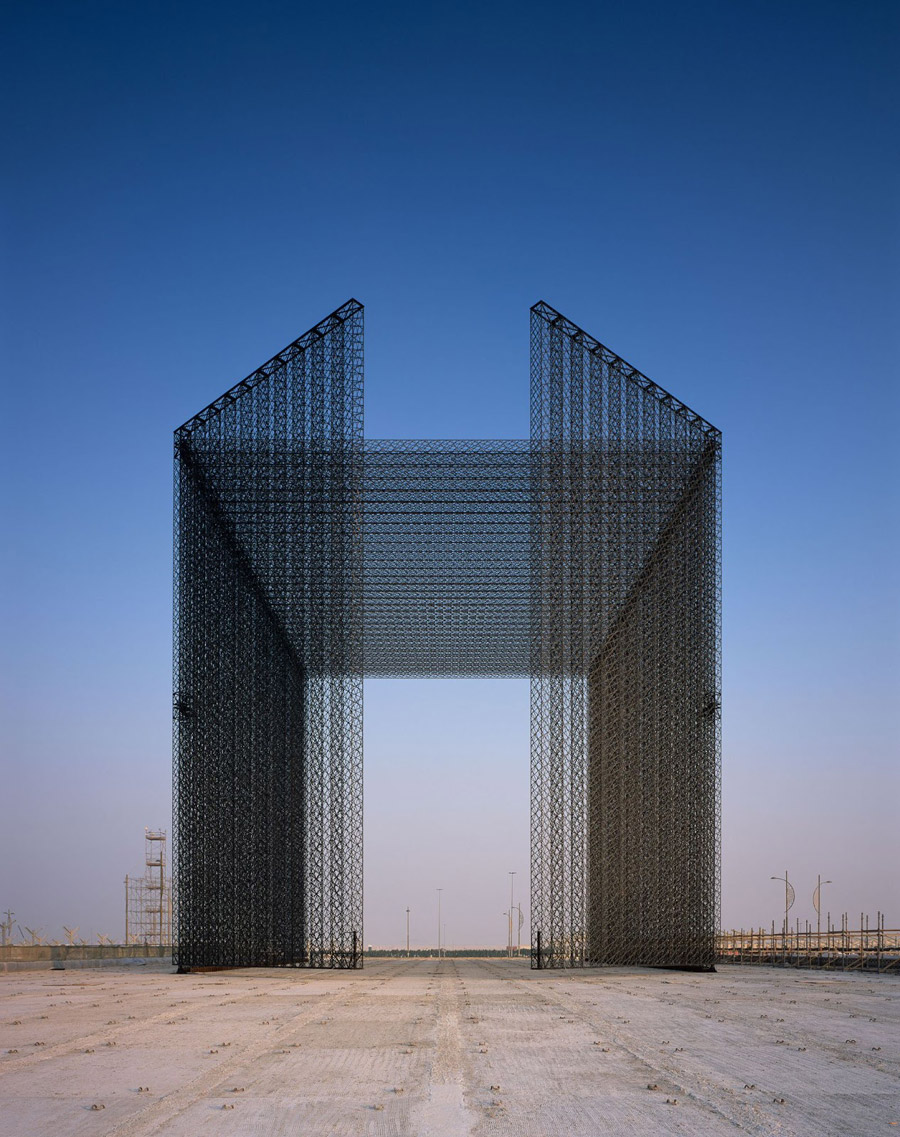 London designer Asif Khan created three identical portals to the Dubai Expo. This is one of the portals in its partially open position. The carbon fiber doors are six stories high but so light workers can easily reposition them. Photo © Hélène Binet

Indeed, there may be nothing as spectacular inside the fairgrounds, with the possible exception of the filigreed, 425-foot-diameter dome designed by Chicago’s Adrian Smith + Gordon Gill Architecture as the Expo’s centerpiece. The plaza under the dome is expected to be 4 to 8 degrees Celsius cooler than the surrounding area, due, in part, to the use of concrete elements at and below grade as thermal masses. Video projections on the inside of the self-supporting steel dome are stunning – the attraction is being billed as “the world’s largest 360-degree immersive projection.”

But, sadly, the Expo Authority built two hotels and three office buildings so close to the dome that they steal some of its thunder. Reached by phone in Chicago, partner Gordon Gill said those buildings didn’t bother him, “since we designed them.” And he is sure the dome and the five buildings will remain standing after the fair, since his firm also created the plan for using the site as an innovation district after the Expo closes at the end of March 2022.

The Expo itself, master planned by HOK with Populous and Arup, covers nearly 1,100 acres, not counting the adjacent parking lots for 26,000 cars. But once visitors have parked and walked through Khan’s vast portals, transportation options will be limited. Mostly, there are miles of paths, shaded by canopies of photovoltaic fabric. Buses will move around the perimeter of the Expo, and a limited number of individual golf carts, with drivers, can be booked in advance. By contrast, the 1964-65 New York World’s Fair offered half a dozen ways to get around, including a monorail overhead and gondolas above the monorail, and several kinds of trams at grade. The relative lack of options in Dubai seems ironic because mobility is one of the three themes of the Expo (the others are opportunity and sustainability). Each is represented by a massive theme pavilion. The mobility building, by Foster and Partners, contains what the Expo is calling the biggest passenger elevator in the world. The opportunity pavilion by Madrid-based AGi Architects is focused on self-improvement. 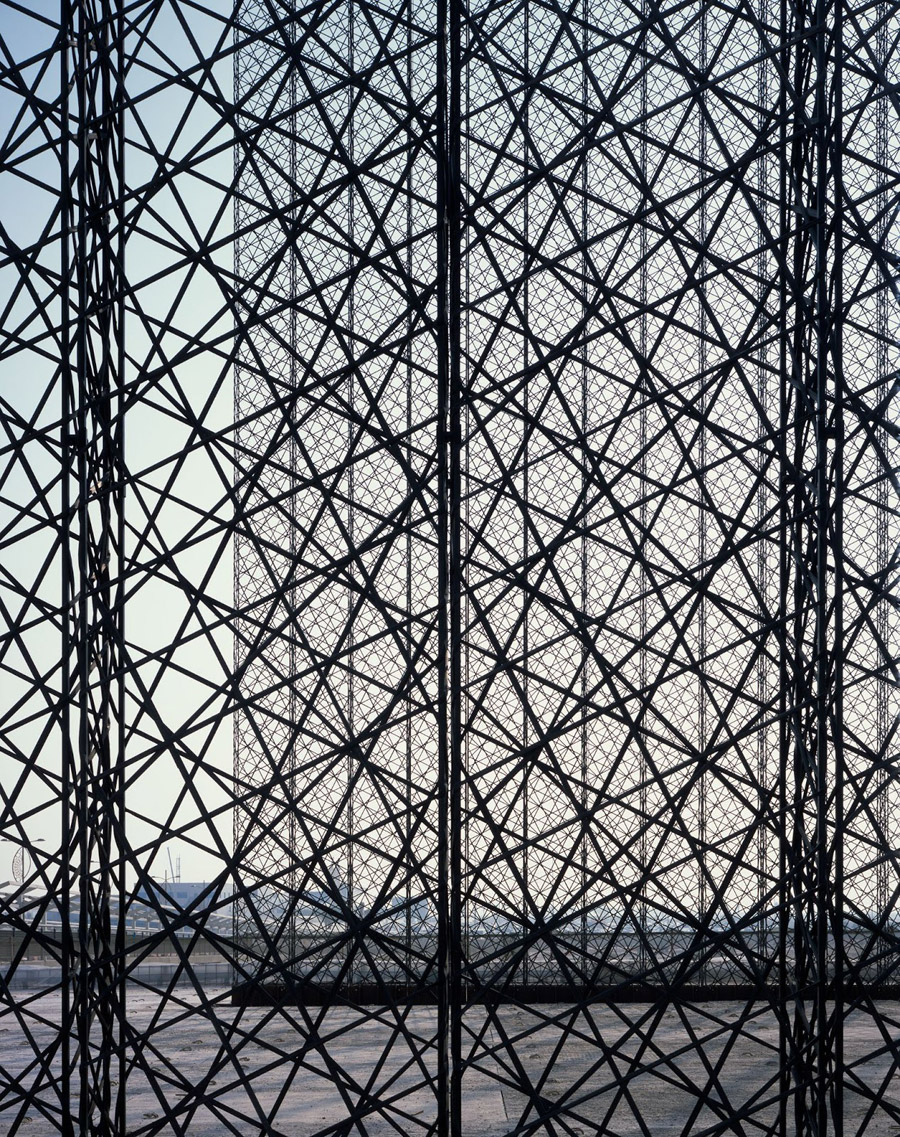 A close-up of one of the portals, made by robots winding carbon fiber threads (enough to reach from here to the sun) into delicate latticework panels reminiscent of aspects of Arabic architecture. Photo © Hélène Binet

Sustainability, designed by Grimshaw, boasts 4,912 photovoltaic panels on its roof and on dozens of surrounding “solar trees," elegant carbon fiber contraptions, 60 feet across, that track the sun. The panels are intended to produce as much energy as the building uses (though both high temperatures and dust are known to reduce the output of PV panels in desert environments). Aquariums, which use a lot of energy, were nixed, said Andrew Whalley, chairman of Grimshaw, explaining, “We had to balance what we can produce and what we use.” Tom Hennes, founder and principal of Thinc Design, says he and the Expo Authority agreed that “too many facts and figures turn people off, so the exhibitions have a more emotional context. They take you on a journey into your values, not wagging a finger at you, but presenting a hyper-real vision of the world and asking questions about what you want the world to be.”

Country and company pavilions are organized into zones corresponding to the three themes. In another seemingly retro move, each pavilion occupies its own parcel of land, with attempts at densifying or urbanizing the vast site seemingly non-existent. With 192 countries participating, the effect is like a suburban office park on acid. At past Expos, developing countries shared communal pavilions; here, adding to the sprawl, the Emiratis paid for individual buildings for cash-strapped nations, including – incredibly – the U.S. 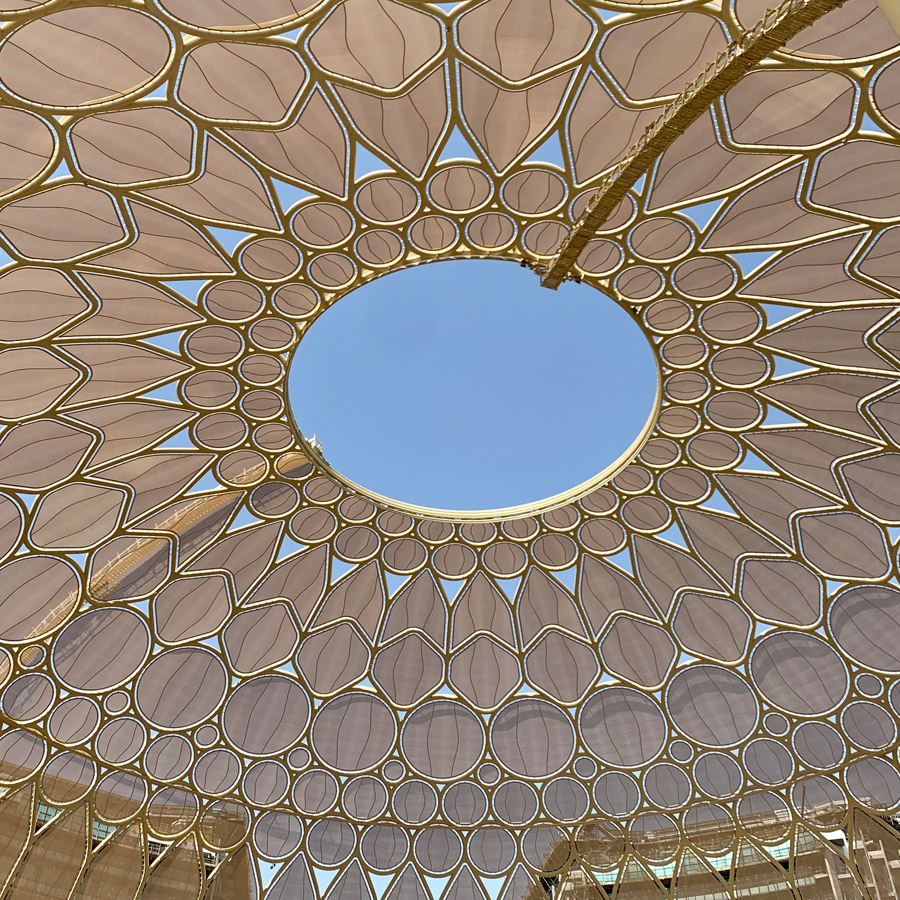 The interior of the vast dome, a self-supporting structure made of steel segments, serves as a projection screen at night.

About the U.S. Pavilion, which is in the opportunity sector: In 2018, the state department chose Colorado’s Fentress Architects to design it; a year later, Fentress dropped out, without explanation. Eventually, the State Department gave the job to Australia-based Woods Bagot, which has offices across the U.S., and worked with California-based exhibition designers Thinkwell Group to address the theme of Life, Liberty and the Pursuit of the Future. According to Middle East Eye, the pavilion will feature a journey to Mars and an idealized future city with minimal car traffic. It was all paid for by the Emiratis, because Congress wouldn’t appropriate the funds. Rumors of what the Emiratis got in return are rampant.

The most talked about buildings include the UAE pavilion by Spanish-Swiss architect Santiago Calatrava, a 150,000-square-foot impression of a falcon in flight, and its aesthetic opposite, an Austrian pavilion made of 38 huge, truncated cones, acting as chimneys (and thus reducing the need for air conditioning) by the Viennese firm quercraft. The U.K., which made a splash at the 2010 Expo with Thomas Heatherwick’s seed vault, could strike gold again with a pavilion by production designer Es Devlin. A cone-shaped building made of giant wooden slats, it is entered through a labyrinth called the Maze of Aspiration (Expo people really talk the way). Words texted by visitors will be turned into poems by a computer and projected onto the building’s exterior.

The organizers of the Dubai Expo originally projected attendance of 25 million over six months. Covid could change all that, with projections varying from one day to the next. But visitors will be dazzled by some 200 buildings, of which a few are bound to be unexpected triumphs by little-known firms that may even inspire children to become architects.