This website requires certain cookies to work and uses other cookies to help you have the best experience. By visiting this website, certain cookies have already been set, which you may delete and block. By closing this message or continuing to use our site, you agree to the use of cookies. Visit our updated privacy and cookie policy to learn more.
Home » Jones Beach Energy & Nature Center by nARCHITECTS
ProjectsBuildings by TypeCivic ArchitectureLandscape ArchitecturePark & Public Space Design

One of the first things visitors see inside the new Energy & Nature Center at Jones Beach State Park, an hour east of New York, is a model of the 330-foot-long building, including the solar panels and geothermal wells that, together, are meant to make it operationally “net zero.” Wall text behind the model describes a number of energy-saving features.

Disappointingly, there is no text about the energy used to create the building in the first place—its so-called “embodied energy.” But an exhibition in one of the center’s galleries, about the carbon footprint of a typical house, addresses that important subject. It may be the first time most visitors have heard of embodied energy, and it’s something the center’s director and chief curator, Jeanne Haffner, pushed for. 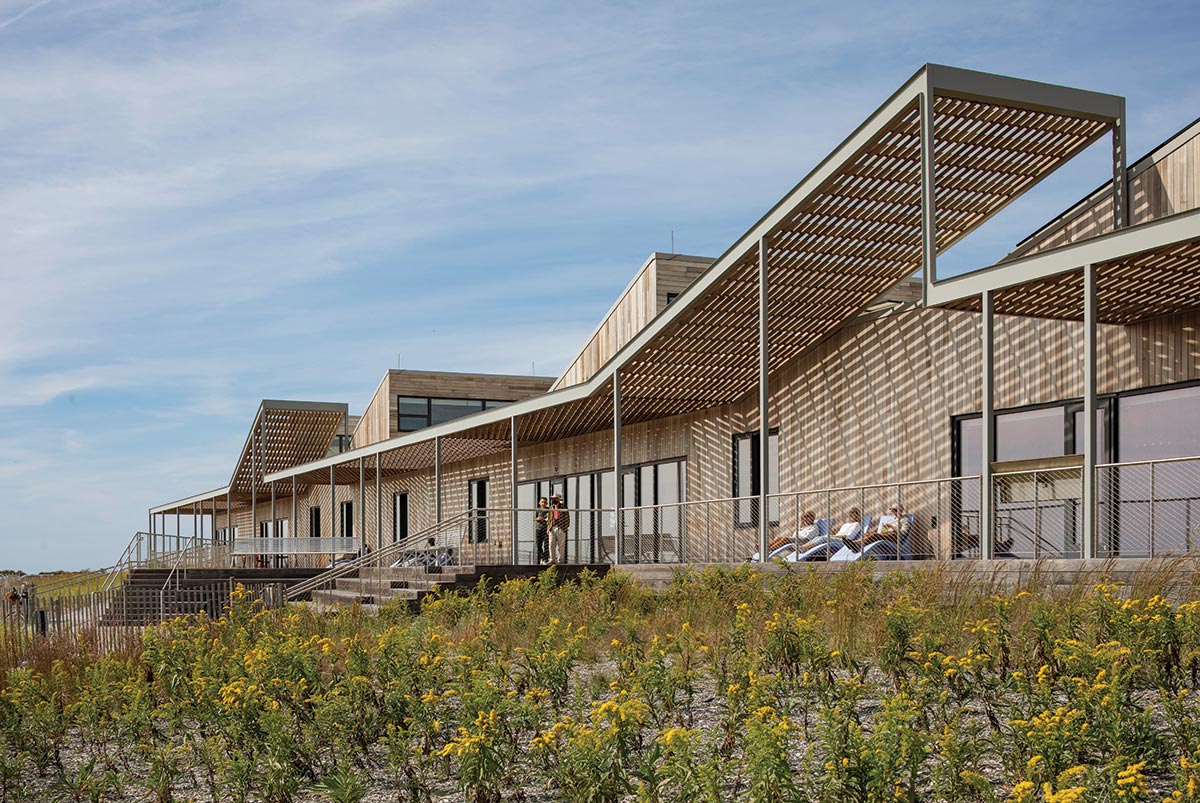 The 12,000-square-foot building, by Brooklyn’s nARCHITECTS, is meant to teach area residents—including children on school field trips—about energy conservation (under the heading “The Nature of Energy”) and coastal ecosystems (“The Power of Nature”). But not all the lessons are in videos and models. It’s important that the building teach by example, Haffner says. Or, as nARCHITECTS partner Eric Bunge puts it, “The building is part of the exhibition.” It certainly looks green, treading lightly on its site, like a 1960s Andrew Geller or Horace Gifford beach house writ large. Clad in quarter-sawn western red cedar (chosen by the architects with help from a sustainable-wood expert in Finland), it is lifted 7 feet above the sand on timber piles, many left over from a 1960s bathhouse that was demolished for the current project. (Raising the building should protect it from storm surges.) Despite ceilings as high as 20 feet, its extreme length makes it seem modest in height. Its wood frame (with “steel columns hidden here and there to resist wind loads,” Bunge says) culminates in glulam beams and a roof of 2½-inch structural wood decking. Poking above the roof are four wedge-shaped monitors that bring northeastern light to the interior (giving it a gentle glow even on cloudy days) while supporting the southwest-facing solar panels. Seen from the access road, the sawtooth monitors suggest ocean waves—a subtle way of announcing the building’s theme. The most distinctive feature after the monitors is the deck that surrounds the center, surfaced in modified wood (considered sustainable because it’s long lasting and made from fast-growing timber). The deck is partially shaded by a wood-and-galvanized-steel trellis. 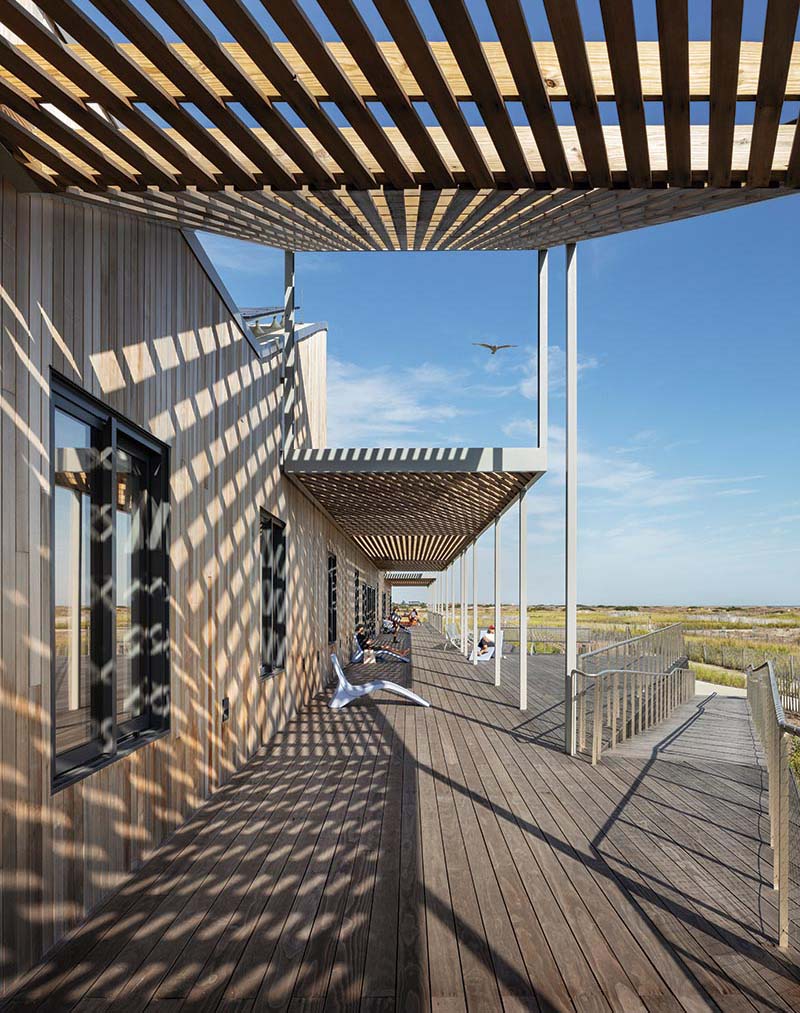 The organization of the interiors is as straightforward as their material palette: the nature exhibitions occupy a large gallery on one side of the entry; the energy exhibitions, two galleries on the other. Circulation is via wide corridors along the southwest side of the building, where large operable windows facing the beach provide both daylight and ventilation. The corridors feature wall-mounted exhibitions, including one on the history of Jones Beach, a Depression-era Robert Moses–driven marvel. (He conceived it, along with a series of parkways, as a way for millions of middle-class New Yorkers to enjoy the same access to nature as Long Island’s robber barons.) The panels are illuminated by the sun, but too much sunlight means the exhibitions’ TV screens are hard to view. 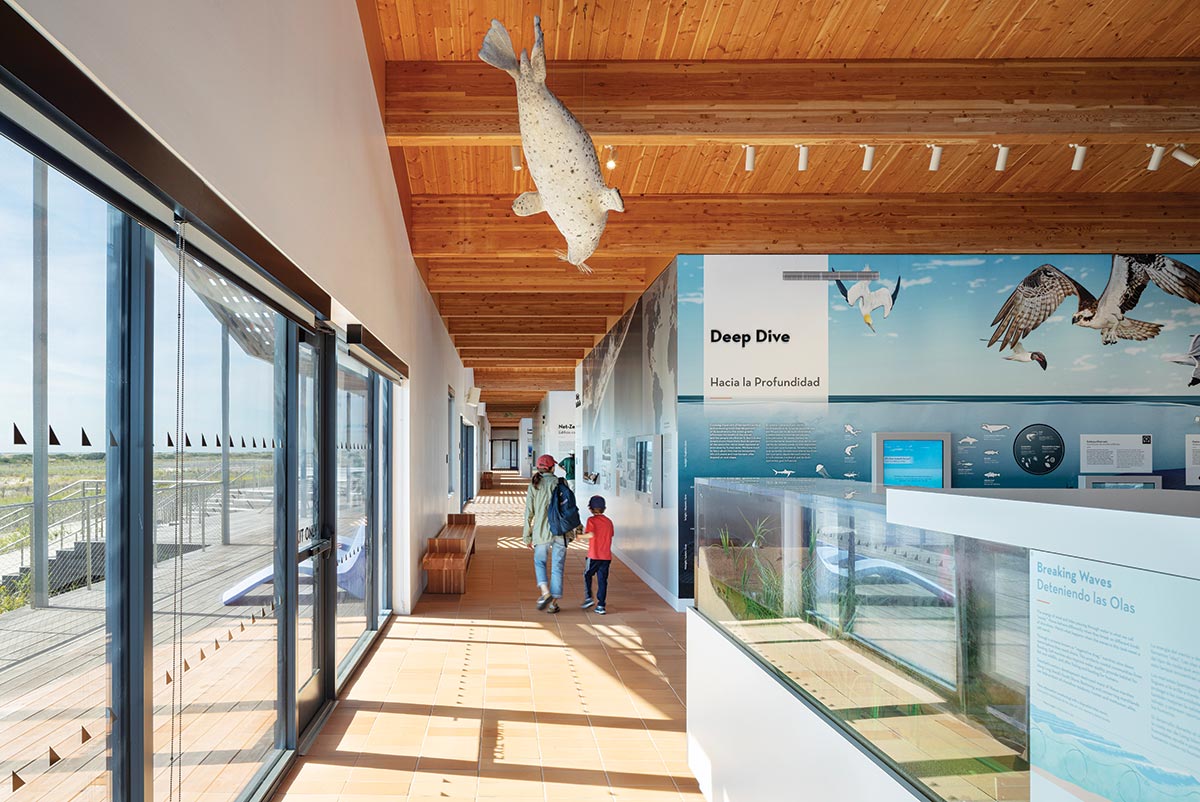 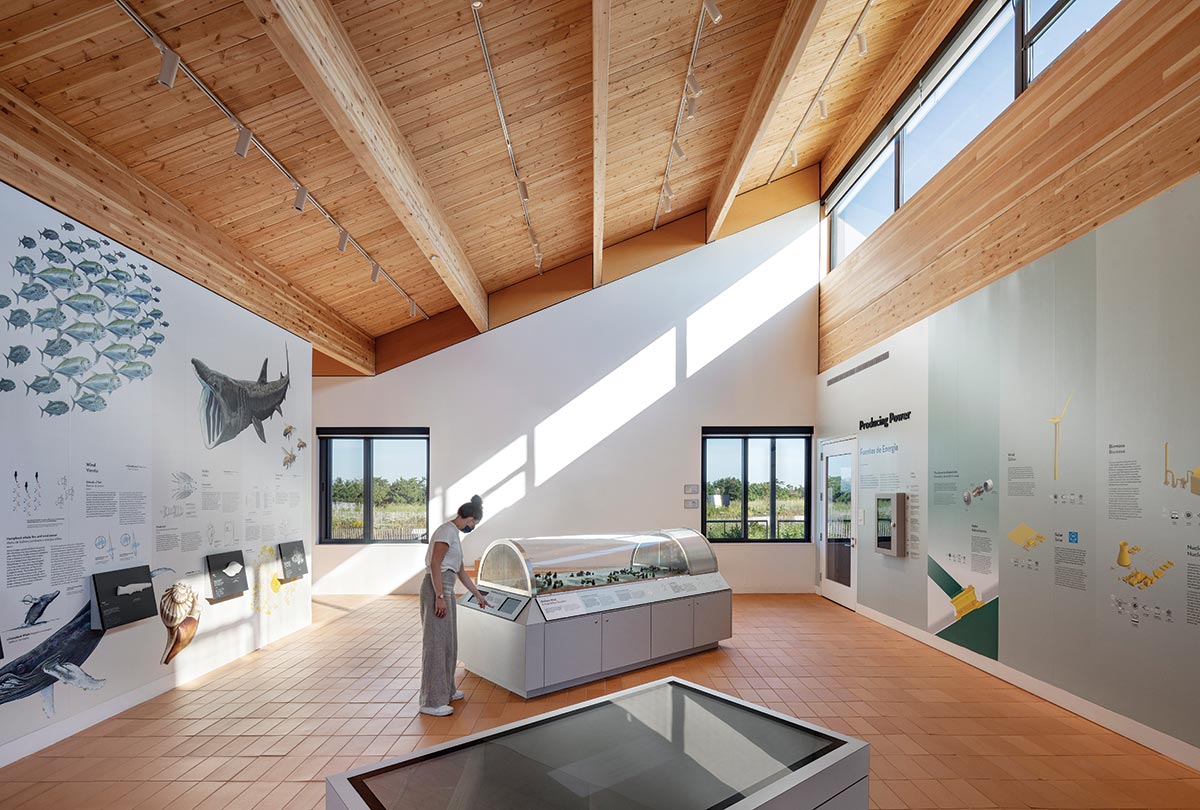 The project came to nARCHITECTS partners Bunge and Mimi Hoang when they were finishing up their New York State Equal Rights Heritage Center in Auburn. The client for that building, a division of the New York State Parks system, asked them to have a look at a nature center at Jones Beach, where a modest renovation was in the planning stages. Not long after, nARCHITECTS was hired as a consultant to the engineering firm leading the renovation. Meanwhile, Parks decided to build an energy-education center at Jones Beach, and after combining the two projects it chose a new site, about 3/4 of a mile west of the existing nature center. The old bathhouse there was ready to be demolished. “But we wanted the building to be surrounded by nature, not by asphalt,” says Hoang. So she and Bunge persuaded Parks to tear out about a third of a giant parking lot surrounding the old bathhouse, resulting in 12 acres planted with American beach grass, seaside goldenrod, and native milkweed. The torn-up asphalt was used to create topography for an outdoor exhibition area. As Bunge points out, “The ambition of the project grew along the way”—the final budget (including the landscape and exhibitions) was about $30 million. Of that, $12 million was contributed by the Long Island Power Authority (LIPA), which is also making annual contributions and has input into the energy galleries’ content. Haffner was hired in July 2019 and rushed to get exhibitions designed and built in just nine months, while the building was under construction. (The only change she asked for was wider doors, to make it easier to move exhibitions in and out.)

Because of Covid, it’s too early to say how many people will visit the facility and how much impact it will have on those who do. But what better place for this experiment than Jones Beach, where millions of people have experienced the power of nature but perhaps never delved into the subjects of power and nature before.

WWI Centennial Commission Selects "The Weight of Sacrifice" for Memorial in Washington, D.C.