Minneapolis became infamous in 2020 when officer Derek Chauvin asphyxiated George Floyd on a city street, a murder that triggered global protests against police brutality. Some of the first happened in downtown Minneapolis’s Government Plaza, next to the city’s now completed new Public Service Building (PSB), designed by the New York office of the Danish practice Henning Larsen, in collaboration with the Minneapolis firm MSR Design. The city and its design team conceived of PSB prior to the protests—and the pandemic. But the building seems perfectly timed for this moment in Minneapolis’s history, as the city resets its relationship with the community, with a facility that transforms how local government staff interact with residents and businesses. 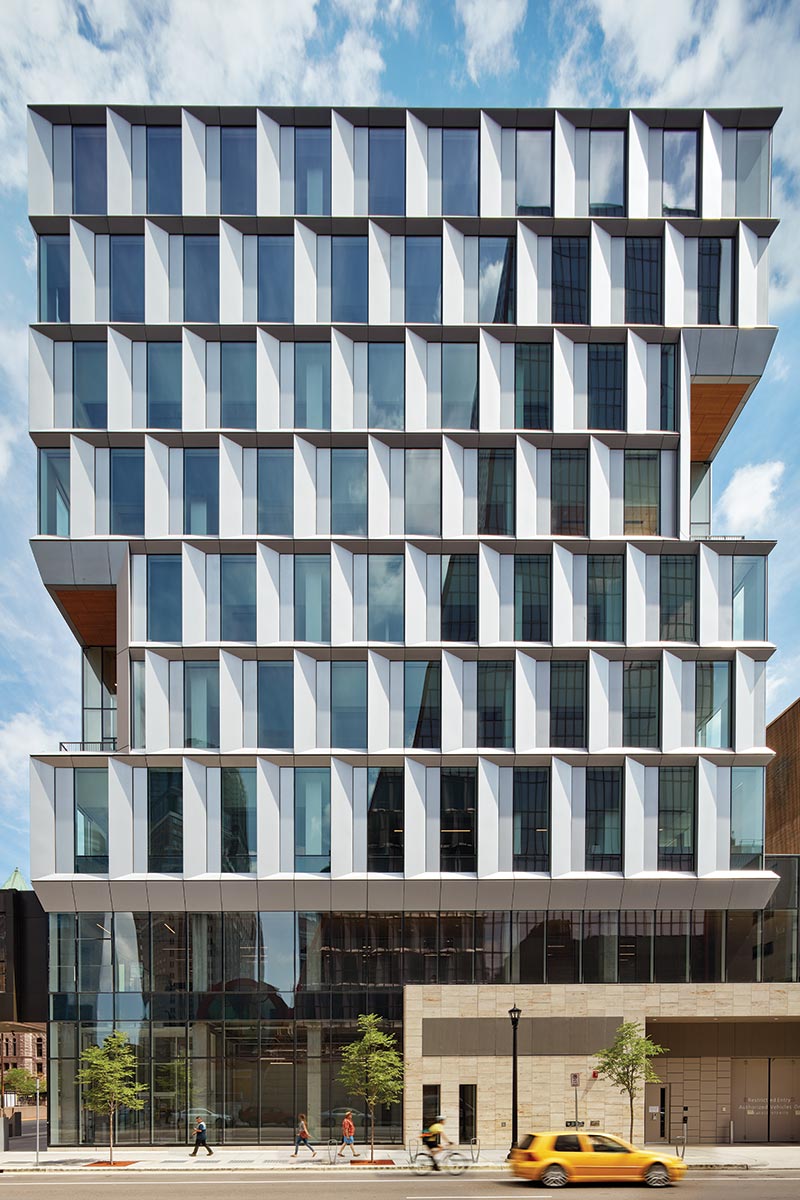 Aluminum fins and glass are an antidote to the surrounding opaque architecture. Photo © Corey Gaffer, click to enlarge.

PSB arose out a desire to consolidate seven municipal departments and collocate 1,100 employees, scattered across the downtown, in one structure. The narrow 10-story, block-long building occupies the entire east side of the Plaza, on the site of a former multistory parking garage. Flanked by Minneapolis’s massive Richardson Romanesque City Hall on one side of the Plaza and Hennepin County’s high-rise office building on the other, the glass-and-aluminum-clad PSB stands as a shimmering statement of hope and healing in a city whose mood has been as dour as the granite-clad facades of its older government buildings.

Minneapolis also saw PSB as a chance to implement a new model for connecting with the citizenry. “The city wanted to make its services more accessible to the public,” says Henning Larsen design director Michael Sørensen, “with a building that was open and transparent and yet also secure.” To achieve that goal, the design team conceived the lower two floors of the building with a glass-walled, openly accessible interior space that “visually pulls the plaza into the building,” says Søren­sen. A wood-lined conference center, along with public restrooms and retail space, occupy the street level, while an expansive, light-filled public-service area at the skyway level connects to the city’s 9½-mile footbridge system. A wide stair like an amphitheater links the two levels, with a café and seating area at the top. 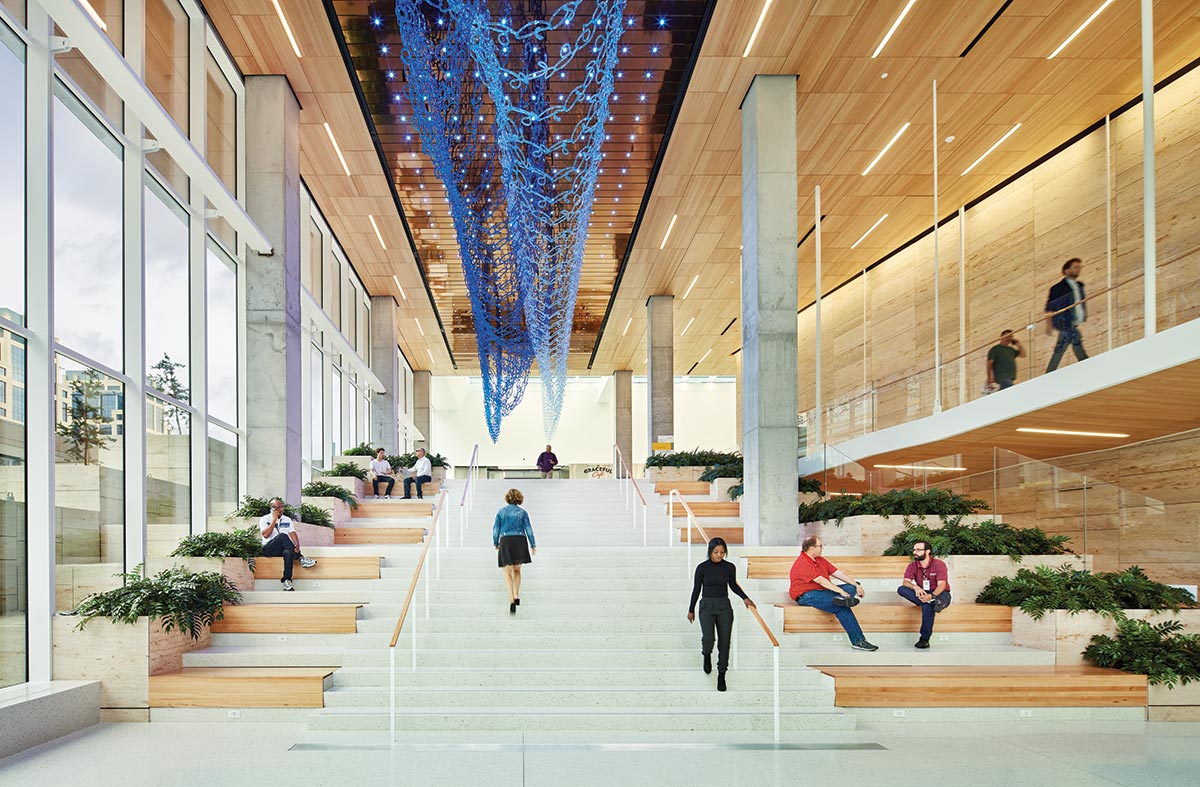 With the new delivery model, citizens arrive at a bright-yellow service desk along the skyway, from which they proceed to various counters or conference rooms where city staff can meet with them. An enormous skylight, running the entire length of the block, in the space that separates the office building from an adjacent parking garage, brings daylight into the service area and more than compensates for its lack of windows. People who already have relationships or ongoing projects with staff can proceed up the elevators to one of the seven office floors, where they can meet with staff in additional small conference rooms, separate from the office areas.

The design team located the staff commons and a variety of meeting rooms, exercise facilities, and shared spaces on the top floor, with access to a roof terrace and green roof. Such amenities “help the city compete for talent,” observes Sørensen. The solar array atop the 11th-floor mechanical room, along with well-insulated exterior walls and highly efficient mechanical and electrical systems, contribute to the building’s LEED Gold performance. The city also commissioned 15 artworks from diverse artists that occupy key public spaces, including unique pieces that hang from the ceiling of each elevator lobby and a large sculpture suspended from the main lobby ceiling. An architect and artist even designed the frit patterns for the building’s glazing, based on avian migrations, to create bird-safe glass. 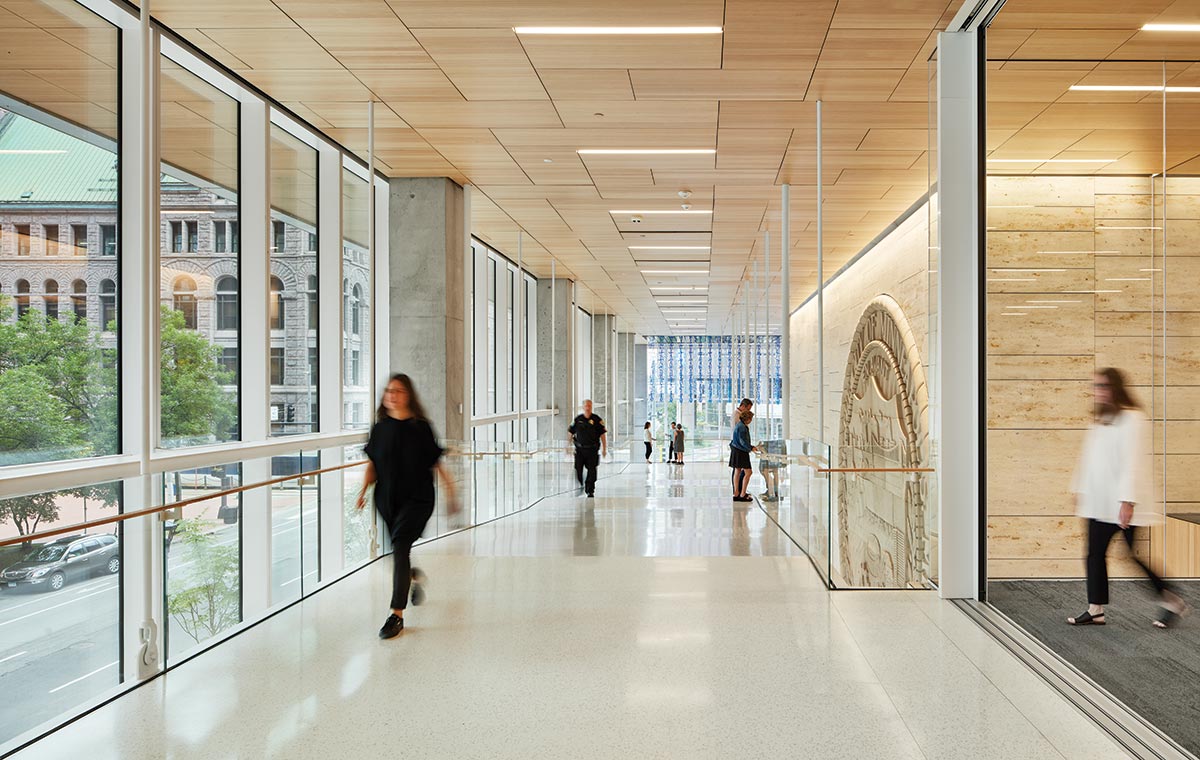 One way to think about the building’s design comes from the large limestone seal of the city, hanging on the lobby wall and containing the city’s motto, En Avant (French for “forward”). You can see that sense of forward movement in the building’s facades. Composed of repeating prefabricated window units, with angled aluminum fins that partly shade the glass, the building’s elevations capture reflections from adjacent buildings and appear to move with the sun as the day progresses. At night, the building changes to become lantern-like, with the aluminum fins intensifying the light coming through the full-height windows. “We always design with light in mind,” says Sørensen, and it shows. The staggering of the window units from one floor to the next also gives PSB a sense of motion, as the angled fins march around the building. 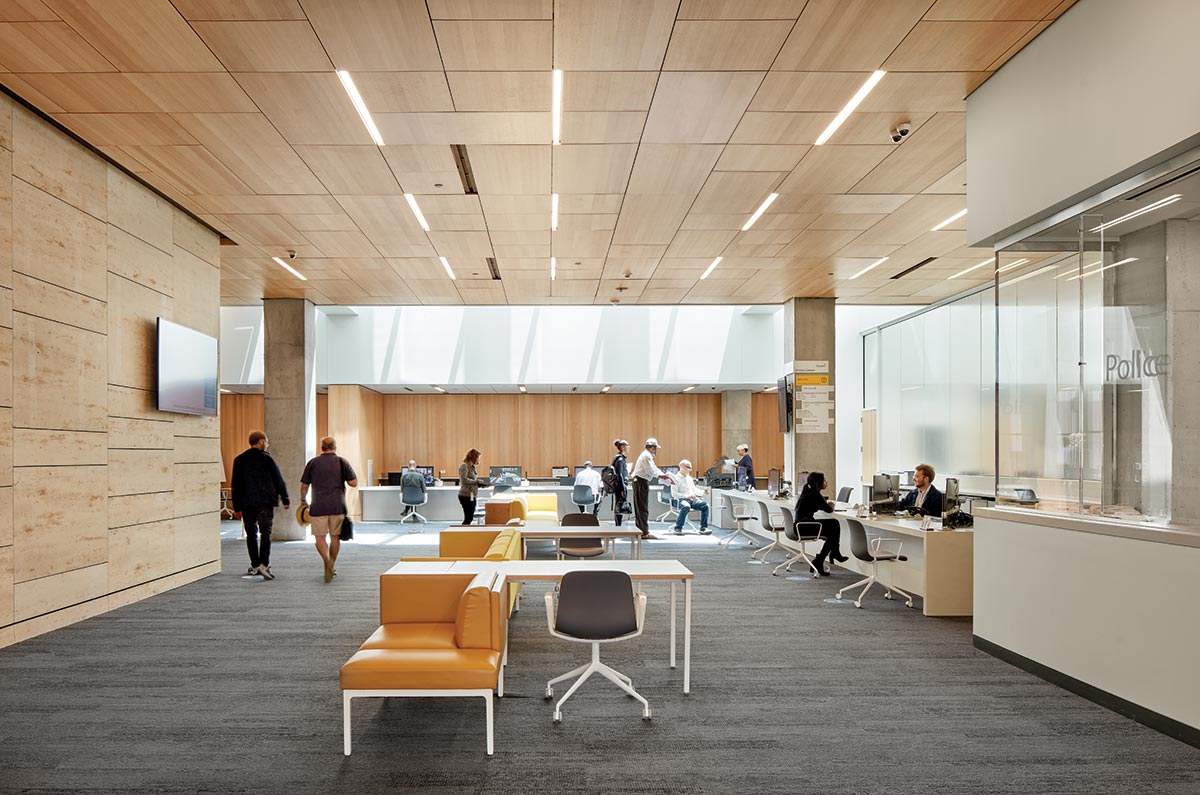 The building offers various opportunities to meet casually (2) and for the public to interface directly with city representatives (1). Photo © Corey Gaffer 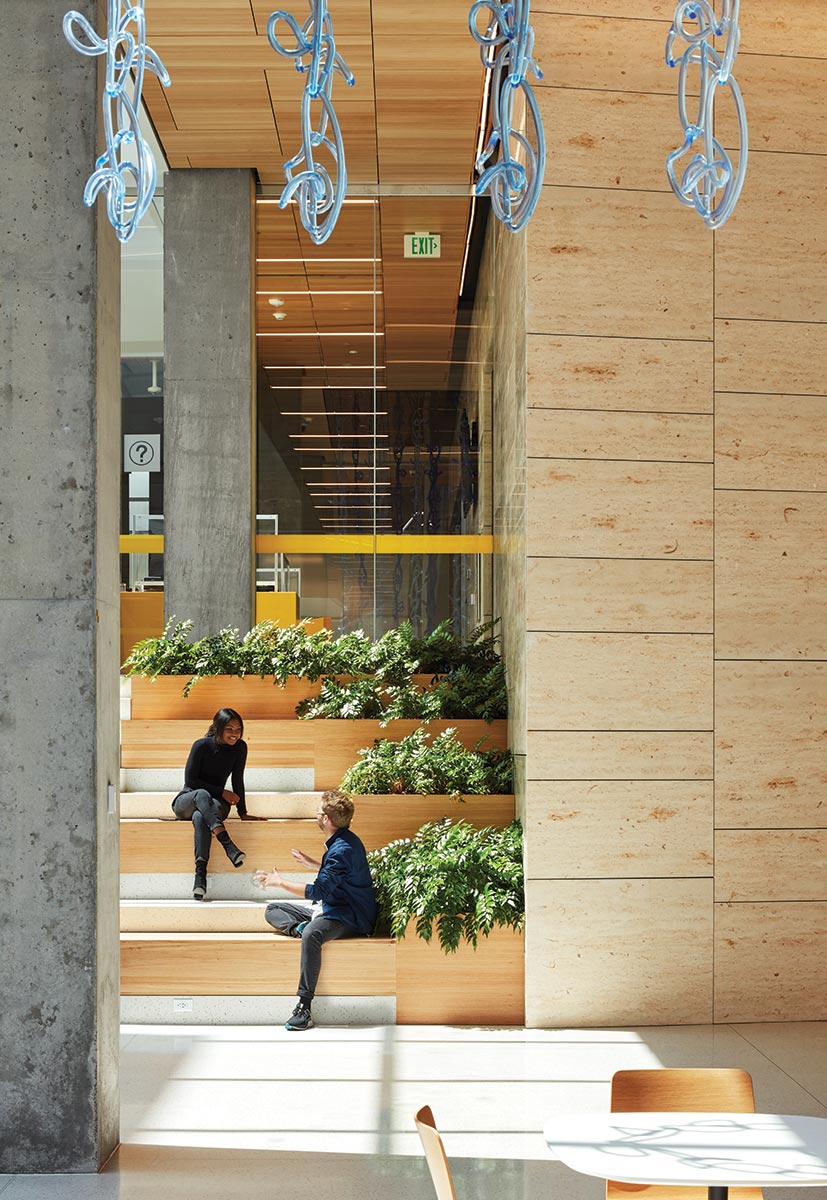 At the same time, PSB conveys the forward movement of the city staff working within. The designers have accomplished that with glass-enclosed two-story collaboration spaces that spiral up the structure’s facades. Sørensen calls them “the eyes of the building” because they give the staff expansive views of the city they serve and allow the departments on different floors to collaborate as they move the city forward, while also providing unexpected views into the building. Citizens can see city employees working together, conferring on balconies, and moving between floors on switchback stairs. The hardwood floors and ceilings of those double-height spaces also visually warm the interior and add to the sense of heat that comes from collaboration. 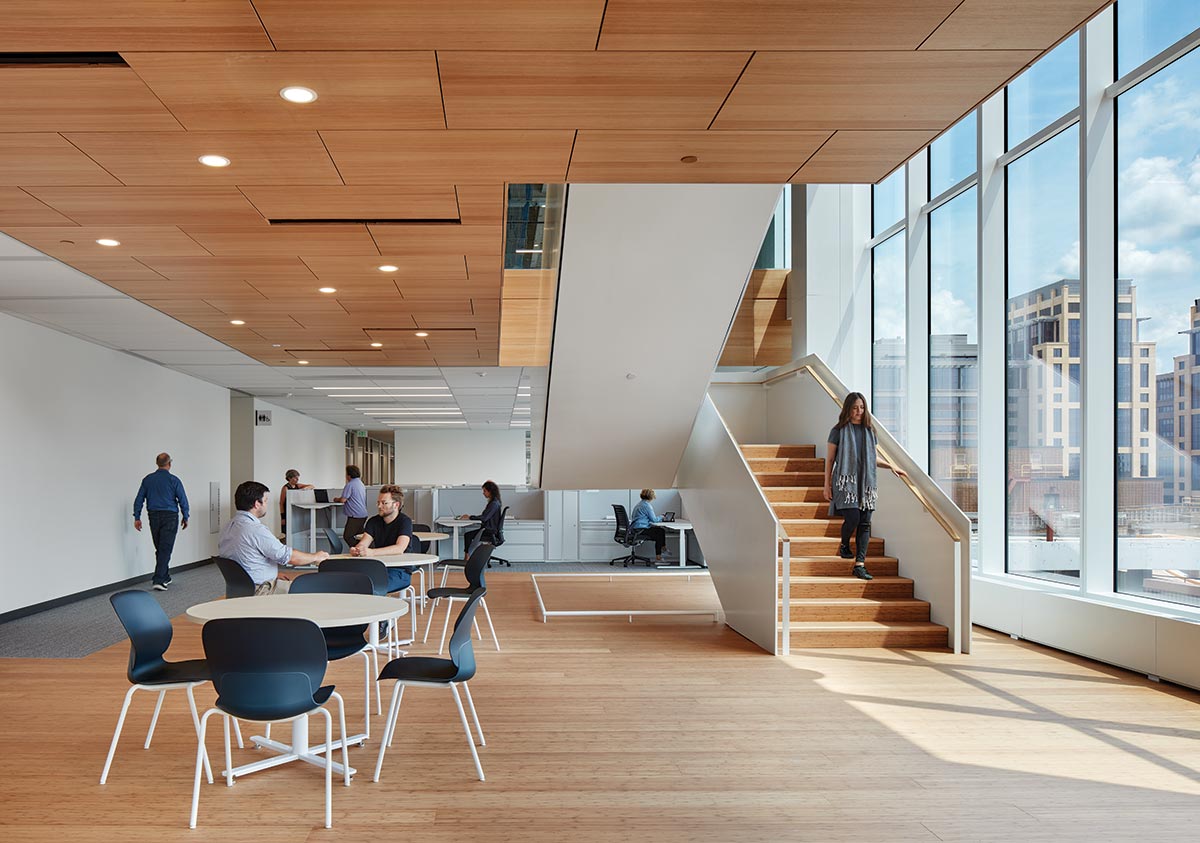 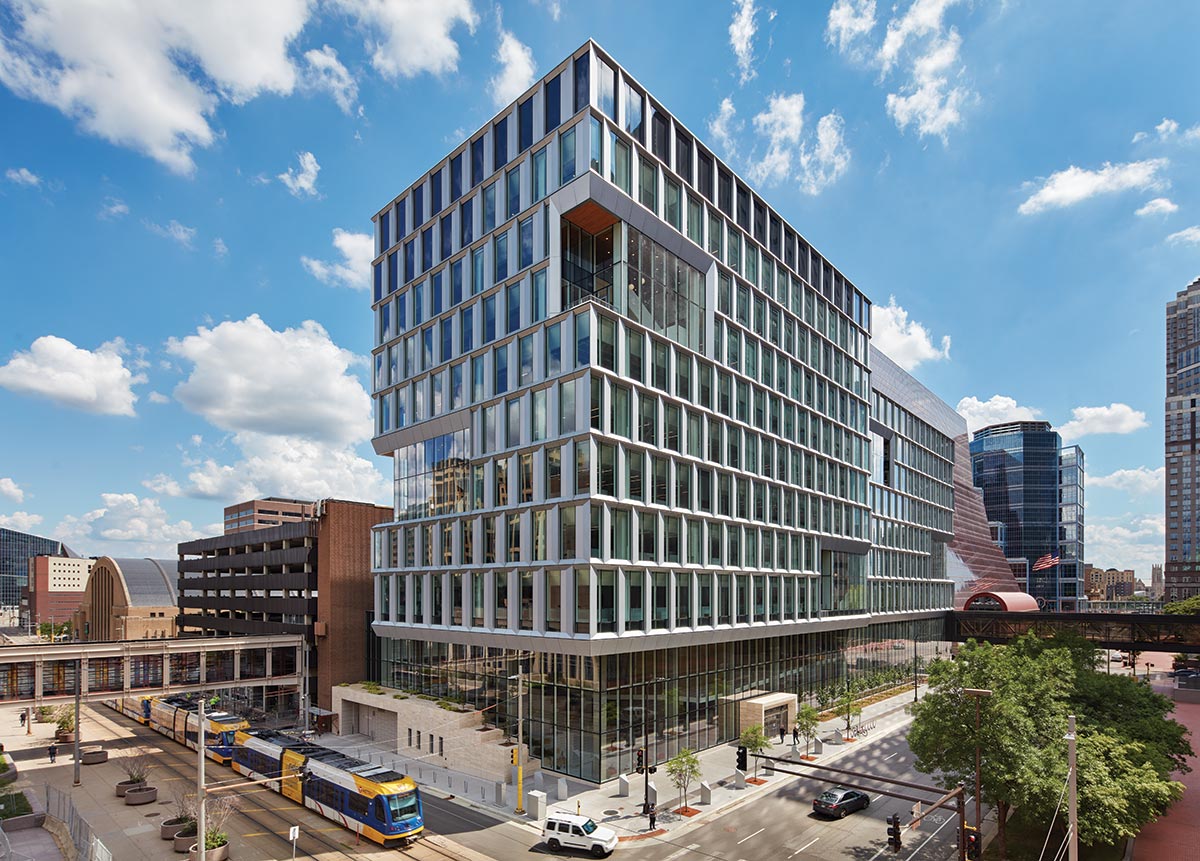 Those vertical connections up the building have a functional benefit too. They not only link city departments, but also enable departments to grow onto other floors while allowing the staff to stay connected through the internal stairs. That will serve the city well in an era of hybrid work. No one knows what the post-pandemic office will be like, but the vertical and horizontal flexibility of PSB’s office floors give it an advantage. “The building can change with people’s mindsets,” says Matt Kruntorad of MSR Design. As the city’s seal says: en avant! 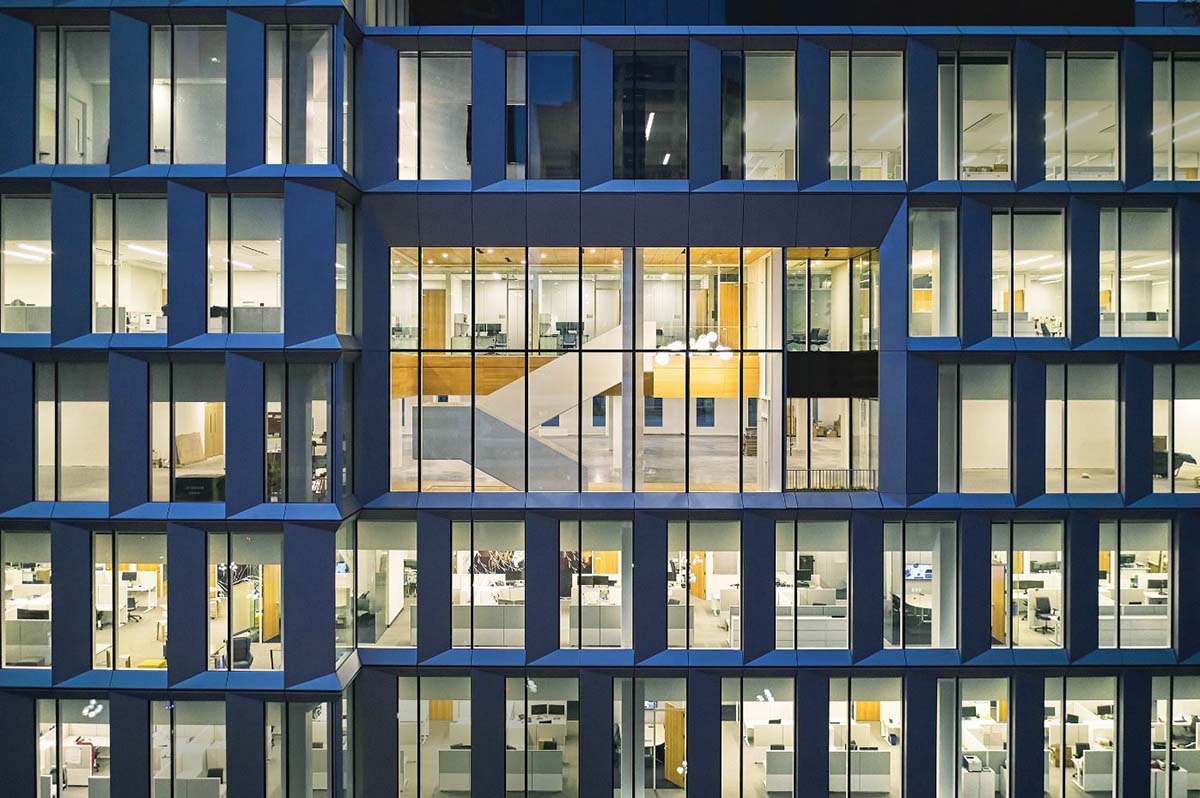 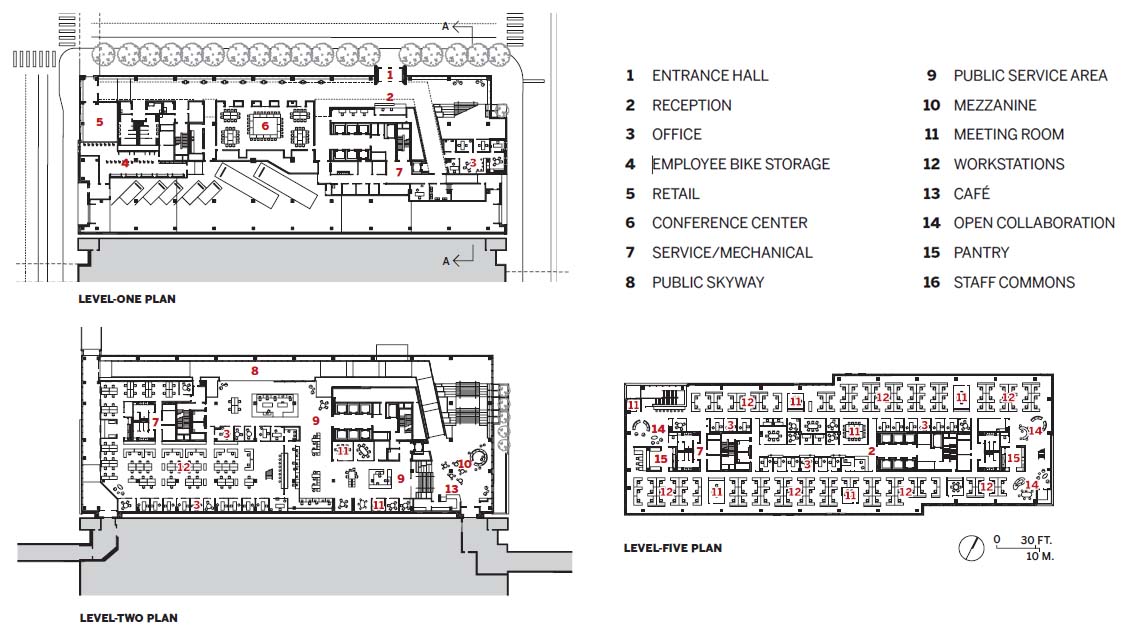 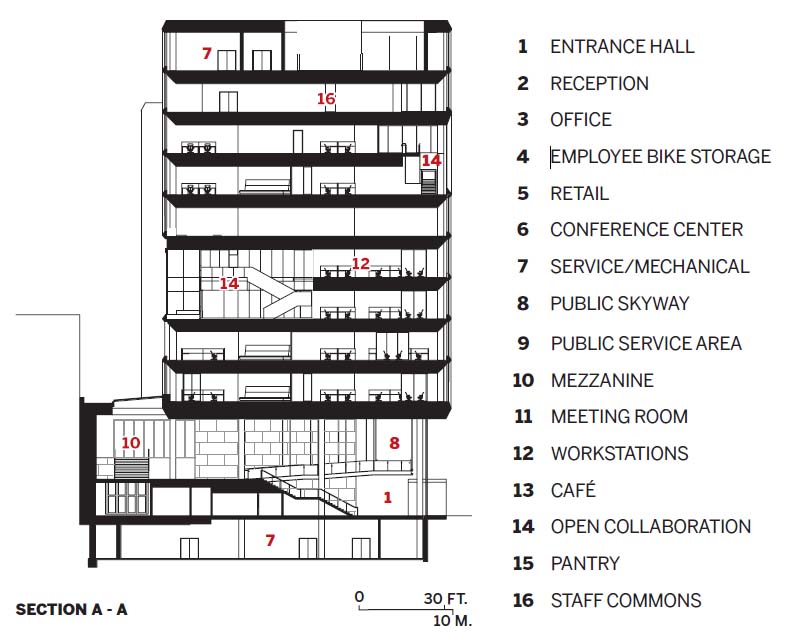