Working with nature is a common thread in the diverse portfolio of Blee Halligan, a relatively young architecture practice based in London and the Turks & Caicos Islands. “That’s our passion,” says cofounder Greg Blee, “and we’ve been lucky to forge our path building in wild places—on beaches, cliffs, and mountains.” Some ingenuity was required to conjure a natural setting for its latest house, however. The 4,380-square-foot villa is on a rather ordinary suburban street in Duffield, a village near the geographic heart of England in Derbyshire. Although its half-acre plot has westward views to fields and hills, there are close neighbors on three sides. But with skillful planning, they seem to recede from sight, leaving occupants to enjoy a sense of seclusion among lush gardens.

Blee Halligan’s clients, Craig and Lisa Foster, had originally intended to remodel a modest bungalow on the site, but when the architects established its limited potential, the couple decided to start afresh. They asked for a relaxed family home with “unprecious” interiors to withstand playful children, and a clearly contemporary character. 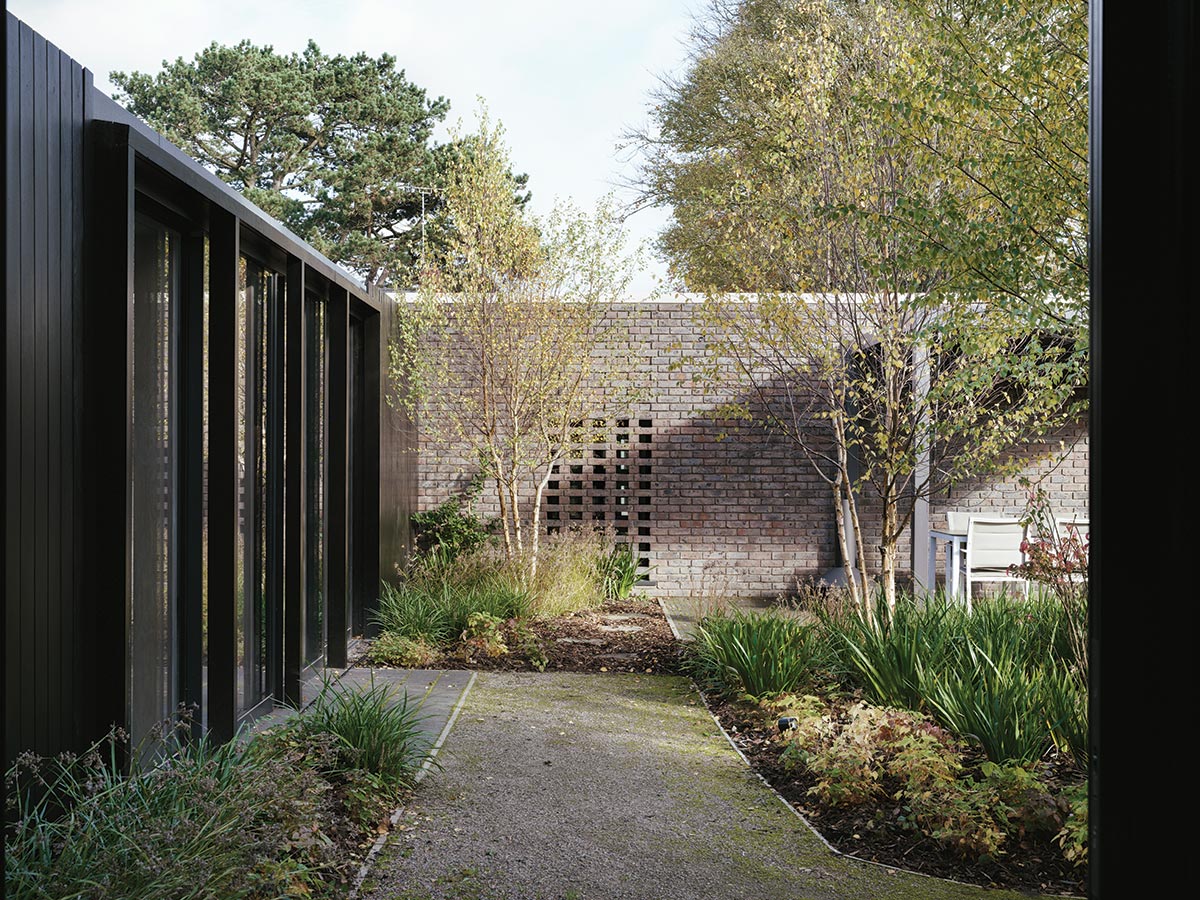 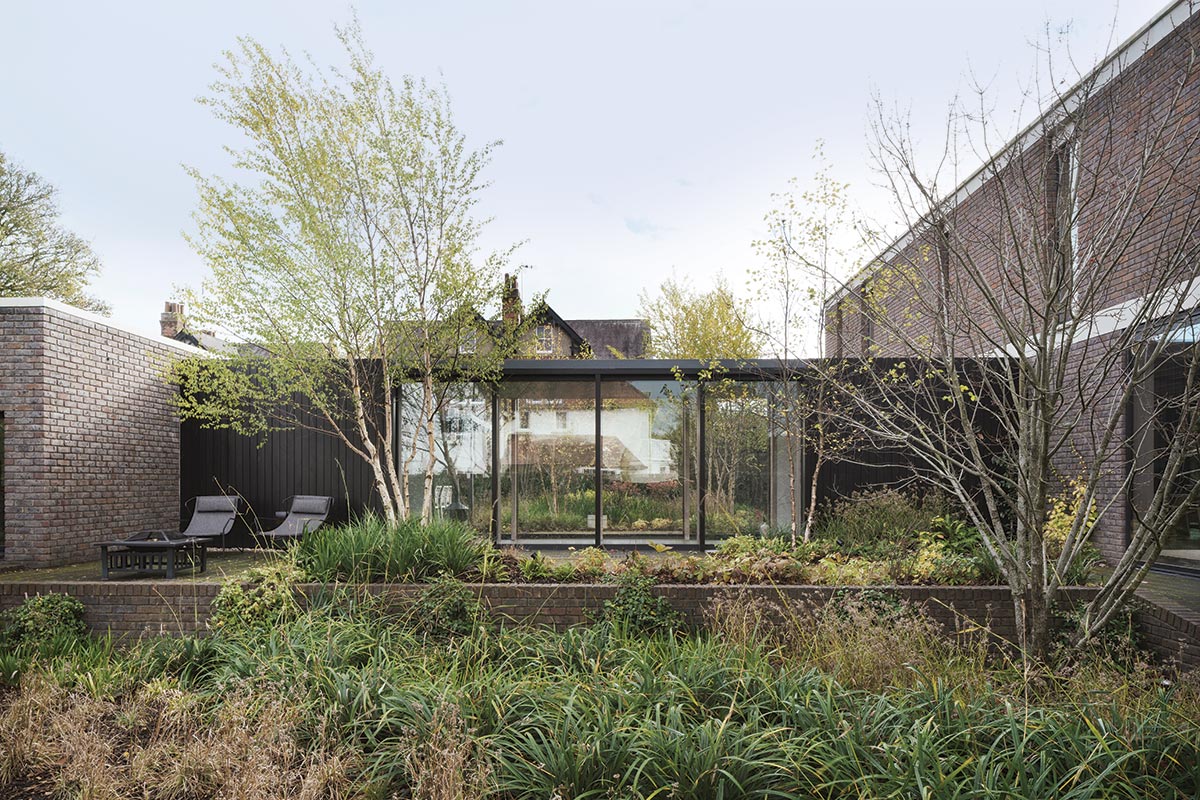 Despite close neighbors on three sides, the house enjoys a sense of seclusion within the landscape, dotted with ponds and silver birches. Photos © Henry Woide, click to enlarge.

To make the most of the primary vista, it made sense to position the new building where the old house stood, on raised ground in the middle of the plot, but the distance between the bungalow and gates to the street had marooned it in a sea of asphalt. The architects came up with a solution that drew on Blee’s earlier experience designing a facility for dementia patients, spread across a Victorian walled garden to frame intimate, protected courtyards. “Stretching a building through a confined site can have a powerful effect,” he says.

The villa’s small entrance court is framed by two linked brick pavilions containing the garage and a guest annex. From there, a glazed passageway runs through the middle of the site to the two-story main house, also expressed as a pair of simple brick volumes. Separated by a narrow glazed slot, they are set at different heights on gently undulating terrain. The elaborate plan defines three interconnected gardens, designed by Johanna Gibbons, a leading landscape architect and Blee’s sister.

Inspired by Duffield’s location in a river valley, she conceived a wet woodland dotted with ponds and silver birches, with meandering paths following beds of native species that flow smoothly around the rectilinear geometry of the house.

That soft setting also contrasts with rough-textured brick facades. Masonry was a natural choice, says Blee, tying the villa to nearby Edwardian houses and to the 18th-century mills for which the valley is famous. Purply-blue bricks clad the first floor, while lighter, redder stocks are used above, in a subtle allusion to the earth and sky. With brickwork and full-height windows framed by bands of precast concrete, there is a hint of early British Brutalism—the 1955 Ham Common flats in London by James Stirling and James Gowan come to mind—although Blee insists that any similarity is the product of instinct rather than intention. 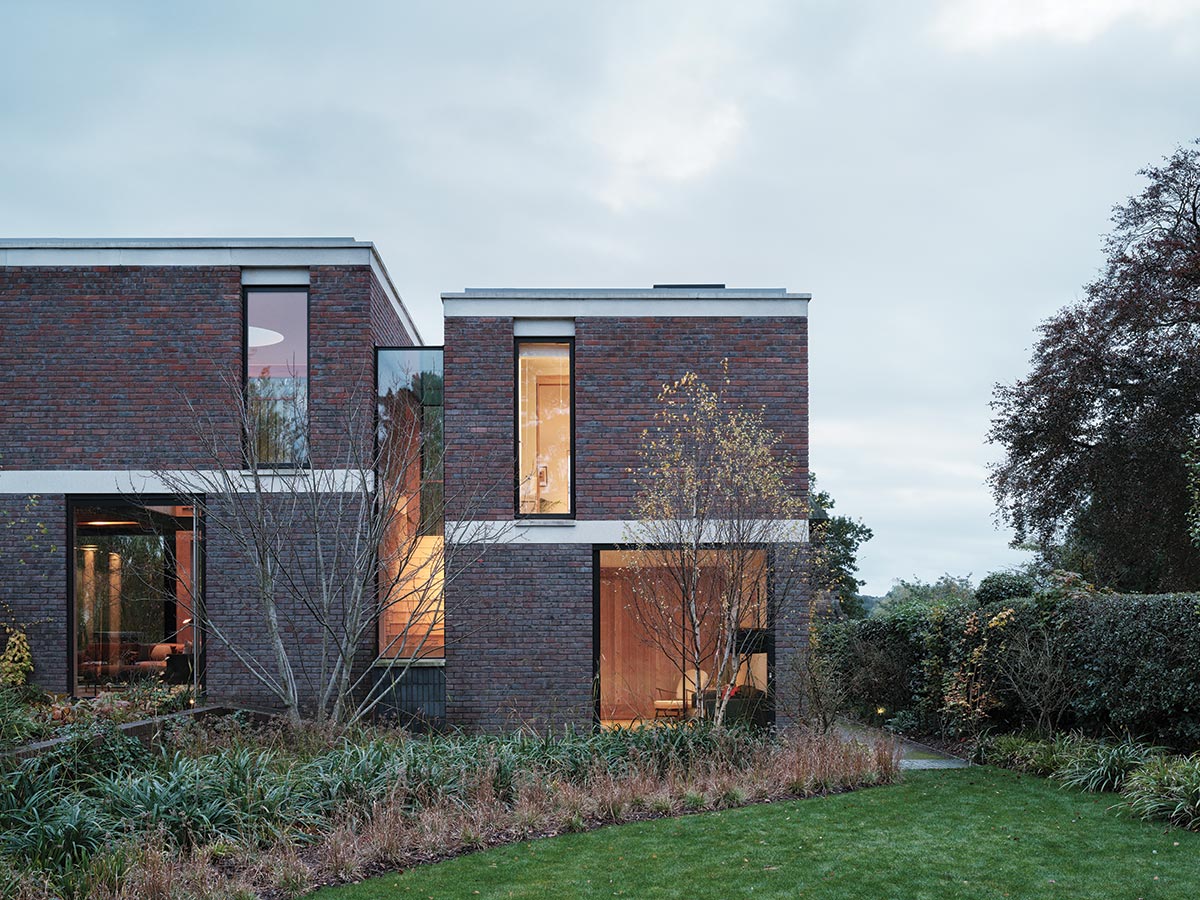 Dark brickwork continues in the compact entrance hall, setting the stage for a theatrical route through a house whose circulation spaces are among its most enjoyable aspects. Turning left into the bright timber-framed passageway, the relationship of architecture to landscape is immediately apparent. On either side, dense planting lines the route, and straight ahead a weeping willow fills the view from a window in the open-plan living area.

There, references to the mills reappear in a palette of industrial materials. Structural concrete blocks and black steel are left exposed, but are warmed by Douglas fir beams and linings to doorways and windows. An air of calm composure belies meticulous care in detailing. “We almost lost the plot in setting out bricks and blocks,” says Blee. “It is as refined as possible.” 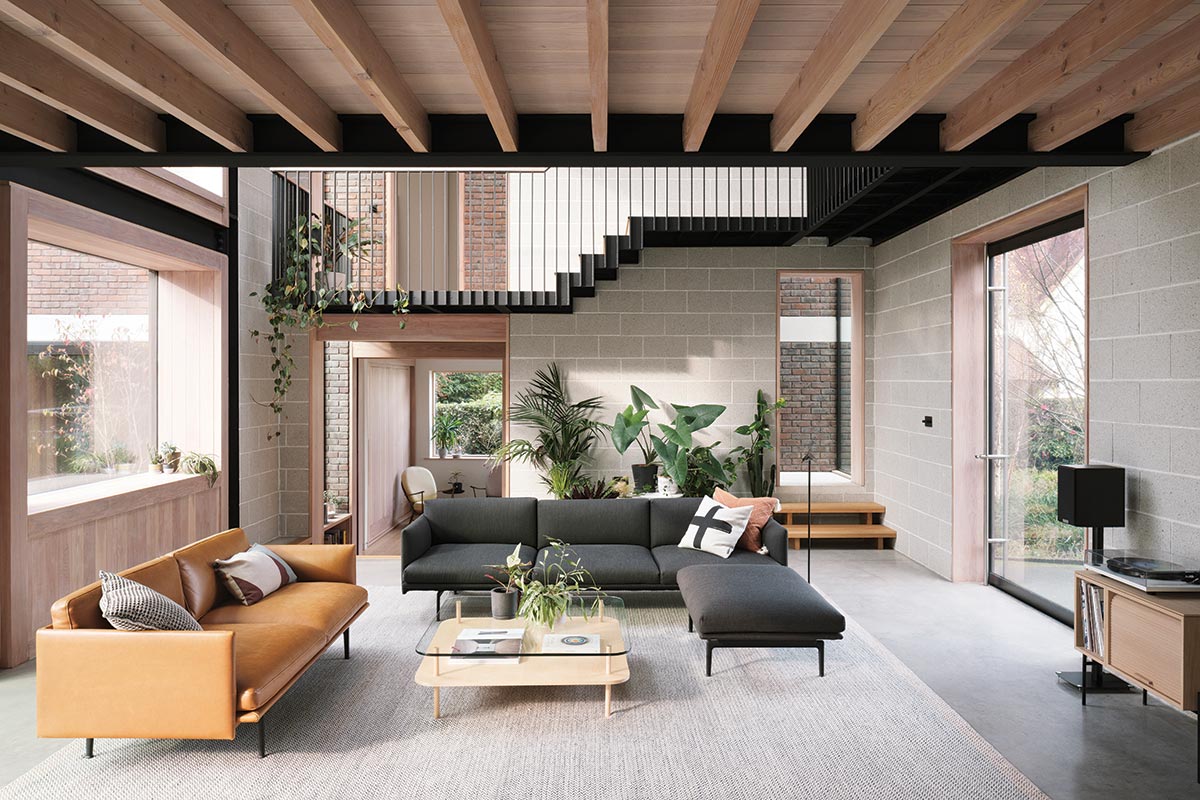 Industrial materials, including concrete block and black steel, are used in the living areas, but are warmed by Douglas fir (1 & 2). Photos © Henry Woide 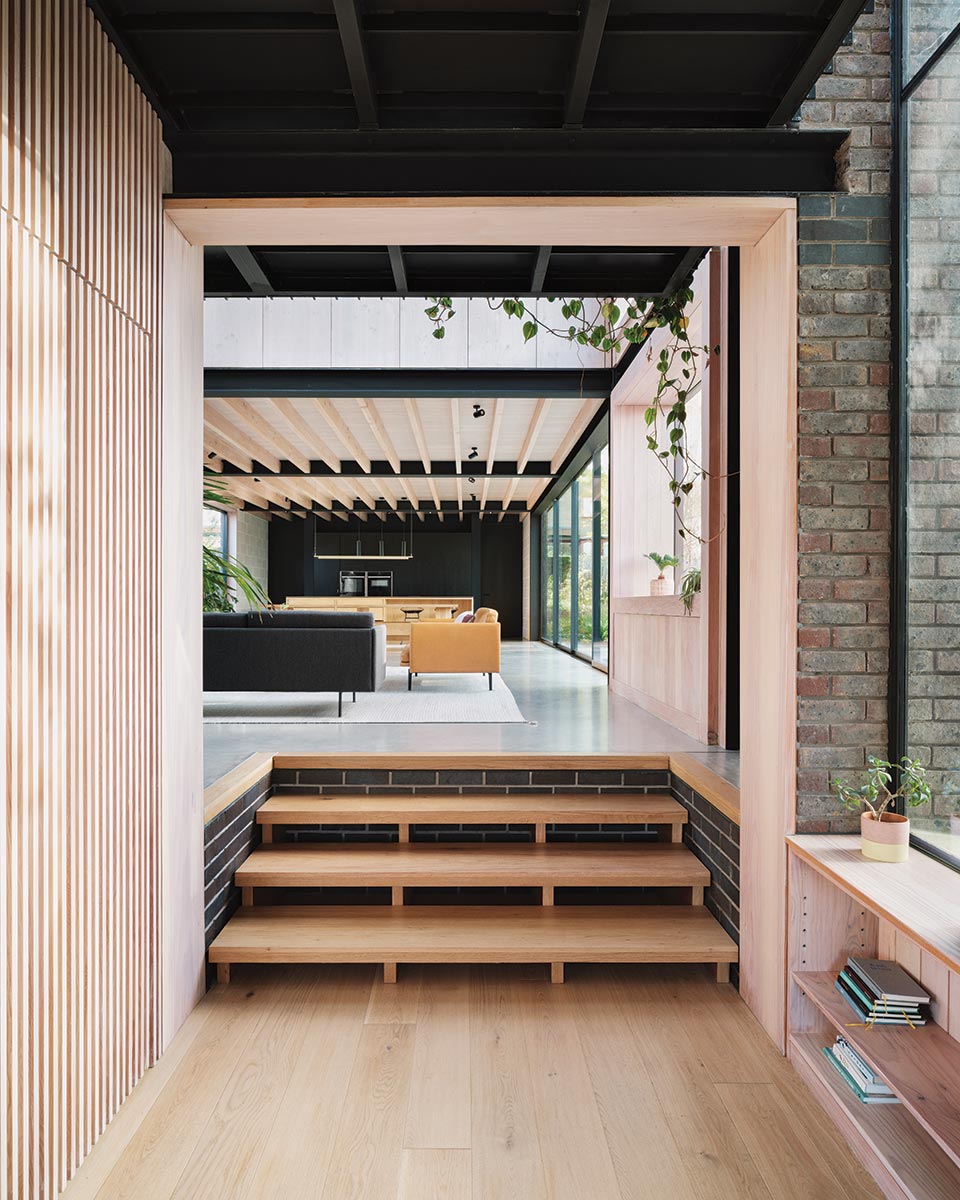 Another dramatic highlight is a staircase inserted in the glazed slot between brick pavilions, which leads to bedrooms via a steel gallery overlooking a double-height section of the living area. Standing there I counted 10 different views out, through high- and low-level windows and a circular skylight. With so many openings, light falls into the house in beautiful and unexpected ways, filtered by trees to cast rippling shadows on the concrete floor.

The tough materials and hard lines might not suggest it, but this is a comfortable place to be. “I did worry that it would look like a prison,” says Craig. “The architects said, ‘trust us,’ and they were right.” If the design process seems to have been unusually trouble-free, however, the house was realized in the most difficult circumstances. Before construction began, Lisa was diagnosed with a terminal illness, and sadly died some months later. “We nearly ditched the project,” Craig recalls, “but I needed something to get excited about. Building the house is also a legacy for her, which has been positive for the family.” 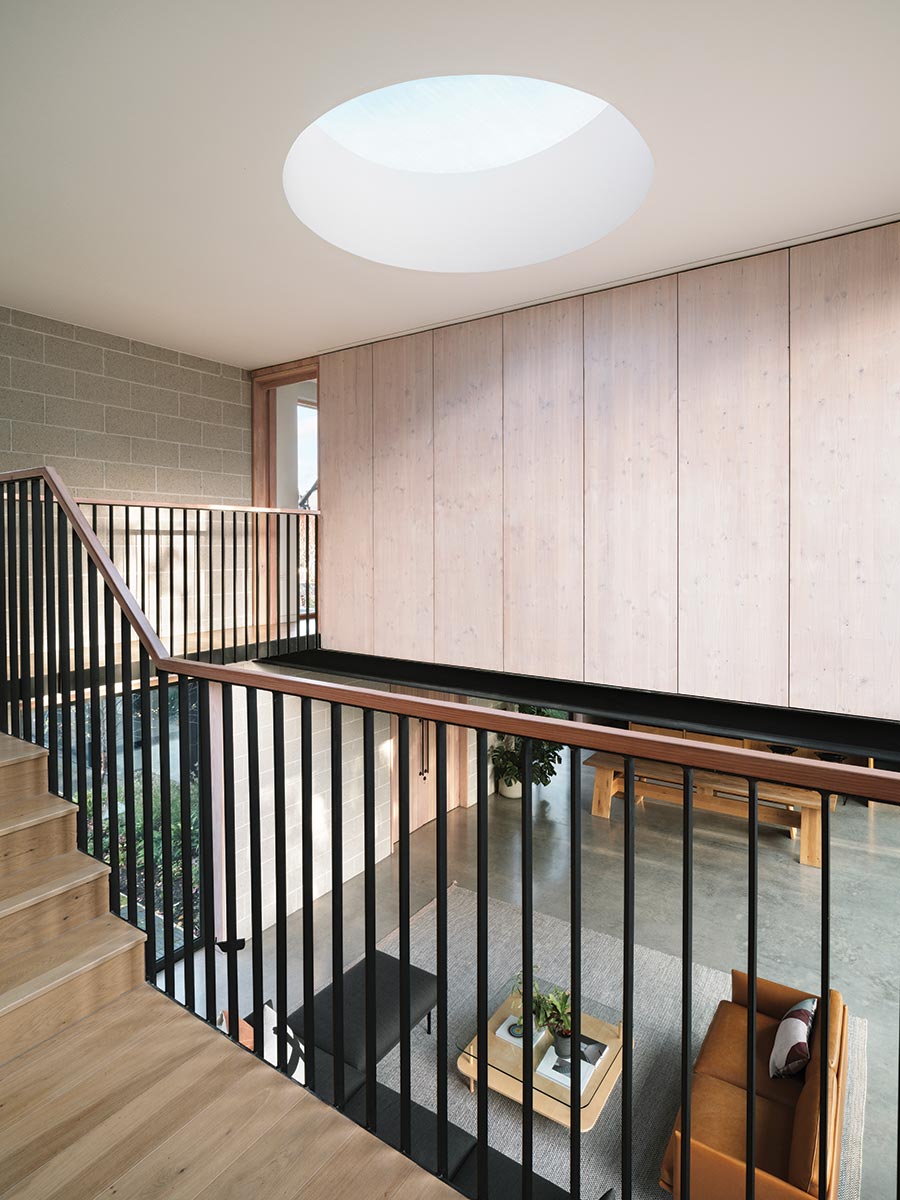 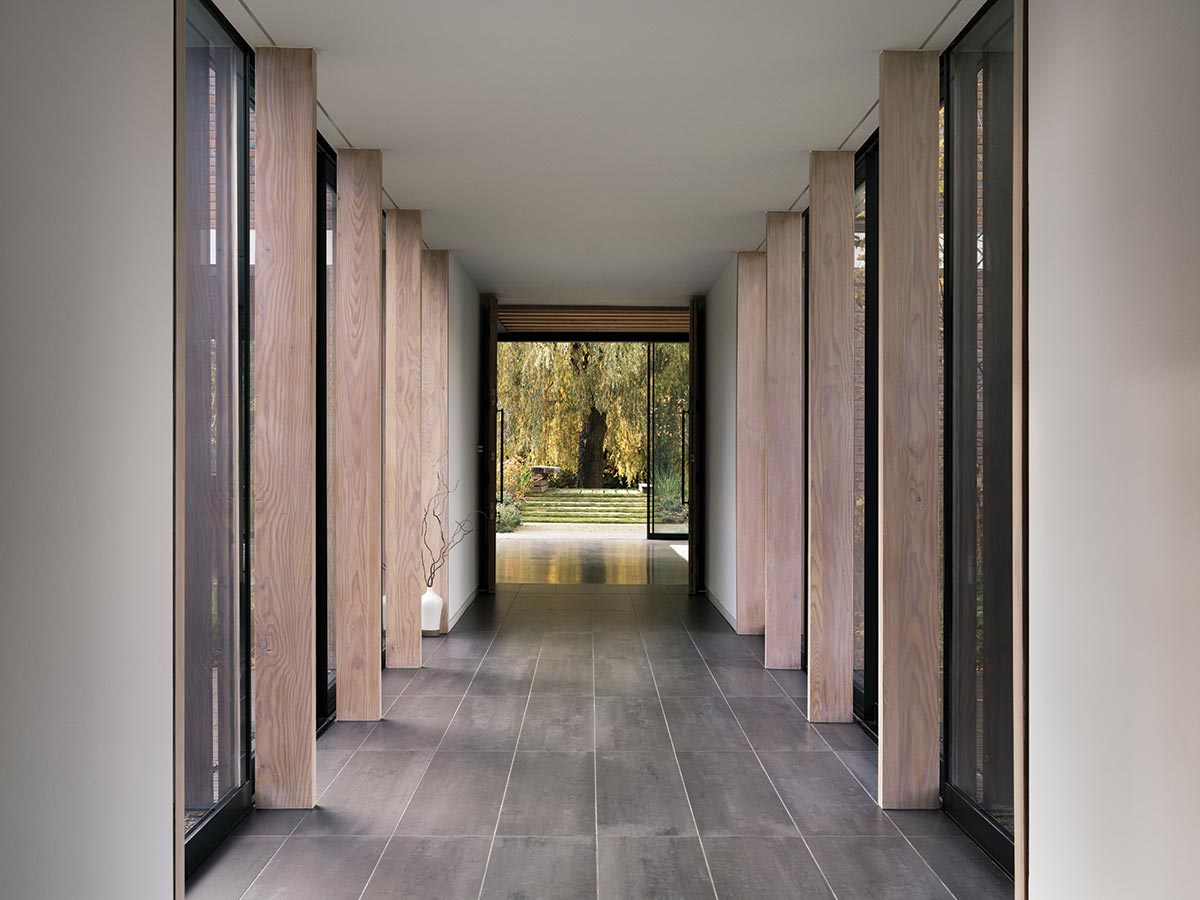 There are views out in every space, through a circular skylight (3), at the end of the timber-framed passageway (4), and across a wall of glass in the kitchen (5). Photos © Henry Woide 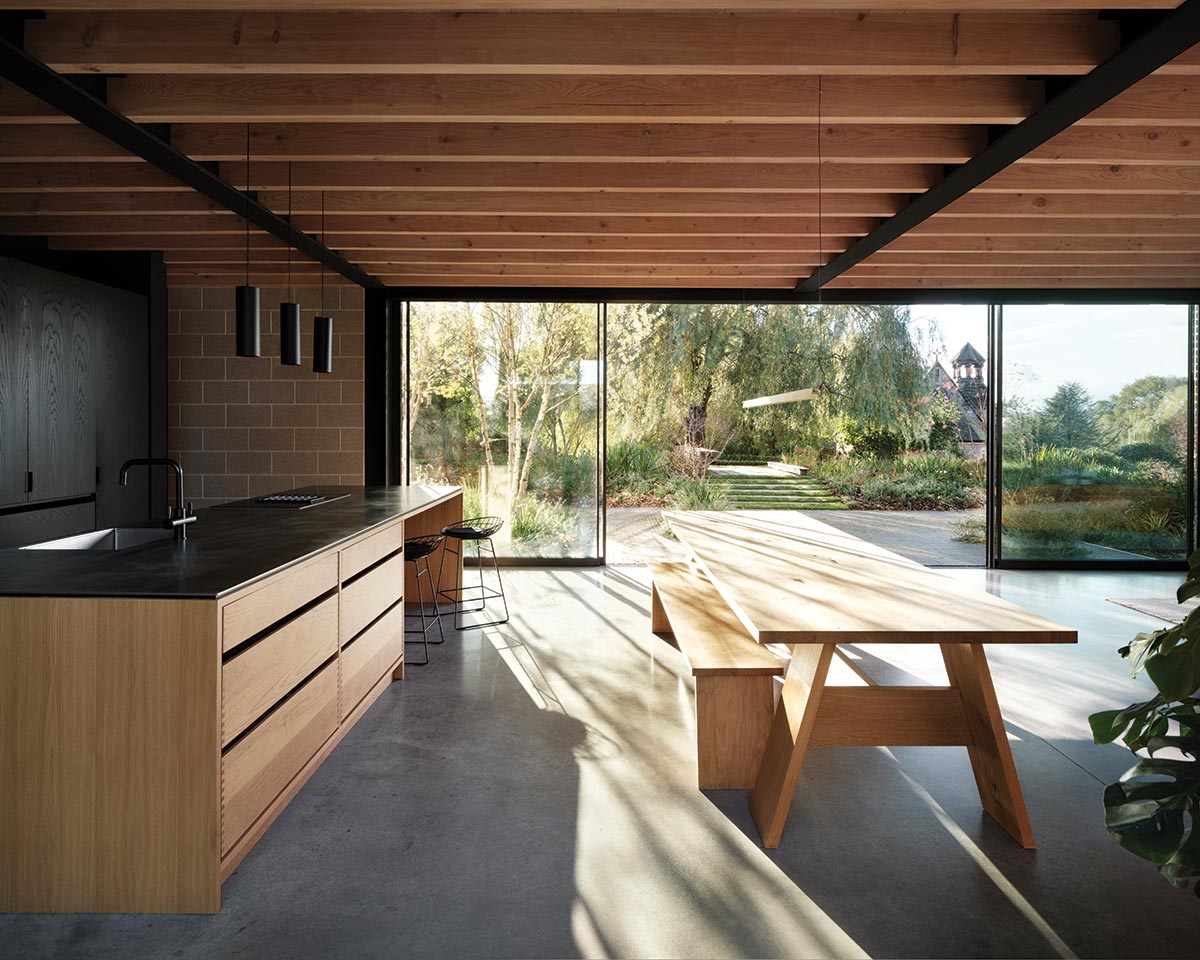 While the children love using the myriad routes through the house and gardens as a racing circuit for scooters, their father is most pleased by the cozy feel of the living room at night, and the close connection to the landscape—“like living outside all year round, whatever the weather.” For me, the standout was Blee Halligan’s handling of tactile, weighty materials to create characterful spaces that are both open and protective. Solid, serene, and often surprising, the house has amply repaid the couple’s initial confidence. “We thought it would be good,” says Craig, “but it’s better than we could have imagined.” 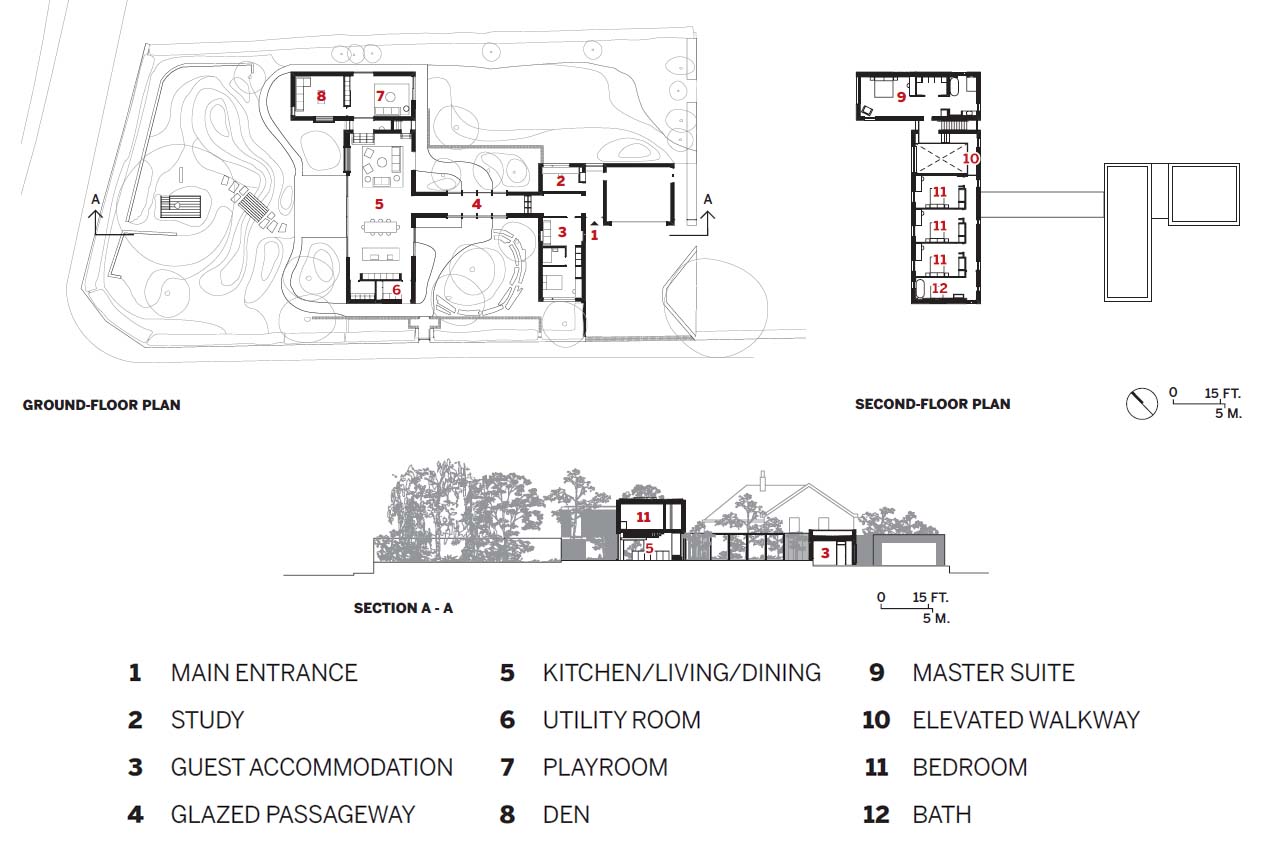