Review: 'The Stahl House: Case Study House #22: The Making of a Modernist Icon,' by Bruce Stahl and Shari Stahl Gronwald with Kim Cross

Julius Shulman’s iconic nighttime photo of Case Study House #22—with its cantilevered glass-walled living room hovering above the city lights of sprawling Los Angeles—is arguably the most famous image of residential architecture. Yet the story behind this remarkable building—how it came into being and the experience of living there—is far less known. And that’s what this book reveals. A deep and detailed account with abundant images, it’s a biography of a house and its owners—and the book’s first half, in particular, is a great read.

Shari Stahl Gronwald and Bruce Stahl, along with their late brother, grew up in Case Study House #22 and still own it. As they write in the foreword, touring visitors often ask about the family behind it. “We knew there was an untold story,” Bruce recently said, “and we set out to tell it.” In the dozen chapters that follow, Kim Cross, an Idaho-based author and journalist, weaves a narrative that portrays the family in intimate detail while placing the house within the cultural, historic, and technological-architectural contexts that made it possible. The project came at a pivotal moment and through the convergence of five key players: Buck and Carlotta Stahl, determined clients with a vision and an extraordinary piece of land; Pierre Koenig, a young architect with a background in experimental prefabricated-steel construction and a willingness to tackle a site widely deemed unbuildable; John Entenza, the inspirational editor/owner of Arts & Architecture magazine, who’d launched the Case Study Houses program in 1945; and Shulman, the photographer who portrayed the house, sparking public imagination. Completed in 1960, the project emerged from the post–World War II era, when materials and innovations previously channeled into the war effort became fodder for cutting-edge design. The Case Study program—addressing a burgeoning middle class and rising housing shortage—aspired to create affordable, easily buildable prototypes for modestly scaled yet inventive Modernist houses. (It’s ironic that many of the 20 surviving Case Study Houses have become privileged commodities.) 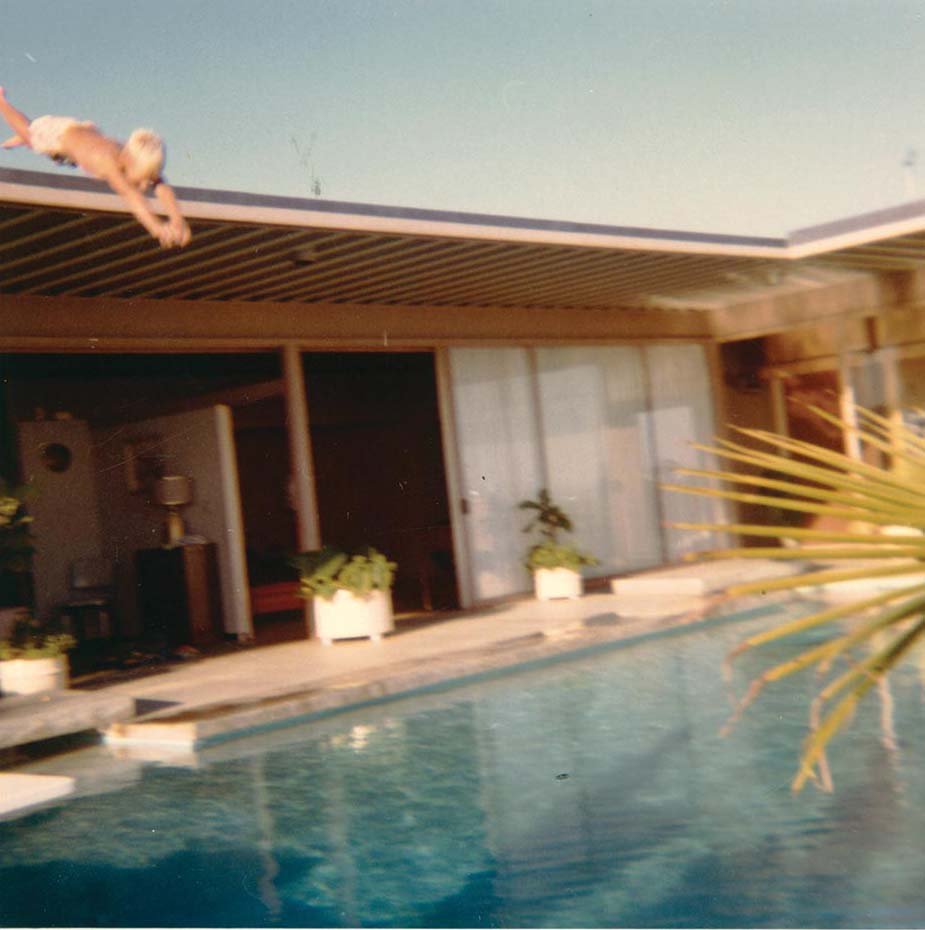 The Stahl kids dove from the roof into the pool. Photo courtesy Chronicle Books

Buck and Carlotta Stahl were indeed a middle-class couple of limited means. A graphic designer turned aerospace purchasing agent and a homemaker, they had, as Koenig later said, “champagne tastes and a beer budget.” Despite their artistic sensibilities, they couldn’t afford, even with discounts, the Mid-century Modern furnishings from Arts & Architecture’s shoot; and, after happily occupying the house for nearly a decade, the family had to move in with relatives to weather a severe economic downturn. But, six years later, they returned, with “the Stahl kids” resuming “ordinary childhoods in an extraordinary house.” No Case Study project was more quintessentially Modernist than the two-bedroom #22, perched on a Hollywood Hills promontory, with steep drop-offs and a 270-degree panorama.

Cross’s research for the book was clearly profound and extensive—delving into family snapshots and archives, consulting with lead architects and engineers, and logging 125-plus interview hours. Then she deftly wove together the myriad threads, including unexpected, relevant background details for each key player. The book is full of striking revelations.

For example, the only bank willing to finance this unconventionally cantilevered glass-and-steel house, on such an implausible site, was the African-American-owned Broadway Federal, where Paul R. Williams, the Black architect with Modernist leanings, served on the board. For unknown reasons, the bank required a swimming pool (not previously in the design), which became compositionally important, with the entry sequence crossing the pool patio, perceptually amplifying the house’s rectilinear transparency.

Another surprise: one of “the girls”—the two women in summer dresses, casually chatting in the living room in Shulman’s famous photo—was the fiancée of well-known San Francisco architect Jim Jennings, then an architectural apprentice, assisting with the shoot.

Cross also tells how the Stahl offspring have regularly jumped off the roof into the pool. And she reveals that the house’s original GE kitchen appliances (long gone) were pink!

Among the book’s many engaging images are stunning professional photos, family snapshots, artwork featuring the house (by David Hockney and others), and original letters, contracts, and receipts, for what now seem quaint sums.

The volume’s second half, however, is not as compelling as the first. Sections describing movie, TV, and ad shoots at the house could have been reduced, perhaps more effectively, to an amazing list accompanying the visuals (among them, a Simpsons poolside scene). Captions for all images would have been welcome. And the prose—which is generally clear and engaging—occasionally gets effusive or metaphor-heavy. But these are minor quibbles.

The house, now operated as a family business, hosts over 6,000 paid visits a year. With interior staging courtesy of Design Within Reach, the original design remains largely intact—and some modified elements, such as kitchen counters, will eventually be restored.

Through the lens of one important building, the book offers a compelling model for examining history and social change. And Bruce Stahl is right: it’s a story well worth telling.