Architectural praise for porosity aside, too many 21st-century glass office buildings tend to be impervious and sleek—thin-skinned structures that offer little in the way of visual richness or tactile joy, no matter what their impact on a skyline might be. 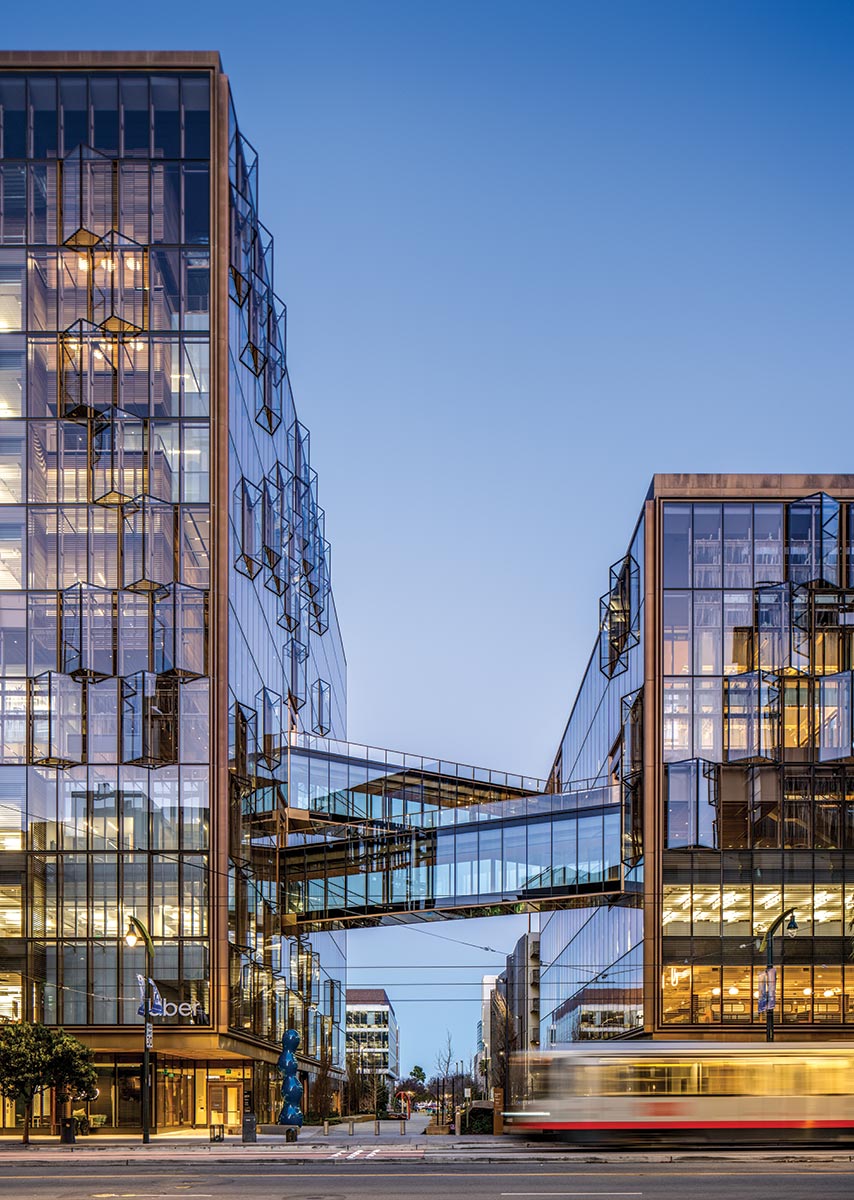 The operable facades (above and top), along with the multistory circulation zone beyond, lend the building skins a surprising depth. Photo © Jason O’Rear, click to enlarge.

That’s part of why two buildings by SHoP Architects for Uber in San Francisco’s Mission Bay district offer such a compelling break from the contemporary norm. The forms are simple, with two glass cubes of six and 11 stories separated by a wide pedestrian mews, but the copper-toned structures function like suave machines, where glazed wall panels open and close in pairs, accordionlike, in response to indoor temperatures and exterior weather conditions.

The operable skin—dubbed a “breathing facade” by SHoP—is controlled by a small weather station on the roof of the taller building and allows the circulation corridors and shared spaces of the two buildings to rely primarily on natural ventilation. And because those zones are pulled to the edge of the facade—with communal spaces stacked in an angular weave connected by stairs and bridges so that no two levels are alike—they add a perceptual depth that makes the impassive forms unexpectedly engaging from the outside. 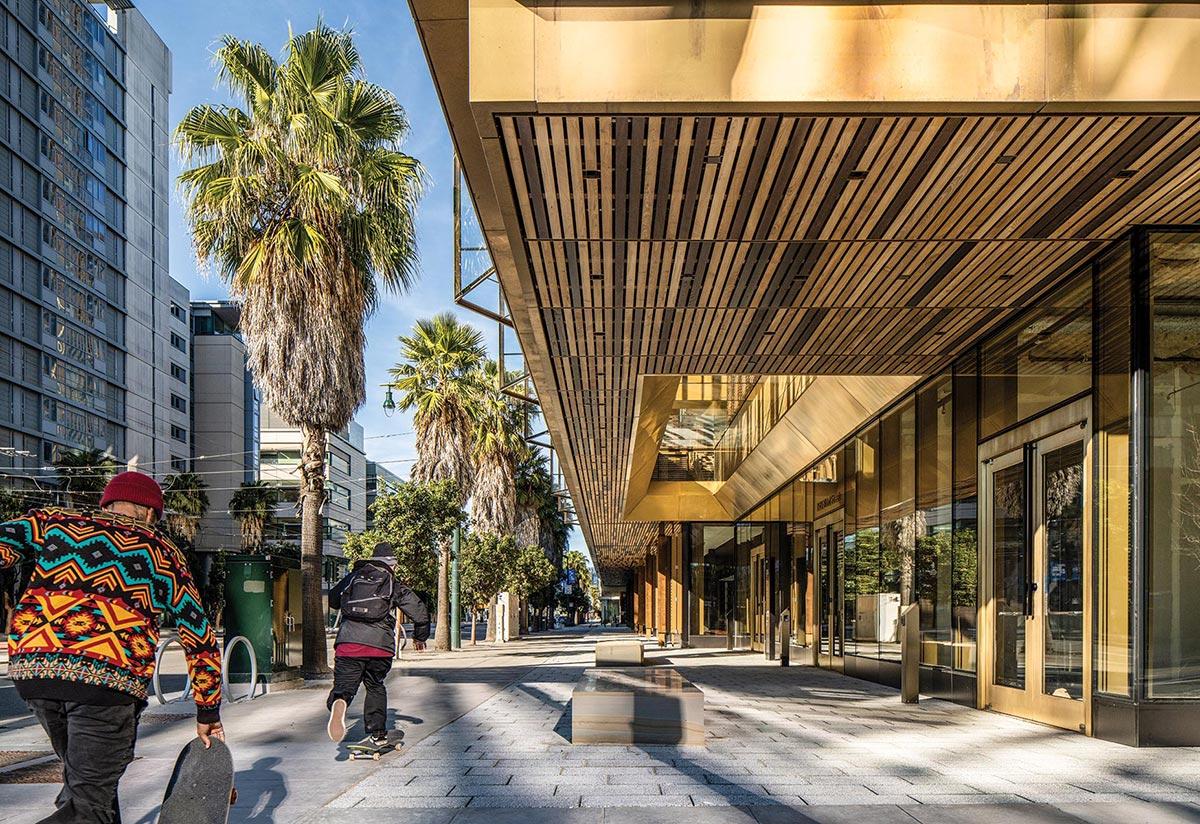 The buildings are oriented along a major Mission Bay thoroughfare. Photo © Jason O’Rear

The circulation zones along the western edge of the two buildings together comprise what Uber refers to as “the commons,” with nooks of varying size fanning out at corners and along the facades’ operable portions. The layout is unorthodox but beguiling, giving employees options for chilling out individually or in small groups beyond the standard tech terrain of white workstations and open floorplates. 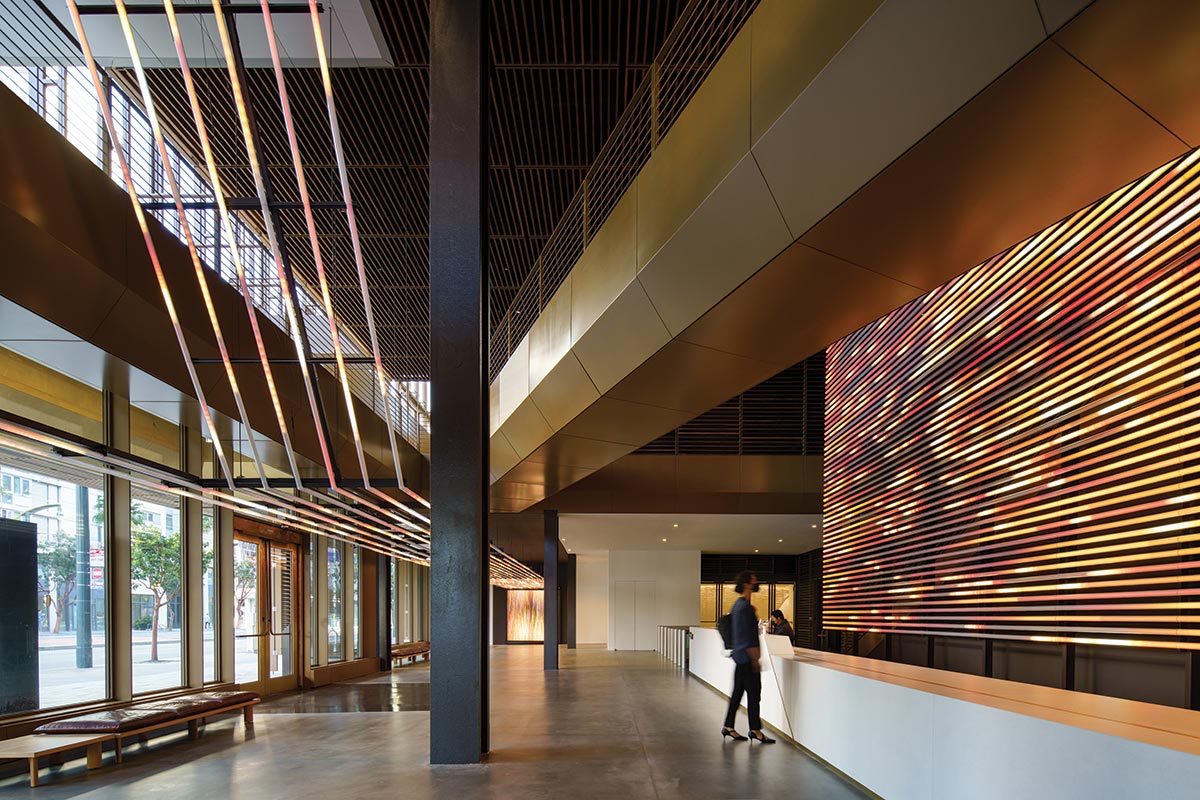 The commons begins in the lobby, which includes a media installation by HUSH (1), and extends vertically through both structures. Within the commons (2), social spaces are stacked, though no two floors are alike. Photos © Jason O’Rear 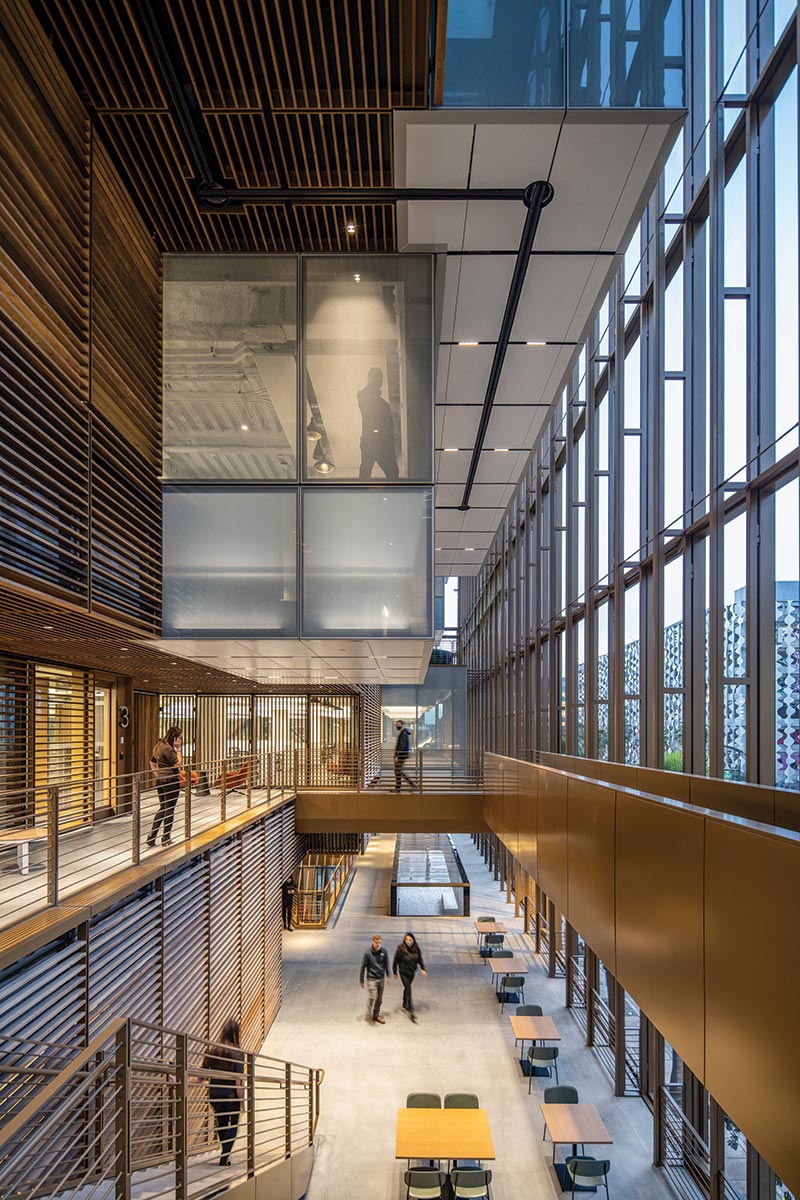 “We meant the circulation spaces to be a transition between the office and the city, but we also wanted to create the opportunity to provide spaces where you’d want to work or hang out,” said Shannon Han, an associate principal at SHoP. (SHoP designed the buildings’ shells and all shared areas; the more standard office portions of each floor were done by RMW Interiors.)

The operable windows, which quietly fold out automatically between 6 and 30 inches, depending on the thermal conditions, tend to be located at clustered chairs or along larger areas where employees can make themselves comfortable. (The curtain wall panels that enclose conventional office spaces are inoperable, since these parts of the buildings aren’t naturally ventilated, though the glass is infused with horizontal fritting to reduce heat gain.) For the top floor of each building, SHoP has expanded the commons to offer generous furnished landings—chic aeries that also deliver the see-through experience that most glass commercial buildings only promise, beneath skylights that pivot open or close in response to commands from the weather station. Opening the skylights pulls hotter air upward and keeps the circulation spaces from heating to uncomfortable levels. The commons, with its natural-ventilation strategy, is expected to reduce energy consumption by 20 percent, contributing to the buildings’ LEED Gold status. 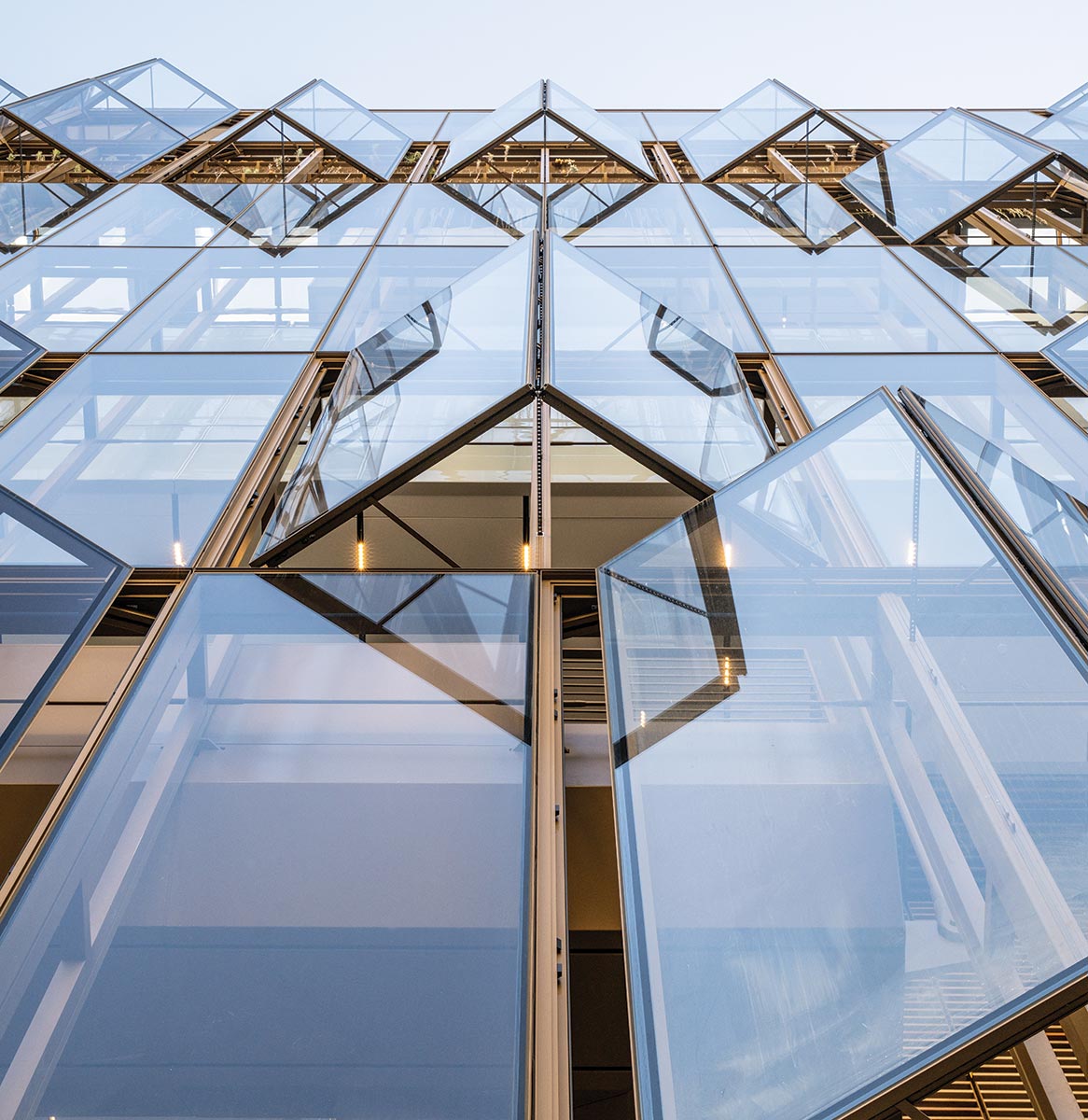 The windows, controlled by a rooftop weather station, quietly fold open automatically between 6 and 30 inches, depending on thermal conditions. Photo © Jason O’Rear

Even without the surprise of the operable panels, the facade has a more distinctive look than most of today’s sleek boxes: the glass is framed in a grid of Muntz metal, an alloy of copper and zinc (“It’s like brass, but cheaper,” Han says). SHoP has carried that coppery tone inside by using elements such as brass-hued railings and slats of Spanish chestnut, which veil the inner glass curtain walls dividing the commons from the office areas. The individual pieces of wood have been baked to pull the material’s sugars to the surface, a sort of natural stain in multiple shades.

Another unexpected feature is the pair of two-story sky bridges set at cross angles, linking the two buildings. Each span has one level that’s glassed in, topped by another with glass railings that is fully open to the elements. They pass above the 69-foot-wide pedestrian lane—imaginatively landscaped by the San Francisco firm Surfacedesign—and have dotted fritting to keep birds from flying into the glass panels. And, because this is San Francisco, the delicate crisscross of skywalks hides a brawny structural element—bridge joints that allow up to 6 feet of movement in response to major earthquakes, one of Han’s favorite parts of the complex. 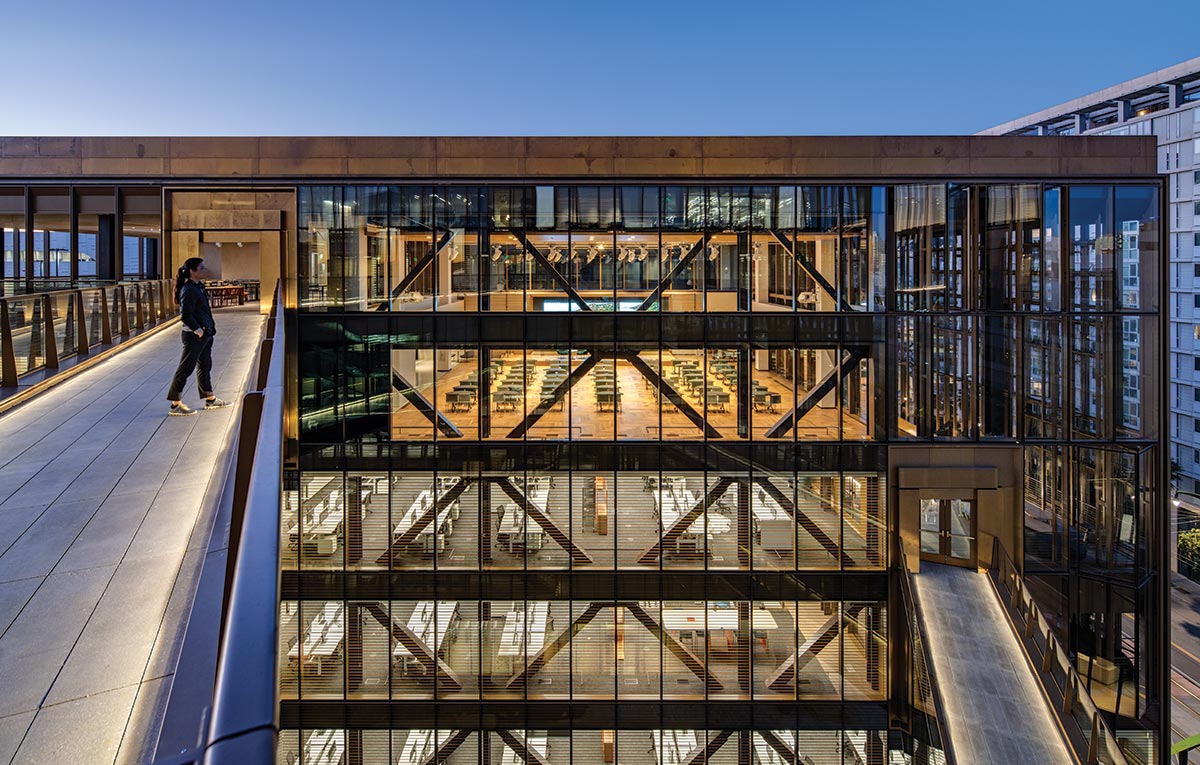 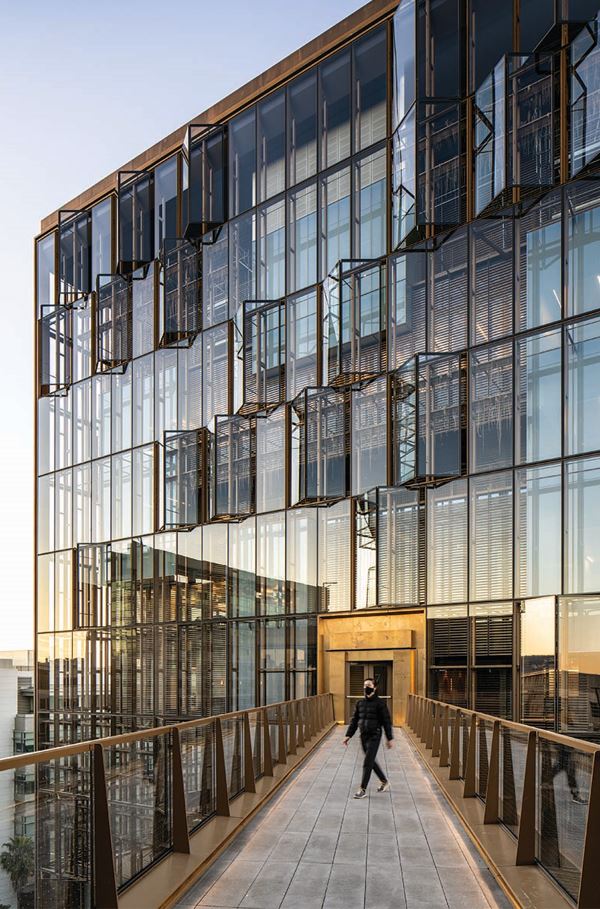 All these factors blend together to create an urban presence that’s austere yet intriguing, well-tailored and crisp, beckoning the passerby to take a closer look, especially if they realize that the open panels they noticed an hour ago now are closed, while other outward pleats have appeared.

The payoff for Uber? A complex laced with kinetic passages that make traveling on foot more stimulating than catching an elevator. The standard tech office elements with mechanical ventilation are here, in the conventional workspaces shielded from the circulation commons behind the Spanish Chestnut slats. The obligatory multi-cuisine bazaar of a cafeteria is tucked into the second floor. But the commons offers something more subtle. “It’s all about interconnecting, getting places vertically and horizontally, choosing your own path,” says Kimberly del Rivero, Uber’s “Workplace Experience Manager.”

The buildings were completed early in 2021, but the rise and fall of Covid variants hobbled the move-in plans. As of February, the 11-story structure was still closed to workers; its six-story counterpart held far fewer than the 1,400 people for which it was conceived. On a recent visit, there was a largely vacant feel, except in the overscale cafeteria. But some individuals already were gravitating to the commons and its calming yet social ambience, a sort of transition zone between the public and private realms. As employees return to offices, many are likely to seek out areas that somehow offer relaxed comfort amid the uncertainty of transition; and while the design was conceived years before the pandemic struck, the commons’s combination of high tech and low stress could pay benefits for some time to come. 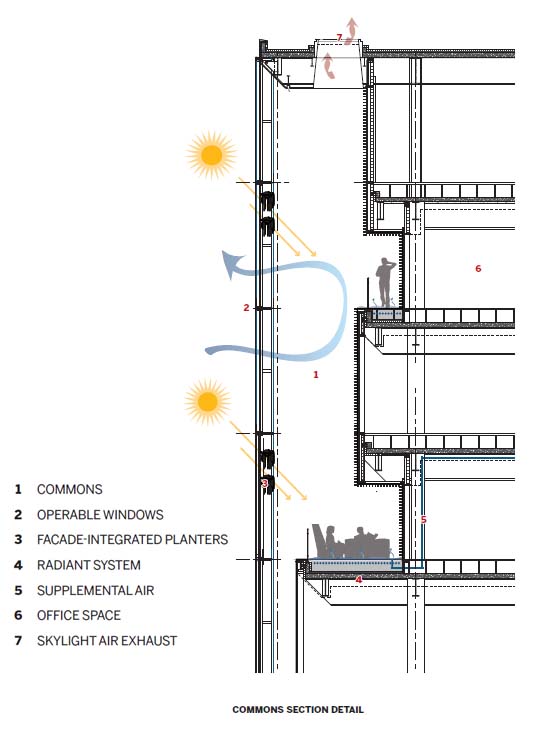 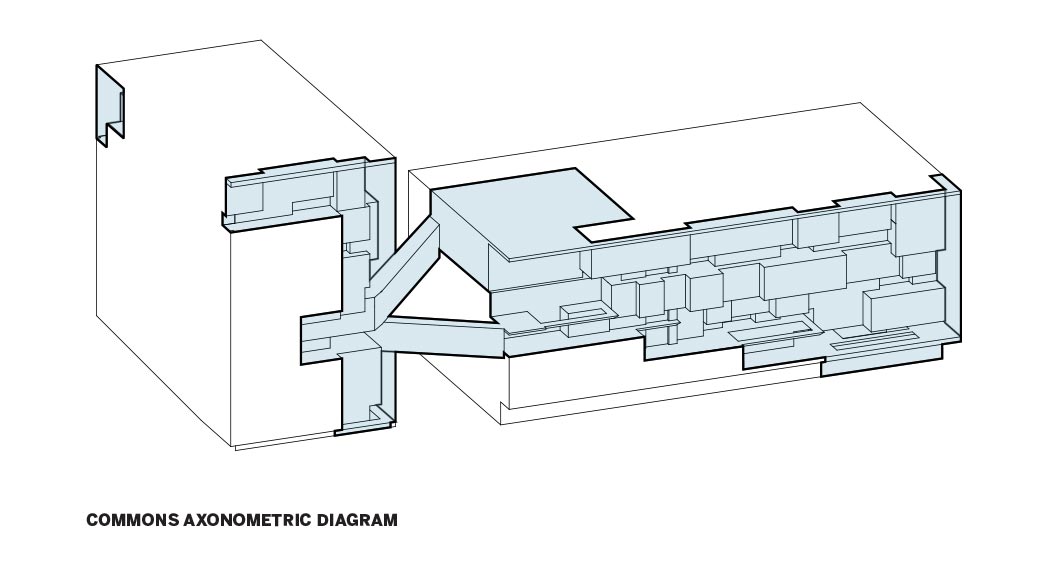