This website requires certain cookies to work and uses other cookies to help you have the best experience. By visiting this website, certain cookies have already been set, which you may delete and block. By closing this message or continuing to use our site, you agree to the use of cookies. Visit our updated privacy and cookie policy to learn more.
Home » Atop a Belgian Warehouse, Agrotopia Is a Shimmering Experiment in Vertical Farming
ProjectsBuildings by TypeWorkplace Design

The particularly European approach to the swiftly evolving phenomenon of rooftop farming is typified by Agrotopia, a 2.5-acre expanse of aluminum-framed greenhouses built on top of a pre-existing L-shaped industrial warehouse in the Belgian town of Roeselare. Whereas rooftop food production in the U.S. often aims to make a dense urbanism more verdant, as well as provide fresh (though pricey) produce to the restaurant market, rooftop farming in Europe has emerged alongside existing agricultural production and is being built in landscapes at the border of suburb and country already inhabited by intensive farming and light industry. 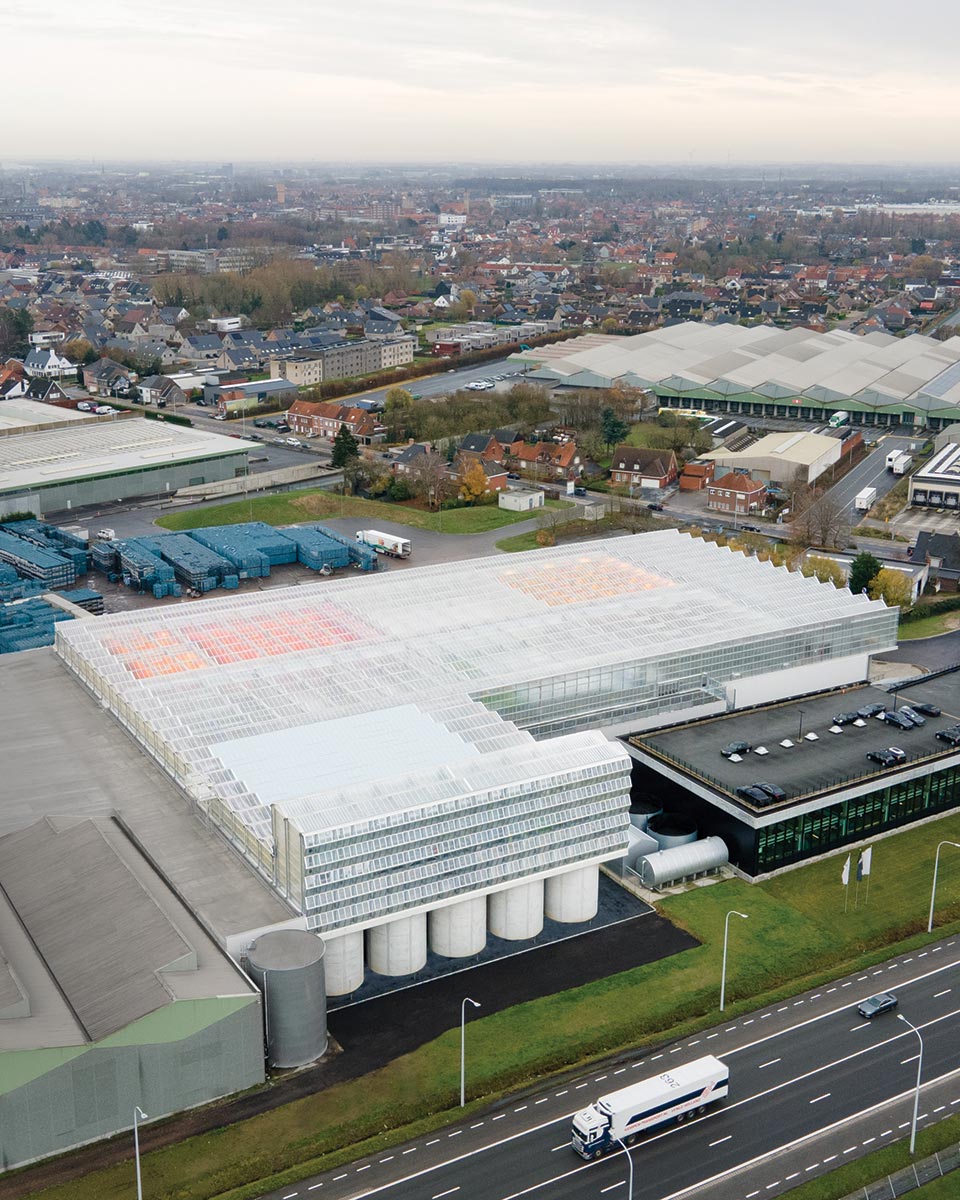 Agrotopia is home to Inagro, a horticultural-research entity funded by the regional government and the European Union, which chose to locate its experimental greenhouses in Roeselare because the city is home to key food industries and is the distribution hub for nearby food production. For this project, the organization teamed up with REO (a local auction house for selling to food wholesalers) which, when making plans to build a new facility for cleaning transportation crates, offered its roof to host Inagro’s suite of offices and 18 research greenhouses.

Beyond its progressive mission, the building is also an experiment in architecture. At about the same time that these two companies were forming their partnership, the head architect of the Flanders region announced a new policy for improving the design quality of agricultural buildings by supporting forward-looking initiatives. The REO/Inagro project was identified as a perfect candidate for receiving extra funding to enable the development of a new typology.

Learning of this program in 2015, Niklaas Deboutte, the Roeselare-born founding director of Antwerp-based META, sought out his former teaching colleague at the university of Delft, Jago van Bergen, who specializes in the design of roof structures for food production. While the scale of Agrotopia was significantly smaller than some projects van Bergen had recently done in China, it presented ample opportunities for innovative design. 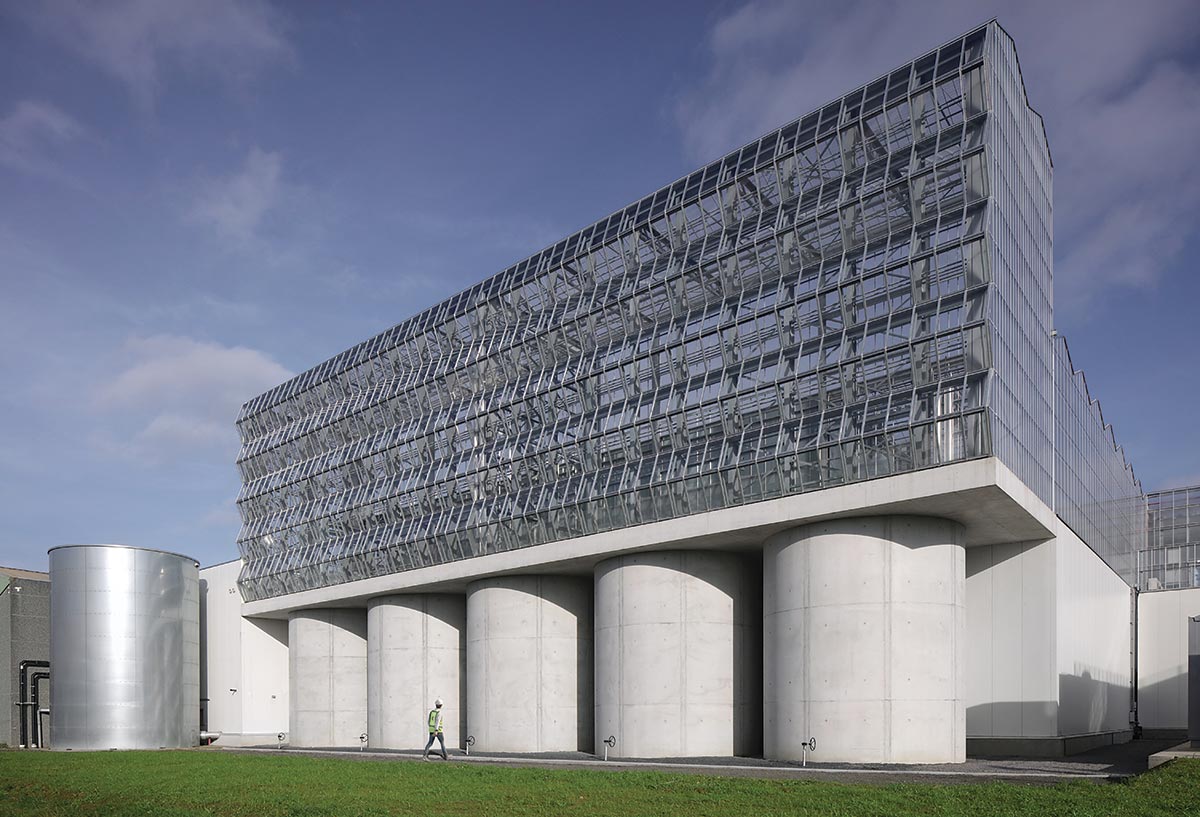 The bulk of the greenhouses on top of the industrial shed are identical to many seen across the fields of northwest Europe. Two, however, are anything but conventional. One double-height greenhouse—which is supported by five-story-high concrete drums that hold rainwater for irrigation—will contain experiments in vertical farming and, with its soaring accordion-like glass facade, addresses the adjacent ring road (Deboutte calls this the head of the building). Also—in contrast to standard greenhouses, which employ fritted glass that obscures views in—interiors here are on display. “Any building that’s in the public realm, that faces the city, needs some kind of transparency,” says van Bergen. 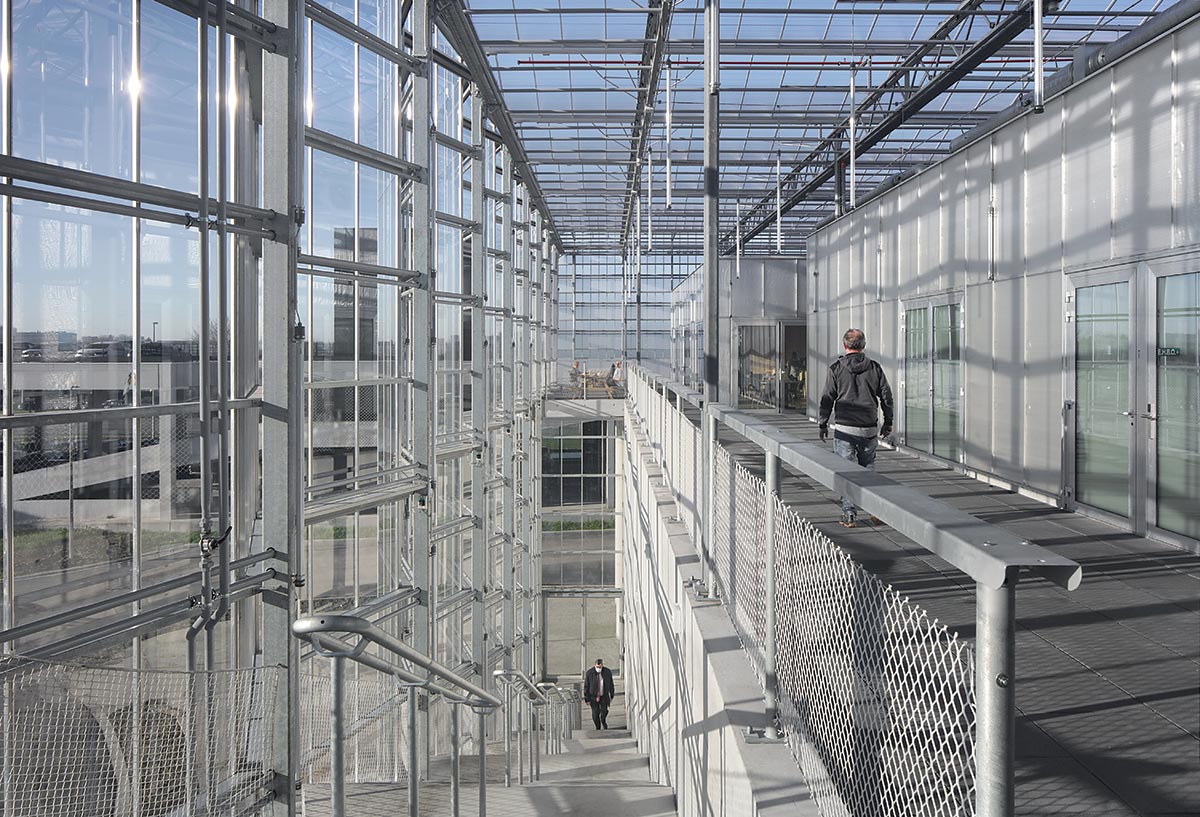 The building is accessed via a glass-enclosed stair. Photo © Filip Dujardin

At the entrance of the building, or the tail, as Deboutte calls it, is the second bespoke greenhouse space. Here, the glazing comes down to the ground, encasing a concrete stair (which sits atop columns that also help support the roof structure). This strategy gives the lobby at the top of the entrance stairs a semipublic feel and creates a relaxed, informal space that can be shared by visitors, administrative staff, and agricultural workers taking a break. The office spaces are legible as independent pavilions, sitting as they do under the continuous roof they share with the greenhouses. Clad on the outside with insulation-lined aluminum panels and on the inside with chipboard, these discrete volumes can be shaded by interior fabric screens along the zigzagging glazing. 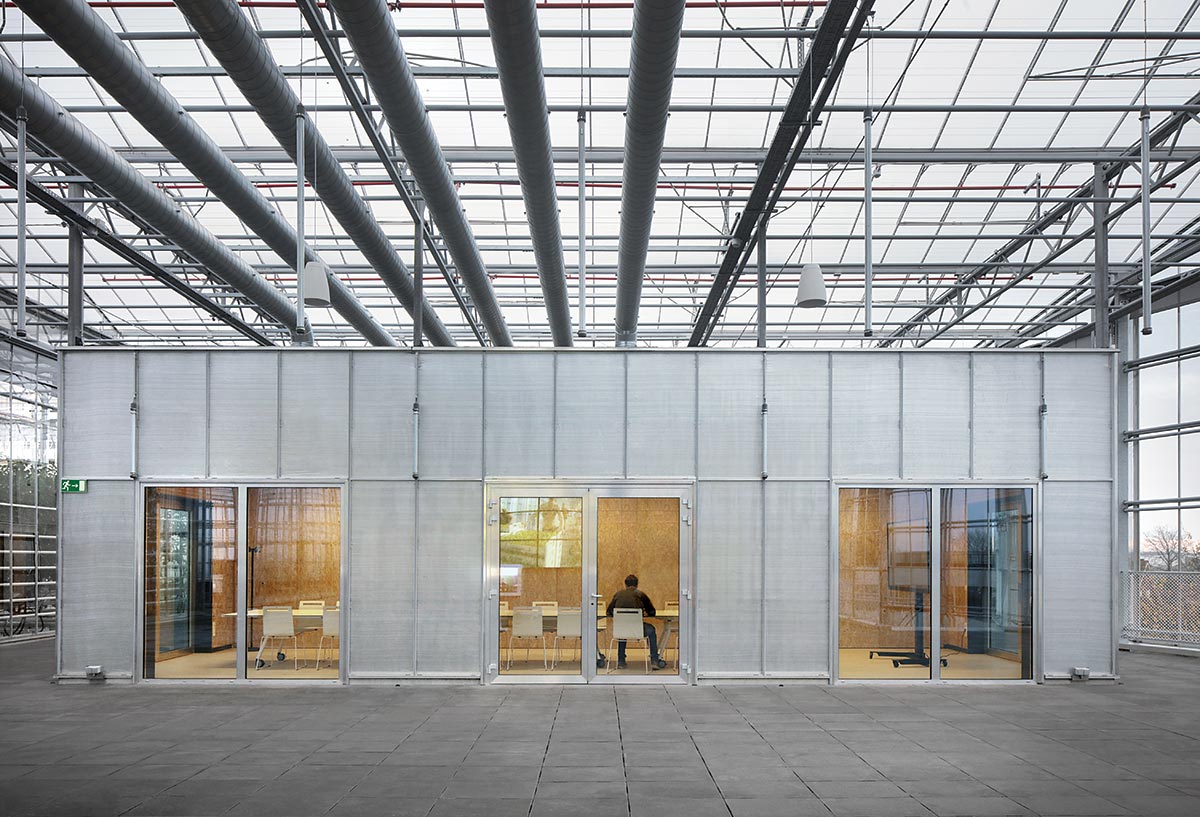 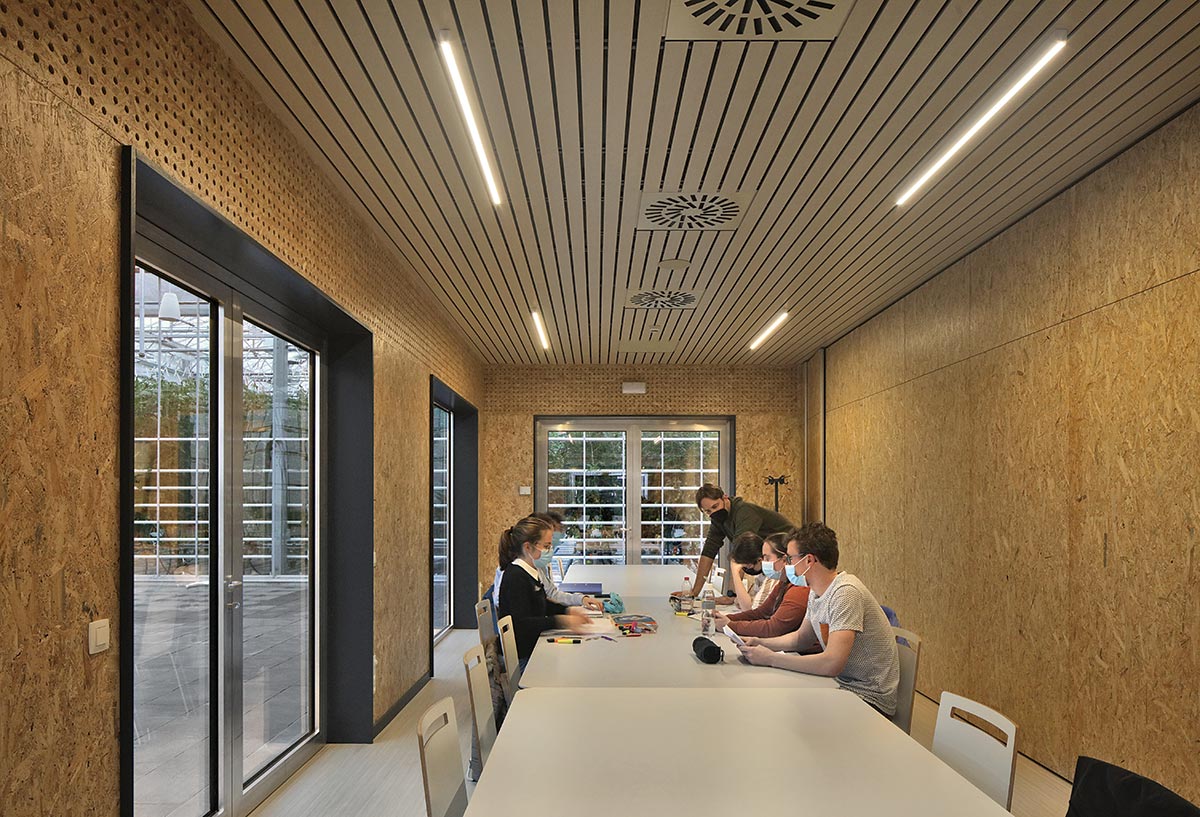 The team’s design solutions for much of the building between the public-facing head and tail are subtle but clever. The greenhouses are separated to allow different climates for soil-based or hydroponic growing, and are surrounded by 10-foot-wide walkways; these not only allow agricultural workers and scientists to ride bicycles to reach the farthest parts of the building, but also provide gathering areas for both workers and visitors. Water pipes and mullions are painted a gray that is similar in hue to the exposed aluminum structure, creating a congruence between the elements. On the exterior, the team tucked gutters behind vertical supports for a cleaner aesthetic that emphasizes the clarity of the aluminum-and-glass building. 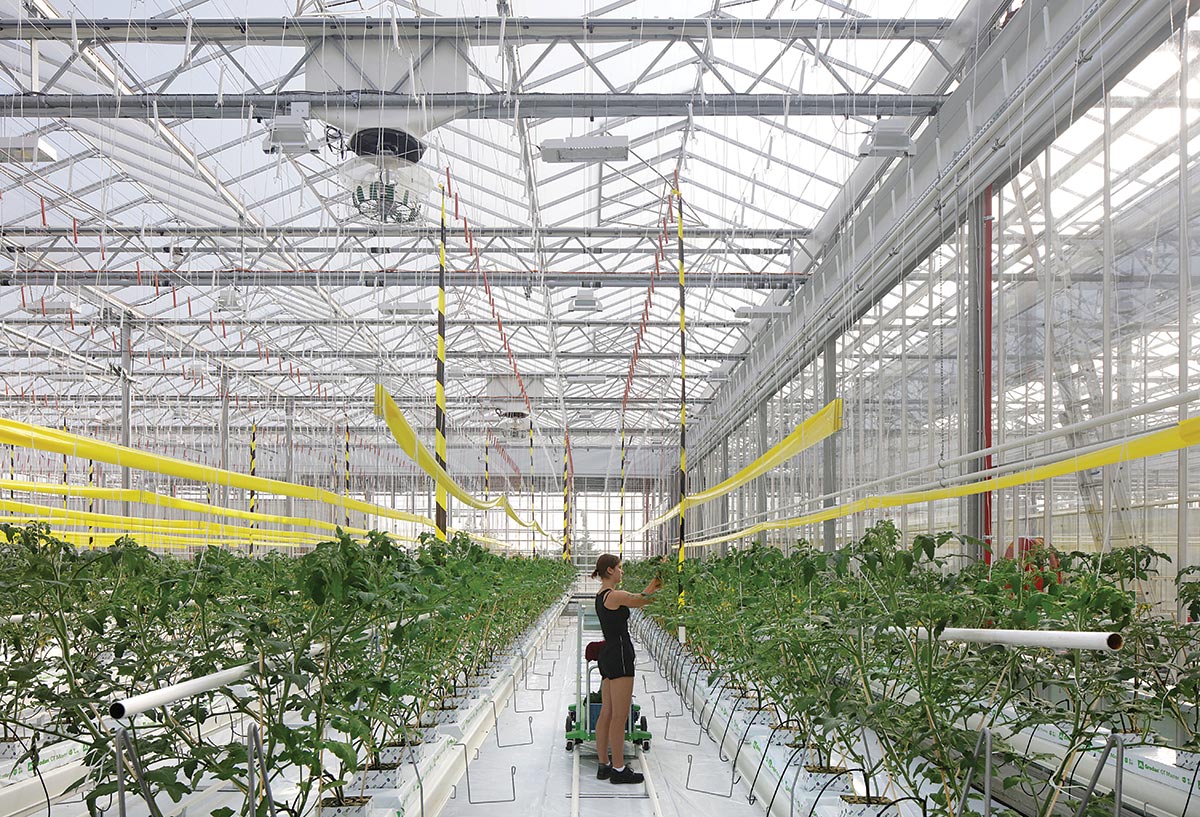 The workplace is light-filled and airy Photo © Filip Dujardin

In addition to its other innovative qualities, Agrotopia provides a road map for how this type of industrial facility can work synergistically with an existing infrastructure. Seventy percent of the building’s incredibly small budget of about $13 million was spent on a pipe that links Agrotopia to the local incineration plant, transferring excess heat to the greenhouses. So while the operations strategy is sustainable and inexpensive, the budget remaining for the rest of the building was minimal. 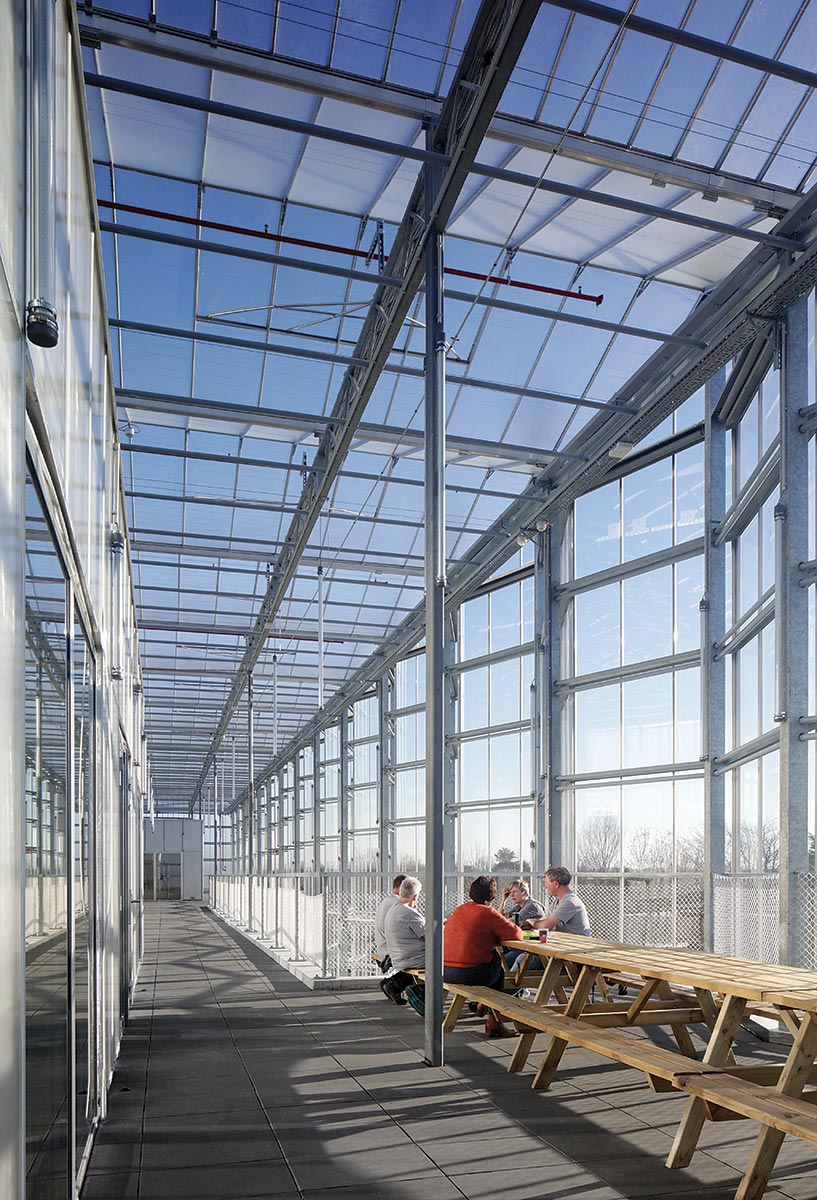 An employee gathering space has expansive views up and out. Photo © Filip Dujardin

The construction process was, admit van Bergen and Deboutte, rather fraught. Although calculations had been made before the original shed building was erected in 2015, to ensure that it could support greenhouses on top, the structure proved to be insufficient. The original concrete roof needed strengthening with an additional layer of concrete before the greenhouses’ suspended concrete floor slab, raised on thousands of plastic footings, could be added. All the irrigation and nutrient tubes, as well as the cables for the computers that control them, are concealed within the cavity between concrete slabs; this renders the growing space cleaner and more legible than a conventional greenhouse. The facility below was largely unaffected during construction, until the elevator shaft was added, when water ingress occurred. “If you are going to build a greenhouse on top of your factory, it’s better to do it at the same time you build your factory,” is Deboutte’s laconic summary. In an experimental building, it is perhaps no surprise that some mishaps should occur during construction.

In the long term, the work done inside Agrotopia by a team of biologists and food scientists on increasing food production could prove greatly useful, as will its role in encouraging densification at the city periphery and developing an architecture that makes suburban farming congenial for workers. In the short term, meanwhile, the building is a shimmering showcase for a new kind of agriculture and architecture, as well as the possibilities of a new way of living. 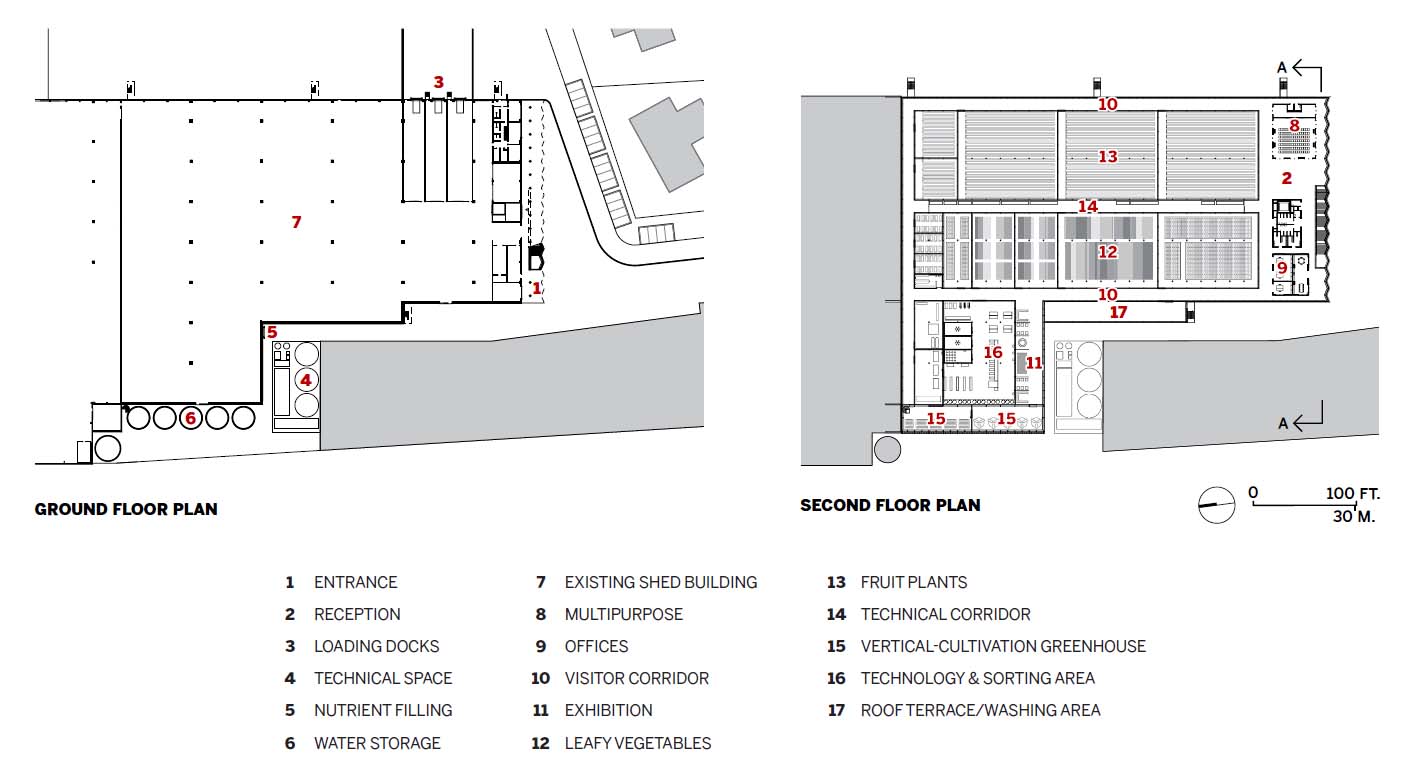