Reset: Toward a New Commons, a new exhibition on view at the Center for Architecture in New York through September 3, highlights four design proposals aimed at fortifying the ever-threatened concept of the commons. All four point toward new possibilities for fostering community through design, with a particular emphasis on addressing the concerns of vulnerable populations.

In America, the built environment bears the mark of ongoing tension between private interests and the public realm, between what is often framed as “individual liberty” and the common good. Long before the pandemic highlighted economic disparities and further isolated vulnerable populations, public spaces have been shaped by design strategies often motivated by racism and other exclusionary forces, from red-lining and benign neglect to escalating gentrification and the infringement of private interests on once-shared places.

In early 2021, the Center for Architecture issued a nationwide request for proposals for projects that imagine alternative approaches to the commons, encouraging “new ways of living collaboratively,” addressing “environments of multiple scales and exploring “ideas of process and policy around one or more of three typologies: living, healing, and gathering.” The four winning proposals were announced last August. Reset curators Barry Bergdoll, a professor of art history at Columbia University, and Juliana Barton, the director of the Center for the Arts at Northeastern University worked with each project’s design team for six months to develop the proposals into exhibits. 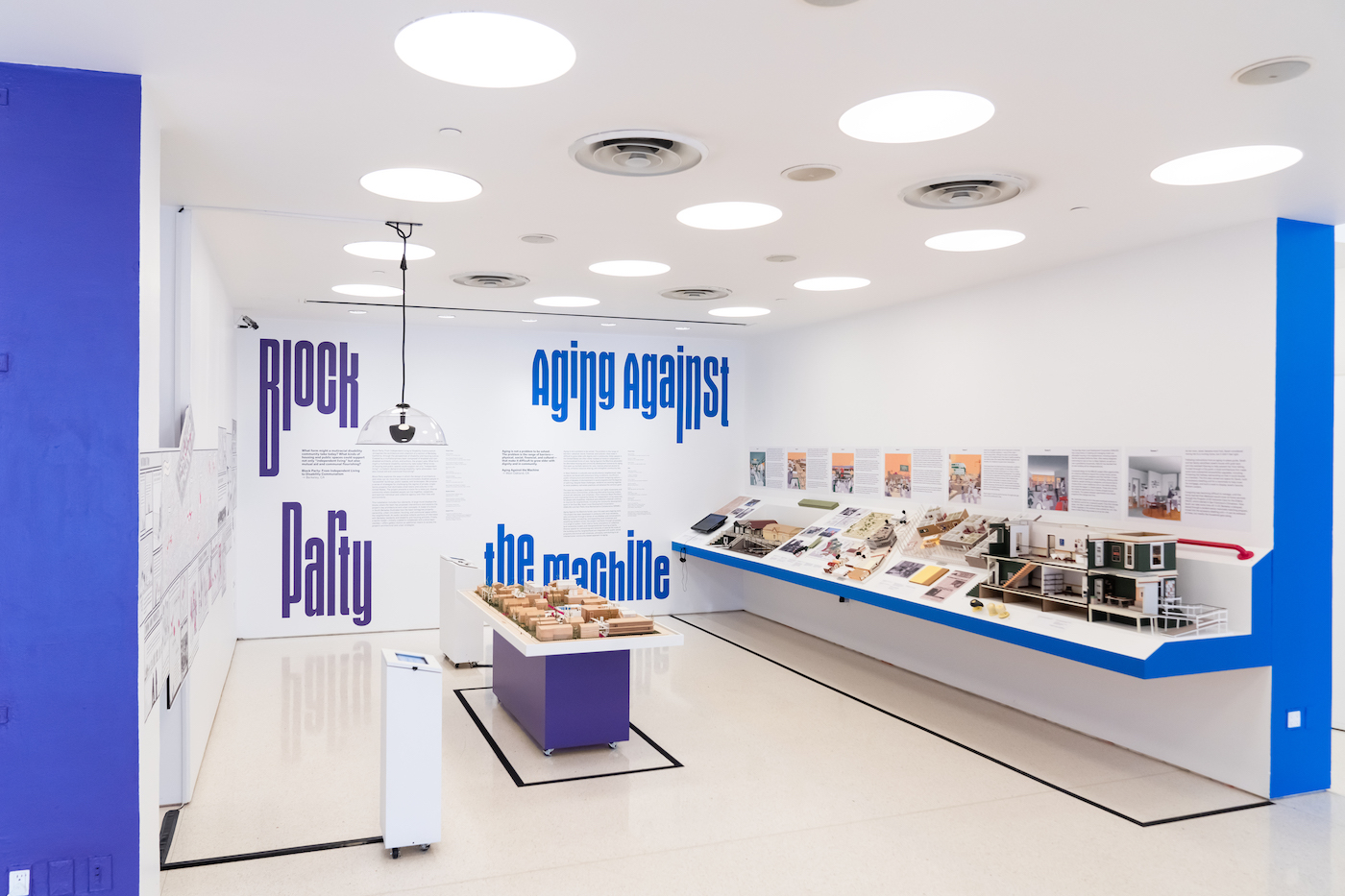 Just steps away from one of Manhattan’s premier commons–Washington Square Park–the exhibit, designed by Natasha Jen of Pentagram, spans three floors and includes a selection of case studies and a reading room, in addition to the four proposals. Each proposal explores evolving notions of community and place, and is locally specific: two are centered in the San Francisco Bay Area, one in Cincinnati, and one in New York City’s East Harlem public housing. They are the work of interdisciplinary teams, composed of academics, activists, artists, non-profit organizations, and community members, who employed a participatory design process.

“Aging Against the Machine” and “Block Party,” on the first floor of the exhibition, are focused on two diverse and underserved neighborhoods in the Bay Area. For the former, seven “scenes,” supplemented by two large-scale models and material displays, highlight existing, former, and future initiatives to address the needs of the aging population in West Oakland. The display notes how the neighborhood has historically been a center for community initiatives: in the 1960s the Black Panthers organized a van service for vulnerable local residents in a program called “Seniors Against a Fearful Environment.” This historical context provides a precedent for implementing community-led design initiatives that combat the effects of systemic, racially motivated disinvestment and lack of social services that put elderly community members at risk. 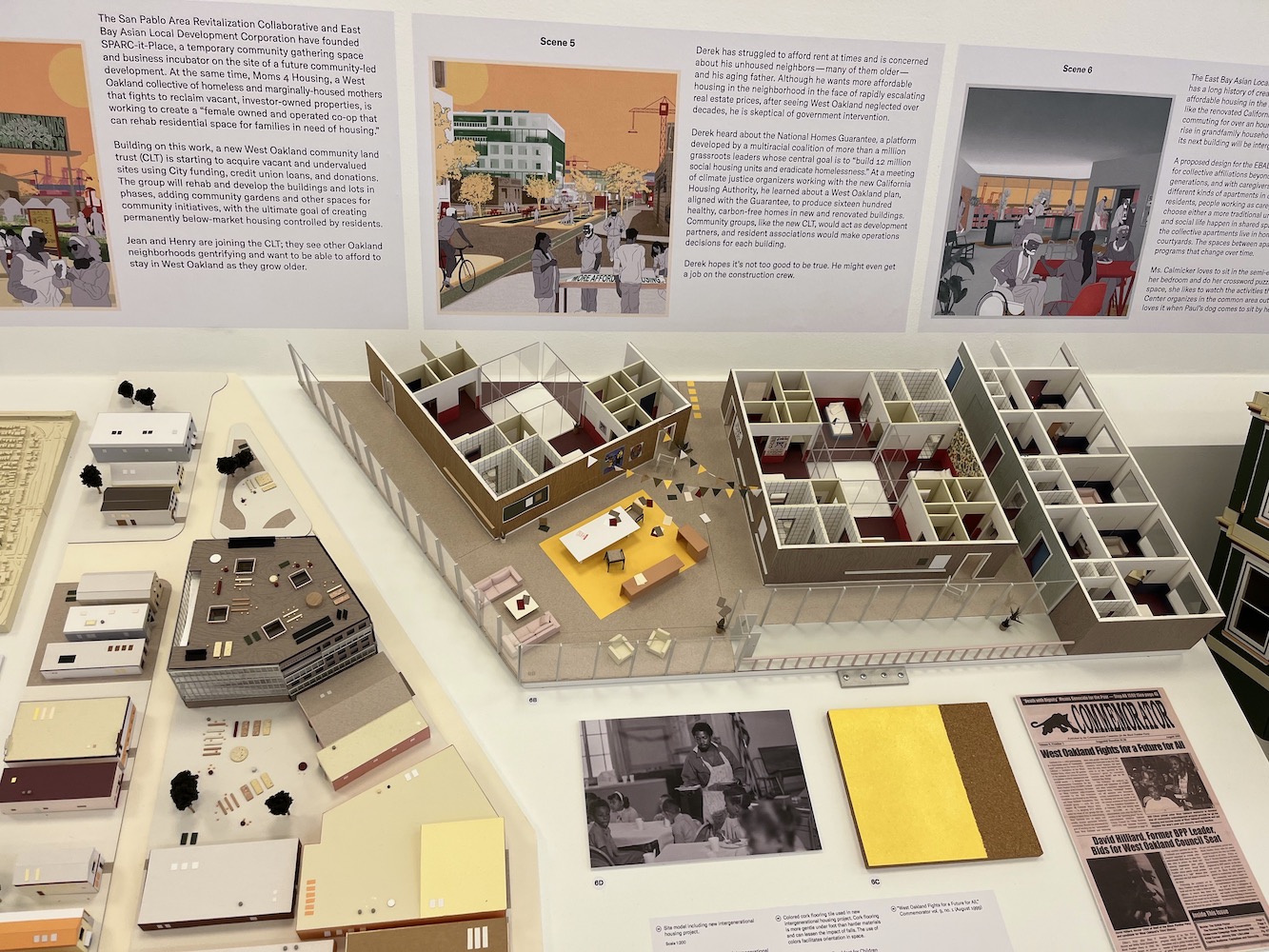 "Aging Against the Machine" was led by faculty from the Pratt Institute, Barnard College, and the California College of the Arts. Photo by Pansy Schulman

The models highlight two alternative housing typologies that support communal aging in place: one features a wide shared porch (with ramp access) to combat isolation, and the other encourages intergenerational living arrangements. At the smallest scale, the proposal also features materials for retrofitting houses for seniors: corked flooring to prevent slips and falls, and rubber door knob covers to ease access.

The adjacent “Block Party” offers a reimagining of a specific area in Berkeley,  with the aim of “envisioning a multi-racial disability community that addresses individual needs, as well as shared pleasures and communal luxuries.” The proposal argues for a paradigm shift, away from individual housing models, to allow disabled persons to more easily share resources and spaces. A large, colorful model features reimagined housing typologies such as “honey-comb houses,” a designated car-free “meander” that provides a pedestrian connection through the neighborhood, detached lifts to address accessibility without elevators and ramps, and the replacement of a previously demolished, communal “warm pool.” 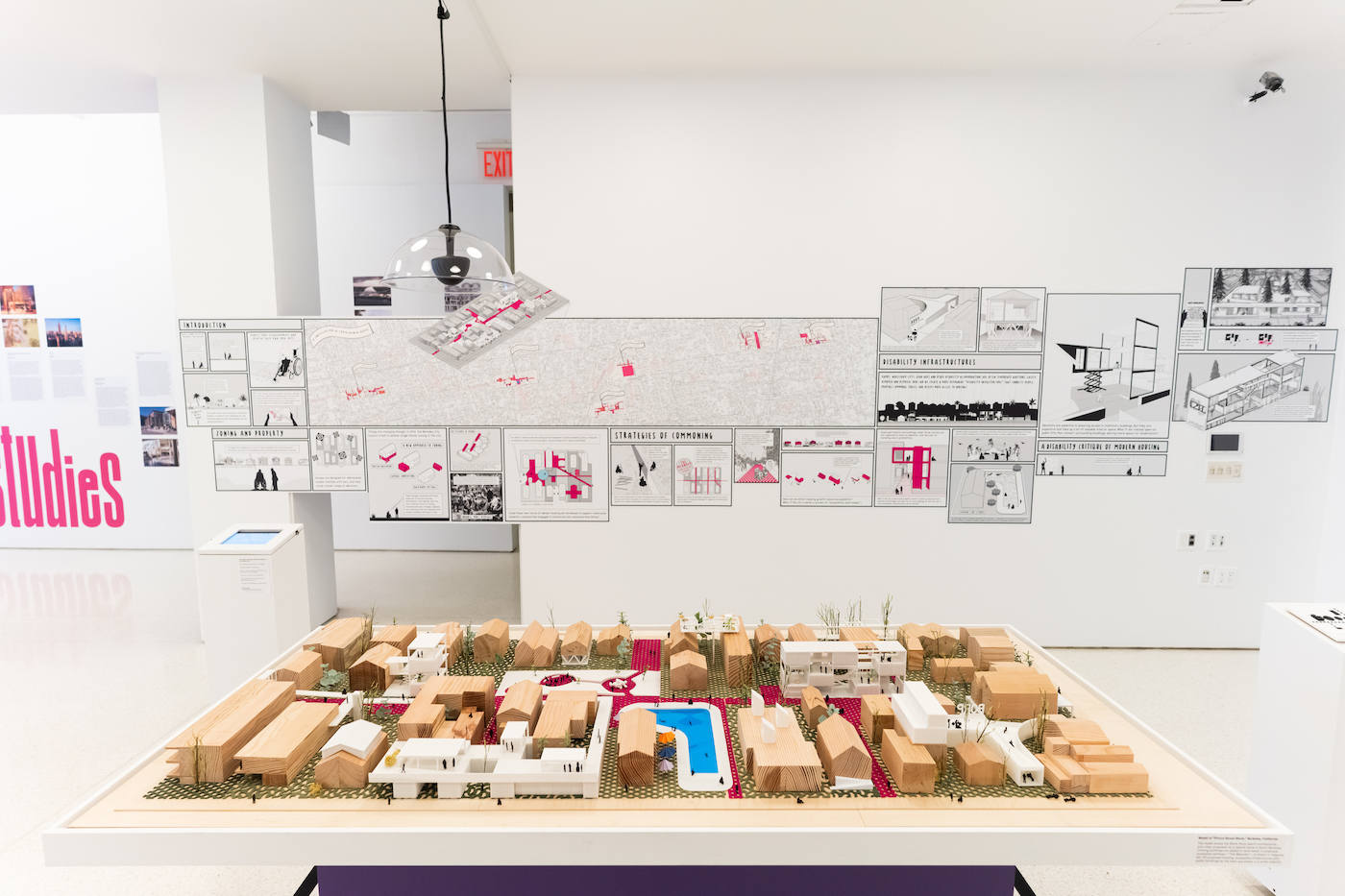 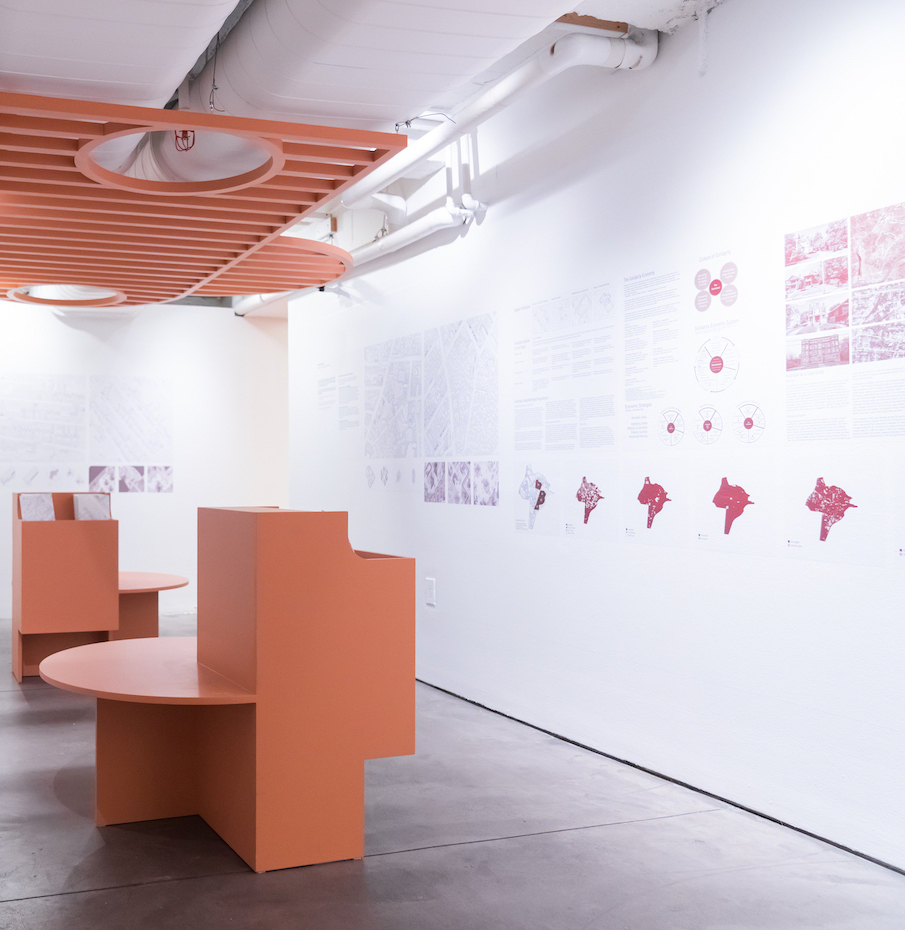 "Decolonizing Suburbia" was developed by a multidisciplinary group of architects, designers and sociologists.Photo © Asya-Gorovits

Downstairs at the Center, “Decolonizing Suburbia” looks at the broader problematics of suburbs in America, using the Cincinnati neighborhood of Avondale as a site study of a “low-density neighborhood in a legacy city.” Like the other proposals, it highlights historical initiatives and touches on broader community strategies of “communing,” via policy ideas and community programs. Perhaps the most interesting part of the proposal is its discussion of how individual housing models can expand our definition of the “commons” within the traditionally exclusive form of the suburb and the single-family home. One diagram lays out how a number of awkwardly-shaped vacant lots can be filled with long-, courtyard-, tall-, or corner-house typologies that can address housing needs beyond the nuclear family and incorporate shared spaces. The Long House, for example, functions somewhat like a dormitory, where young, single people can affordably live and work.

The process-driven “Re:Play” emerged out of a more focused study site and community work, emerging from six months of engagement with young residents of three different New York Public Housing Authority (NYCHA) campuses in East Harlem to reimagine shared spaces. Historically, NYCHA residents have been plagued by federal and municipal disinvestment which contributed to a lack of basic maintenance and infrastructural decay, and NYCHA residents are too often left out of the design decisions that impact their experience of home.

“Re:Play” incorporates video footage of the community design process and interviews with residents, as well as a selection of colorful two- and three-dimensional concepts to improve NYCHA’s public spaces. A display of imagined proposals by the Young Resident Designers (expressed in bright collages imposed over photographs of the existing spaces) range from repairing the often-broken recreational equipment or elevators, and creating gardens or a community mural, to more concrete design interventions. Devon Howell of the Robert F. Wagner Homes proposes removing car traffic and parking from NYCHA complexes to reclaim courtyards for residents, and Bobbye Hall of Thomas Jefferson Homes imagines a dynamic gathering space with a “People’s Soapbox” to replace an underutilized playground. 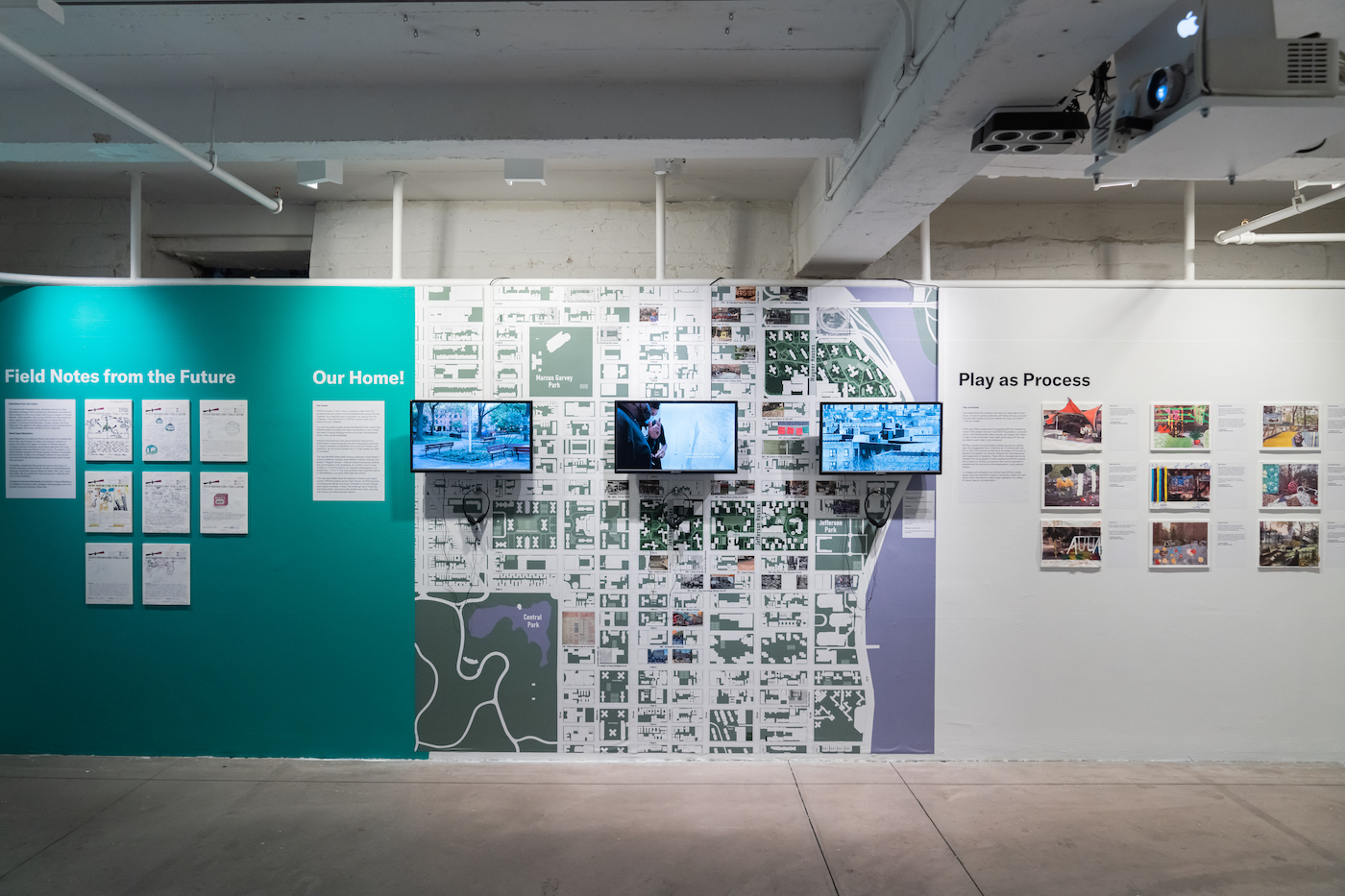 Students and faculty from the Pratt Institute worked with NYCHA residents to produce "Re:Play." Photo © Asya-Gorovits

As attempts to rectify the form-driven architectural interventions that have shaped the commons in previous decades, all four projects tackle complex issues of gathering with strategies that encompass design, policy, and community organizing. As an exhibition, the dense proposals are at times overwhelming for the viewer, especially in the case of the text-heavy “Decolonizing Suburbia.” But Reset shines when material and interactive enhancements—such as the tactile model that accompanies “Block Party” and “Re:Play”’s looping documentary footage—offer insight into context, process, and results.