Is Managed Retreat the Answer?

In the aftermath of Hurricane Sandy in 2012, the residents of Oakwood Beach, on the south shore of Staten Island, made a momentous decision. The neighborhood, in New York’s least dense borough, had experienced flooding before, but this hurricane had all but wiped it off the map, and many residents weren’t sure they wanted to risk rebuilding. A group of locals petitioned the state government to buy out and demolish their houses, using money from the federal Depart­ment of Housing and Urban Development, and within three years almost the whole community had signed on—around 180 homeowners in all. A decade after the storm, the land has begun to revert to nature, transforming back into the untrammeled wetland it once was. By the time the next storm comes, there will be no homes left to destroy.

As climate disasters grow more severe with each passing year, and as the federal government spends hundreds of millions of dollars to help adapt to these disasters, some communities in the United States have begun to consider the notion of “managed retreat,” or the coordinated movement away from the most vulnerable areas. Instead of armoring themselves against storms and fires, these communities are choosing to get out of the way altogether, surrendering their old homes to nature and relocating elsewhere. 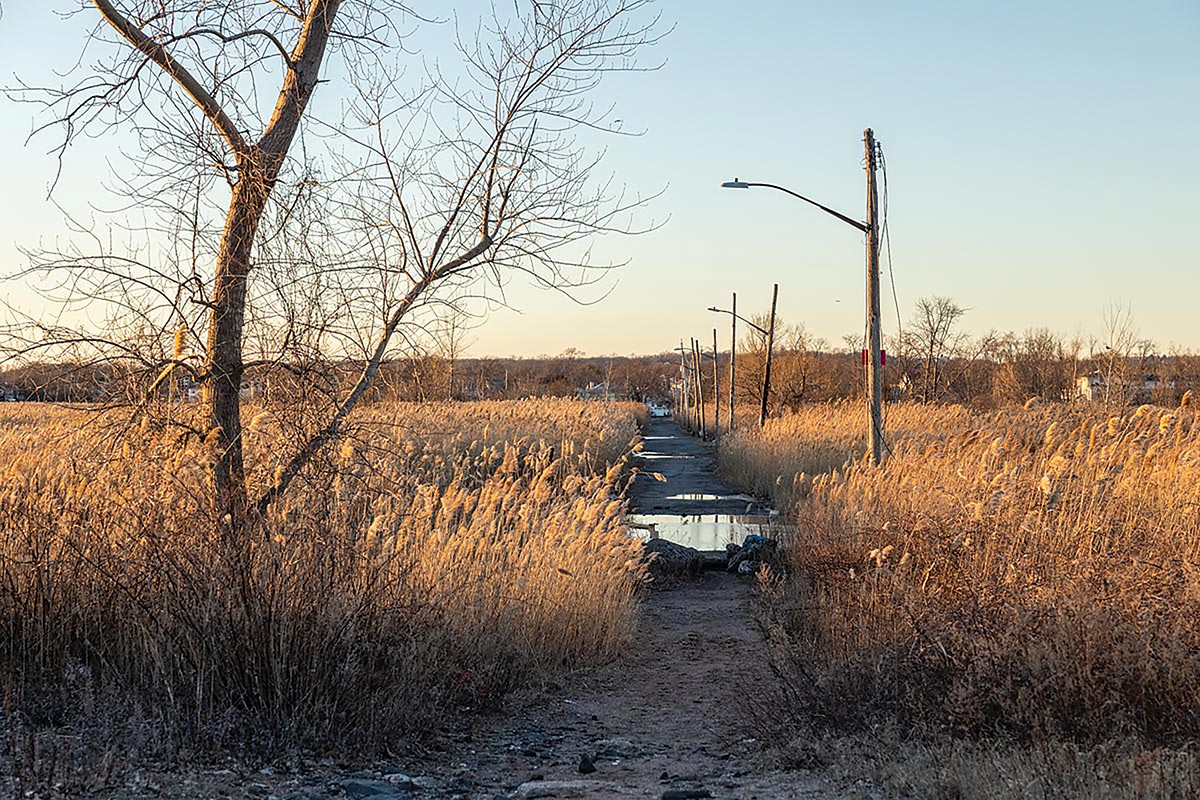 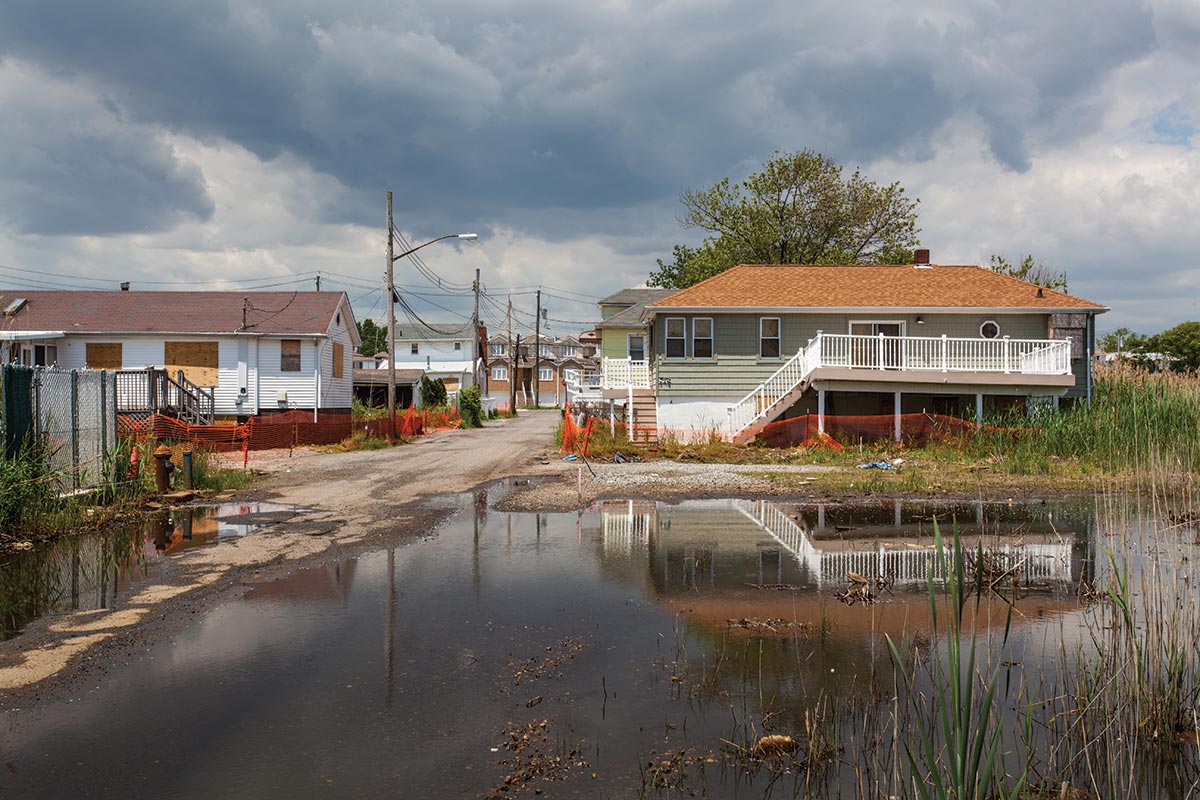 Nature is reasserting itself at Oakwood Beach on Staten Island (1) after many houses were flooded out (2). Photos © Robin Michals, click to enlarge.

This movement is still in its infancy, confined to small communities on the fringes of the natural environment, but soon many more towns and cities in the United States will be forced to confront the same decision as the residents of Oakwood Beach, and, for many communities, these decisions will be agonizing. Managed retreat can save lives and money and can help undo the past mistakes of planners and developers, but it also raises deep questions about people’s auton­omy, sense of community, and environmental justice. If not every neighborhood or town can stay put, who decides which must leave?

“Everyone agrees that they want [relocation] to be fair, and they want it to be just, but no one agrees on what that means,” says A.R. Siders, a professor at the University of Delaware who has studied managed retreat and its implications for environmental justice. “How do you define a community? And how do you handle dissent within a community? We’re very good at pointing out the injustices after they happen, but we really struggle with getting good guidance on doing this.”

The first managed-retreat efforts in the United States came about almost by accident, as the result of a shift in disaster policy. Faced with the mounting costs of severe flooding along rivers like the Mississippi, Congress in the 1990s authorized FEMA to buy and demolish properties that had been inundated rather than paying their owners to rebuild them. The agency has bought out more than 40,000 properties after disasters—like a 2014 mud slide in Washington state and 2017’s Hurricane Harvey in Houston—since then. Several cities, including Charlotte and Nashville, have developed their own local buyout programs as well.

While the federal buyout program was designed to save FEMA from paying to rebuild the same places over and over again, it now has come to alter built environments around the country, erasing whole communities and allowing nature to return. Because the program is voluntary, and localities can’t force residents to leave unless their officials pursue eminent domain, buyouts look very different in different parts of the country. In New Jersey, for instance, the state’s Blue Acres buyout program uses FEMA money to buy out population pockets where residents already have decided to leave after repeated flooding. In other communities, such as the northwest suburbs of Houston, near the White Oak Bayou, the county government bought out properties with FEMA money and now pays to maintain the empty lots, mowing the grass at regular intervals for the sake of the handful of homeowners who chose to stay behind.

Nevertheless, not every buyout has achieved community support. In the city of Kinston, North Carolina, the FEMA program led to the destruction of a historic Black neighborhood called Lincoln City with decades of history; the community was flooded by Hurricane Floyd in 1999, after which the city decided to buy it out rather than rebuild. Once a vibrant working-class community, the abandoned tracts of the neighborhood have disintegrated, returning to forests and swamps.

“It was community, it was family, it was love—everybody knew everybody, everybody stood in the gap for everybody,” says Eartha Mumford, a former resident of the neighborhood. After the storm, she said, Lincoln City residents “wanted to keep a hold on their property and go back in there, hoping we could do something with it. Then the city jumped in and they just took over.” Mumford, who now lives a few towns over, drives to the old neighborhood every so often to say hello to the few families who still live on the outskirts.

Lincoln City’s fate matches the trends that Siders identified in her study of climate adaptation in North Carolina as a whole. Siders found that wealthy white communities tend to receive more money for sea walls and other flood protections, while low-income communities of color were more likely to see buyouts and managed retreat.

In other cases, communities have relocated in their entirety to land on higher ground, rather than scattering to wherever they can find available housing. The most famous instance is Isle de Jean Charles, Louisiana, an island village long inhabited by Biloxi-Chitimacha-Choctaw Indigenous Americans, which has lost more than 90 percent of its landmass to sea-level rise, shrinking from 22,000 acres down to a few hundred. Most of the southeast Louisiana coastline now sits inside a levee system built by the U.S. Army Corps of Engineers that protects it from storm surge, but the federal government did not extend the levee around Isle de Jean Charles. Instead, it paid the state to build a new village 20 miles inland and relocate the island’s residents. But, from the very beginning, this program was controversial: while the new community offers bigger houses and more protection from storms, it’s almost an hour from the Gulf of Mexico, depriving the island’s former residents of their livelihoods and traditions as shrimpers and crabbers. When completed, the new district will comprise about 500 houses, plus a community center. 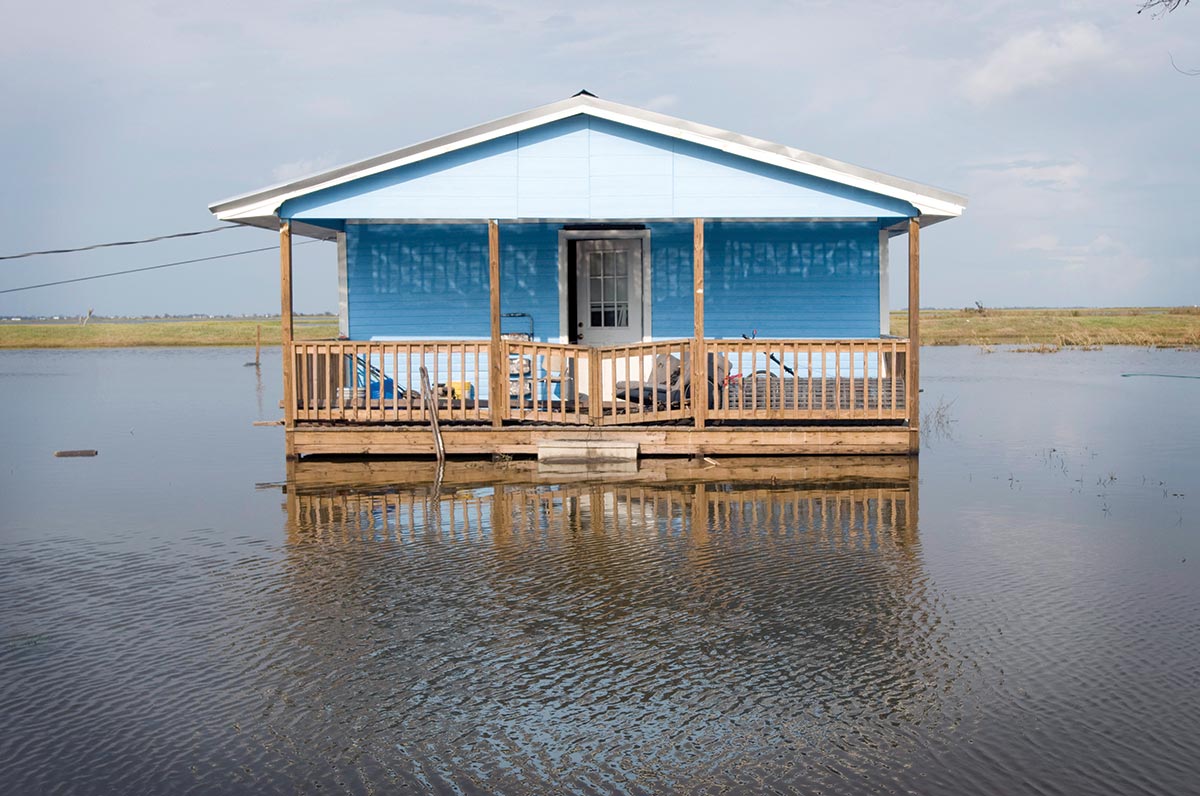 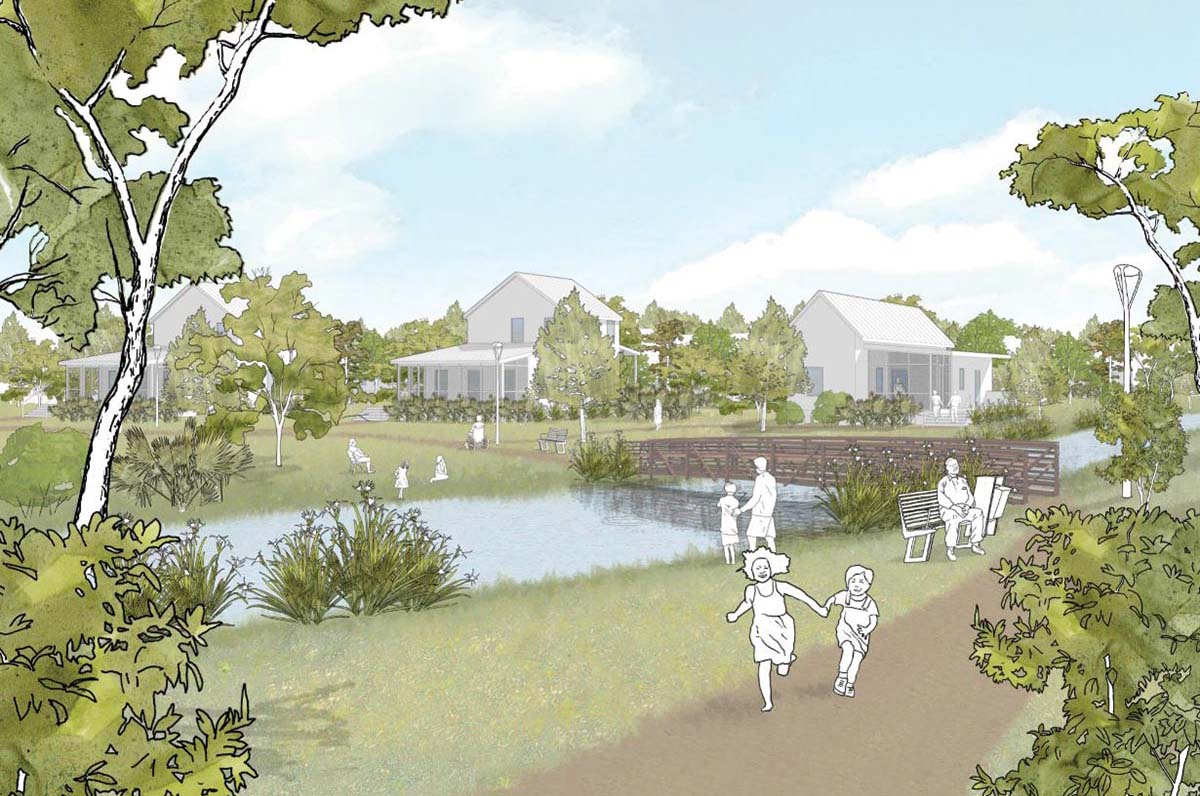 In the wake of flooding that repeatedly overwhelmed Isle de Jean Charles, as it did after Hurricane Gustav in 2008 (3), the state decided to build a new village (4) 20 miles inland. Images © Kael Alford (3), courtesy Louisiana Office of Community Development (4)

Other examples of whole-community retreat include a riverside town in Wisconsin that reinvented itself as a “solar village,” with buildings’ incorporating passive solar strategies; the relocation was a success, but it only involved a few dozen structures. A series of Indigenous communities in Alaska have sought money to move away from eroding shorelines, but their relocation projects have been hampered by funding delays and prolonged negotiations among residents. Even in places where everyone wants to move, it’s difficult to achieve these relocations on a large scale: moving a whole town is far more expensive than buying out individual homeowners, and it requires long-term commitment from an entire community.

In Isle de Jean Charles, no less than on Staten Island, managed retreat provides one permanent solution to a perennial problem—needing to move people out of harm’s way—thus saving the gov­ernment hundreds of millions of dollars in the future. But that doesn’t always make it just. The residents of Oakwood Beach wanted to leave, but many longtime denizens of Isle de Jean Charles wanted to stay on their ancestral island, no matter the cost, and viewed the government’s decision not to extend the levee around them as a manifest injustice.

“You solve part of it by increasing the pot of available money,” says Siders, adding that the government must spend far more on climate adaptation than it currently does. In addition, though, she says the federal government needs to take “a more holistic approach, and increase coordination” between agencies and local community leaders. The decision not to put a wall around Isle de Jean Charles didn’t happen at the same time as the solution to relocate the tribe—but it should have.

For communities on the front lines of climate change, the dilemma of deciding between staying or leaving raises wrenching questions. Who should have the ultimate say about the fate of these places—the federal or local government or those actually under siege by rising waters? What if the residents don’t agree among themselves? Who gets to decide which communities will try to stay? Or disperse? Or move in their entirety?

The answers to these questions are still far from clear, but the questions themselves are not going away.

Jake Bittle was Architectural Record’s 2016 American Society of Magazine Editors (ASME) intern. He is a contributing writer at Grist and a freelance reporter covering climate change, energy, and housing. His book about climate migration, The Great Displacement, is forthcoming from Simon & Schuster.