This website requires certain cookies to work and uses other cookies to help you have the best experience. By visiting this website, certain cookies have already been set, which you may delete and block. By closing this message or continuing to use our site, you agree to the use of cookies. Visit our updated privacy and cookie policy to learn more.
Home » Ryall Sheridan Architects Crafts a Seaside Retreat on Long Island
ProjectsBuildings by TypeResidential ArchitectureHouse of the Month

Rarely has Bill Ryall, of the Manhattan-based firm Ryall Sheridan Architects, had clients more involved in the design process than Michel and Caroline Zaleski. Several years ago, the New York couple commissioned Ryall to replace their weekend home, a 1950s bungalow in Amagansett, Long Island, where they had lived for two decades, with a new beach house.

The Zaleskis came to the project well schooled in architecture. Caroline, a preservationist, wrote Long Island Modernism: 1930–1980, in 2012. Michel, an investor, is the son of a Polish-born architect, Joseph Zaleski, who worked with Le Corbusier in the 1940s, in Paris, and again, in the 1960s, in Cambridge, Massachusetts, when he was the project architect for Le Corbusier’s Carpenter Center for the Visual Arts at Harvard University.

“At our first meeting about the house, Michel handed Bill a sketch of a section,” recalls Caroline. “Michel also came up with the plan, and Bill put it into architecture.” Adds Ryall, “Their knowledge and historical references made the design process collaborative, educational, and a pleasure for everyone.” 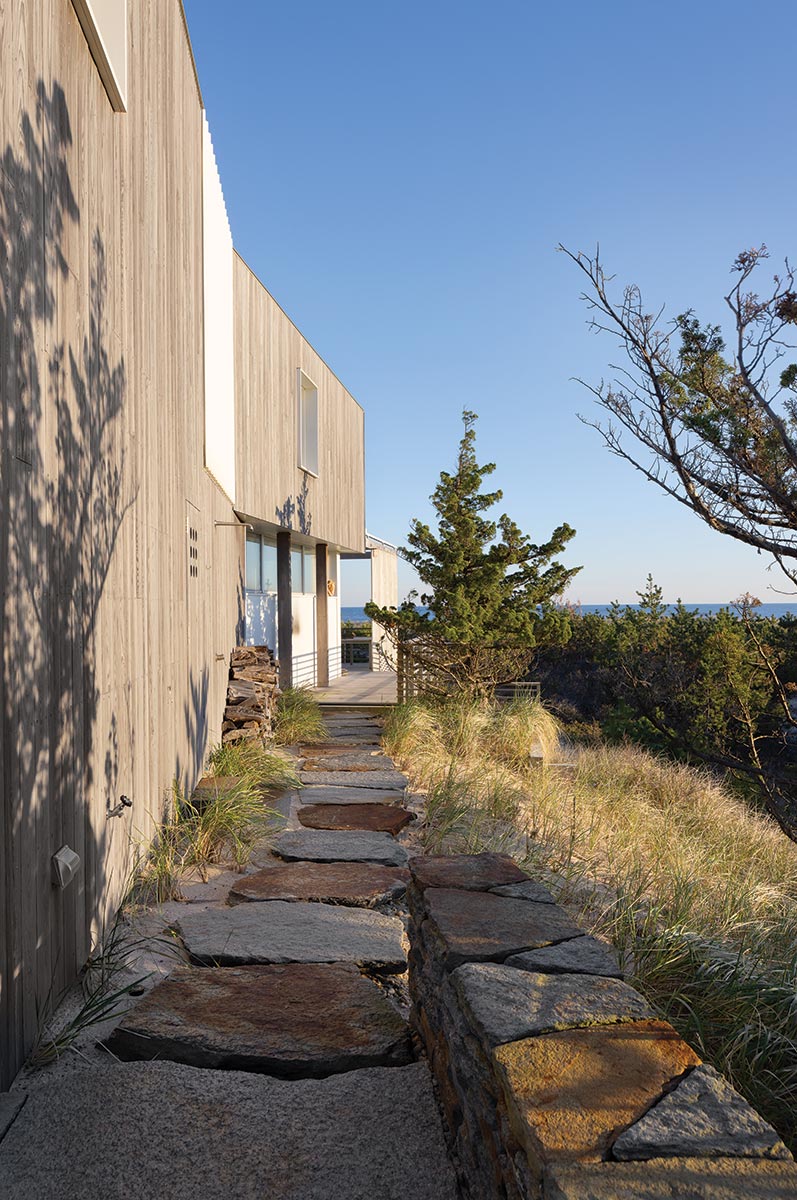 A burnt-cypress rainscreen clads the southwest side of the angled bedroom wing. Photo © Donna Dotan / DD Reps, click to enlarge.

Perched on a high dune on a long, narrow two-acre lot, the cottage occupies an idyllic site overlooking the Atlantic Ocean to the south and Napeague State Park and Gardiner’s Bay to the north. Zoning restrictions required the house to be set back more than 100 feet from the dune crest, and several hundred feet from the ocean’s high-water line. To keep the structure stable in the sandy soil, Ryall and project architect Niall Carroll placed it on wood piles buried 40 feet deep. Because it is in a hurricane zone, the robust structure has a wood and steel frame clad in a burnt-cypress rainscreen. It can withstand 140-mile-an-hour winds.

The 5,000-square-foot house (not including a basement and garage) is loosely V-shaped, with two angled wings, sited to capture views of nature (instead of the neighbors’ properties). The Zaleskis wanted to accommodate three generations of their family while retaining a degree of autonomy for themselves. They occupy the smaller two-story wing, with a main bedroom suite and study upstairs, and a library and study below. The other wing has four bedrooms, a screened porch, and a children’s playroom upstairs, while another bedroom and the large open kitchen and dining room are located downstairs. 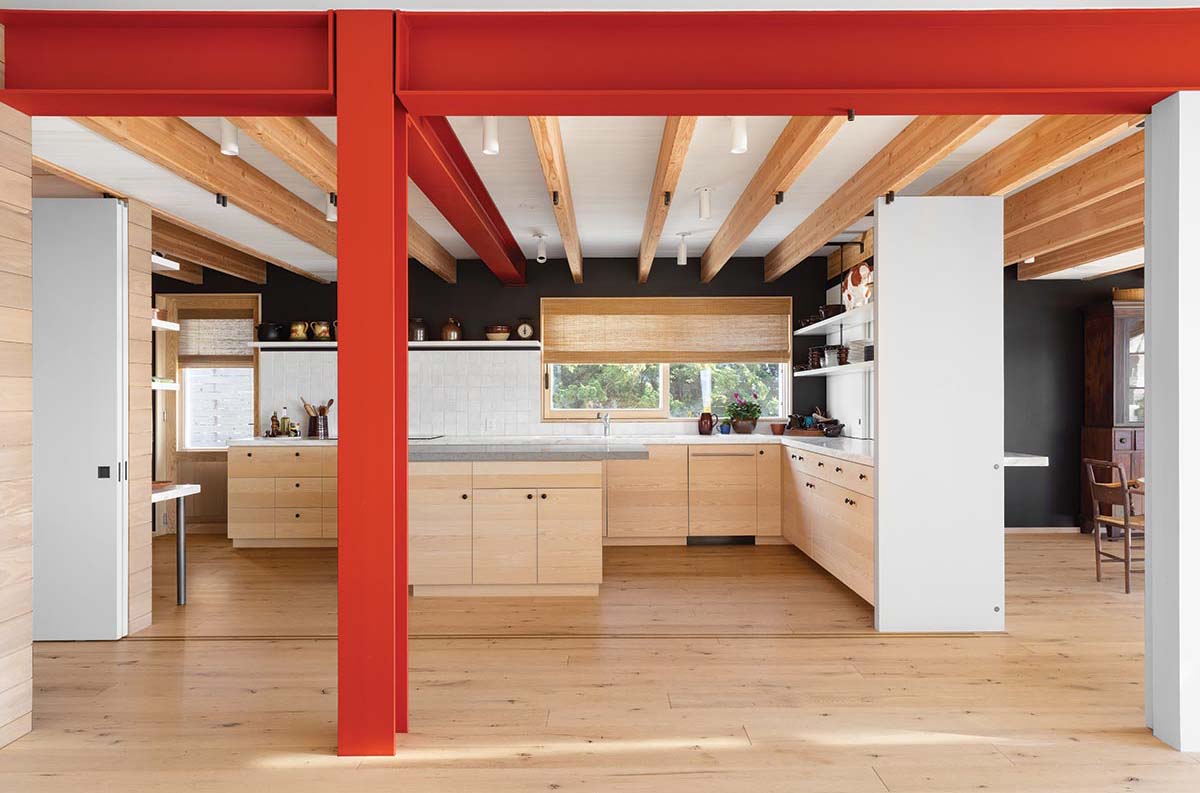 Red paint, like that used by Le Corbusier, highlights the steel framing at the kitchen. Photo © Donna Dotan / DD Reps

A single-story living room connects the two volumes, enclosed on the north and south by expanses of glass. A generous roof deck above the living room looks out toward “1,200 acres of borrowed landscape,” Caroline says, including the Atlantic Ocean straight ahead. Ryall adds that the design team further stabilized the landscape with indigenous dune grasses and other native plants. 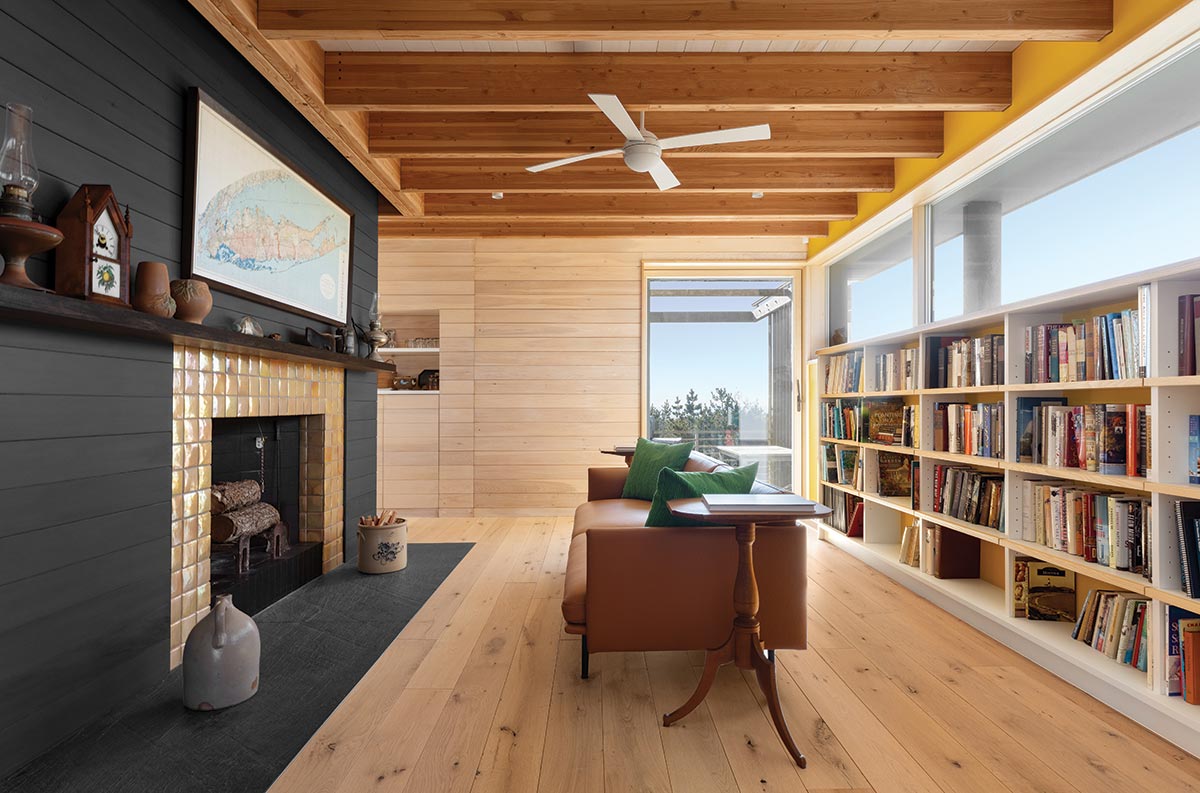 The house, according to the architects, is net zero: it generates all its own power, using electricity as the sole energy source for heating, cooling, hot water, and cooking. Ryall says his office follows Passive House methods of design and construction in most of their projects, as markedly demonstrated here by roof-mounted solar panels and lack of dependence on fossil fuels. “This house is probably one of the most energy-efficient buildings on the East End of Long Island,” he states. Despite sitting on an exposed dune, with all that glass, the year-around retreat has a snug, solid feel inside.

The coziness comes from the prevalence of wood paneling and an eclectic assortment of furnishings: 19th-century American antiques and pottery; iridescent, golden Pewabic tiles on the fireplaces; and classic pieces of modern furniture are surrounded by horizontal-plank pine walls, wide-board oak floors, and jolts of color from Le Corbusier’s original palette (the paint is produced in Zurich) for the red beams, and yellow and burnt umber walls. 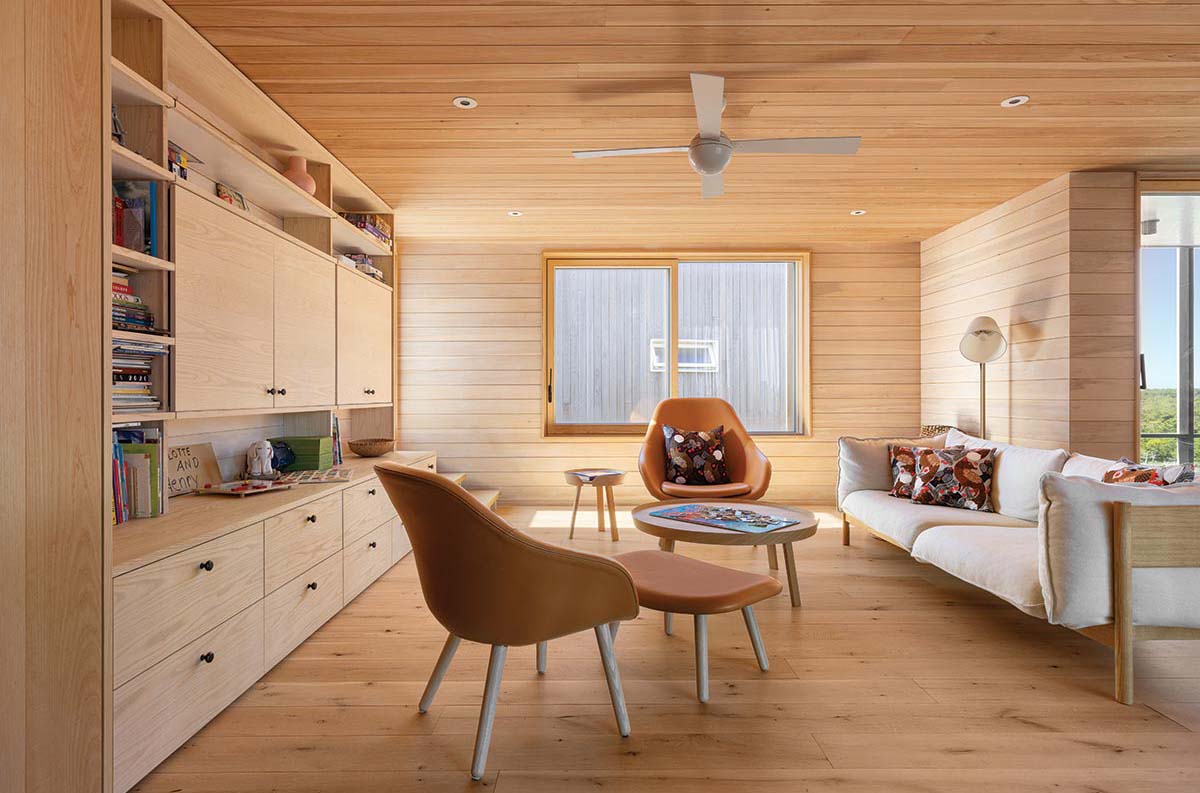 Ryall designed the hardware to reflect the colonial revival period and picked some bathroom tiles from Springfield Pottery in Eng­land, as well as others he had admired in Italy. “The house has a real Arts and Crafts feel to it,” he notes. “I wanted it to reflect the history of the East End. The design fits the site. It is really one of a kind. That’s what you want.” Adds Caroline: “Bill really listened to us.”