Unveiled in 2020, the new 86,000-square-foot Rotes Rathaus (Red Town Hall) is a stop named for the adjacent 1869 Neo-Renaissance seat of Berlin’s state government—a distinctive redbrick building and 243-foot-tall clock tower. The new station is part of an extension of the U5 line, which now provides a direct connection between the city center and its eastern edge.

When excavation began in 2010, the discovery of the foundations of a 13th-century Medieval city hall and 14 houses brought the project to a six-year standstill. “While the city didn’t have the cash for restoration, the site needed to be protected for future work,” explains Edwin Smida, LKL design lead.

In order to celebrate the historic find, Collignon rethought his scheme, inspired by mushroom-shaped columns holding up the vaulted ceiling of the Gothic city hall. The architect sketched out a plan, punctuated by seven such columns sprouting between the two tracks. 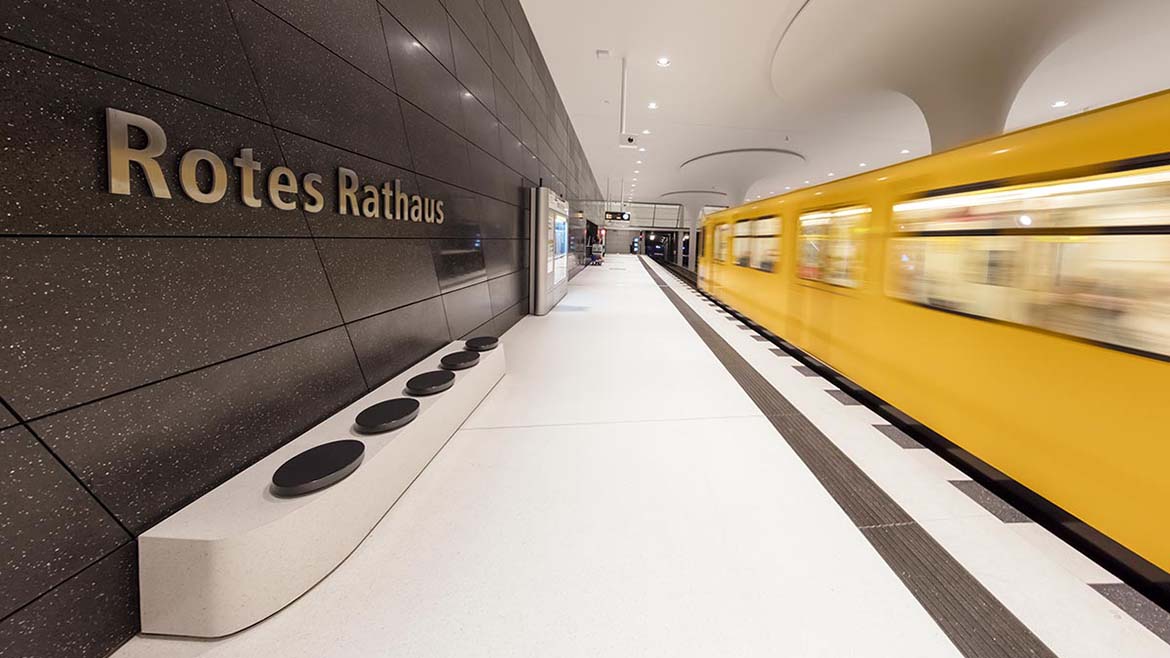 LKL’s initial scheme using light coves was quickly discarded. “We realized that a fixture wrapping each column would be too graphic, and rob the architecture of its authentic character,” says Smida. Instead, a single row of downlights, integrated into the concrete ceiling on either side of the mushroom columns ensures that the 460-foot-long platforms are kept uniformly bright. Each luminaire imparts a warm-white 3000-Kelvin glow via symmetrical medium-beam light distribution. “They might not appear special,” says Smidaj. “But you’ll rarely find downlights in a metro station.” 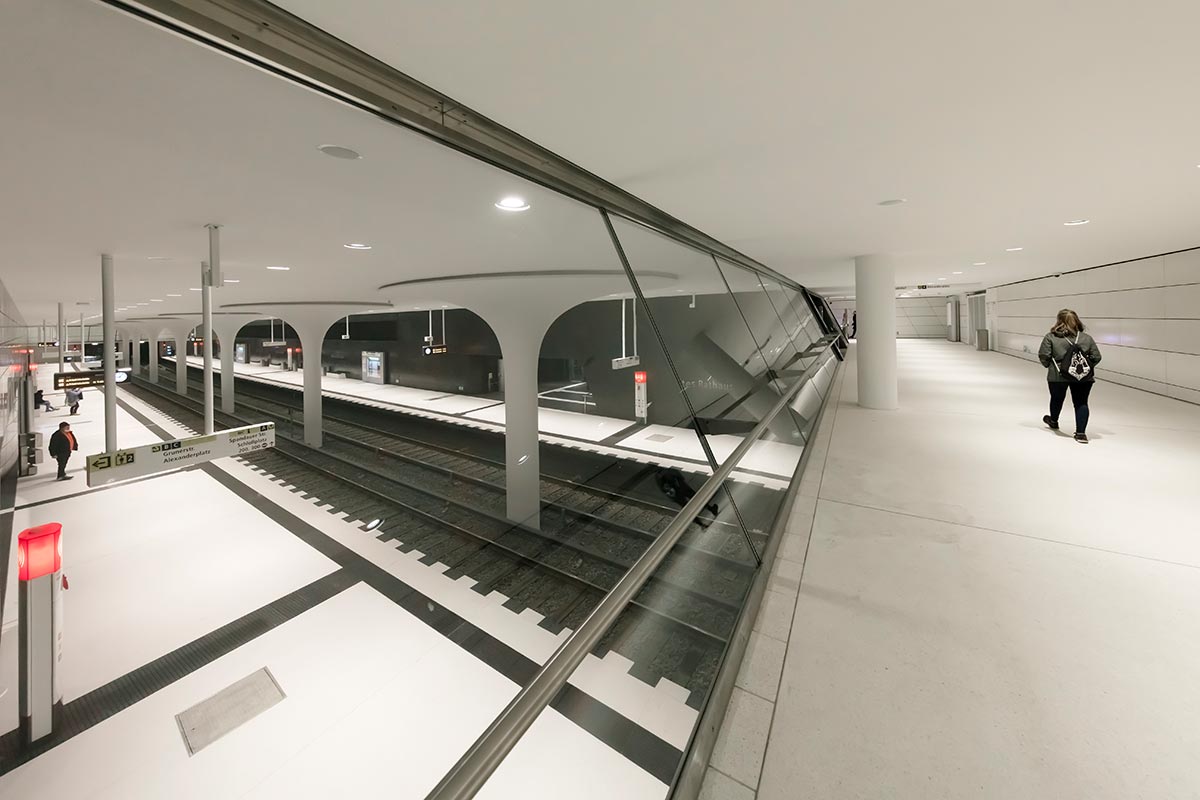 The LKL team also specified the reflective quality of the platform’s pale gray terrazzo floor, aiming the recessed fixtures so their light bounces off its surface. Polished concrete walls with a slight sparkle and nonslip in-ground luminaires at the ends of each platform add to the overall glow of the place.

Two entrance galleries overlook the platforms, each with glass walls that offer views of the trains—and architecture. LKL balanced the lighting in these corridors with the same recessed fixtures and optics. The 3000-Kelvin color temperature continues as well, extending to the anthracite-hued vertical passage­ways, where additional downlights and LED tubes illuminate the escalators and stairs. 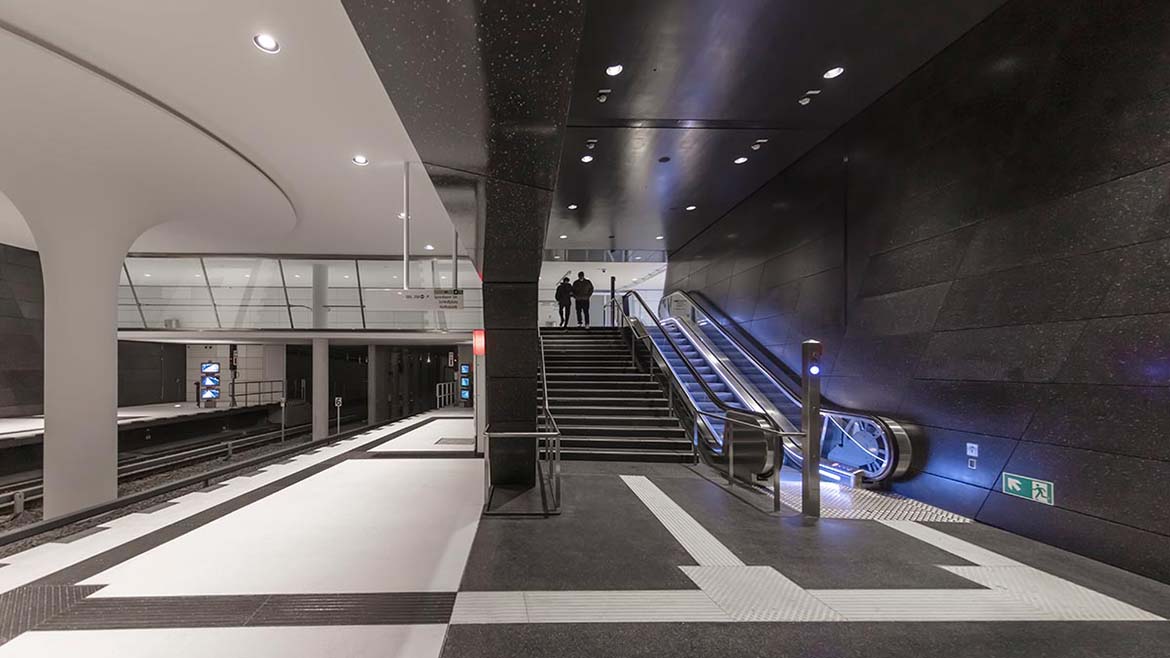 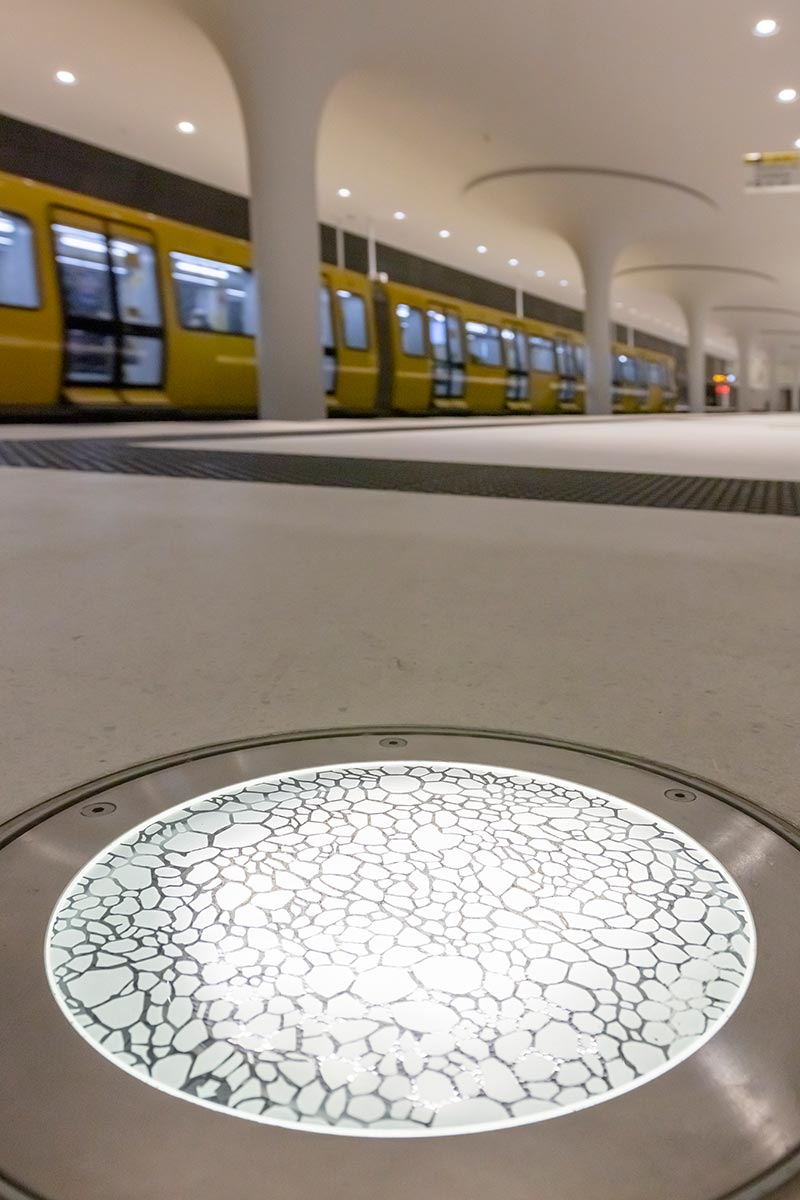 The recessed metal housing for the downlights was designed and installed into the concrete at an early phase—a strategy that prompted the use of LEDs instead of the then-government-issued metal halide lamps. While LEDs promised energy savings and longevity, the lighting designers also knew from experience that investing in state-of-the-art technology would minimize maintenance over time. “The housings designed in 2010 were ready for the lighting delivered 10 years later,” Smida notes.

Standing on the Rotes Rathaus platform within its pleasing glow, one might not notice the subtlety of its clean, crisp design. But there is a sense of serenity here—­one that’s maintained as you board the next train—and that’s a rare feeling for a busy transit system.

Back to Below the Surface Lighting Projects

Berlin-based Mairi Beautyman has been writing about design since 2001.