At Its Studio, AHMM Sheds Light Into a Deep, Bunker-Like Space

When the architecture firm Allford Hall Monaghan Morris (AHMM) was looking for a second studio near its London base, it found an irresistible opportunity at White Collar Factory, a 16-story office tower designed by the practice. Its cavernous basement, which extends under an adjacent courtyard, was never intended as a workspace but had a powerful, robust character, room for a staff of 110, and lots of potential. There was only one catch: “It had everything we like in a building,” says practice partner Simon All­ford, “except windows.”

The lack of daylight and views has been addressed by a sophisticated lighting scheme that also supports AHMM’s vision of the studio as its “skunkworks”—a flexible setting for creative experiment—and chimes with the building’s industrial aesthetic.

Leaving the raw concrete shell exposed, the architects inserted steel mezzanines on two sides of the 26-foot-high space, linked by a bridge over the reception area, where a glazed elevator shaft provides a modicum of borrowed daylight. Under one mezzanine, painted concrete-block walls separate open-fronted bays. Below the other mezzanine, meeting rooms are constructed from a modular demountable plywood wall system, originally designed by AHMM for Google’s London headquarters. 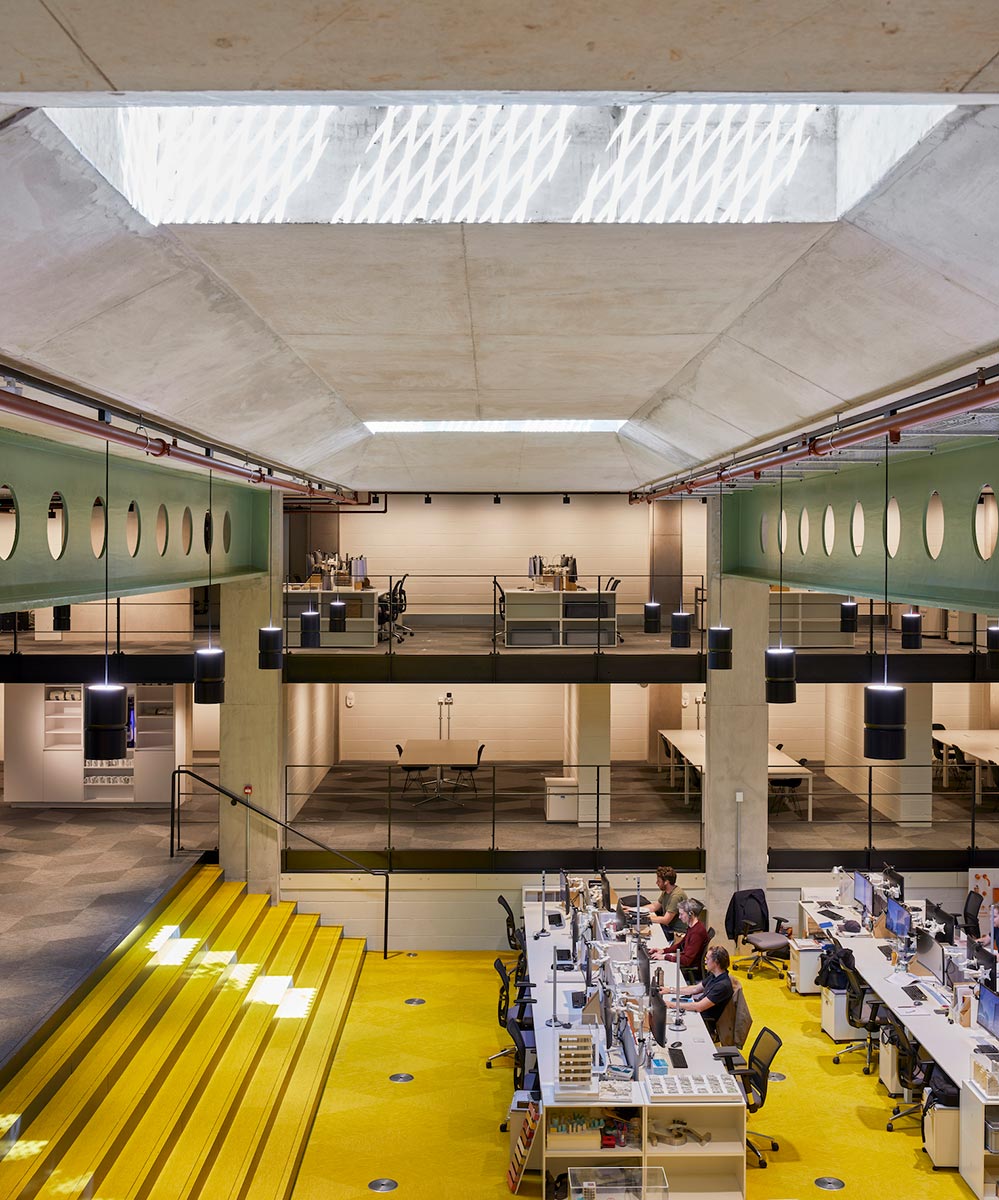 In the middle, where the floor-level drops and four small skylights puncture the vaulted concrete ceiling, a generous double-height studio hums with activity. Overhead, a regular array of can-shaped pendants hangs between castellated steel beams, distinct in pistachio green. Designed for use in areas with high ceilings, the matte-black cylinders have a high lumen output from both ends. With strong light bouncing off the pale ceiling and a cornflower yellow carpet, the whole studio glows.

The skylights above the central space create an important connection to the outside world and some daylight—“even a tiny bit is vital,” says Allford—but not enough to regulate its occupants’ circadian rhythms, the 24-hour internal clock essential to healthy sleep and general well-being. To compensate, the quality of electric light adjusts to create natural-seeming variations: cool white in the early morning, brightening toward the middle of the day, and warming in the afternoon. The evolution is imperceptible, but, when the cycle is sped up, the change in ambience is striking. 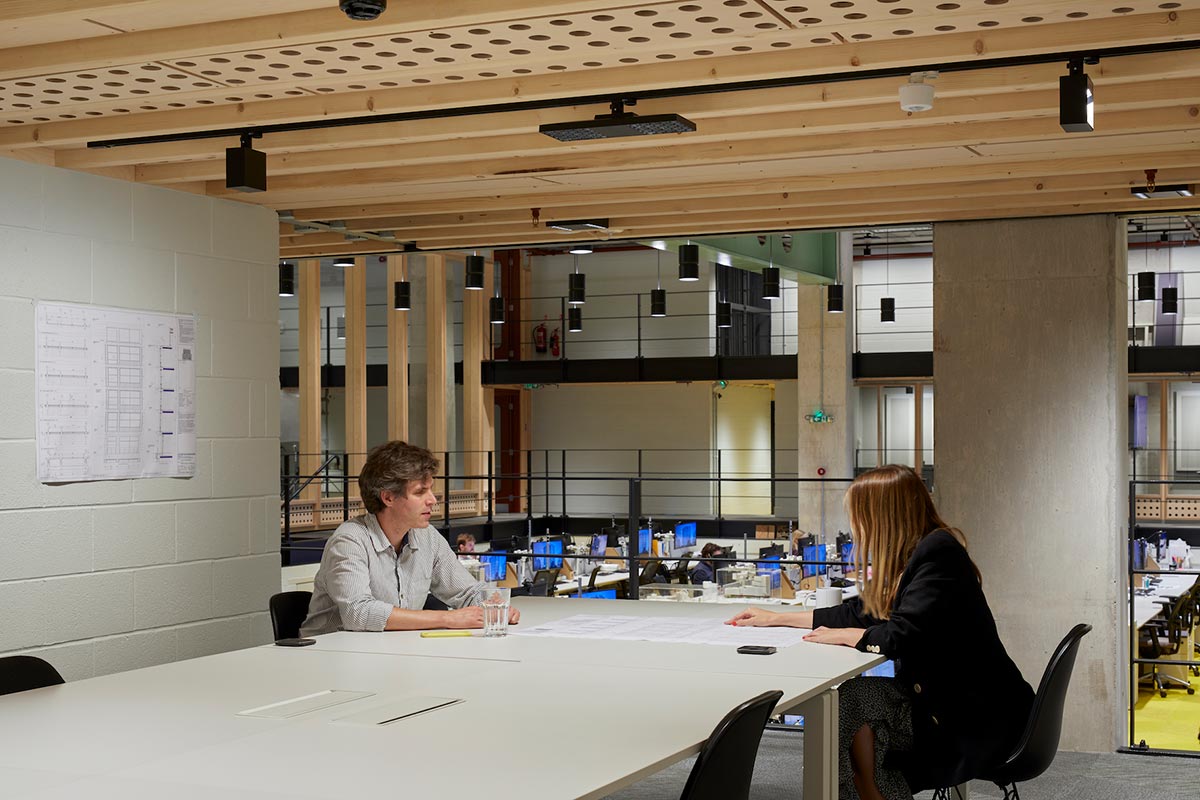 That demonstration is one of dozens of scenes available at the touch of a button. The whole installation is controlled via Bluetooth from an app on a phone and tablet, so it can be managed from anywhere in the building and beyond.

The behavior of individual fixtures can be altered to support alternative desk configurations, or to suit the preferences of someone seated below. “London offices provide a standard 200 lux at desk level,” says Allford—“a kind of uniformity nobody actually wants.” There’s potential for dramatic effects too. Allford had in mind Eero Saarinen’s trick of taking clients into a darkened room and turning on a single light over a model. “There is theater in the presentation of architecture,” he says, “and lighting adds to the story.”

Adaptability was most important in the peripheral zones, where the intention was to make something akin to MIT’s demolished Building 20, a temporary structure built during World War II that inhabitants felt free to modify, liberating their creative work. One mezzanine is currently an incubator, allowing in a few fledgling architecture practices. Another might become a model shop. Track lighting was chosen to permit change of use in the time it takes to relocate a fixture or to plug in a new one. “It’s an expensive option,” says Allford, “but you can reinvent the character of spaces without replacing finishes.”

For these low-ceilinged areas, AHMM selected downlights with a shallow housing and wide beams. Anti-dazzle louvers disguise the source of light so that attention is focused on its effect. Track-mounted wall-washers enhance the apparent brightness of the room, since we register the illumination of vertical surfaces more strongly than light on a horizontal plane. The sunny sheen on blockwork partitions below the mezzanine is particularly effective, seeming to imply a source of daylight somewhere out of sight. Real windows might have been ideal, but, walking around the atmospheric basement brought to life by light, I didn’t miss them at all.

Back to Below the Surface Lighting Projects