On Thursday, March 31, over 275 industry leaders and professionals gathered at Grace Farms in New Canaan, Connecticut for the inaugural “Design for Freedom Summit,” part of a multi-pronged effort to address the crisis of forced labor within the architectural, engineering, and construction industries.

The focal point of the non-profit institute's bucolic, 80-acre campus is the SANAA-designed “River” building, which undulates across the gentle slopes of the surrounding landscape. In 2019, four years after the building’s opening, the Grace Farms Foundation asked the building’s general contractor, Sciame Construction, to undertake an experiment in supply-chain deep diving by tracing the origin of the materials used to fabricate the distinctive 60,000 square-foot roof.

During construction, Sciame had worked with Kansas City-based architectural metalworks specialists Zahner Inc. on the various components of the roof system. Zahner had sourced the raw and manufactured materials from suppliers spread across the U.S. For this exercise, Sciame contacted these suppliers one by one, moving as far back in the supply chain as was possible, but the original sources of most of the building materials could not be confirmed. 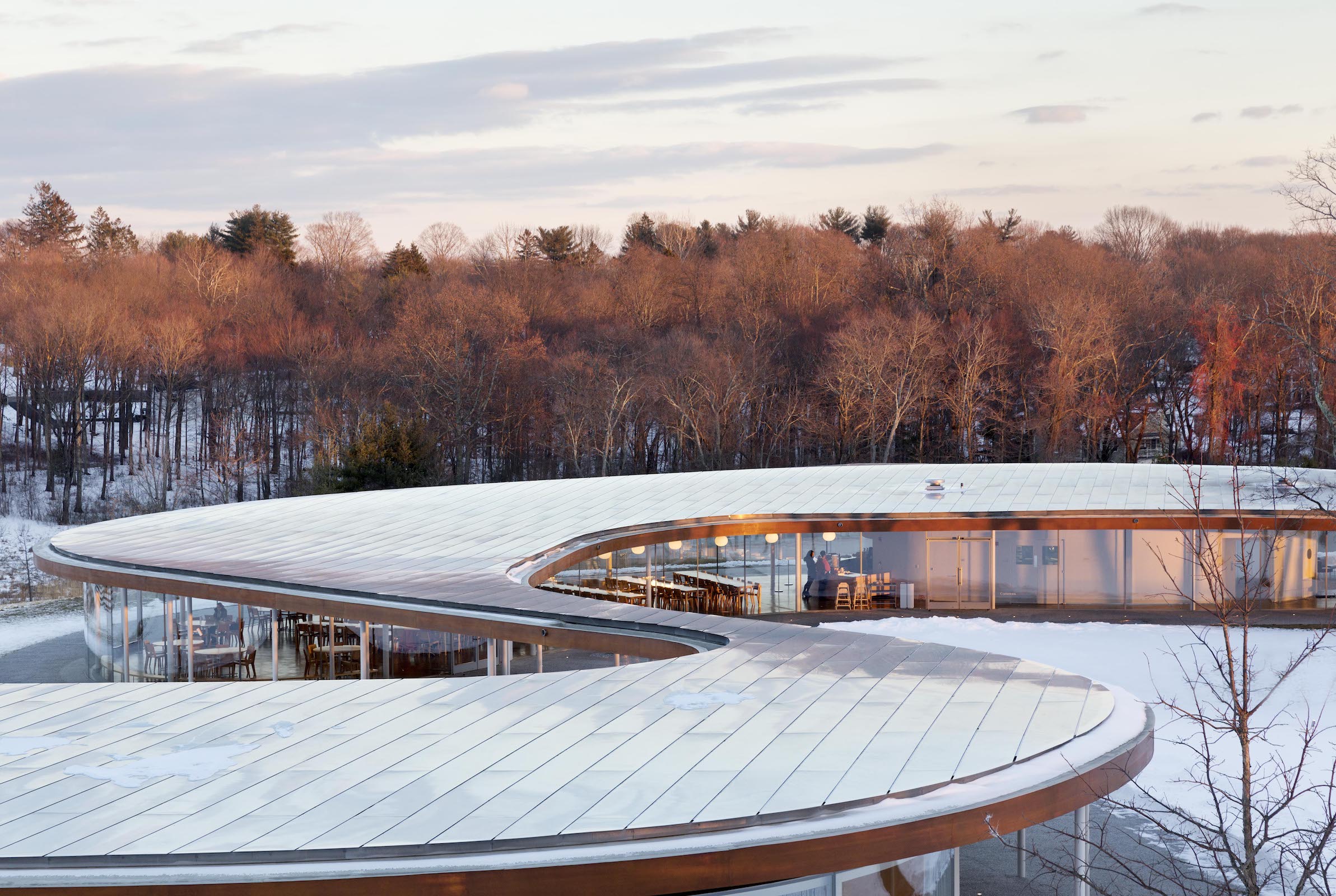 The troubling implication of the global building materials supply chain’s opacity is the invisible and pervasive network of modern slavery that props it up. On any given day, according to a 2016 World Bank Report, 25 million people are trapped in situations of forced labor and 125 million children are subjected to unethical labor practices. The International Labour Organization reports that the construction industry has the highest risk of forced labor out of any industrial sector in the world.

In light of these facts, Sharon Prince, Grace Farms CEO, and the late Bill Menking, founding Editor-in-Chief of the Architect’s Newspaper, launched Design for Freedom (DFF) in 2017 to address the building industry’s relative inaction vis a vis the systemic presence of modern slavery. Since then, the initiative has focused on raising awareness of the issue and urging industry leaders to join the DFF Working Group, which now boasts a membership of over 60 industry leaders and experts. In October 2020, the group released the Design for Freedom Report, a comprehensive 96-page document laying out the role of forced labor within the AEC industries, featuring contributions by AIA New York and architecture firms FXCollaborative, Gensler, MASS Design Group, SHoP, SO-IL, and WXY among others. 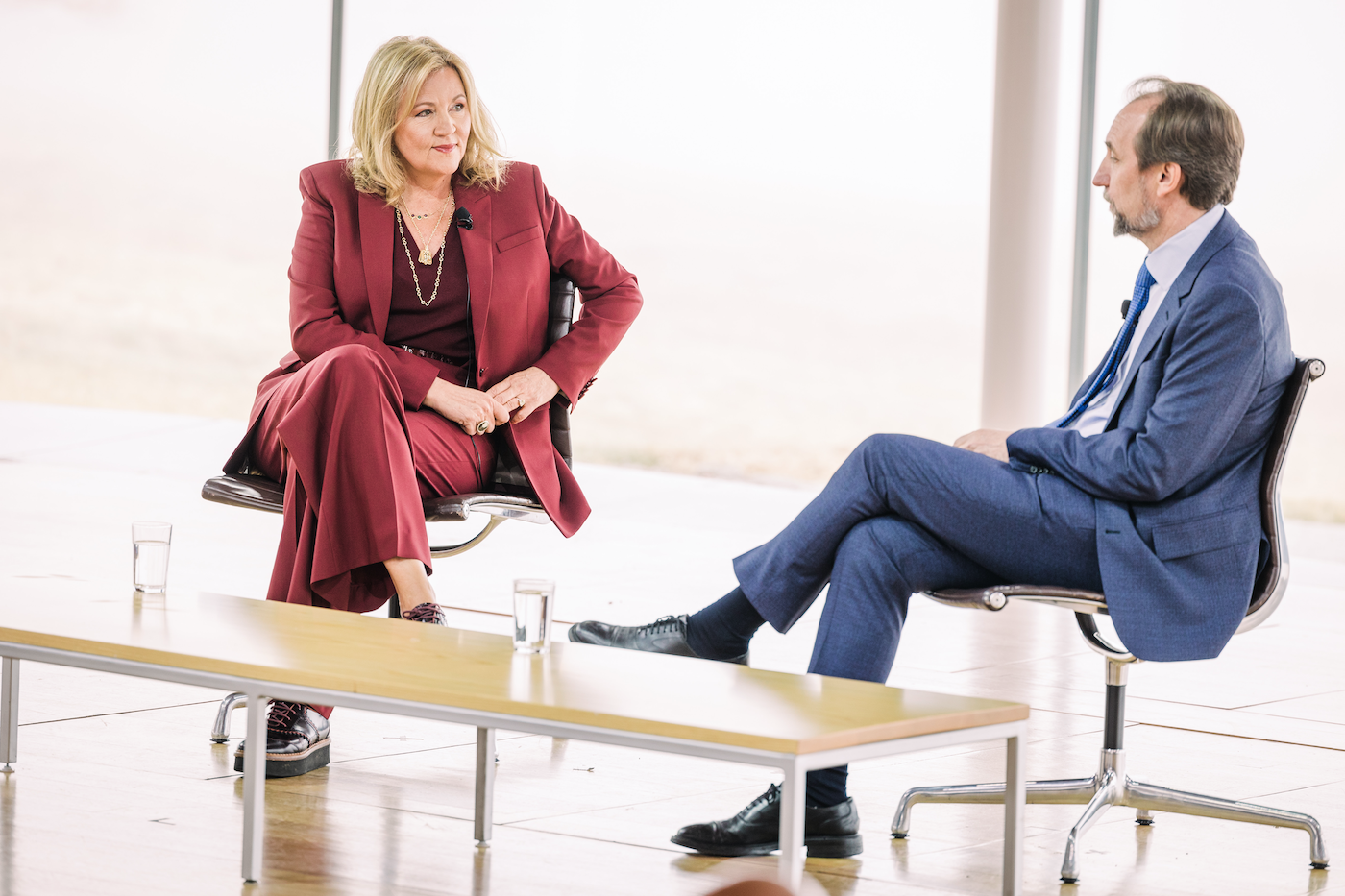 With a series of panels, the day-long conference covered the topics of corporate responsibility, ethical material procurement, and government policy and enforcement. These were supplemented by lunchtime roundtables and two “tech talks” about the future of the industry led by SHoP principal Christopher Sharples and the director of Yale’s Center for Ecosystems in Architecture program, Anna Dyson.

The first panel, on corporate ethical responsibility, included Jane Abernathy of office furnishings company Humanscale and Vanessa Barboni Hallik of ethical apparel company Another Tomorrow. The two spoke to the tremendous cultural shift that has occurred in soft goods in recent years–where companies have begun to successfully drive consumer demand for clothing and furnishings made from ethically sourced textiles. As to why such a shift has been even slower to materialize in architecture can be attributed in part to the aggregated nature of the building industry; the complex nature of the supply chain makes it difficult to hold bad actors accountable, and its global nature complicates the efficacy of oversight institutions.

Attorney Jennifer McCadney noted how exposés and public outrage have driven paradigm shifts in other sectors, citing the Washington Post’s reporting of exploitation in the cocoa and palm oil industries. Panelists agreed that consumer pressure and demand for ethical products has historically been the most effective way to drive change in the market.

Rick Cook of COOKFOX Architects began the second panel on ethical sourcing by presenting a piece of timber structure salvaged from an 1891 warehouse. The tree which it was made from started growing in the 16th century, he said. Using the artifact as a demonstration of material history, he spoke about expanding the definition of sustainability to include not just ecological costs, but human costs. “Every material has a sustainable consciousness,” said panelist Annie Bevan, CEO of Mindful Materials, a collaborative that is compiling a product certification library for AEC professionals to use for identifying and sourcing sustainable materials.

A number of DFF pilot projects were introduced in this panel, including the 2022 Serpentine Pavilion "Black Chapel" designed by Theaster Gates, “Shadow of a Face,” a monument of Harriet Tubman by Nina Cooke John, and the New Canaan Library. Design for Freedom will advise on all projects to ensure the ethical sourcing of materials. Grace Farms Creative Director Chelsea Thatcher also announced DFF’s first project in Asia, a center for arts and culture in New Dehli.

The Summit marked the release of the “Design for Freedom Toolkit,” a comprehensive resource that architects and design professionals can use to “implement ethical, forced labor-free material sourcing strategies into their own practices.” The toolkit, which can be downloaded from the Grace Farms website, offers information on “high-risk” materials such as timber, steel, and rubber, and outlines steps that can be taken to reduce or eliminate the risk of forced labor in design decisions.

In the third panel, which aimed to “explore how federal policies and regulatory frameworks can work to curb forced labor and improve supply chain traceability,” more attention was given to the role of law enforcement and the impact of U.S. overseas building contracts than legislation and policy. However, Christine Foushee and Angel A. Dizon, representatives of the U.S. Bureau of Overseas Building Operations, used the panel to announce the State Department’s commitment to DFF, though it has yet to select a pilot project. An audience member asked if the U.S. General Services Administration, the agency that oversees domestic federal building projects, would also commit to DFF, with Foushee answering in the vague affirmative.

In recent years, several scandals have forced the architectural world to grapple with unethical labor on construction sites. The late architect Zaha Hadid’s comments on the deaths of migrant workers on the construction site of World Cup Village in Qatar (for which she designed the al-Wakrah Stadium) prompted architects to look more closely at their culpability in global patterns of exploitation: "I have nothing to do with the workers," she told The Guardian in 2014, “It’s not my duty as an architect.” But this is only part of the problem. As DFF points out, architectural work is even more divorced from the sordid business of raw materials extraction and product manufacturing.

The forced labor and human trafficking industry is vast, with an estimated value of $150 billion among all industrial sectors, and will be no small feat to dismantle. However, the demonstrated commitment of a range of AEC professionals to Design for Freedom, and the success of initiatives in other industries, offers a path forward.

Grace Farms Sets Date for Opening of its SANAA-Designed Complex

SCI-Arc Faces a Reckoning Amid Allegations of Faculty Misconduct