On the banks of the Rhine River, in Basel, the doughnut-shaped Novartis Pavilion by Milan-based architecture firm AMDL CIRCLE is enveloped by a media facade that puts on dramatic displays while generating close to half the building’s energy needs. Opened in May, the 11,975-square-foot building is the first publicly accessible site on the pharmaceutical company’s larger campus, and will serve as an exhibition, meeting, and events center. The facade’s photovoltaic panels are translucent and suspended from a frame 2 feet in front of the exterior, allowing light from the bidirectional LEDs embedded within to reflect off the building’s metal inner shell and create dynamic visual effects. 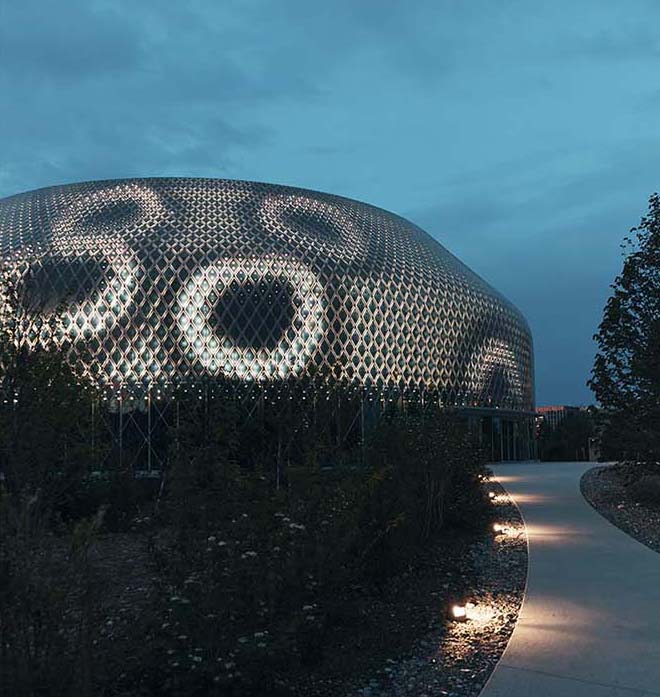 “We came up with the idea of creating this ‘media skin’ to be a communicative surface,” says project architect Nicholas Bewick. The rhomboid panels let the system flex seamlessly around the building’s curved exterior, with natural light permeating the extensive glazing on the ground level. For a short time each evening, the facade comes to life with light installations by three international artists who were inspired by the patterns and colors of molecules. At other times, the LEDs can be programmed to project any number of patterns or text. “It’s not an advertising billboard for the company,” says Bewick. “It acts as an expression of the relationship between art and science.”