“The whole densification discussion has been a hot topic here for quite some time now,” says Simon Frommenwiler of Basel-based architects Herlach, Hartmann, Frommenwiler (HHF), a 2010 Design Vanguard firm. “Basel continues to attract a skilled foreign workforce, but Swiss law forbids building on greenfield sites. Towers are disliked and generally prohibited by local planning rules. So how do you accommodate the population increase?” With this 15-unit housing project, located in the city’s St. Johann neighborhood, HHF sought to provide a possible answer. “You have this huge urban block that’s lined with apartment buildings around its perimeter, but is far emptier at its heart,” explains Frommenwiler. “Even with the legal requirement that only 50 percent of the site can be built upon, there’s huge potential to densify in the middle.” The six-story residence (1) is independent of the perimeter buildings that surround it (top), though in some areas gets quite close to auxiliary structures and party walls (2). Photo © Laurian Ghinitoiu, click to enlarge. To unlock that potential, the various owners of the separate plots had to be brought on board. HHF was already in contact with one of them—a foundation that used the courtyard space behind its building for parking—and, after convincing it that the project was viable, began the long process of negotiating with the others. In the end, the owners of two other plots agreed to build the project jointly with the foundation. Since none had any development expertise, they gave HHF carte blanche to define the typologies and come up with a suitable design, which they eventually sold to Steiner, a developer-contractor. “To be honest, I’m still amazed we pulled it off,” says Frommenwiler of the nine-year process. Keen to see where the experiment might lead, the city supported the project throughout.

Given the 79 official letters of opposition it generated from the neighbors (just two fewer than Herzog & de Meuron’s first Roche skyscraper in the city, Frommenwiler likes to point out), the Landskronhof scheme had every interest in being discreet. This is one reason it is concentrated at the center of the site, pulling away from neighboring buildings as it rises to allow enough daylight to penetrate to grade. “Initially, we imagined building lots of houses with a footprint of just one room,” says Frommenwiler, “but we soon realized that wouldn’t be financially sustainable. Instead, we thought, ‘Let’s be superefficient and have just one staircase/elevator tower to which all the units are attached.’ ” Pinwheeling around the core, the apartments decrease in number as the floors go up, forming an irregular pyramid. Each home enjoys generous outdoor spaces—gardens at the two grade levels (the site rises to the northwest) and terraces above, sometimes more than one per apartment—resulting in a sort of six-story piling up of single-family houses. The lower of the groundfloor entrances, to the east, is one of two ways of accessing the building. Photo © Laurian Ghinitoiu

There are two entry points to both the site and the building: the foundation’s parking entrance leads to the lower ground floor, where a generous porch covers both pedestrian and car access (parking is in the basement), while, to the northwest, to allow pedestrians a way into the upper ground floor, HHF opened up an existing porte cochere that had been closed off for storage. The complexity of the urban situation is matched by HHF’s complex planning: containing between one and four bedrooms, no two apartments are alike, and a number of them are organized as cascading duplexes. Given the proximity of blind party walls at the lower levels, HHF went to great lengths to ensure adequate natural light, with generous glazing and ceiling heights, multiple aspects, and a studied play of long diagonal views inside. Visiting on a dull rainy day, all the apartments were plentifully lit. In contrast to the planning, the construction aimed for maximum simplicity: the bare necessary amount of concrete for the slab-and-post frame (columns and hallway stairs were prefabricated), with non-loadbearing internal and external walls in brick or concrete, faced outside with white-painted wood to achieve a “light pavilion feel,” as Frommenwiler describes it. Window units are off-the-shelf, while the building envelope’s edges are blurred, thanks to the addition of vertical white-painted steel poles attached to the floor overhangs, with terrace and balcony railings fixed to them to form a scaffolding-like trellis that the architects imagine one day covered with climbing plants. Balconies, which widen out at strategic points in front of windows and link up with the terraces, run round the entire building with no barriers between properties, just as there is no fencing in the gardens. As one homeowner explains, “Everyone living here agreed that children should be able to run around the entire building at every level. There are currently 12 kids; the oldest is 10. They just bang on the window when they want to play.” In this respect, the project recalls the spirit of the well-known Davidsboden cooperative housing (Erny, Gramelsbacher, and Schneider, 1989–92) just a block away. Children are able to run around the building on every level. Photo © Laurian Ghinitoiu

Free of traffic and danger, Landskronhof is indeed a children’s paradise, and there’s even a generous sandbox for them in the lower-ground landscaping. Living in such close proximity to other people’s offspring, not to mention enduring close diagonal views into adjacent apartments (there are sun blinds for those requiring privacy), might be a challenge outside the context of Switzerland, where neighborliness is often raised to an art form. And it no doubt helps that higher-income families bought the units, paying around $1,137 per square foot—a price that is slightly below average for what is not a cheap area—to live in generously proportioned properties. “It’s amazing to have a 2,000-square-foot garden in the heart of the city. Who has that?” exclaims another owner, underlining the fact that most families are forced into the suburbs to find this kind of accommodation. Because of this, the city loses most of its middle-class taxpayers to neighboring cantons—another reason the authorities were so keen to see this intelligent, unpretentious scheme succeed. 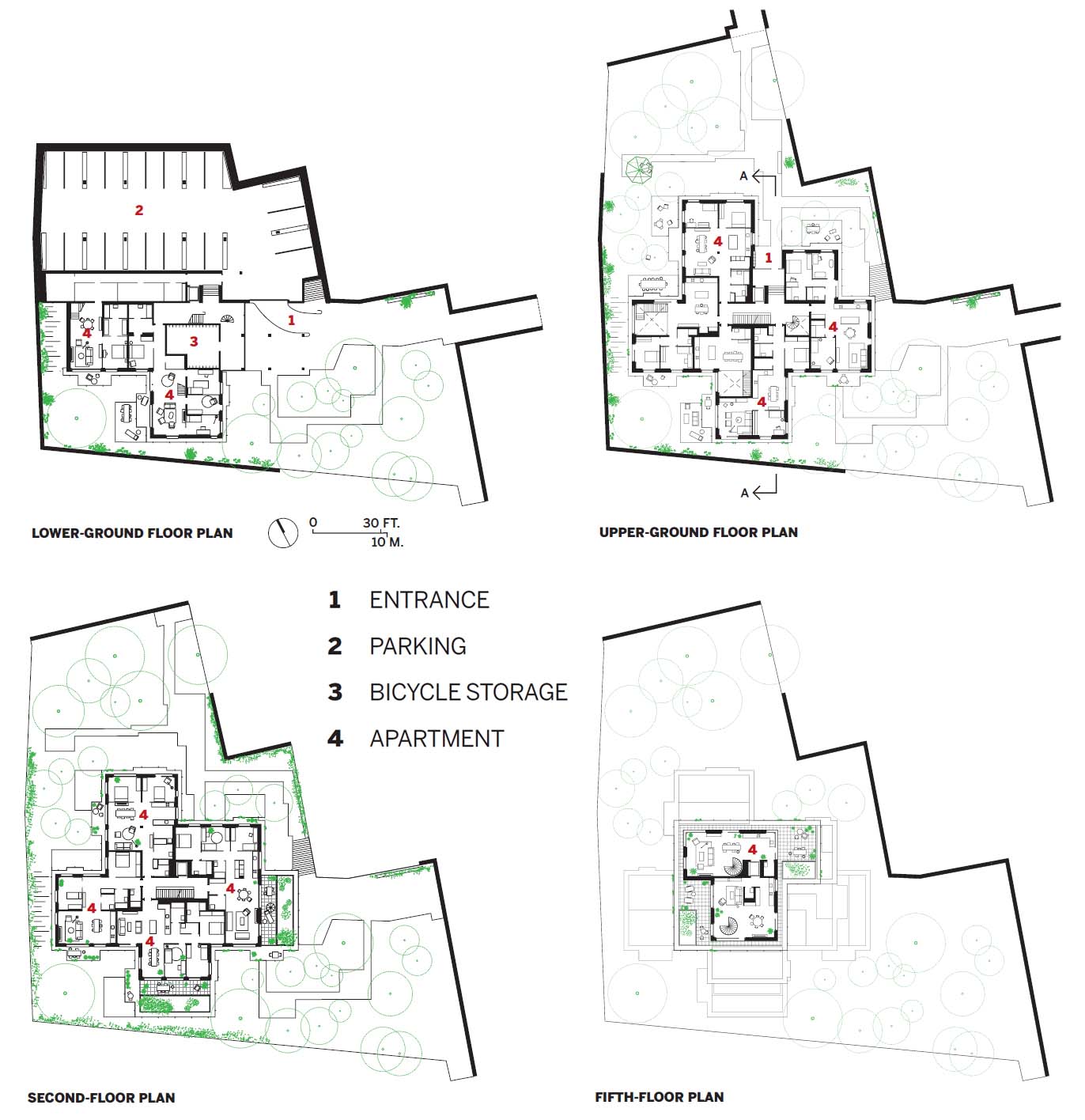