At Montauk Sofa's Montreal Showroom, A Challenge to the Conventions of Preservation

Architects often treat historic preservation as one enterprise and contemporary design as another. Old things should look old, the thinking goes, and new things should look new. But at the Montauk Sofa furniture showroom in Montreal, the family-run Winnipeg- and Montreal-based firm of Cohlmeyer Architecture has quietly blurred the lines between old and new, creating a work of architecture that will satisfy neither ardent preservationists nor fans of sleek contemporary design—and is all the better for it. Built entirely within the shell of a 1940s-era factory along bustling Boulevard Saint-Laurent, the 17,000-square-foot showroom beckons visitors through a choreographed sequence of spaces—some newly built, some renovated, some preserved—that together turn a thoroughly ordinary building into a rich composition of layered histories. A landscaped area has been created in front of a new glass wall (above), allowing for views of greenery from the interiors (top). Photo © Nanne Springer, click to enlarge.

In choosing not to restore the building to its original appearance, the father-son team of Stephen and Daniel Cohlmeyer perhaps unintentionally followed the teachings of the 19th-century architect Eugène Emmanuel Viollet-le-Duc, who described restoration as bringing a historic building to “a condition of completeness which could never have existed at any given time.” For this run-of-the-mill commercial structure, which over the decades has been modified to house countless stores, restaurants, and offices—as well as at least one strip club—returning the building to any of its past appearances would be to miss the point entirely. Its history of being made and remade is precisely why it is interesting, and it is this history that forms the basis of, and in some ways the subject of, its reimagining. The facade remains as a screen sheltering the garden. Photo © Nanne Springer

With the support of Montauk’s Tim Zyto and Danny Chartier, Steve Cohlmeyer proposed a radical intervention. Immediately behind the street-facing facade, a substantial chunk of the building was demolished, creating a 30-foot-deep outdoor garden—an expansion of Montreal’s public realm undertaken not to satisfy city requirements but to enhance the environment around the showroom and bring light into the 145-foot-deep lot. Now the facade—just a 1-foot-thick screen, refaced in brick—remains as a kind of architectural sculpture, a ruin-like gateway sheltering the green oasis within. On the ground floor, the former entrance has been replaced with a folding gate that is stowed during the day, allowing the public in; above, industrial window casing frames views of a sleek glass wall at the back of the garden.

Sawtooth ceilings at the front of the showroom reflect the irregular placement of existing beams and accommodate mechanical systems. Photo © Nanne Springer

Beyond the threshold, a granite pathway meanders past a rich variety of plantings including birch and ironwood trees, and a hidden fountain fills the garden with sound. To the left stands a steel egress stair providing direct access to the second floor—a practical reference to the exterior fire stairs found across Montreal. “As you discover the vegetation and hear the sound of the water, you go into this very calm, very tranquil space,” says landscape architect Myke Hodgins of the firm Heta, and, indeed, the lush garden marks a sharp contrast with the flat hardscape and commotion of the street. The only thing missing is seating, though Zyto says that some may be added in the future.

A narrow trench spanned by a translucent glass bridge links the garden to the showroom entrance. This trench, into which the fountain’s waterfall tumbles, marks the final boundary between the calm world of Montauk Sofa and the lively city, and, more practically, brings light and views of greenery into the basement. On the main and upper floors, too, the garden becomes a central feature of the interiors: the open showrooms are defined by groupings of Montauk’s contemporary furniture set against a serene backdrop of swaying trees. 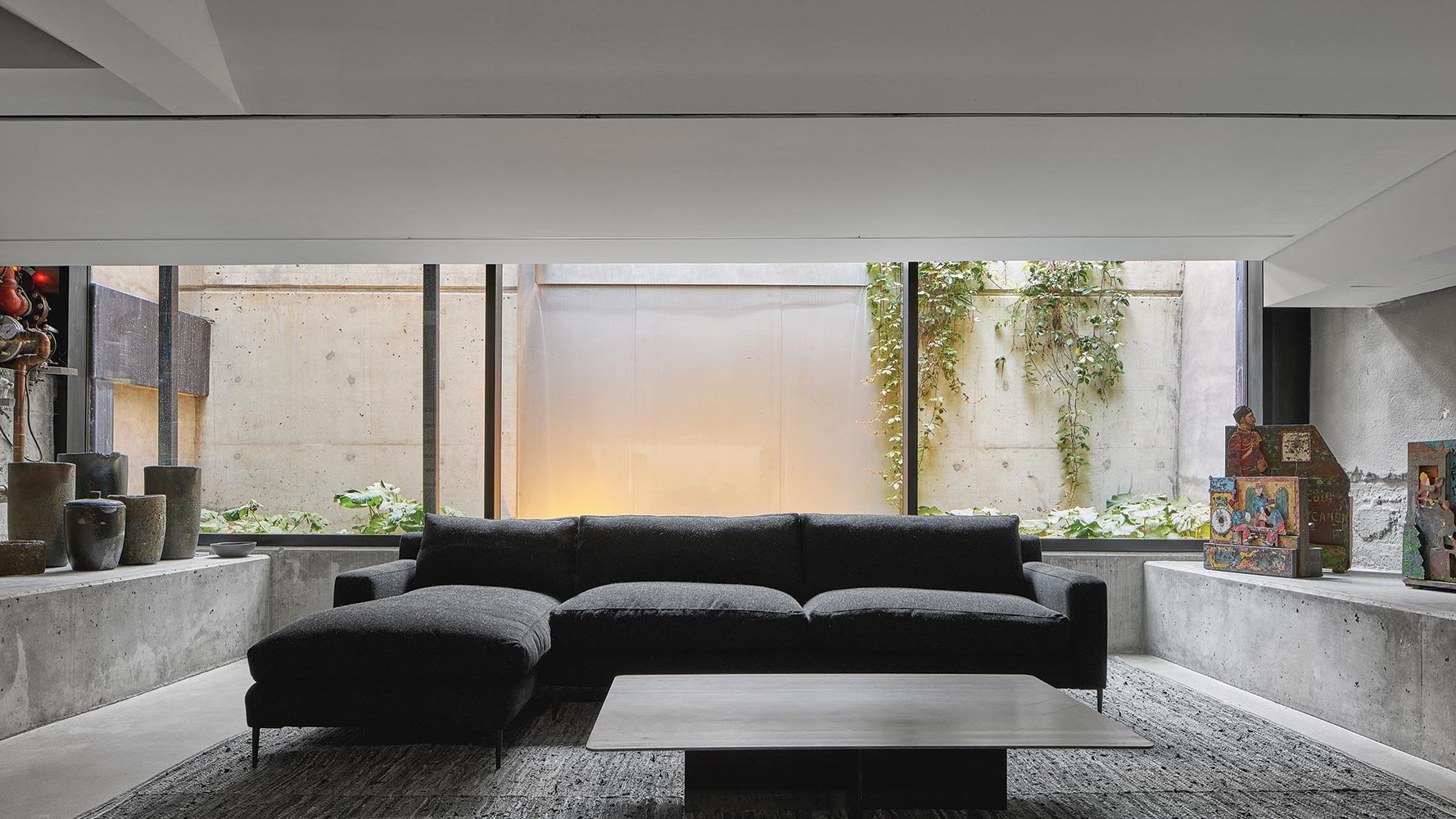 At the front of the basement, the floor has been excavated several feet and a trench brings in daylight. Photo © Nanne Springer

Throughout, Cohlmeyer’s interiors are deft and simple. The walls are plaster or concrete; the floors are concrete; and the ceilings are white drywall, some hung in a sawtooth pattern that maximizes floor height while accommodating steel beams. (The sawtooth form also seems to wink at the building’s industrial history, though Daniel Cohlmeyer says the reference wasn’t intentional.) Sleek open-riser stairs invite visitors to peruse all four showroom levels. What relieves the severe minimalism of the interiors is the persistence of the building’s history. The sawtooth ceilings are irregular; the ridges, like the beams they conceal, are not quite parallel. Slight changes in floor levels were left uncorrected, as were patches, visible edges of former walls, and the imprint of old tiling. An outline even remains where an opening that once accommodated the strip club’s two-story pole was filled. At the back of the showroom, a terrazzo staircase has been restored; a stylish, aluminum-clad elevator cab dating to the 1950s, by contrast, has largely been kept as found.

Together, these quirks and imperfections give the showroom a down-to-earth quality often lacking in luxury boutiques. They make it easier to imagine how Montauk’s furniture might look in an actual home. And they ground Montauk Sofa in its hometown—the company’s headquarters are in a small, light-filled space on the fifth floor, and its furniture is made in a factory just a few miles away. “The language of the city is felt within this building,” says Daniel Cohlmeyer.

Montauk is now planning one more addition to the building: a metal plaque, to be placed outside the garden, reading, in French, “The Montauk Sofa building, contemporary and minimalist, was conceived by the internationally renowned firm of Cohlmeyer Architecture.” It’s a generous act of recognition, and also, sadly, one of remembrance. In June 2021, Steve Cohlmeyer died at the age of 74 after 40 years at the helm of his namesake firm. Zyto recalls Cohlmeyer, near the end of his life, walking through the near-complete building and remarking that the sawtooth ceiling looked like waves rolling across the horizon. It’s fortunate that Cohlmeyer saw the project realized, for, though the showroom isn’t one of his largest or best-known projects, it is a worthy final work, and one deserving of outsize recognition. 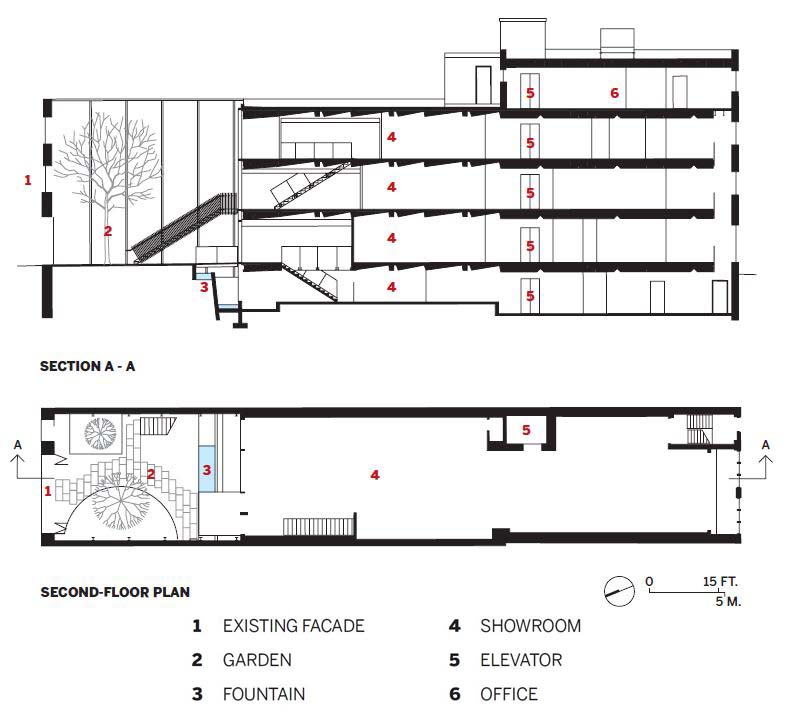