Excerpts from the Life and Work of One of the Nation's Most Talented, if Overlooked, Architectural Photographers

Twenty-five years after his death, the first book dedicated to the life and work of G.E. Kidder Smith—one of America’s most talented, if overlooked, architectural photographers—explores his impact on architectural appreciation in the U.S. and beyond, as he documented historical architecture and the great buildings of his time. Following is an excerpt from the foreword by Michelangelo Sabatino.

As an author, educator, photographer, and “builder” of books and exhibitions, G.E. (George Everard) Kidder Smith (1913–97) was a multidimensional figure within the wideranging field of North American architectural professionals in the second half of the 20th century. From his start during the volatile years leading up to, during, and immediately following the Second World War, Kidder Smith excited the imagination of the general public as well as architecture professionals by publishing photography-rich books about new and old buildings in a range of countries. Although Kidder Smith was propelled in his travels by a powerful wanderlust, he was no flaneur. Self-portrait by Kidder Smith at the Temple of Athena Nike on the Acropolis, Athens, circa 1938. Photo courtesy of Università Iuav di Venezia, Archivio Progetti [Iuav AP], click to enlarge.

Kidder Smith trained as an architect (licensed in 1946 and elected FAIA in 1959), but he chose not to practice within the conventional strictures of an architecture office. Instead, he “designed,” researched, wrote, and photographed a remarkably diverse collection of books about architecture and the built environment. From the very beginning, Kidder Smith also strategically deployed the content of his books to curate exhibitions that would help disseminate his work.

Unlike most of his contemporaries, who received commissions directly from clients, Kidder Smith’s independent temperament led him to prefer taking photographs for his own books, even though this professional freedom came at a personal cost; it required a time-consuming process of applying for and receiving grants from a variety of foundations, cultural institutions, and universities. Each of his books required extensive planning and intense travel for prolonged periods of time, together with his companion, collaborator, and spouse Dorothea “Dot” (1916–2015).

Scholarly overviews have been published about other individuals and firms in the North American professional landscape such as Hedrich Blessing, Robert Damora, Balthazar Korab, Maynard L. Parker, Panda Associates, Cervin Robinson, Ezra Stoller, and Julius Shulman. Kidder Smith, however, had not been the subject of an historical assessment. Happily, this lacuna is now filled by this abundantly illustrated book written by Italian-British educator and architectural-photography historian Angelo Maggi. Focusing on the intersections of architecture, photography, and graphic design, it draws upon the vast and variegated archive donated by the Smith family to the Archivio Progetti of the Università Iuav di Venezia. 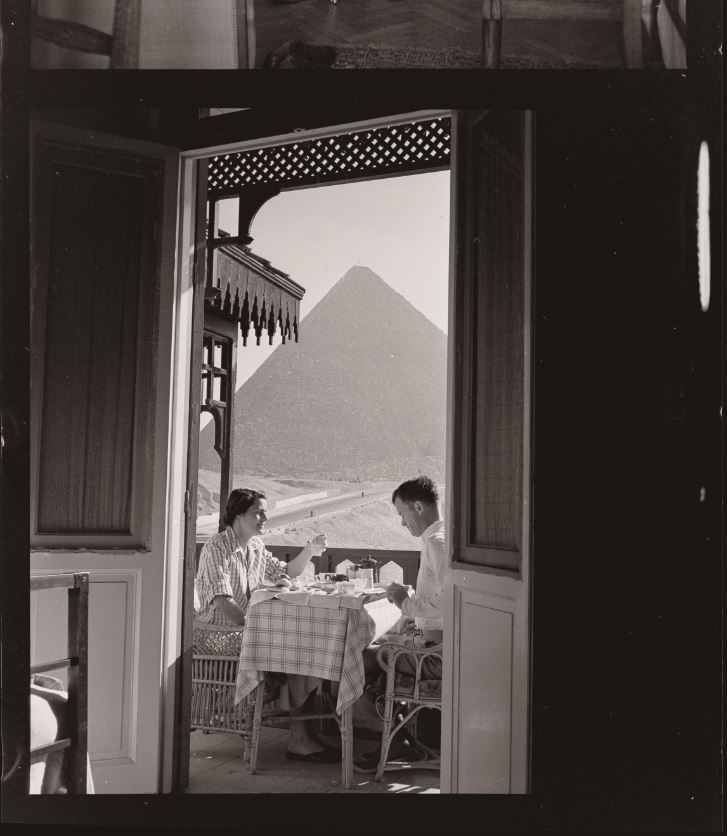 The Smiths having breakfast in their hotel in Egypt circa 1950. Photo courtesy of Università Iuav di Venezia, Archivio Progetti [Iuav AP]

In search of meaningful images, Kidder Smith and Dot visited not only known but also lesser-known buildings and sites in towns and cities throughout the Americas, Europe, Africa, the Middle East, and India. Shortly after the Second World War and during the dawn of the jet age, travel was still relatively difficult. Kidder Smith’s first books, produced during the early 1950s through the early 1960s, provided glimpses into worlds that were still out of reach for most Americans. The Smiths were a cosmopolitan and adventurous couple, propelled by a combination of curiosity and discipline, without which the remarkable body of published books would not have been possible.

With his illustrated books of the early ’50s, Kidder Smith used “builds” to address the built environment as a complex whole in which vernacular buildings coexisted alongside architect-designed ones: he first used the “builds” concept in his 1941 Stockholm Builds exhibition, then in “The Navy Builds” essay in 1946, and finally in his first three books: Sweden Builds (1950), Switzerland Builds (1950), and Italy Builds (1955). G.E. Kidder Smith was part of a distinct group of individuals who simultaneously wrote and illustrated their books. Unlike the work of Julius Shulman or Ezra Stoller, who typically worked for clients, none of Kidder Smith’s photographs have assumed “iconic” status. He often drew attention to his dual role as author and photographer on the frontispiece of his books. Some of his peers in America include the prolific architect-turned-photographer and curator Bernard Rudofsky (1905–88), cultural historian Wayne Andrews (1913–87), and architect Norman F. Carver Jr. (1928–2018). All of them were particularly interested in exploring how traditional environments could inspire contemporary architecture and urban design at a time when American cities were struggling with the pressures of “modernization.”

Although the Builds series became his early “brand,” Kidder Smith continued to produce a range of other ambitious survey books about modern architecture, aimed at a broad audience. After his far-flung travels over the decades, Kidder Smith focused on his own country and produced a series of books on the United States that coincided with the celebrations of the nation’s Bicentennial in 1976, spanning broad chronological time frames: A Pictorial History of Architecture in America (1976), and a three-volume The Architecture of the United States (1981).

His photos and books will continue to serve as an important documentary record of cities and landscapes that have subsequently undergone significant transformations due to mass tourism, pressures associated with “development,” and neglect.

His article “The Tragedy of American Architecture,” published in the November 1945 issue of Magazine of Art, shortly after the end of the Second World War, is animated with urgency; in this article he seeks to persuade mainly his American readers to demand an architecture that eschews sensationalism in favor of “an architecture of the people, by the people, and for the people.” Perhaps this aspect of his legacy, more than any other, has something to teach us today.