Bjarke Ingels Group
Architects do a lousy job of selling their ideas to the general public, said Bjarke Ingels, on Thursday morning during his keynote address at Architectural Record’s annual Innovation conference in New York. 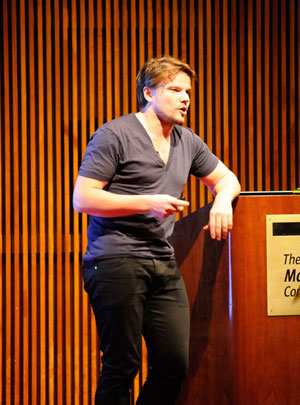 They need to “find ways to present their ideas or concerns in words that are so clear that non-architects will actually take an interest in them,” said Ingels, founding partner of the Bjarke Ingels Group (BIG), a Copenhagen-based architecture firm.

He spoke to a packed house in the auditorium at the McGraw-Hill Building in Midtown, Manhattan, where the ninth annual conference had drawn 400 attendees. Titled “Crossing Borders and Disciplines,” the day-long event also featured four panel discussions.

Wurman had presented the first Wall Street Journal Innovator of the Year award in architecture to Ingels the weekend before, and when the Danish architect took the stage to deliver his opening keynote, the World Architecture Festival had just proclaimed his 8 House in Copenhagen World Housing Building of the Year. Officially titled “Hedonistic Sustainability, Social Infrastructure and Public Participation Extreme,” the Innovation conference address, which Ingels, 37, delivered energetically in a black V-neck T-shirt, was at times like a motivational speech about how to make sustainable buildings fun.

“The Protestant idea that it has to hurt to be good,” is wrong, Ingels said and showed a photo of world leaders with pained looks on their faces at a recent United Nations conference on climate change. “As you can see, it wasn’t a party,” he remarked and got a big laugh.

Heeding his own advice, Ingels embarked on a highly visual and entertaining tour of his often whimsical body of work, using images of houses atop parking garages; mirrored ceilings; and giant silver balloons.

Presenting his work with Audi, the auto manufacturer, Ingels mused about what role cars might play in the city of the future, vis a vis how they move down streets. For decades, he says, most technological advances among car-makers were focused on improving navigation. But as cities turn their backs on autos, those manufacturers might now want to consider different ways of propelling the cars in cleaner, more pedestrian-friendly ways, including, perhaps, robotically. After all, he said, robots essentially already pilot subway trains and airplanes.

This could be accomplished using photovoltaic cells embedded in pavement, which could also be used to shut down certain streets if crowds were suddenly to gather there; animation showing how this redirected traffic might look used the theme from the 1980s TV show Knight Rider, which famously featured a driverless car. He announced that a prototype of the photovoltaic pavers would be on view in an Audi-sponsored pavilion at this year’s Design Miami.

In the “public participation” part of his talk, Ingels spoke about the city hall his firm designed for Tallinn, Estonia. Its main chamber has a mirrored and angled ceiling that functions as a “democratic periscope” to reflect the meetings of civic leaders to the public in a central plaza outside.

As a coda, Ingels also previewed the 600-unit apartment building he’s designed for developer Durst Fetner on West 57th Street in Manhattan. Groundbreaking for the building, Ingels’s first in New York, will take place in March, he said.

And true to form, it’s offbeat, with a pyramid shape. And instead of placing a courtyard in its center, it’s been relocated to a cavity in an exterior wall, on its sunny

southern facade. A “court-scraper,” he called it.
KEYWORDS: innovation conference