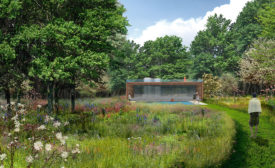 Yaddo, an arts colony that for nearly a century has nurtured some of the country’s most acclaimed writers, including Truman Capote, Sylvia Plath and Patricia Highsmith, is turning over a new leaf at its upstate New York campus.

C. J. Hughes
No Comments
Image courtesy Santiago Calatrava The recession halted the construction of Santiago Calatrava's 2,000-foot tower in 2008. The Chicago Spire, a hyper-tall condo from Santiago Calatrava that tried to soar into the record books as the world’s second-tallest building, only to get mired in the recession, may be inching back to life. The developer of the twisting, 2,000-foot tower, Shelbourne North Water Street, is close to paying off $135 million owed to creditors of the bankrupt project, sources close to the project say. Those payments, which could be approved in October, include $109 million to a local division of mega-developer Related
Read More

C. J. Hughes
No Comments
10 Hudson Yards, designed by Kohn Pedersen Fox, is nine stories out of the ground. It will reach 52 stories. The steel platform that is vital to the $20 billion Hudson Yards mega-project in Manhattan—what will allow three high-rise towers to be built atop of working railroad tracks on the eastern half of the site—is taking shape, after a slow start. For a time it seemed like the project would never happen at all; the development team was chosen in 2008, but groundbreaking didn’t occur until well after the recession, in late 2012. But on Thursday, large sections of the
Read More

Letter from Rochester: Attempting a Reboot

C. J. Hughes
No Comments
The renovation and adaptive reuse of a historic department store building is just one of many projects that are a collective attempt to revitalize the upstate New York city. Continuing efforts to revive Rochester, New York, after decades of decline, The Architectural Team (TAT) has embarked on a plan to transform a former department store into a mixed-use complex that will have apartments, offices, and a rooftop garden. The $200 million plan, which is in partnership with the WinnCompanies, an adaptive-reuse developer, focuses on a store known as Sibley’s (Sibley, Lindsay & Curr Company), which was a much-loved retail fixture
Read More

C. J. Hughes
No Comments
Photo courtesy Tarantino Studio The Bachman-Wilson House (1954), designed by Frank Lloyd Wright, has been purchased by the Crystal Bridges Museum of American Art. A Frank Lloyd Wright house that its owners say is imperiled because of frequent flooding will soon be headed for higher ground, and presumably, drier ground, too. On Wednesday, the Crystal Bridges Museum of American Art announced that it had purchased Wright’s 1954 Bachman-Wilson house, which it plans to relocate from a riverbank in New Jersey to its campus in Bentonville, Arkansas. “It won’t face an issue of rising water here,” said Diane Carroll, a spokeswoman
Read More

Fixture of Buffalo Skyline To Be Revived

C. J. Hughes
No Comments
A rendering of the new glass atrium that will mark the entrance to the hospital-turned-hotel. In Buffalo, a hospital by some of the best-known designers of the 19th century, left for dead in the 20th, is being revived as a boutique hotel. The landmarked Buffalo State Asylum for the Insane, by Henry Hobson Richardson along with Frederick Law Olmsted and Calvert Vaux, is adding an 88-room hotel and conference center, as well as fresh landscaping, as the Rust Belt city bets that its architectural heritage can attract tourists. The redesign, led by Deborah Berke Partners and finalized last month, will
Read More

C. J. Hughes
No Comments
The recession, falling crime rates, and a demand for more humane designs are changing the justice sector of the architecture industry.
Read More

C. J. Hughes
No Comments
The announcement that the Architecture Billings Index (ABI), a reliable measure of the industry’s health, had clocked in at a post-recession high of 54.9 in February has many designers feeling that the worst of the downturn is behind them, even if they have made that claim before. The ABI has now surpassed 50 for seven straight months, its best performance since the official 2009 end of the recession. Still, hiring continues to be soft, as firms refocus their energies. Image © Architectural Record ABI Index “We’re still hunkered down, trying to be very efficient at everything we do,” says Steve
Read More

C. J. Hughes
No Comments
Photo © Leonardo Finotti The triple-glazed facade of Christian Kerez's Leutschenbach School in Zurich is emblamatic of the transparency that's currently popular in new school design. It is unknown how, if at all, the elementary school shootings in Newtown, Connecticut, will affect school design going forward. The Newtown, Connecticut, elementary school shootings on December 14 that killed 20 students and six staff members have prompted many to call for a ban on semi-automatic rifles, or assault weapons. In the week since the shootings, others have said video games should no longer contain such violent content. And some are urging that
Read More

A decade after it first appeared on a drawing board, 300 people gathered today on Manhattan's west side to celebrate the official start of the 26-acre development. Image Courtesy New York City Mayor's Office A rendering of the Hudson Yards development on Manhattan's west side. Hudson Yards—one of New York City’s largest-ever construction projects, and one of its most delayed—officially got underway on Tuesday morning, a decade after first appearing on a drawing board. Photo © Spencer T. Tucker, Courtesy New York City Mayor's Office On Tuesday, New York City Mayor Michael Bloomberg (third from left) joined Related Companies and