Kurokawa's Capsule Tower To Be Razed

By Yuki Solomon
Kisho Kurokawa can’t seem to catch a break these days. Just days after the Japanese architect lost his bid for the governorship of Tokyo, the Nakagin Capsule Tower, his best known building and one of the few built examples of the Metabolist movement, was given a date with the wrecking ball. 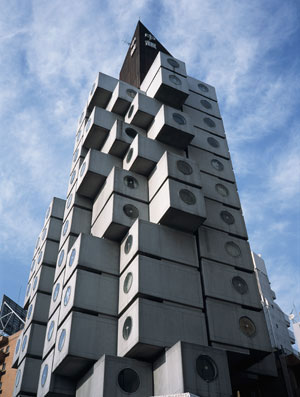 The Capsule Tower, completed in 1972, stands in the center of Tokyo’s affluent Ginza neighborhood. The building is actually composed of two concrete towers, respectively 11 and 13 stories, each encrusted with an outer layer of prefabricated living units. It has long been appreciated by architects as a pure expression of the Metabolist movement, popular in the 1960s and 1970s, which envisioned cities formed of modular components. But in recent years residents expressed growing concern over the presence of asbestos. On April 15, the building’s management association approved plans calling for the architectural icon to be razed and replaced with a new 14-story tower. A demolition is yet to be determined.

For his part, Kurokawa has pleaded to let the Capsule Tower express one of its original design qualities: flexibility. He suggested “unplugging” each box and replacing it with an updated unit, letting the base towers —which he calls “timeless”—remain untouched. Japan’s four major architectural organizations, including the Japan Institute of Architects, support this scheme. But the building’s management remained unconvinced and raised concerns regarding the towers’ ability to withstand earthquakes, as well as its inefficient use of valuable land. The new building will increase floor area by 60 percent.

Following the board’s decision, only Kurokawa continues to raise protest. If the Capsule Tower is destroyed as planned, it will join a growing list of losses. His Sony Tower in Osaka, completed in 1976, came down last year; Plantec Architects designed a glass-walled commercial building that will replace it.