By Blair Kamin
Santiago Calatrava’s planned Chicago Spire has earned its share of nicknames, among them “The Drill Bit” and “The Twizzler.” Now it has a new one: “The Lien-ing Tower of Chicago.” Crain’s Chicago Business coined that phrase after Calatrava in October filed a lien against the Irish developer of the 2,000-foot condominium tower seeking $11.3 million in payment. While major construction on the tower has stopped, the liens keep coming. 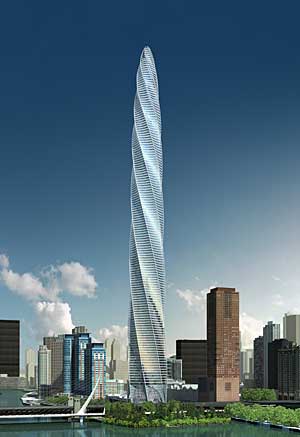 Construction of Santiago Calatrava's Chicago Spire has come largely to a halt. If ever completed, the 2,000-foot-high condo tower would be the tallest building in America.
Image courtesy Shelbourne Development
In addition to Calatrava’s lien, filed through his Lente Festina Ltd. against Shelbourne Development Group Inc., Perkins+Will, the Spire’s architect of record, is seeking nearly $4.85 million from Shelbourne. Meanwhile, New York-based Thornton Tomasetti, whose Chicago office was working with Calatrava on the project’s structural engineering, has filed its own lien for $1.3 million.
Kim Metcalfe, a spokeswoman for Shelbourne president Garrett Kelleher, says the liens were anticipated and that the developer is working with Calatrava and the other consultants to resolve the payment issue. Just how much the firms might be paid, however, is a matter of debate.  About 30 percent of the tower’s 1,200 condominiums are sold, including the penthouse, originally priced at $40 million and snapped up by Beanie Babies magnate Ty Warner.
Since it was unveiled in 2005, the Spire captivated Chicagoans with an audacious design that made the tower appear to twist as it rose, an effect achieved by having each floor rotate slightly over the one below it. Calatrava became the project’s public face, disarming opponents by drawing his trademark watercolors on an overhead projector at public hearings. Seeking to create a total work of art, he even designed two model apartments, right down to the custom-designed doorknobs. His aim was to humanize the gargantuan project, which was to have been the tallest building in America and one of the tallest in the world.
Although construction began on the Spire last June, work ground to a halt this fall, leaving a circular hole on the 2.2-acre lakefront site, ringed by caissons that were to have supported the tower’s cylindrical concrete core. Kelleher’s spokeswoman insists that construction will resume and that the global credit crunch is to blame for the pause. “We’re waiting for the banks to start acting like banks again,” she says. Some real estate analysts, however, argue that the developer did himself in by starting work without a construction loan that would have carried him through the entire project. In the meantime, the hole, 76 feet deep by 110 feet across, is inspiring commentary of its own. Among the uses dreamed up for it by architecture buffs: an oversized golf hole guaranteed to produce a hole in one.