School rankings can seem mysterious, especially when they change from year to year. The 2014 rankings compiled by Greenway Group are no exception. While certain ones remain the same, others have shifted up or down. Basically, the survey asks architecture firms and corporations which architectural programs—both undergraduate (B.Arch.) and graduate (M.Arch.)—best prepare students for practice. When Greenway compiles its ranking, RECORD publishes the top ten in both categories, while more extensive data appear in the November-December "America's Best Architecture and Design Schools" issue of Greenway's publication, DesignIntelligence.

Greenway's chair, James P. Cramer (read an interview with Cramer), explains that ratings fluctuate because surveys depend on variables such as how many firms participate. For the 2014 top-schools rankings, Greenway gathered data from 693 professional practices and corporations, an almost 250 percent increase from the number of firms (282) responding to the 2013 survey. To supplement its information, Greenway also asked 89 deans and chairs of architecture schools what they consider to be the significant issues facing architectural educators today and polled 2,760 students about their satisfaction with their architectural education.

Rankings, fluctuations and all, remain important as a measure of performance for an education that is often expensive and must prepare students for an ever-changing architectural practice. While the economy is still sluggish, the employment rate for these graduates is higher now than in 2009, when unemployment was 13.9 percent for recent college graduates in architecture, and 9.2 percent for those over age 30, according to the Georgetown Center on Education and the Workforce. Currently unemployment is about 5 percent, according to the Department of Labor, although Greenway estimates that the number is sometimes closer to 0, depending on the region.

Enrollment in architecture schools is at a plateau: the National Architectural Accrediting Board reports that 15,187 students were enrolled in 2012 in 57 B.Arch. programs and 11,277 students were in the 95 M.Arch. programs. The numbers of students overall decreased by 2.3 percent from the previous academic year. As Cramer notes, schools need to be concerned about supplying enough well-trained architects to meet the demand. 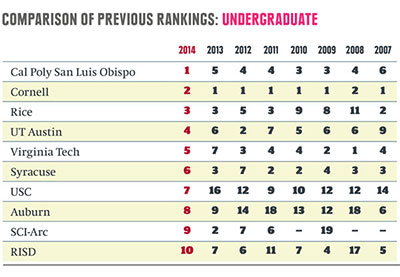 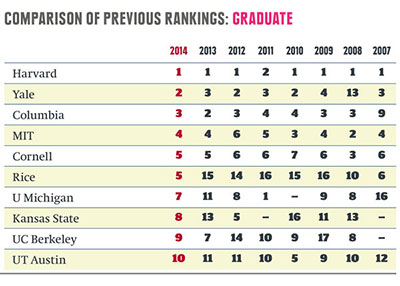 Note: Where more than one school receives the same number of votes, the schools are given the same numerical ranking, and the next rank is omitted.