By Bryant Rousseau
Craig Robins is the president of Dacra Development, a Miami-based company whose projects have always placed a high premium on design. In the late 1980s, Dacra played an instrumental role in the revitalization of South Beach, restoring a number of Art Deco landmarks—and helping transform the area from a shabby backwater into the international hotspot it is today. 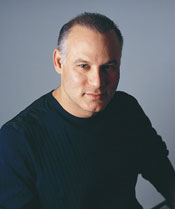 For the past seven years, Dacra has led the redevelopment of the Miami Design District, working with such architects as Craig Konyk, Alison Spear, Walter Chatham, Enrique Norten, John Keenan, and Terence Riley to restore the area’s 1920s- and 1930s-era buildings.

One of Robins’ most recent projects is also perhaps his boldest: Aqua, a community of 151 townhomes and mid-rise condominium units on an 8.5-acre island near Miami Beach. The urban-planning firm of Duany Plater-Zyberk—noted proponents of New Urbanism—created the site’s master plan. But while New Urbanism is often associated with traditional design, Robins wanted Aqua to “reconcile the rift between New Urbanism and Modernism,” and he invited 10 different architects, all known for their contemporary vocabulary, to design the island’s homes.

Robins’ intense interest in design extends beyond his role as a real estate developer. He is the principal of Design Miami and Design Miami/Basel, highly successful fairs for ultra-high-end design. A major collector of contemporary art and design, Robins also serves on a number of museum boards, including the Miami Art Museum, the Hirshhorn Museum and Sculpture Garden, and the Wolfsonian-Florida International University Museum. He is also a member of the Yale School of Architecture Dean’s Council. In 2006, he won the Design Patron Award from the Smithsonian Institution’s Cooper-Hewitt National Design Museum.

Architectural Record: Craig, you played an important role in not one but two rather remarkable urban transformations: South Beach in the early 1990s; and, more recently, the Miami Design District. What’s your formula for the successful revitalization (or creation) of an urban community?

Craig Robins: Most developers and also most architects are mainly focused on one structure, one piece of land, and how they can optimize that in whatever way that fits their priorities. Dacra has a very different approach. Rather than focusing on a specific structure, I always think in terms of neighborhood and community and how we can better that total area. And by doing that, we really consider very seriously urban design. Once we have an urban design strategy, we then go to the part that most people do first, which is to look at how to optimize particular structures.

CR: Because we see ourselves as stakeholders in the entire neighborhood, and because we have multiple assets usually in that neighborhood, our primary objective is to make the neighborhood better. So while we attempt as much as possible to make an individual project financially self-sufficient, our priority is not necessarily to make the most profit out of a particular structure. It’s to make the best neighborhood possible which will overall lead to the highest profit level.

Let’s talk about your Aqua project, which you’ve said was an attempt to “reconcile the rift between New Urbanism and Modernism.” Some might say that is like trying to reconcile oil and water. What made you think that you could reconcile these design philosophies?

There’s a lot of emotionally charged political animosity between the movements, and, like all of these things, some of it is justified and some of it is irrational.

New Urbanism has mainly expressed itself with traditional architecture which Modernism clearly stands against. But Aqua demonstrates that you can have modern-style architecture and contemporary art—and that they can benefit from pretty rigorous urban design.

Look, I have no interest in building traditional architecture. I want to work with architects of my time. But I have not seen an urban design that I have gravitated to more than some of the principles of traditional town planning. I have just not come across any other urban design that is as meaningful to me as New Urbanism. And urban design is a very material factor in making a project like Aqua work: You need to have a great sense of community, of a place that is livable and pedestrian friendly.

Zaha Hadid has done some urban planning, and I’d like to better understand her ideas about urban design and how they move us forward from traditional town planning. So I’m certainly not against the idea of finding a better model.

In general, how would you characterize the type of architecture that attracts you as both a developer and a design connoisseur?

CR: I am willing to go out on a little bit on a limb here. I have no idea why anybody who’s working today would call themselves a Modernist.

Can you elaborate on that?

CR: Yes, the great architects of today are contemporary designers, and the rigorous principles and ideas of Modernism are probably what they should primarily be influenced by. I’m not sure I could point to an alternative better movement that would be part of the roots of today’s creative expression in architecture and design.

But you know in art, no one is trying to be a Modernist; no one wants to be considered Picasso or Braque or Matisse. Everybody respects them, but everybody sees themselves as a contemporary artist. So I find it very hard to understand why architects want to call themselves Modernists. … You can see a lot of biomorphic, organic expression in architecture today, a lot of curvilinearity, that doesn’t seem to relate exactly to Modernism—and is the most highly respected, most highly regarded, most visionary architecture of our time.

There are a number of architects whom you work with again and again: Alexander Gorlin, Walter Chatham, Alison Spear, Keenan/Riley. What is about these particular architects that makes you return to them again and again? What do you look for in an architect with whom you plan to work with continuously?

CR: The most important criteria for me is someone who has a high level of creative talent, but will also be inspired by our project. One could understand why, let’s say Frank Gehry, probably would not be so excited about doing a little building in the Design District, especially 10 years ago [laughs]. Maybe today the Design District will get to a level where even Frank Gehry would be inspired, and then it would make a lot of sense to work with him. What I’m saying is it’s always important to merge not only the talent, but to pick the right person for the right project. And the criteria is: Will this person be inspired?

You mentioned Gehry. Name a living architect with whom you haven’t worked with whom you’d be intrigued to do a project.

CR: There are architects who I feel are of the talent level but are beyond me. But certainly being a trustee for MAM [the Miami Art Museum] and on the architectural committee there, and the ability to do a really important project with Herzog & De Meuron is wonderful [the firm is designing MAM’s new facility]. My ongoing relationship and friendship with Zaha is clearly inspiring, and I’d like to do more with her. SINAA is a firm that I could possibly work with on the right project, and I’d probably like to do something with them. Although by my criteria, it’s also a little bit late, but not too late. If I had something right now, I’d love to get it started with them.

A little too late meaning …

CR: By next year, SINAA will probably be so much more famous that it may not be as inspiring for them to work with me. But certainly they’re very interesting. There are architects that are not as famous yet, and just as interesting. Mansilla and Tuñón from Spain would be really interesting to work with. I need more projects fast [laughs].

What can a developer do differently to improve the relationship with architects? The stereotype, the cliché, is that it’s a relationship always very fraught with conflict, with the developer looking to control costs and the architect wanting to fully express his creative vision.

CR: The most important thing is trust. I try to allow for the maximum creative expression and establish a really trusting relationship with the people I’m working with. So that they know that any limits I need to put are not arbitrary, and I’ve never worked with an architect where I don’t think we both felt that our interests and our goals were totally aligned. Architects want to optimize creative expression, but they also want the project to get built and be successful.

You’re very actively involved with MAM and have served on the Architecture Committee at the Museum of Modern Art. I’m curious, given your intense involvement with museums—what’s the best architecture exhibition you’ve ever seen?

CR: One of the best shows I have ever seen in any creative discipline was Zaha’s show at the Guggenheim. To see the way that Zaha managed to interact with Frank Lloyd Wright was an unbelievable experience for me. I can’t tell you how many genius artists probably feel like they wouldn’t choose the Guggenheim as a structure to have their retrospective because it’s a challenging architectural environment. But Zaha is such a talented designer of display and of installation work that she understood how to work with the space; it really worked for her.

CR: Once you realize that art and architecture are very different but equally collectible, then the architectural models and the drawings become really fascinating. And these tie so much into art, and yet it’s not art at all. It’s a different creative discipline—although of course those lines can be incredibly blurred. So it’s a very exciting time. At Design Miami this year in Basel we had two major galleries showing architectural models and drawings, and it was phenomenally successful.

Is that something that you personally would be looking to start collecting, or maybe you already have?

CR: Yes, I already have. Some art collectors don’t love drawing. I love drawing, and architectural models are like an artist’s sketches—and that process of creating a design for a structure fascinates me.

CR: Yes, there was beautiful Frank Lloyd Wright, there was van der Rohe, there were beautiful things by Zaha. But it’s the wrong orientation to say who is going to become hot; it’s much better to say who is important and to wait it out.