"Smart Glass" on the Verge

After languishing for years outside the mainstream, "switchable glazing" is poised to become a viable alternative and could soon have a significant impact on facade design.

Sara Hart
Order Reprints
No Comments
Most people are familiar with sunglasses that have photochromic lenses. Commercially available since 1983, the lenses darken in response to ultraviolet light and revert to clear when the exposure is removed. Though it may not seem like much of a leap from eyeglasses to windows, this technology has been slow to infiltrate the building-products marketplace. 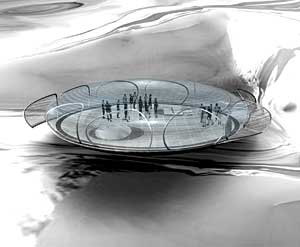 Rendering: ' Werner Sobek
But now it appears that both private- and government-sponsored research could soon make more energy-efficient building products widely available. One of the areas receiving considerable attention is “switchable glazing.” The National Renewable Energy Laboratory (NREL), the Department of Energy’s (DOE) primary laboratory for renewable energy and energy-efficiency research, has focused much of its attention on windows, and with good reason. NREL reports, “Windows contribute about 30 percent to building heating and cooling electrical loads nationwide. Thus, potential energy savings from the wide-scale use of advanced windows is nearly 6 percent of the national energy consumption.” NREL’s research includes advanced window concepts, particularly those combining high thermal efficiency and dynamic transmittance of light. A key area of research activity is in switchable glazing, also known as “smart glass,” for a variety of residential and commercial applications. The goal is to create a viable product to control the light and gain transmittance through windows. The benefits are clear: reducing light reduces glare; reducing solar gain reduces energy costs; and controlling transparency controls privacy.

“Smart glass” and “switchable glazing” are generic terms that refer to all types of passive and active systems. Photochromic and thermochromic glazing, which are light- and heat-sensitive, respectively, are considered passive, because they do not require electricity. Those transitional sunglasses are smart, but passive. Active-control or electrochromic systems offer more options, but must be hard-wired to a power source.

Active technologies are the focus of most of the current research. Electrochromic windows are generally considered to be the most suitable chromogenic technology for energy control in buildings. They reduce or block light transmission and alter transparency in response to environmental signals, such as glare, sunlight, or temperature. The change from transparent to tinted is achieved when a small electrical current is applied to the window. The window returns to transparent when the voltage is turned off. Light transmittance during operation varies from 5 to 80 percent. Once the change in tint is initiated, the electrochromic glazing does not need constant current to maintain the tinting. In addition, the film can be tuned to block certain wavelengths, such as solar (heat) energy.

Electrochromic windows are made up of several extremely thin plies. Darkening occurs when hydrogen or lithium ions from an ion-storage layer are transmitted through an ion-conducting layer, which, when a voltage is applied, hurls the ions into an electrochromic layer typically made of tungsten oxide. The ions cause this layer to absorb visible light, thus darkening the window’s glass. The thin plies are sandwiched between two sheets of a transparent conducting oxide material. Finally, all the layers are encased between two layers of glass. (Gasochromic windows are similar to electrochromic, but rely on diluted hydrogen in the cavity of the insulated window unit to effect color change.) The main advantage of electrochromic windows is that they typically require low-voltage power, remain transparent across their switching range, and can be modulated to any intermediate state between clear and fully darkened.

Some of the most exciting electrochromatic research is taking place at the Lawrence Berkeley National Laboratory (LBNL), another DOE agency. Tom Richardson and Jonathan Slack of the lab’s Environmental Energy Technologies Division are developing switchable-mirror (reflective) technology. By avoiding the rare earth metals originally used in metal-hydride switchable mirrors, Richardson and Slack expect to lower the cost and simplify manufacturing. Energy performance is also improved, since the new windows can reflect or transmit both visible and infrared light.

“We are working to make reflective, electrochromic windows,” explains Richardson. “These would give the user more control of the relative reflectance/transparency than is possible with gasochromic windows. Reflective electrochromic windows have several advantages relative to both the static low-E products now used in nearly all new construction and to the absorbing electrochromic windows now on the market. They can become opaque to provide privacy and control glare even in direct sun.” Because one can choose to admit or reject solar energy at all wavelengths, they offer better savings on heating, cooling, and lighting costs. They also do not get as hot in direct sunlight and, in principle, should be less expensive to manufacture.

"Smart Glass" on the Verge

Smart Cities: Big Data, Civic Hackers, and the Quest for a New Utopia