How does your firm handle pro bono work?

The architecture profession faces one practical obstacle in making the case that architects bring larger value to the public than simply providing design and construction services. That is, that many individuals and organizations simpy cannot afford to hire an architect, or doing so would create a significant hardship for them. And unlike law and medicine, which have developed strong programs to provide access to legal representation and health care for all members of society, for the most part, architecture is currently structured as a fee-for-service industry.

Victoria Beach, AIA, a former professor of ethics at the Harvard Graduate School of Design and current member of the AIA National Ethics Council, says, “Professional ethics involves skills and situations that are unique to architects as professionals, not just as citizens.” She adds, “Pro bono service is based on the idea that professionals have ‘special knowledge.’ Providing this special knowledge even to people who cannot pay for it is what distinguishes a profession from a mere business.”

She distinguishes professional ethical activities from more general philanthropy with a memorable shorthand of Pro, Joe, and Schmoe. In this hierarchy, refraining from fraud or deceit — not stealing from your client, for example — is a Schmoe activity in that it is discouraged more by the threat of jail time than by a higher professional code of conduct. Painting a Habitat for Humanity house would be a Joe activity, as it does not require professional skills or abilities, but does represents a voluntary contribution that benefits society. Pro activities involve the use of skills and abilities that are unique to our profession. 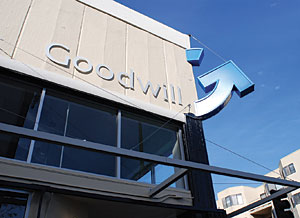 Photo courtesy McCall Design Group
The McCall Design Group provides pro bono services to Goodwill Industries.
Last year, the AIA added a sentence to its Code of Ethics & Professional Conduct encouraging architects to provide pro bono design services. A draft of new guidelines the AIA released for comment this summer defined pro bono services as “of a professional nature that are typically provided by a registered/licensed architect, firm, AIA component, or college/university, but for which those involved receive no financial compensation.”
This definition is broadly consistent with other professions that have pro bono expectations for their professionals. For example, the medical and legal professions have created networks of community-based clinics, supported by government funding as well as contributions of time and dollars from practicing professionals. Additionally, professionals in those professions are widely expected to contribute some form of pro bono service as an integrated part of their professional practices. According to the American Bar Association (ABA) at least 28 states have established specific annual goals for pro bono service in their codes of ethics.

A trend toward pro bono service

Although many firms do pro bono work, recently some have begun to coordinate these services as part of their overall business model. Nationally, this trend is supported by The 1% program of San Francisco– based Public Architecture. The 1% is a three-year-old program encouraging design firms to commit 1 percent of their billable hours each year to pro bono service. Public Architecture currently has enlisted over 400 design firms to pledge a total of 200,000 hours of pro bono design services. In the aggregate this contribution is the equivalent of a 100-person firm working full-time on behalf of low-income communities and the nonprofit organizations that serve them. Approximately 10 to 20 new firms sign on to The 1% pledge each month.
Through The 1% program, Public Architecture focuses on firms rather than on individual architects, based on the belief that the coordinated resources of a firm are needed for pro bono clients just as they are for fee-generating clients.

HOK has long had a commitment to pro bono design work, and over the past year formally pledged its time firm-wide via The 1% program. According to vice chairman Clark Davis, the firm’s pro bono projects are driven almost entirely by the initiative of the employees in each office. “HOK is a lot of different things to a lot of different people,” says Davis, “but in each case, our people are rooted in their local communities.”
For one of its pro bono efforts, the Toronto office of HOK connected with a nonprofit providing hospice care for terminally ill children. Professionals in that office worked over six years to select a site for a significant expansion, developed planning and design drawings, and then led a fund-raising campaign to make the project a reality. The sheer scale of this long-term commitment could only have been accomplished through the coordination of an entire office, not by one or two individuals acting alone.
The Asia Pacific office of HOK is working on a project in Mumbai, India, and a number of the firm’s planners and urban designers grew interested in the Dharavi section of the city. Dharavi, one of the largest urban slums in Asia and home to about one million people, is on the brink of being affected by a large-scale redevelopment project undertaken by the Indian government in partnership with local developers. Working on its own rather than with a formal government client, HOK independently developed an alternative approach, which would give developers access to certain sites, but also make them responsible for infrastructure improvements and affordable housing adjacent to those sites to minimize displacement and preserve the culture, livelihoods, and lifestyle of the locals. The scale of this project also required the resources of a professional office.
Clark says that pro bono service has provided tremendous bonding experiences for HOK employees, who need to communicate and collaborate effectively all of the time. And what works for one firm can also work for our profession as a whole. “Architects have often been so introspective that it has often hurt us and our standing as leaders in the community,” says Clark. “If we have the attitude that ‘we can do it better,’ then we’ve got to be ready to show the public how.”

Professional Liability Insurance for Architects: When to Get Serious

Nonprofit work experience: beneficial for all, but far too rare

Nonprofit work experience: beneficial for all, but far too rare