The downtown boutique aesthetic that emerged in New York City’s SoHo loft district in the late 1970s caught on––and stuck around––largely because it showed off arty clothes to striking effect. Architects and designers blithely stripped the deep and narrow loft spaces to their bare bones, leaving only cast-iron columns, concrete or wood floors, and white walls and ceilings, the latter often revealing ducts, pipes, and light tracks. Against this setting, clothes, spaciously arrayed as if in an art gallery, easily stood out. 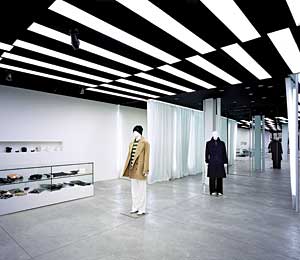 A new shop for Issey Miyake on Madison Avenue at 68th Street illustrates that the loft style also works in the ultra-chic purview of Manhattan’s Upper East Side. In an area known for its lacquered look (both shops and shoppers), a bit of a downtown feeling can juice up the ambience. When Issey Miyake changed locations on Madison last fall, it asked Gordon Kipping Architects/G TECTS, an architectural firm that worked with Frank Gehry on the titanium-infiltrated Miyake flagship store, in the Tribeca neighborhood, to design a small, 2,600-square-foot outpost.

To draw shoppers into the boutique, Gordon Kipping, AIA, glazed the entire 24-foot width of the storefront, framing it in black solid surface material. He then energized the interior by focusing on the ceiling plane. Here, backlit fluorescent panels, 10 feet long and 10 inches wide, alternating with black voids of the same dimension mounted with metal-halide spots, create a syncopated, elongated checkerboard pattern. The muted floor is 2-inch-thick concrete deck. I-section steel columns, painted white, run down the middle of the space. With a $400,000 budget, the architects installed plastic laminate counters, glass vitrines, and recessed shelves along the white south wall, and displayed the clothes—the only note of color—on white steel racks along the north wall. In the fitting area at the back, four-layered curtains of diaphanous, white fabric almost conceal bright, white, vertical fluorescent tubes. Fluorescent lighting, tucked behind the mirrored partitions dividing the dressing rooms, adds to the luminous, if surreal, effect.