While the Brooklyn, New York, neighborhood of Williamsburg is now the picture of urban cool, walking toward Marta and Julian Lwin’s loft offers a glimpse of the area’s seedier, not-so-distant past. The sidewalks outside this converted doll factory—a no-name, under-the-radar address in a rapidly gentrifying neighborhood—are as solitary and dark as the interior stairwells are grimy. Behind closed doors throughout the three-story building, however, young artists, musicians, and designers are abuzz with activity. 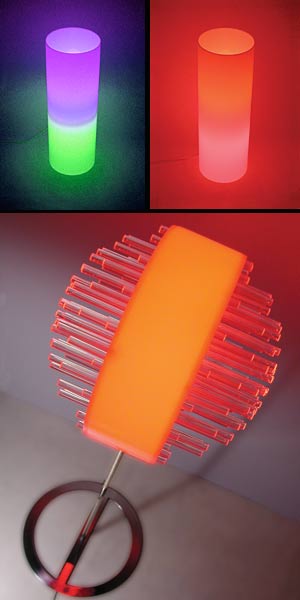 Lwin, a full-time lighting and furniture designer working under the professional banner Lwindesign, combines his studio, showroom, and home in one 2,000-square-foot, two-floor space. The multitasking inner sanctum virtually vibrates with his energetic product designs, awash in a spectrum of brilliant colors. The atelier encapsulates the seductive, secluded dynamism of this enclave of creative neighbors, and signals the strides already made by the 38-year-old British designer since he launched his burgeoning Stateside career seven years ago.

The contrasts between perception and reality, form and function, aren’t lost on Lwin, whose lighting fixtures and furniture pieces employ color for much more than decorative effect. As a design student at London’s famed Central Saint Martins College of Art and Design, in fact, he wrote his thesis on the psychology of color.

“Blue is a very calming, peaceful hue,” Lwin says, launching into a passionate yet casual discourse about his favorite topics, color and light. “Watery colors are almost never depressing. And oranges, magentas, and yellows always up the tempo of an interior space.”

While Lwin says he has heard the admonition “green makes you look sickly” more times than he can count, he insists that the color is, emotionally speaking, a neutral canvas perfect for capturing and reflecting light.

Lwin began creating luminaires, furniture, and other products in 1999, after immigrating to the United States with his artist wife Marta. First, he moonlighted while working for the industrial design firms Smart Design and Frog Design. He launched Lwindesign in 2002.