While growing up in Mumbai, India, during the 1970s and ’80s, Abhay Wadhwa had little idea that one day he would helm his own architectural lighting design firm based in New York City, he says. Nor did he envision that the roster of projects for his practice, AWA Architectural Lighting Designers, would be his passport to a globetrotting adventure that has led him to enhance the form and function of an array of buildings around the world. These days, Wadhwa shuttles for several weeks most months between his Manhattan base to assignments in Chicago, Asia, and India. He collaborates with an in-house, 15-member team of interior designers, engineers, and architects. (The staff is split between offices in Dubai, Mumbai, Hong Kong, and the Manhattan headquarters.) 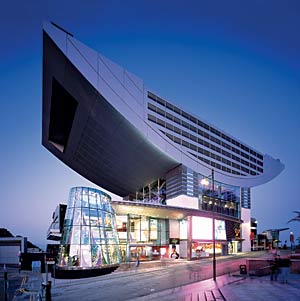 After receiving his B.A. from the Sir J.J. College of Architecture in Mumbai, Wadhwa worked as an architectural designer and then a theatrical set and lighting designer. His creative, career-shaping epiphany came, he says, as he strode the catwalk high above a theater stage. “It was the first time I had selected a range of very specific color gels and diffusers, saw the magical results they could achieve, and focused my first rig of light fixtures. I was hooked right then on pursuing the discipline of lighting design full time. Now, 20 years later,” he adds, “I still have a passion for lighting, and my roster of assignments allows me to work on the bigger stage of large-scale architectural projects.”

Wadhwa immigrated to the United States in 1993 to attend graduate school at the University of Southern California, then went on to earn a Master of Science degree from the Lighting Research Center at Rensselaer Polytechnic Institute in Troy, New York. (He has been an adjunct assistant professor there for the past three years.) For the following five years, Wadhwa worked on staff at several Boston and Manhattan lighting design firms, collaborating on high-profile projects such as the illumination of the George Washington Bridge and other landmarks. He went out on his own to establish his firm, Available Light: NY, in 2003. The company was renamed last fall.

From his downtown Manhattan studio on LaGuardia Place, down the block from the AIA Center for Architecture, Wadhwa focuses on both small- and large-scale projects for private, corporate, and institutional clients. The three projects shown here demonstrate the technical acuity and visual finesse that Wadhwa brings to his work. Whether it’s a historic Indian meeting hall in Mumbai or a sleek new multiuse center in Hong Kong, the lighting suits the site well, heightening the sensory experiences tied to time, place, and visual ambience.