At the Leslie L. Dan Pharmacy Building at the University of Toronto, Foster + Partners has turned contextual design on its head. Situated on a grassy lot at the intersection of College Street and University Avenue, the academic tower is located adjacent to the school’s historic Tanz Building. “We looked at the program and decided that instead of aligning the top of our building with the Tanz Building, it would be more interesting to play an inverted game and create a void,” says Nigel Dancey, senior partner at Foster + Partners. As a result, much of the building’s bulk is raised on concrete stilts, leaving room below for a transparent glass cube precisely the five-story height of its neighbor. Within the large, open void, the architects decided to suspend two massive classroom pods that they hoped would look as though they were floating on air. Working in collaboration with Chevy Chase, Maryland–based lighting firm Claude Engle, it didn’t take long for all involved to realize they could make the lozenges the building’s signature feature by illuminating them at night with a show of shifting hues. 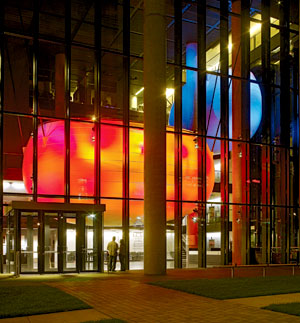 “We had this idea of theatricality, which explains the colored lights,” Dancey says. “Claude Engle III [the firm’s founder] and his son Claude Engle IV had both been very involved in theater design and knew about using gels and mixing colored lights to create some interesting effects.” The resulting display is managed by a preset computer-controlled-dimming system that changes the colors every 15 minutes throughout the night.

The team, led by Claude IV, originally thought about lighting the pods with concealed luminaires around the perimeter of each bulbous behemoth, but realized it couldn’t work. As the younger Engle explains, that would have required attaching luminaires to Foster’s glassy skin, which “would make the mullion become this fat thing” and muddle the architects’ intentions. Instead, Engle’s firm decided to use 128 actual 375-watt and 300-watt quartz halogen lamps in fixtures commonly used in theatrical lighting, attaching the plug-in lights to black theater pipes with standard C-clamps.

Thanks to the theater technique, “you can move these lights up and down for a totally flexible system,” says local lighting consultant Kenneth Loach. Moreover, “The lights themselves become part of the experience,” Claude III notes, adding that the team selected colors that were more sophisticated than those favored by local dramaturges: “It’s the difference between something that looks like a champagne fountain and something as elegant as an educational building ought to be,” he says.

The lighting designers mixed primaries, outfitting luminaires with Apollo dichroic filters held in place by frames. At dusk, the pods perform a metaphorical sunset, exchanging fiery reds and deep blues. They then proceed to a sequence of blues, yellows, and greens in a deliberately tight palette; colors introduced on the underside of one pod are later introduced in its mate. The theater lights are outfitted with borosilicate glass lenses with four beam spreads ranging from very narrow to wide flood, and are supplemented by 1,000-watt quartz theatrical flood fixtures.

The building takes an equally inventive approach to daylight. An atrium slices vertically through the core of the 12-story structure, pulling sunlight deep inside. To balance concerns about solar heat gain with the desire for natural light, Foster’s team covered the glazing on the south elevation of the glass cube with a large-dot frit pattern. The density of the frit pattern gradually decreases along the eastern elevation before opening up to mostly clear glass on the northern facade, where offices look out over Queen’s Park, the home of Ontario’s legislature.

In the offices and hallways lining the perimeter of the upper volume, “The fairly high window system allowed us to put in wall-wash lighting that is concealed and less expensive,” Claude senior says. Off-the-shelf fluorescent T8 luminaires were inserted in architectural coves, which delineate the building edge at night. “You can see how the floor plates start and stop,” his son adds. To reinforce the geometry of the interior architecture, the lighting consultants also integrated LEDs into the handrails of bridges and hallways that connect the labs, offices, and pods.

“This is an example of a very economic solution that’s quite spectacular,” says Claude III. “The building helps the lighting, and the lighting helps the building,” a success he attributes to collaborating with the architects on myriad projects. “We’ve done so many things together that we almost know how to finish each other’s sentences.”