Until recently, Houston’s meandering Buffalo Bayou river had been a camera-ready place—if you were using a long-range lens. “What makes this site really impressive is its view of the downtown skyline,” says Anne Olson, president of the Buffalo Bayou Partnership. 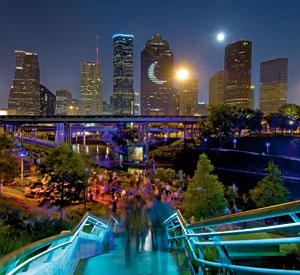 The body of water was another story. Container ships’ deep-water requirements had forced port uses to relocate to Galveston, and the bayou was only halfheartedly converted to a public amenity. Flooding from tropical storms eroded walking trails and bicycle paths, and non-native plants had invaded the remaining terra firma. Moreover, the city street grid and elevated Interstate 45 obscured views of the park to potential users above. Homeless inhabited the raw infrastructure below.

Now the bayou is ready for its closeup. Twenty-three acres of this landscape, known as the Sabine-to-Bagby Promenade, was recently given a $15 million overhaul as part of a 20-year-long master plan first released in October 2002. The site was reimagined by landscape architect SWA Group, and thanks to convincing by arts consultant Stephen Korns, the funding originally earmarked for public art was mostly channeled into a lighting plan by New York–based lighting design firm L’Observatoire International. Besides casting the park in a flattering light, L’Observatoire’s multi-layered scheme reconnects city dwellers to the nature at their doorstep.

L’Observatoire devised several means for grabbing the attention of passers-by. Access ramps and stairs include LEDs embedded underneath handrails to guide nighttime eyes toward the bayou. In addition, incandescent uplighting in the trees “gives more life to the plants,” Descottes says. While the uplighting is meant to differentiate the green trees from the surrounding high-pressure-sodium-orange haze, Descottes admits that the effect is subtle: “It’s to have a bit of an undiscovered feeling.”

A romantic scene unfolds upon descending the access routes. Inspired by the historic outdoor leisure spaces of Paris—where Descottes lived until 1993—and London, the L’Observatoire team dotted the paths with pools of warm light, which also enhances a sense of security. The lamps are installed with a glass diffuser specifically chosen so that pedestrians can discern the shining filament; they are dimmed to enhance the old-time effect, and, Descottes adds, to extend the lamps’ life spans.