The Clinic at Clarke Quay Singapore

At Singapore's The Clinic, dramatic lighting by Concrete and avoKinetix transports club kids to new highs

In Singapore, where seemingly innocuous gum chewing is prosecutable, a nightclub with an explicit drug theme seems impossible. But after locals shook off the initial stun, they now escape in droves to The Clinic, a macabre, hospital-themed playground designed by Amsterdam-based architect Concrete that taps into the city’s work-hard-play-harder culture. The concept of this 6-month-old venue: a labyrinth of 13 pill-shaped rooms, each illuminated in distinct ways to heighten that room’s particular theme or “side effect,” as the architects put it. 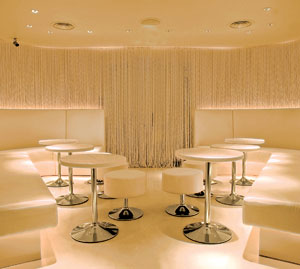 Photography: © sash alexander for concrete architectural associates
LifeBrandz CEO Clement Lee supplied Concrete with the name, The Clinic, and a desire, he says, “to push the limits in a rather conservative society.” Concrete’s imaginative designers ran with it. “Our idea is that you go to a clinic, you are sick. Here, you are already feeling good,” lead designer Joris Angevaare says. “This clinic has to make you feel even better.” Angevaare and his associates threw a handful of pills onto a blank sheet of paper, did a little rearranging, and the floor plan was born. Concrete is an old hat at the nightclub/restaurant hybrid, with its wildly successful designs for Supperclub in Amsterdam, San Francisco, Rome, and Istanbul. While Angevaare argues that The Clinic is a departure from the Supperclub format, it shares the same ambitious edginess.

The 15,000-square-foot interior is divided in two: the ground-floor bars and dance club, featuring spaces named after medicines, and the upstairs VIP lounges and restaurants, named after states of mind. The lighting, too, offers multiple layers of experience. For the club’s main space, a 730-square-foot capsule-shaped dance floor called Morphine, Concrete called in local lighting designer Jesmend Tham, principal of avoKinetix, to design a truss-system lighting rig based on Concrete’s specifications. The rig is suspended from the upstairs Delirium lounge, which forms a mezzanine above Morphine. Following Concrete’s suggestion for simplicity, Tham ringed the armature with adjustable-focus fresnel luminaires, bathing the seating of Delirium as well as the Morphine dance floor in warm halogen light.

Morphine’s main event is a massive arch lined with computer-controlled LEDs. The denseness of the LED surface—the diodes are spaced 1 centimeter apart in a grid—produces a video-like effect. Tham and Lee created the imagery for the screens, a rotating program that includes creepy Big Brother eyeballs that canvass the dance floor, and trickles of blood that eventually “drip” down the sides of the arch. The LEDs are dimmed to 50 percent “to make it a little bit more sexy,” Angevaare says.

On the Boards: Theatre School at DePaul University by Pelli Clarke Pelli