Reincarnation has long been a way of life for the Roundhouse, a cylindrical building in the Camden section of north London. When the sturdy brick structure, designed by engineer Robert Dockray, went up in 1846, it was a state-of-the-art shed for servicing and turning steam locomotives. But its great turntable, capable of carrying 24 train engines at once, came to a halt less than a decade later as locomotives became too long to fit into the 157-foot-diameter rotunda. Gilbey’s Gin, then newly founded, took over the shed, using it for the next half-century to warehouse barrels of booze. But the wild times really began after the gin-makers were gone: In 1964, playwright Arnold Wesker hit on the idea of turning the long-vacant and derelict Roundhouse into a populist performance venue, called Centre 42. 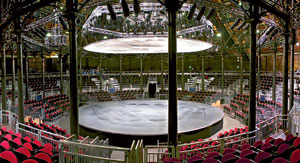 The place quickly became the raw-edged domain of experimental theater and music. Pink Floyd, Jimi Hendrix, the Doors, Jefferson Airplane, Chet Baker, David Bowie, and others commanded its stage. Later, when punk rock struck London, the rotunda was again at the epicenter. But by 1983, lack of funds closed Centre 42.

The brick-lined shed, with an interior ring of cast-iron columns and wrought-iron suspension rods soaring to a central roof lantern, lay vacant for a decade.

Then, in 1996, retired toy magnate Torquil Norman bought the property for a reported £3.9 million and, forming the Roundhouse Trust, launched plans for an upgraded performance space and, in the vaulted undercroft beneath it, a creative center for people ages 13 to 25. Norman envisioned a place that would offer, free or at nominal cost, workshops on topics ranging from radio and TV production to sound mixing, photography, graphics, circus, and drama, as well as the use of a small auditorium.

After hiring Foster+Partners to perform a feasibility study, the trust opened the project to competitive bidding to make it eligible for National Lottery funds. Through an interview process, John McAslan + Partners won the commission.

One the scheme’s most radical aspects entailed major earthmoving, giving the lower level and main performance rotunda spatially close but potentially independent entry routes. Sited on sloped terrain, the great drum had always stood with its vaulted brick undercroft submerged below grade. By excavating the south, or downhill, side of that lower story, McAslan turned the subterranean realm into the ground floor, with entry to the youth center (called the Roundhouse Studios) directly from the sidewalk. There, in the radial brick vaults that had once received ash from locomotives and later, in the building’s post-railroad era, only collected rats and stagnant water, the architect carved out a labyrinth of music practice rooms, recording studios, and editing suites.