Reina Sofía Palace of the Arts

In Santiago Calatrava’s City of Arts and Sciences, in Valencia, the Reina Sofía Palace of the Arts, an opera house, finally touches down

Aspiring to give Valencia, Spain’s third-largest city, cultural clout and a tourist magnet rivaling Frank Gehry’s museum in Bilbao, the regional government set out to develop an 86.5-acre site on a dry riverbed, midway between Valencia’s old section and its coastal district. In 1991, architect and engineer Santiago Calatrava, a native son of the city, won the competition for a telecommunications tower on that land and soon after gained the commission to develop the entire City of Arts and Sciences there. Governmental changes in 1996 prompted the decision to create the Reina Sofía Palace of the Arts (Palau de les Arts), to include an opera house, at the site’s western end, in place of the planned telecommunications tower. 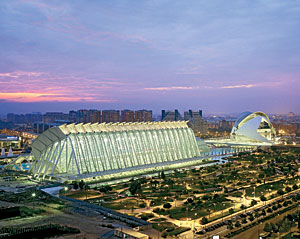 Ten years later, the $454 million, 475,000-square-foot palace, one of the last pieces in the grand scheme, finally reached completion. In Calatrava’s surreal “city” of gardens, reflecting pools, and all-white, structurally exuberant buildings of steel, glass, and concrete, the monumental opera house stands along the main axis, linking it across the vast site to the Hemispheric Planetarium/IMAX theater of 1998 (an iconic structure evoking a human eyeball, socket, and lid, all set over a 260,000-square-foot “mirror” of water) and longitudinal Prince Felipe Science Museum of 2000.

Rising to a 760-foot-long, purely gestural crest of cantilevered steel, the sculptural Palace of the Arts bears an unmistakable resemblance to Calatrava’s opera house in Tenerife. For the Valencia version, a pair of steel shells, covered in white trencadís (the traditional ceramic-shard mosaic famously adopted by Antonio Gaudí), embraces a mostly concrete structure. With a total audience capacity of 4,000 indoors, the building includes four performance spaces—most prominently, a 1,390-seat opera theater, 1,585-seat upper auditorium, and 380-seat Magistral Hall—a cafeteria, café, and restaurant, plus an open-air, 2,000-seat performance venue, sheltered only by the roof overhead.

The Transformative Power of Architecture and the Arts