In the past few years, New York City has been valiantly trying to turn around its deserved reputation for treating innovative architecture like an exotic disease that should be stamped out by courageous developers, bankers, and government officials. One solution has been to import high-design architects whose experience elsewhere can help them withstand such assaults. But the expectations of what the famously fabulous architects can do on New York’s tough turf easily become inflated, as shown in the case of The New York Times Building, designed by Renzo Piano Building Workshop of Genoa and Paris with New York architects FXFOWLE. Despite its creation of a superior workplace environment (with Gensler in charge of interiors), the new skyscraper hasn’t knocked a lot of the architectural community off its feet, whether standing near or far away. To be sure, the 52-story tower, veiled with screens of 3-inch-diameter off-white ceramic tubes over the glass-and-steel rectilinear structure, is elegantly proportioned. But it seems strangely bland in New York’s architecturally variegated context. At a distance, except under certain angles of sunlight, those ceramic rods don’t look like white, shimmering veils as much as delicate gray washboards. 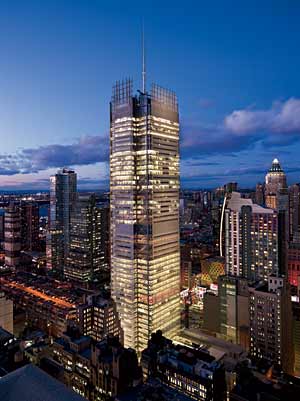 As has been observed by Times architecture critic Nicolai Ouroussoff, the building is a sophisticated sequel to New York’s mid-20th-century monuments—Ludwig Mies van der Rohe’s Seagram Building (1958) and Skidmore, Owings & Merrill’s Lever House (1952). While it certainly updates its predecessors in terms of technique and sustainability, the design doesn’t proclaim itself as an ambitious prototype of skyscrapers for the 21st century.

Ambition best describes Norman Fosters’ Hearst Tower [record, August 2006, page 74], which, aggressive and klutzy as it is, aspires to rethink the structure of the skyscraper (and even got a LEED Gold certification, to boot). Although Piano’s muter, more refined New York Times tower is so much easier on the eye than the technopornish Hearst, it lacks even the oomph of New York’s own historic skyscrapers. (Let us not forget, however, that the much-revered Chrysler Building, Empire State, and even Rockefeller Center were disdained by the architecture critics, such as Lewis Mumford and Douglas Haskell, for being unimaginative and/or crude, when they were designed in the early 1930s.)

For his part, Piano wanted a crafted, poetic, and ephemeral tower. “I’m opposed to the idea that a building should be tortured,” he says. Since he had never done a tower in New York, he wanted FXFOWLE to join him: The firm had designed other Times Square towers, including the Condé Nast and Reuters buildings. Founding principal Bruce Fowle hesitated to fall into the architect-next-door role, overshadowed by the new guy in town. Nevertheless, the two firms agreed to team up as a single entity for this project (but not legally a joint venture), with project fees divided in half and “shared” credit to emphasize the collaboration. (This sounds good, but let’s face it: Piano, chosen in an invited competition, is bestowed the fame—and the blame.) Fowle allows that Piano set the “vision” while FXFOWLE “worked out the parti and made sure the project didn’t go off track in function and cost.” The building isn’t cheap: The costs exceed $1 billion total. Since the 1.5-million-square-foot project is co-owned in a condominium arrangement with developers Forest City Ratner Companies (FCRC), the Times portion (floors 2 to 27) is expected to cost about $604 to 624 million, and FCRC’s spec space (floors 29 to 52) about $400 to 429 million. They both own floors 28, 51, and the lobby.

Piano was selected over Pelli Clarke Pelli, Foster + Partners, and reported front-runners Frank O. Gehry with Skidmore, Owings & Merrill (SOM). (Gehry and SOM pulled out at the last minute, supposedly because Gehry feared his adventurous scheme of sinuous ribbonlike vertical shapes would be compromised along the way.) The Times Company’s marriage to Forest City Ratner as developer and co-owner in the condominium arrangement had cynics rolling their eyes. How could anyone work with a developer famous for the mediocrity of MetroPark in Brooklyn? Somehow, guided by David Thurm, real estate vice president of the Times Company for most of the construction, the two owners and two architectural firms learned to deal with each other. (Still, the Times’s floors come with innovative energy-saving features that don’t appear in the spec spaces owned by FCRC, hence they decided not to pursue a LEED rating.) After this architectural baptism, Forest City Ratner, like born-again evangelists, hopes to convince New York to embrace its plus-size Atlantic Yards development in Brooklyn by dangling the Times’s almost-architect, Frank Gehry, before Brooklyn opponents.

The new Times site extends between 40th and 41st Streets along Eighth Avenue right across the street from the scuzzy, Bladerunner-ish Port Authority Bus Terminal. Since the 79,000-square-foot parcel of land fell into the 13-acre urban-renewal zone of the 42nd Street Development Project, run by the Empire State Development Corporation, developable air rights were predetermined. But the lessees of the site did enjoy tax breaks and condemnation powers that came with this parcel—although it still couldn’t avoid delays by lawsuits from previous property owners.

While the location is not too far from the former Times building on 43rd Street, the difference, architecturally, is worlds apart. The 43rd Street building is a gloomy pile that housed newspaper operations since 1913, when the Times Company grew out of its famous slender tower on 42nd Street, designed by Cyrus Eidlitz in 1904. The new Times tower, a slim, a rectilinear steel frame pulled to the edge of Eighth Avenue, is attached to a low-rise, four-story structure that wraps around a courtyard and is itself topped by a skylight. Piano wanted the tower to dematerialize as it looms to its 52-story height: Since the screens of rods don’t wrap around the shaft’s corners, the corners are notched to expose (with the help of intumescent paint) the frame of beams, columns, and tie rods (see details, pages 114–15). The facade continues above the top floor enclosing mechanical spaces in a rigid but feathery sort of way. There, Piano is designing a private roof garden, where he hopes trees will have a “visible presence.”

Dematerialization and transparency are the operative descriptive terms inside and out. As you enter from Eighth Avenue, your eye takes you past the marigold Marmarino plaster walls of the elevator banks to the courtyard, where birches are picturesquely clumped, on past the glass wall on the east. Here the red seats of TheTimesCenter auditorium terminate the vista. Above, the low-rise structure, the home of the famous newsroom operations, functions efficiently as a fish bowl allowing reporters, the copy desk, and editors to see and work together. Open red stairs in the corners of the tower and in the newsroom allow Times staffers to run up and down a floor or two without having to use the elevator. Here, too, you find tables and chairs for informal conversations, and around the core, glass-walled private rooms for work or meetings—necessary features often at a premium in typical open offices. Let us not forget the double-height cafeteria, where views, light, and culinary fare compete honorably with the trend for media companies (e.g., Hearst, Condé Nast, Bloomberg, and Fairchild) to provide staffers with designer dining spots.

While the dependence on an open office maintains the quality of light and view, a hierarchy does exist in desk arrangement, size, and placement of offices, of course. The section editors usually sit in cubicles nearest the perimeter windows; reporters sit in cubicles between them and red-walled elevator cores; top editors occupy glass-walled offices around the core; while Bill Keller, executive editor of the Times, has a glass-walled office that also abuts a glazed perimeter wall. (Shunning an all-clear-glass office, he has installed a screen of translucent glass there, as well.)

The copydesk personnel got the short shrift in the scheme of things. Since they have to be in only certain hours to get the prose fit for print, their cubicles, while near reporters, editors, and production people, are much smaller, and without cherrywood partitions. The plastic laminate desks look weirdly Lilliputian.

The slenderness of the ceramic rods and their spacing brings glimpses of the city right into the office space while cutting heat load 30 percent and energy costs 13 percent. To further reduce heat gain and glare, the architects worked with manufacturers to put in place automatically adjustable shades, sensitized to respond to the shifting patterns of sunlight. In fact, the architects, electrical engineers, and lighting designers visited the Building Technologies Department at the Lawrence Berkeley National Laboratory at the University of California, Berkeley to look into its research on “dynamic lighting.” Subsequently, the Times built a mock-up of a southwest corner office, to see how all the various products and technology to control light would work. Underfloor air—the largest installation in Manhattan—resulted from more research and another mock-up. By placing air vents under raised floors, the building brings in air cooled to 68 degrees in adjustable low-pressure vents near workstations. As it heats and rises, air goes out via return vents in the ceiling. Carbon-dioxide sensors can spur an increase in fresh air when necessary.

All in all, it is hard to fault the building as a workplace: It does have so much light, so much space, even “pink noise” to muffle voices. We journalists working for media corporations in more down-market quarters can only sigh. Or we can tsk-tsk about two incidents of wind apparently cracking and breaking those evanescent glass windows on four different floors in December and January. And we can wonder about ice falling off the horizontal ceramic rods on the tower’s north face in December.

We prefer to take the optimistic view that these kinks will be ironed out in time. For one thing, the wind off the Hudson may be diminished when the 1.3-million-square-foot tower goes up atop the bus terminal, following Port Authority’s recent sale of its air rights. Certainly, west light and view will be cut down for Times staffers within the building. But that is a situation endemic to New York: Development encourages development. Already, a 38-story tower is going up to the north designed by (guess who?) FXFOWLE, which also will cut off some of the Times building’s light and views of frenetic 42nd Street.

The irony is that the delicate 52-story tower will be less visible in the cityscape as time goes by. Right now, we still notice, however, that the fine proportions of the ceramic-rod screens make them read as corrugated gray panels from afar, except under certain sun conditions. Bigger and bolder rods would have appeared more legible, but would have impeded views out for those inside. Definitely, the rods should have been whiter, a perception that Piano, in retrospect, admits. So far, pollution hasn’t turned them even grayer; according to Fowle, the rods’ hard brittle surfaces are self-cleaning. But the windows lack this advantage, and the glazed walls placed 18 inches behind the rods take considerable effort to wash. While the Times Company has come up with a shimmering, new, see-through tower for its “Gray Lady,” in most situations, it is only a lighter shade of gray.