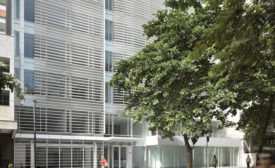 It was while visiting Rio de Janeiro in 2007 to celebrate the 100th birthday of his friend Oscar Niemeyer that Richard Meier met the clients who would commission his first ever project in South America. 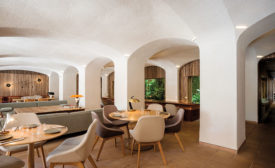 With twin political and economic crises in Brazil right now, it is hardly the best time to be hosting this summer’s Olympic Games. 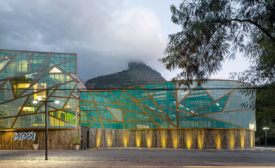 An innovative school reflects its lush rain forest surroundings and creative pedagogy through its form and materials.
Tom Hennigan
No Comments

Established in Rio de Janeiro’s northern neighborhood of Tijuca in 1973, the MOPI school was planning to open a facility in the rapidly growing Barra region to the west. 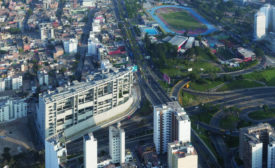 A vertical campus for a new urban university in Lima, Peru, rises to the occasion by fitting in. 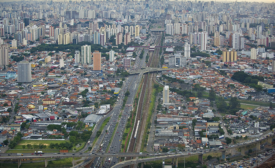 After decades spent in thrall to the car, which brought it epic traffic jams across an ever-expanding urban sprawl, the Brazilian city of São Paulo has finally decided to try something different. Image courtesy Prefeitura de São Paulo The plan calls for an overhaul of the city's building code in order to accomodate taller mixed-use buildings. Fernando Haddad, the mayor of this metropolis of nearly 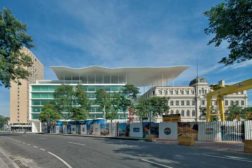 With the World Cup just weeks away, there have been many exciting developments but, overall, the results of Brazil’s makeover have been mixed.
Tom Hennigan
No Comments

These are exciting times in Brazil. Next month, the country will host a party of global proportions when 12 of its cities stage soccer's World Cup.

On building the Basiliana Library
Tom Hennigan
No Comments

Rodrigo Mindlin Loeb, with his former professor Eduardo Riesenkampf de Almeida, designed the Brasiliana Library at the University of São Paulo, which houses the collection of rare books on Brazilian history and culture donated by Loeb's grandparents Guita and José Mindlin.

A proposal for the headquarters of nonprofit organization Jongo Da Serrinha will transform a warehouse into an education and cultural center in the Morro da Serrinha favela.
Tom Hennigan
No Comments

Pedro Rivera is a graduate of the architecture program at the Federal University in his native Rio de Janeiro.

Tom Hennigan
No Comments
On public works projects Photo © MMBB Arquitetos Urban Project for Antonico Creek reconciles a S'o Paulo favela and its area's waterways. Marta Moreira is one of the founders of MMBB Arquitetos in São Paulo. Formed by a group of university friends who worked for a time under Eduardo de Almeida, the studio is one of the leading lights of the post-dictatorship generation of architects and is known for the high quality of its public works projects. “The way we typically work at MMBB, with projects such as Jardim Edite (a multi-tower public-housing project in a central business district that
Read More
Previous 1 2 3 Next
Subscription Center
More Videos