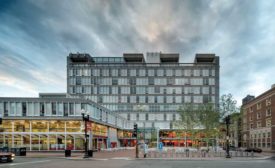 In Massachusetts, a university reimagines a prominent Brutalist building to create a public front door.

Joann Gonchar, FAIA
No Comments
At Princeton University's new Frick Chemistry Laboratory, dedicated in April, a highly efficient lighting scheme is one of several tightly integrated strategies that contribute to the building's ambitious energy-saving goals: Frick is designed to use 24 percent less site energy than allowed by the 2007 version of ASHRAE 90.1 standard. This building's configuration is a product of both environmental and programmatic goals, according to its architects, London-based Hopkins and Payette Associates of Boston. The 265,000-square-foot structure has two four-story, largely glass-enclosed wings'one on the east for research and another on the west for offices. The pieces are joined by a
Read More

No Comments
A four-story, 239,992-square-foot building for Princeton University's chemistry department, with research and departmental labs and a 256-seat auditorium in the basement, teaching labs and a café on the ground floor, and research labs on the upper three floors.
Read More
More Videos