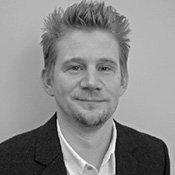 Photo courtesy Weathers
Like many architects, Sean Lally is concerned about climate change and how his profession can help address the immense environmental pressures bearing down on the globe—he just has a very singular vision for the solution. With a background in landscape architecture, Lally, 41, is pursuing a field of design in which steel, wood, and concrete are replaced by energy: electromagnetic, thermodynamic, acoustic, chemical. Rather than simply seeing energy as fuel, he treats it as the next inevitable building material, “the 21st-century version of steel and iron.” As a simple example, Lally, who founded his firm, Weathers, in 2006 and is an associate professor at UIC’s School of Archi­tecture, likes to point to the streetlamp, an important if banal piece of street and park life, safety, and commerce. But the cone of light from a streetlamp is its own architecture, he says. It has a shape with definite borders, an aesthetic, and an interior. It also controls activity, by dictating what can be done and seen when it shines in the dark.
“My interest is looking into outdoor space with energy as the material,” says the architect, who published a book in 2014, with Lars Müller, dedicated to his philosophy, The Air From Other Planets: A Brief History of Architecture to Come. To that end, Lally has conceived a number of conceptual projects, such as EOS (2014), in which—combined with advancements in bioengineering and wearable technology—human beings would be able to inhabit spaces made of cones of light and walls of energy. For the Biennial, Lally expands on this idea, exhibiting models, energy-simulation drawings, and photographs. “I don’t have any question or doubt that this is where architecture needs to go,” says the architect. “And we can actually inform the direction it’s going in.”
Back to Chicago's Next Generation