Established in 1787, Franklin & Marshall College traces its lineage to Benjamin Franklin and three other signers of the Declaration of Independence. So it has roots in revolutionary thinking, though its leafy campus in south central Pennsylvania strikes a more peaceful, pastoral note today. To prepare for his interview for the job of designing a new visual arts center at the college in 2015, Steven Holl created two watercolors expressing different approaches to the project, each referring to distinct aspects of the school’s heritage. One showed a brick edifice firmly anchored to the ground like many buildings on the campus. The other depicted a lightweight structure hovering above the land like a kite and responding to the large-diameter trees on the site with a scalloped facade curving around them. 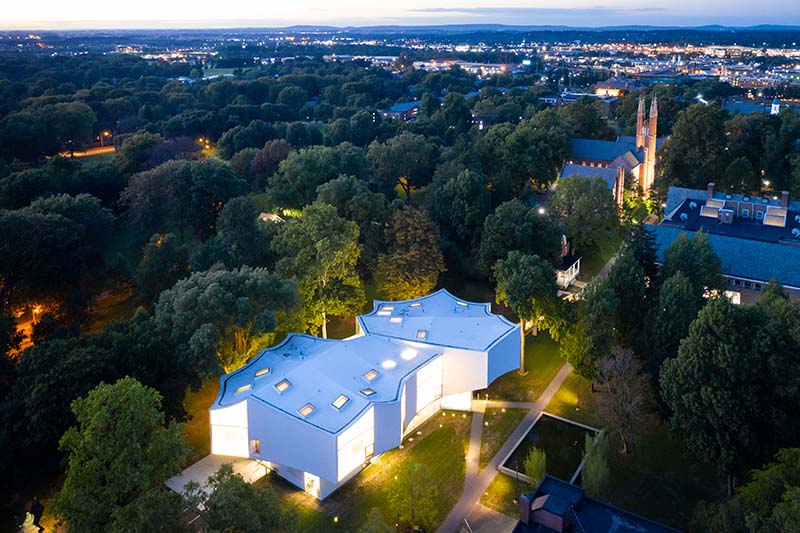 The 32,000-square-foot building sits at a pivotal location with the historic part of campus to the north, the town to the south, and Buchanan Park to the west. 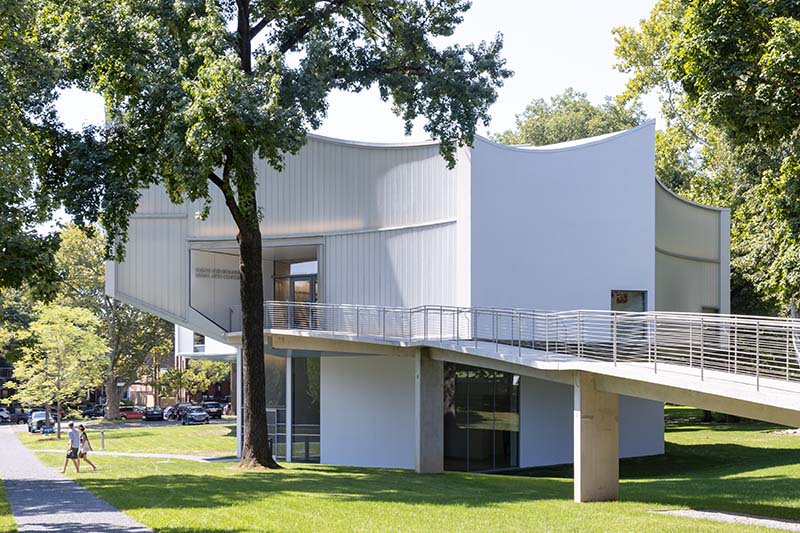 The building curves in plan and section in response to trees on site.

“There are trees on campus older than most of the buildings,” says Holl, explaining his strategy, which kept every tree on the site. He saw this more radical scheme as a way of alluding to Ben Franklin’s striving for breakthroughs in science, education, and political philosophy. Both Daniel Porterfield, who was president of the college, and Benjamin Winter, a New York real-estate developer who was the primary donor for the new arts center, fell in love with the more daring design and would prove to be valuable supporters throughout the project, says Holl.

Set on the south edge of the campus, the 32,000-square-foot, pavilion-like building aligns with Old Main, the 1856 Gothic Revival pile that features an idiosyncratic central tower and had been the heart of the college before new construction to the north in recent decades. “When it first opened, I bet Old Main seemed daring,” says Holl. “I wanted my building to have that same sense of looking forward.” The Winter Visual Arts Center reinforces the college’s historic axis by extending it to the south and reaching out to the town, says Chris McVoy, the partner in charge of the project. The college hopes to create an arts quad here with an eventual museum facing this new center for making and studying art. To the west, Buchanan Park spreads out just beyond the campus, and to the southeast runs West Lemon Street, which leads to downtown Lancaster. So Holl’s building sits at a critical juncture where town and gown, architecture and nature intersect. By raising the structure above the earth and wrapping a central “forum” with clear, mullionless glass, the architect allowed these opposing forces to flow through and around his project. 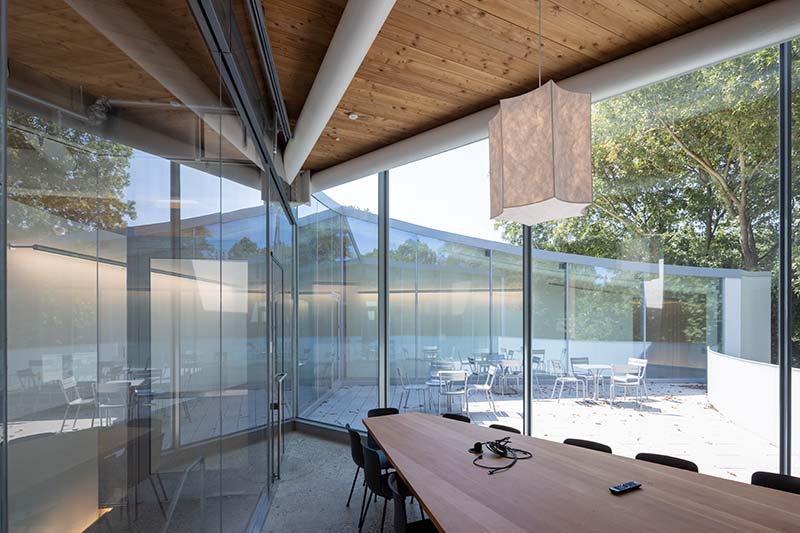 A seminar room on the mezzanine level overlooks a terrace. 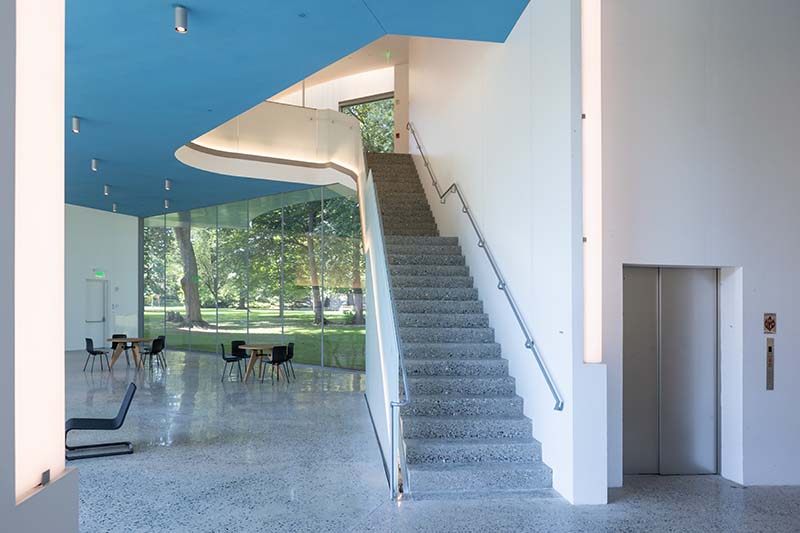 The Forum on the first floor offers views to Buchanan Park.

The three-story, steel structure rests on a pair of concrete volumes housing art studios and galleries and separated by the forum. The upper floors cantilever from an average of 16 feet to a maximum of 27 feet beyond the lower concrete walls, offering column-free space for various studios, seminar rooms, and an 83-seat auditorium/cinema. Silman Associates engineered lightweight truss frames concealed within interior walls and extending up to tubular roof beams, a system that echoes Holl’s vision of a box kite. Translucent channel glass wraps much of the building, providing soft illumination for art students working inside during the day and creating an ethereal aura at night. The rest of the building envelope is either stucco or clear glass. Less expensive than curved glass, the channel glass traces the undulating facade in vertical facets without going over budget. To reduce heating and cooling needs, the architects used a double layer of channel glass with translucent insulation in between. A reflecting pool out front adds a rippling effect to the building exterior, while also serving as a storm-water retention tank.

Walking from Old Main, students and faculty can enter the visual arts center either on the ground level or take a long, gentle ramp to the second floor. The ramp helps negotiate the drop in elevation from the older part of campus to the new building’s site, layering a man-made route above the existing topography. It also gives equal status to the first and second floors, with each hosting a “main” entrance. Bending around a large tree near the entry, the ramp may evoke that of Le Corbusier’s Carpenter Center at Harvard, but it’s different, says Holl, because it doesn’t flow through the building. 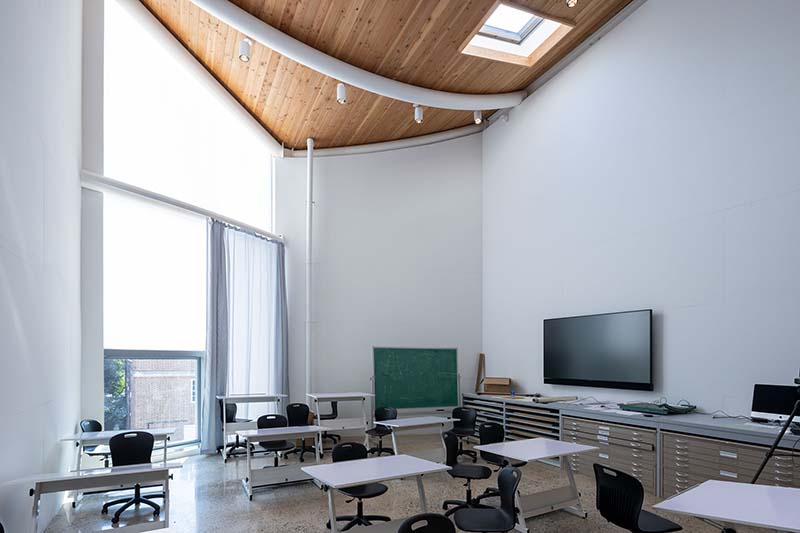 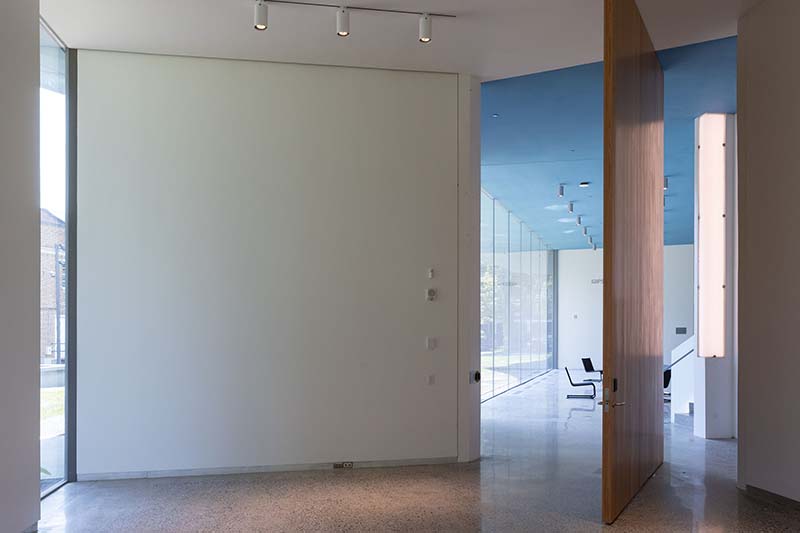 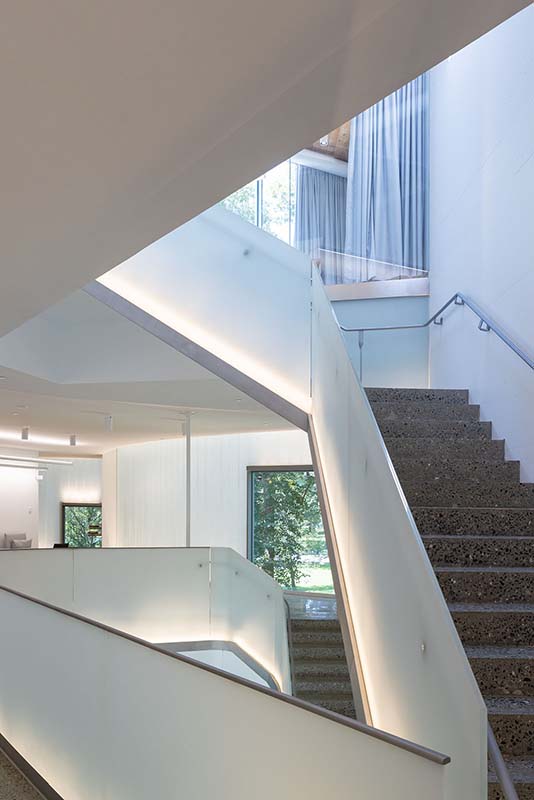 Tongue-and-groove-connected Douglas fir planks in the ceilings add warmth to the interiors but also gave local Amish carpenters the chance to work on the project (1). Sixteen-foot-high pivoting wood doors encourage easy circulation from the ground-floor Gallery to the Forum (2). Light is an animating element in the building (3). Photos © Iwan Baan.

Light is an animating element in the building with the expanses of channel glass acting as modern shoji screens, says Holl, and numerous rectangular skylights adding another source in the studios and common spaces. Clear-glass windows placed close to the floor allude to the Japanese strategy of “borrowing” scenery. “We wanted to frame particular views to the landscape below, while allowing students to focus mostly on their work,” explains McVoy. All windows and skylights are operable, creating natural ventilation throughout the building. Manipulating light through a spectrum of clear-translucent-opaque materials is a hallmark of Holl’s work, from his Chapel of St. Ignatius at Seattle University (1997) to Higgins Hall at Pratt Institute (2005) and the Visual Arts Building at the University of Iowa. 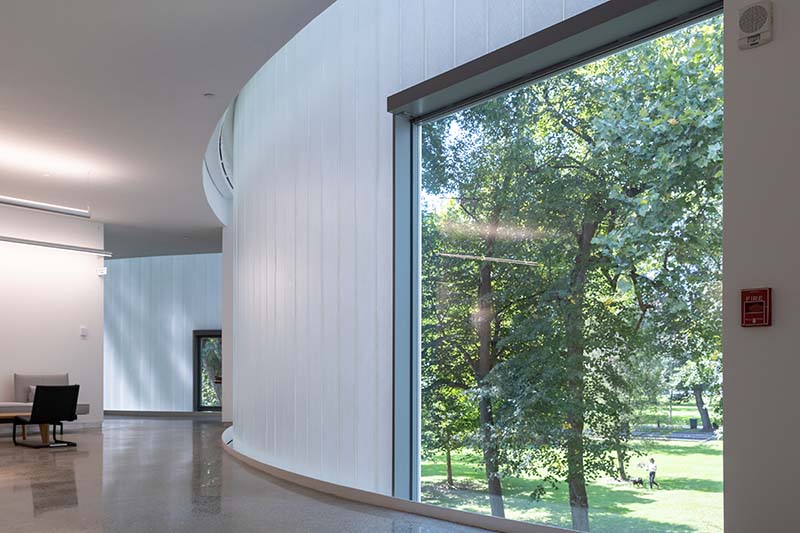 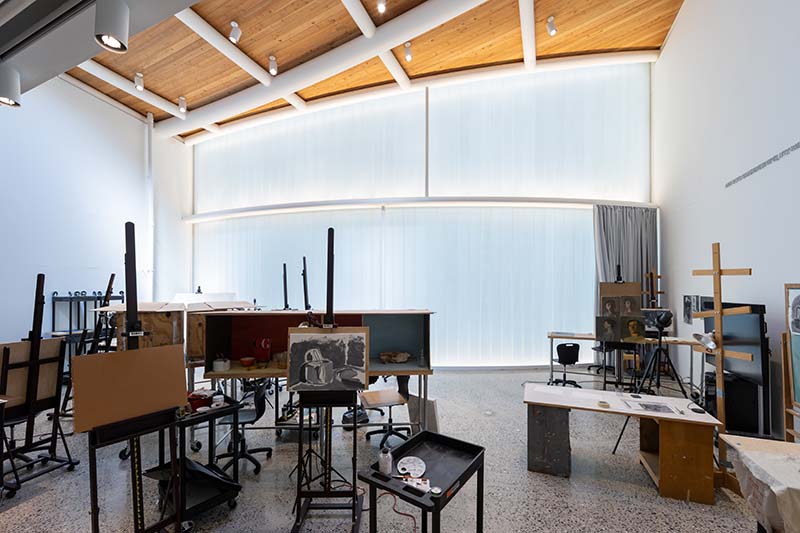 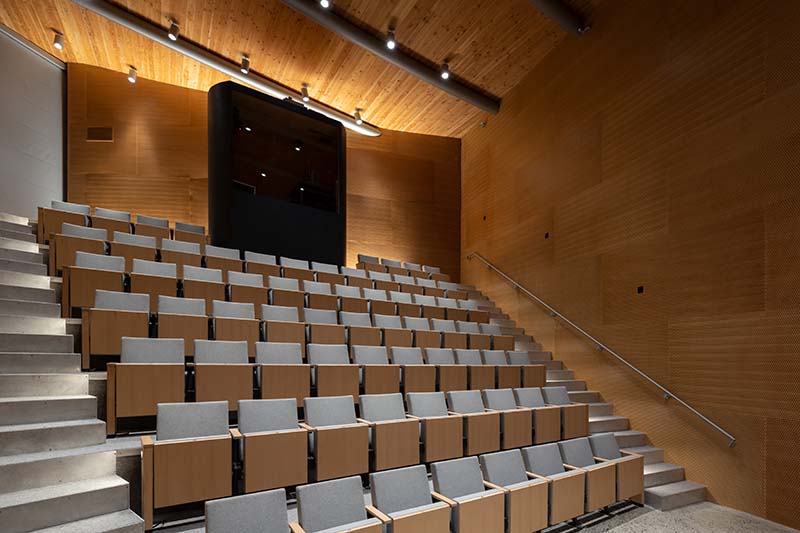 The Commons serves as a social hub on the second floor and offers views of the landscape (4). Tubular roof beams in an art studio connect with frame trusses concealed in the walls (5). A cinema is accessed on the second floor (6). Photos © Iwan Baan

Instead of corridors, a “commons” on the second floor provides access to studios, the cinema, and a darkroom while serving as a social hub. Sixteen-foot-high pivoting wood doors encourage easy circulation from studios to the commons. The architects specified tongue-and-groove-connected Douglas fir planks for ceilings to add warmth to the interiors but also to give Amish carpenters in the area the chance to work on the project. Studios on the second floor are tall spaces, rising 18 to 22 feet, allowing the design team to insert a mezzanine level with smaller studios and seminar rooms. The building opened this fall with limited numbers of people allowed in at a time, due to the Covid-19 pandemic. Its generous social spaces and natural ventilation make it adaptable to the current health situation, says McVoy. 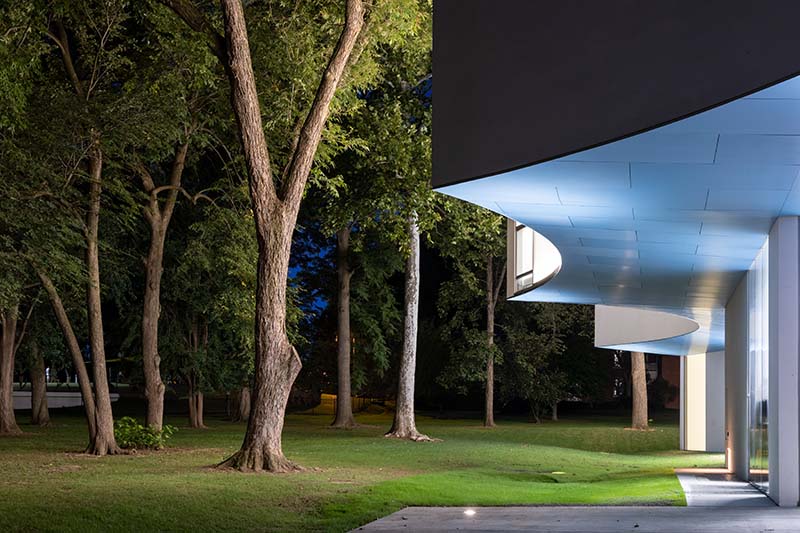 On the underside of the cantilever, the architects used blue powdercoated aluminum to give a sense of lift to the building, says Chris McVoy. The same blue was used on the ceiling of the Forum on the ground floor. Photo © Iwan Baan

Since the project could be easily serviced from his New York City office, Holl didn’t associate with a local architect and his team took charge of everything from construction documents to details such as door handles and railings. “It wasn’t quite a Gesamtkunstwerk,” says Holl, “but we got the chance to do a lot.”

Although much smaller than the Reach, Holl’s expansion to the Kennedy Center in Washington, D.C. or his addition to the Nelson Atkins Museum in Kansas City, the Winter Visual Arts Center shares a knack for integrating architecture and landscape and introducing a more organic geometry to an existing framework of orthogonal forms. Tent-like, it touches the ground lightly and welcomes both the campus and the town inside. In doing so, it points a long-established institution in a new direction.