Elegy for a Dream Queen 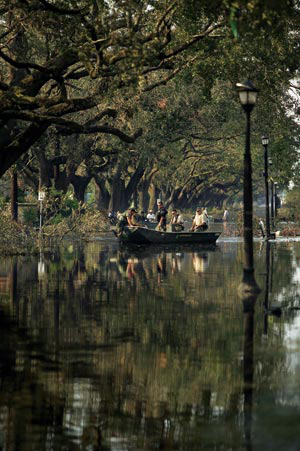 When the weather forecasters began to warn that the hurricane might take a turn up the Mississippi River, pass over our scented, magical city, then stall over Lake Pontchartrain, dumping millions of gallons of water on New Orleans, I took one look at my wife and said, "We're leaving." She was six months pregnant. So as the city hunkered into an eerie quietude, and superhuman force transformed rain into a shower of small nails, we filled up the car, locked the door, and headed up Calhoun Street, out onto the freeways, and ultimately across the causeway.

It was a harrowing journey, buffeted by winds kicking up whitecaps across the lake, the car rocking from side to side in the gray hours of the early morning exodus. Holly sat quietly in the adjacent seat, clearly petrified, but not letting on. I gripped the wheel like the helm of a sailboat and headed north, my palms slippery and warm. Little did we know that high winds would follow us 250 miles up the Interstate, reminding us of the daunting night we had just passed through, all accompanied by weather updates from the radio. Hours later we made it to the hermetic safety of my parents' home, but not without regrets.

Like anyone who has ever left the place, we felt we had abandoned the shade-filled city that normally sheltered us from the subtropical sun. No place, before or since, has so pervasively affected our emotions as New Orleans, tingeing our daily lives, and our subsequent brief encounters, with the blues: She hurt, but hurt so good. It was almost as if the city breathed, she was so tangible, so it pained us to leave.

But our evacuation didn't happen this year. The hurricane was Carmen, not Katrina, the year was 1974, and she ultimately skipped past New Orleans, as major storms had done since Betsy in the 1960s. As scores of commentators have reported, the city has been facing this reality for decades. Ultimately, my son was born, grew up, and had children of his own with no memory of our flight. Neither our caution, fear, nor feelings infected them.

This time, New Orleans's luck ran out, and there is no one to blame but indifferent Nature, with a capital N. We are all hurt, anyone who has lived there and loved the place, hurt for all the pain the current residents feel, losing family members or friends, losing homes, possessions, but all we can do today is grieve. We also sense a physical reaction to the violation of our city—cultivated, civilized, greener than imagination, rich, fading, renewing, odorous, open—God, we have all loved her.

Now, the evacuees have been forced to leave, as if a corpse were taking last gasps, as we, the survivors, look on from glowing screens. What can we do? How can we help? At this moment, still deep in the overburden of lake water, our path seems unclear, except for reaching out to the expected sources. The late Walker Percy, New Orleanian, addressed the plight of onlookers to tragedy in his book The Message in the Bottle.

However, I'm too committed to give up or to abandon feeling. While the Dream Queen may be struck down, she's been mortally wounded before by disease and fire, by war and flood. Waters will recede; she'll pull up and remake herself, not dead or dying, but ready for a fight and another dance. Like me, too many people love her. She cannot fail—only fade for a while.

The casualties, however, will not return. No one can replace a single spouse lost to flood, or quell demons haunting a traumatized child. We have to rebuild, and build better, avoiding cheap solutions, lowest bids, and graft. The vast history of the place (which looms like a form of interlocking human memory) demands it, and we are intent on restoring her to her splendid life. We'll dry her out, clean her up: She's ingrained in us.

Product Focus: Anatomy of a Dream